Experimenting Inside The Black Box

I was asked to co-teach a class that would, over the course of the semester, create a piece of devised theater around an environmental science topic. This is the last of three posts detailing that experience.

Way back during our first class, the students had a conversation about what they wanted our devised work to look like. This was before we’d read any of the literature, played any of the theatre games; before we had any inkling of what specific environmental science topic we would tackle.

Even then the students knew they wanted two things. First, they didn’t want to create a traditional play. They had no interest in creating a work that had them on stage and the audience in seats, with never the two meeting. Second, they wanted to give the audience agency.

With a month left in the semester, the students have a better idea of what they want that audience’s agency to look like. They want to recreate at least some of the process they’ve gone through in the last two months—that process of discovering just how directly their actions affect the environment. They want to allow the audience to discover that there are no simple solutions when it comes to course correcting damage done to our ecosystem.

Their solution is to frame the entire experience as two halves of an audience-driven exploration. The first half is presented as a Buzzfeed quiz that they create, upload, and start promoting to the student body. It’s short and funny—the sort of thing you can idly fill out in sixty seconds. The questions focus on the respondent’s priorities when it comes to the environment. The quiz results in one of four outcomes: Saved By Technology, Pastoral Paradise, Launched Into Space, or Sustainability. Each result represents a possible future—the one we could potentially find ourselves in if the rest of the world had the same priorities as the respondent.

The quiz then tells respondents that if they’d like to see what their potential future looks like, they should join us for a one-night only event where our class would show them.

Also there will be pizza.

I think one of the biggest lessons was seeing how few limitations the students put on themselves when approaching the creative process. They turned the audience into the main character of the piece without thinking twice. They blended science fiction, fact, and fantasy, while constantly keeping an eye on scientific accuracy. They never needed to be prompted to ask, “Why this play? Why now?” They never had to be urged to step outside the box, because they were never in it to begin with.

When the audience arrives, they discover that the evening is structured like a college town hall meeting—one that’s been called to discuss how students can forestall the environmental collapse of our planet.

Three groups then swiftly hijack the meeting, each advocating for a different path humans can take. The audience is then led throughout the theatre complex and shown how each future could play out.

If we had drawn in twenty people, we’d have been happy. It’s the last week of classes, after all. Students have other priorities.

In the first future they’re given a glimpse of, the audience allows performers to borrow their cell phones as the technology of the future begins to fail. They learn that ecological disasters in the present will ensure that no amount of technological wonders in the future will entirely plug the holes.

In the pastoral paradise future—a future where we try to reverse ecological damage by reverting to a technology-free society—we ask the audience to take part in feats of dexterity and cunning to see who has what it takes to exist in this brave new world. Not only do they agree to participate in things like the human wheelbarrow race and lobby-long obstacle course, they do so with great enthusiasm. 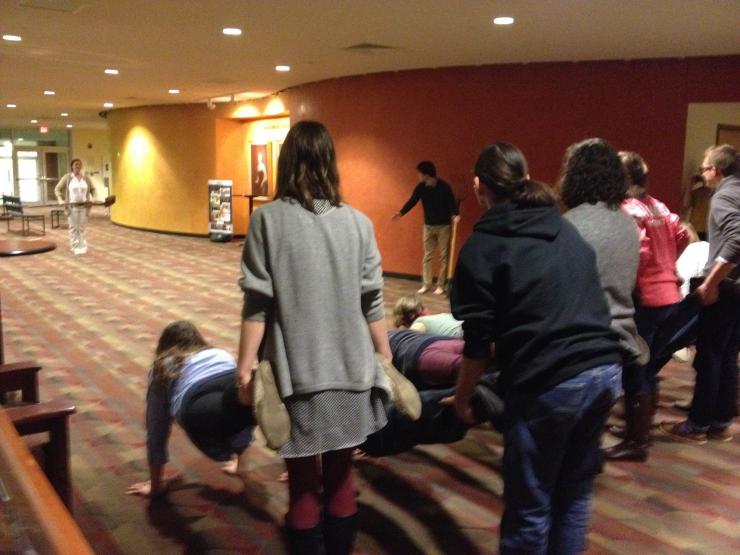 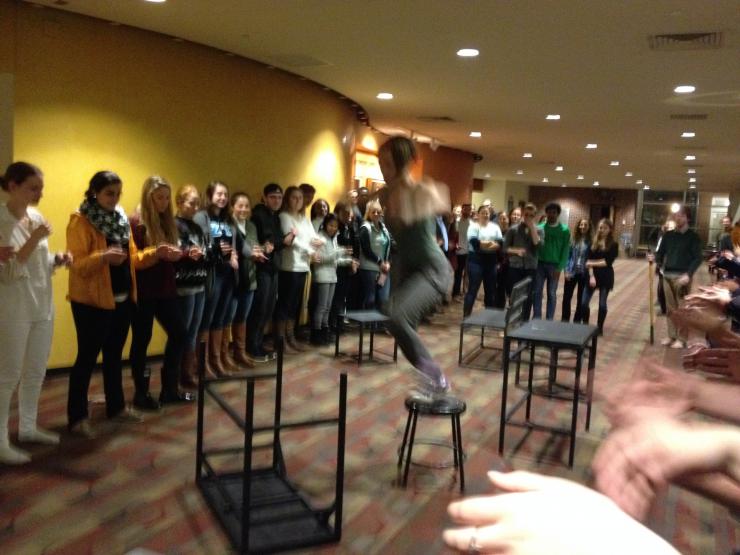 They learn, as we did, that very few people are prepared or capable of surviving in this kind of world.

When this future doesn’t pan out, we take them to the opposite extreme—abandoning Earth for space. As a science fiction fan, I’ve seen a lot of examples of this possible future. And as my co-teacher Martin Connaughton pointed out throughout the semester, it’s the least viable of the bunch—possible only with a leap in technology and accessible only to a privileged few.

After a brief lesson in how to navigate a weightless environment, audience members are segregated by how much cash they happen to have on them. Those lucky few with the most are given the opportunity to search the theatre for pre-hidden resources—food packets, oxygen bottles, a degree in Astrophysics. The rest of the audience is left stranded planet-side (in the theatre seats), where they are assigned horrible deaths—starvation, superbugs, beaten to death by a mob.

The lucky few with the resources to allow them to escape are taken up our balcony spaceship where they leave the doomed world behind for a starry future. However, they quickly learn that without a self-replenishing resource engine like the Earth, food, water, and oxygen are quickly expended. Our privileged, space-bound audience members are asked to die elaborately, which they gladly do.

Those in charge of the college town hall regain control. They explain the idea of sustainability—how moderate acts of sacrifice today can pay off with small environmental dividends in the future.

We retire to the lobby for pizza, where about half the audience hangs around to talk about what they’d just experienced. An hour later, everything is cleaned up and struck, and our semester-long experiment officially concludes.

In an open-ended devising process, this performance would be broken down, examined, and its pieces rebuilt into a stronger work. With the semester ending, we have to be satisfied with lessons learned so far.

“The very cool thing for me has been watching the science kids realize that approaching problems, issues, and ideas in imaginative and intuitive ways is not only valid but provides a whole new (and more complete) kind of understanding,” explained my co-teacher Dale Daigle. “On the other hand, I got to see the theatre kids realize that scientific rigor gives their work a clarity that it would otherwise lack. It's the classic liberal arts moment and has been a joy to be a part of."

Martin Connaughton feels the experience has deeply impacted how he views teaching: “It’s given me the opportunity to step outside my pedagogical comfort zone of lectures and labs and collaborative student-faculty research to learn something of how those in the arts teach and learn,” he said. “And it has been a wonderful experience. I learned something every week. I have been challenged to alter my approach to teaching and have benefitted greatly from that experience.”

As for myself, I think one of the biggest lessons was seeing how few limitations the students put on themselves when approaching the creative process. They turned the audience into the main character of the piece without thinking twice. They blended science fiction, fact, and fantasy, while constantly keeping an eye on scientific accuracy. They never needed to be prompted to ask, “Why this play? Why now?” They never had to be urged to step outside the box, because they were never in it to begin with.

They demonstrated that not only can art inform scientific exploration, but aiming scientific minds at an artistic process can create amazing things. As far as experiments go, I consider that an unqualified success.

What a cool project! Kudos to you and your collaborators!

American Studies scholar and educator Nassim Winnie Balestrini reports on how Climate Change Theatre Action relates to her seminar on cultural studies at the University of Graz in Austria.

Does Laughter Have a Place Here?
Aysan
Celik
Essay

Does Laughter Have a Place Here?

Aysan Celik talks about the ways she’s found laughter to be a catalyst for honest conversations with her students about Climate Change.

Theatre in the Age of Climate Change
Elspeth
Tilley
Essay

As part of the Theatre in the Age of Climate Change, playwright and educator Elspeth Tilley discusses the benefits of bringing collaborative creative activism into the classroom.