Affect in the Performance of Misa Espirituales

The 2014 Association for Theater in Higher Education (ATHE) conference posed the notion of “dreaming” as its thematic hub, a notion that took root in the soil where the conference was held: Arizona, the cradle of virulent anti-immigration laws, a plight mostly focusing on Central American and Mexican undocumented persons. Taking a cue from the Cuban-American novelist, Cristina Garcia’s Dreaming in Cuban, a multidisciplinary panel of six greater Cuba scholars expanded the field of Latino studies by covering contemporary performance, espiritismo practice, historiographies of acting technique, avant-garde theater, and dramatic criticism. The panel was entitled "Dreaming in Cuban: Interpretations of the Body in Dance, Ritual, Theater, and Performance," co-chaired by Kimberly Ramirez and Eric Mayer-Garcia. Much of the conversation approached the paradox of the performer's body as the source of "dreaming," as well as an axis upon which the Cuba dreamt in performance touches the material world. The idea of this ensuing blog is to keep the conversation going for those who were there and to introduce those who were not present to this exciting dialogue on Cuban performance. —Teresa Marrero.

As a folklorist interested in community performances, spirituality, and Latinidad, I participated in the ATHE panel, Dreaming in Cuban. Our panel discussed issues of trauma, pain, memory, and performance in various manifestations of Cuban and Cuban diasporic thinking. The conversation moved from the work I do on bodily remembering in Afro-Cuban religions, to how theaters of Cuban exile also participate in a bodily remembering that engages pain through a recalibration of the senses, time, and limitations of the body. One of the main registers most of the panel discussions touched upon was how the construction of new worlds of social possibility is achieved through the destabilization of “normalized” bodily practices. Whether it is race, place, ethnicity, or personhood, Cuban and Cuban diasporic performances push the boundaries of linear logics of the body towards a tapestry of experiential becoming. Here, I would like to offer my experiences and reflections of this kind of world-making practice from my fieldwork with Cuban spirit mediums, or espiritistas.

In May of 2013, I visited Havana to work with spirit mediums for an ethnographic project on “interorality” and ritual. Interorality describes how narrators and audiences interact, collaborate, and help construct the meaning of narratives in especially live, verbal performances. We performed misas espirituales (spiritual masses) in the neighborhood of Mantilla. After performing sets of prayers and songs, the spirit guides arrived. The spirits who came and gave counsel included a range of beings: a departed grandmother, Afro-Cuban palera/os (Congo-based religious practitioners), a Spanish gitana (gypsy), a monja (nun), a Native American, a spirit guide associated with the oricha Elegua (trickster deity of the crossroads), and a spirit guide associated with both the Catholic saint San Lazaro and the Lucumí oricha Babalu Aiye.

Spirit guides appearing at misas associate side by side, often as redobles (doubled pairs), that co-exist with each other and with the living. Redoble spirits in a misa create complex cultural and religious textures that touch the mediums through the senses. There are several meanings of the word redoble—to reinforce, intensify, re-double. These multiple meanings come into play in looking at the various ways spirit guides stand next to each other in Espiritismo. None of them are completely merged into one image, but act as separate yet connected forces that reveal themselves to the material world in different acts that are felt, especially in the body. As spirit medium José Casada clarifies in one instance at a misa in Havana: 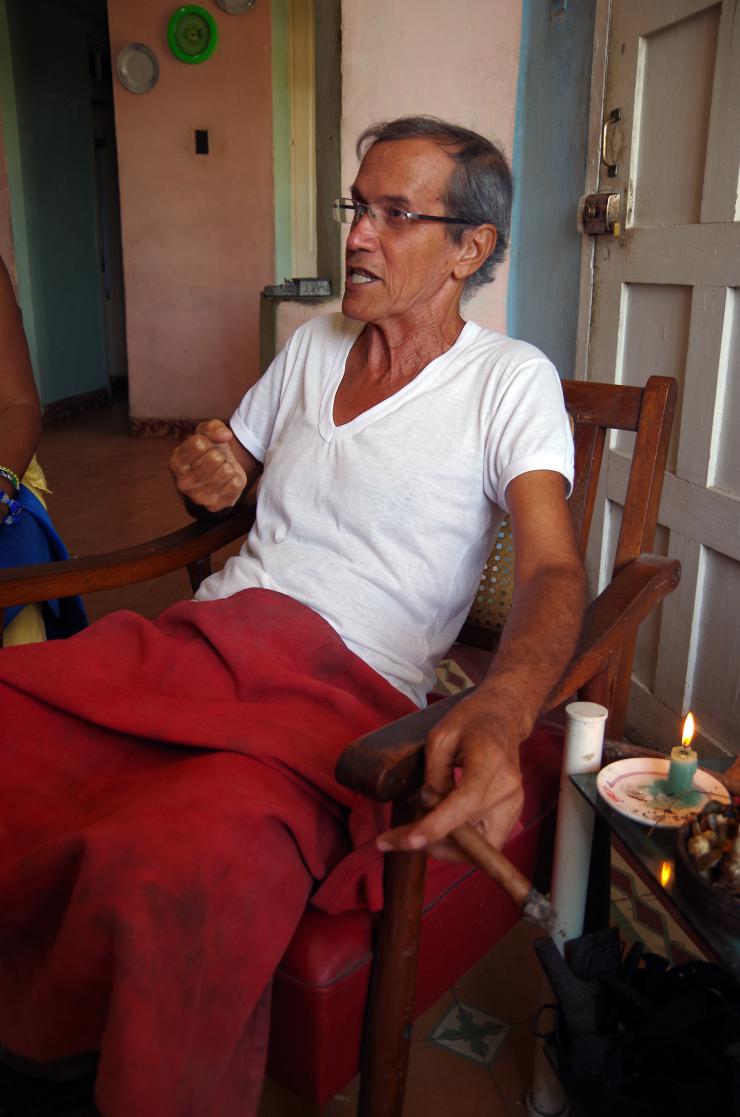 And don’t make a mistake. [Saying to yourself], “I have to go to the doctor because I have problems in my bones.” And, no [waving no with his finger]. You already know that it is the very act of the spirit that is your protector. [He is] Very strong. He is at the same time a nganguluero [and] appears to me as a redoble with an Indian [spirit].

Here, José Casada is specifically referring to how the medium in question suffers from pains in her feet and that it is the spirit and his redoble that are communicating with her through that very cramping. He also confirms that certain symptoms of ailments in the body may also have spiritual rather than material causes, and that multiple interpretations of that feeling of pain should be explored. In this manner, then, communication through embodiment does not solely occur through spirit possession of the head, per se—it can also be focused on different parts of the body that may hold specific meanings and intimate connections infused with cultural and historical significance.

For the protector spirit who is identified by his ritual work with Palo traditions in Cuba, the movement side by side with a Native American companion relates to historical tropes of spiritual work in nature and parallel colonialisms in the Americas. The foot as the site of their communication with the medium is connected to West African and Afro-Caribbean beliefs that see the ancestors entering their hosts through the left foot specifically, as the dead live inside the earth. The pain in the foot also insinuates a shared pain of enslavement, of the shackling of the foot being relived by the medium as a reminder of the spirit’s past life as a Congo living in Cuba. Since the spirit himself is seen as a palero who works with a nganga (a spiritual vessel for the dead), he also has his own dead he attends to and is affected by.

In thinking about the side-by-side aspects of redoble spirits, as well as the shared sensory experiences between mediums and their guides, Eve Sedgwick’s concept of  “parallel initiations” come to mind. In Touching Feeling, Sedgwick looks at the pedagogical implications of affect in Western interpretations of Buddhism. For her, the parallel initiations found in Tibetan Buddhist views of the reincarnated self apply the affect logics of “side-by-side” relational thinking to promote the construction of a “transindividual” self through spiritual pedagogies. Here, transindividual refers to constructions of the self that are multi-temporal, transcending, and touching different manifestations of the corporeal body. I would argue that José Casada’s revelation of the redoble spirits and their effect on the medium’s body relate a similar logic of affect whereby the spirits are working side-by-side to touch a specific part of the medium’s body in order to make her recognize their shared existence through both touching and feeling. 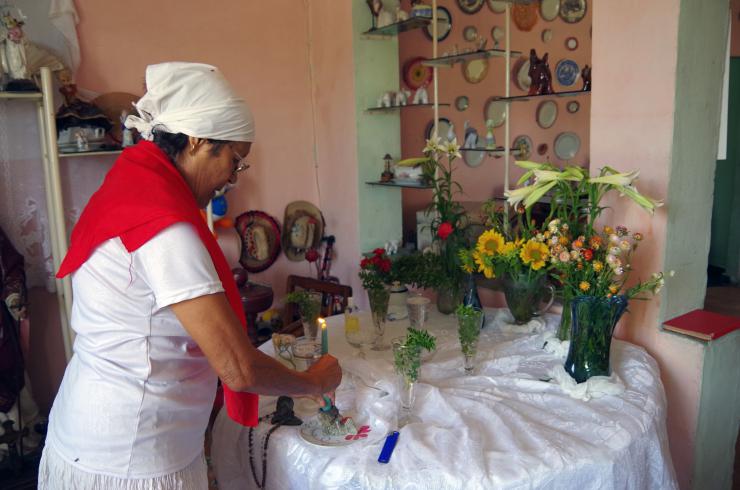 In this regard, Ramón Rivera-Servera’s view of Latina/o performatives correlates to what is happening on many levels with the manifestation of the redoble pair of the Ngaguluero (healer) and Indio (Indian) spirits, as well as with the other guides becoming known through affecting, touching, and feeling us at the misa. At the heart of this spiritual work is the challenge to see the potential for consensus building in fleeting, ephemeral moments made manifest that are also deeply reflective of social and cultural difference, contestations, and pitfalls. Espiritismo seeks to heal communities of affect through performances that do not homogenize, but rather, embrace conflictive pairings.

The Dreaming in Cuban panel at ATHE resonated with the kinds of concerns espiritistas and other Cuban communities are generating with their performative bodily practices.  Bodily pain can be sensed and re-interpreted to hold a specific, intimate message that also speaks volumes to larger traumas and silences found in Cuba’s colonial and slave past.  Innovative bodily practices test temporal and physical limitations to recovering Cuba’s history. And yet somehow community practices like misas reveal the regenerative necessity of doing this work.

Trevor Boffone, Teresa Marrero, and Chantal Rodriguez, co-editors of Encuentro, talk about the content of the book and how it can be used as an educational resource.

Excellent article, Solimar! I'm learning so much with every one of these articles from the panel I couldn't attend. Gracias, Jorge A. Huerta

Fascinating piece of analysis on an important topic, applicable to a deeper understanding of transcultural Cuban religious practices and to cultural studies in general. It reminds me of the important Afro-centric notion of the AND.... rather than the notion of either/or, so prominent in Western intellectual thinking. Reflecting upon notions of identity and affect, I am also reminded of Jose Estaban Muñoz's notion of focusing on the doing (practices), rather than descriptors of being (which create static ontological definitions). Thanks, Solimar and all of the bloggers in this series, for a wonderful contribution.... and for finally knowing what the pain in my left foot means.