Report From the Mellon Fellows, Part 1

To be or Not to be a Latino Artist? Yes, that is the question. I have this and many other questions as I accept the Andrew W. Mellon Artistic Leaders Fellowship for the Los Angeles Theater Center’s Encuentro National Latina/o Theater Festival. How big is this festival going to be? Who are the artist coming to the festival? How do they identify themselves? Will everyone be from a Latina/o background? Who will our audiences be? Will they be diverse? More importantly, how am I perceived in the greater American Theater narrative? I feel, at the start of my journey, as if all these questions will be answered, except for maybe the last one.

The announcement of the Mellon Artistic Leader Fellows picked was about two weeks prior to our first day of the fellowship. To my amazement, out of the ten Fellows, I saw that an Asian-American and African-American had received a Fellowship also! That was the first sign that we artists are moving the right direction. Now, usually I’m the first person to reach out via social media to the other artists that I’ll be working with, but in this case, it was the other fellows who reached out first. I thought, “If they are eager and excited to be part of a Latina/o theater festival then I need to step up my game and represent.” But the question remained; in which way will I be representing? Will I identify and represent as a Latino Artist or an Artist?

It’s October 1. We have a meet-and-greet introduction dinner at a very popular Downtown L.A. restaurant called The Gorbals. I have to admit I was a bit nervous that first day, but being a pretty big Foodie, I found I was actually in my comfort zone. I’m enjoying the broccoli dish with amazing company and I suddenly remember a review that I had read about this restaurant from a well known food critic. In his review, he states, “If cooking is theater, and it occasionally is, [then] what comes out of the Gorbals kitchen is the confrontational kind, food that challenges your belief systems.” This to me was the second sign that we artists are indeed moving the right direction: Here we were, on a journey to create a festival that is confrontational and that challenges all beliefs that this kind of festival was impossible to realize. At that moment I was ready, literally, to eat this festival up! 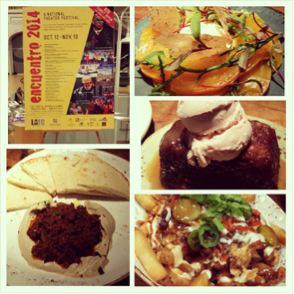 Soon after, the Fellows bond over preparations for the onslaught of over 150 artists that are to arrive. We work as an ensemble, overlooking and preparing schedules, gathering information of all the companies coming, figuring out issues, and planning events alongside our fearless leaders Jose Luis Valenzuela (JLV), Artistic Director of the Latino Theater Company at the Los Angeles Theater Center (LATC), and Chantal Rodriguez, Program Director of the LATC. 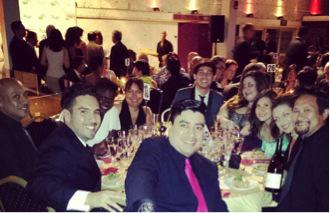 On October 12 it begins. We have a quick lunch and drink together and we all start leaving one-by-one as air carriers full of our participants descend onto LAX. Our phones let out a symphony of buzzes from texts and calls from all the artists. And as we all gather for the first time at the LATC, I realize: This is much bigger than I ever thought it would be. I stand in the lobby and I head up the stairs to take a picture and realize that I can’t get everyone in one shot. And even then,  more artists keep walking in. At this point, we are still waiting for two companies that are on late arrival. This is now, in every sense of the word, fully becoming an “Encounter” of artists. 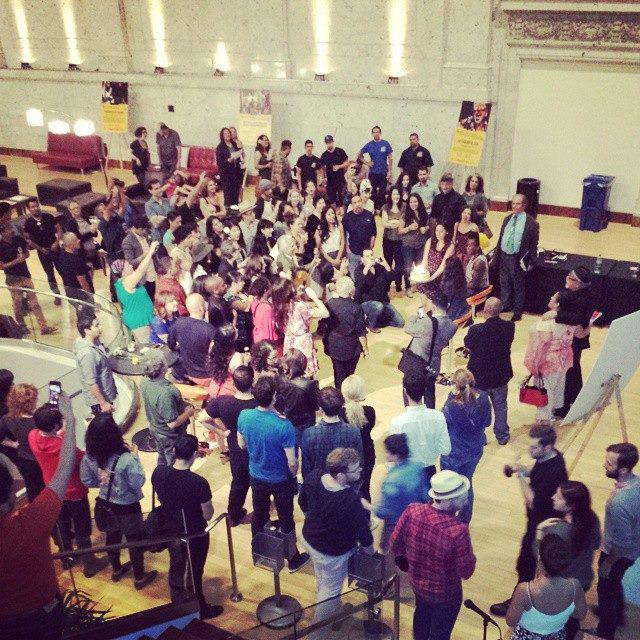 Jose Luis Valenzuela had a vision of a festival that included artists from all over the country. Through seeing his vision realized in the form of this festival, I too am realizing my own vision: To see and support the work of artists that I would not have access to otherwise. Then, something happens as JLV reads the Encuentro Manifesto welcoming all these beautiful people. In his Manifesto, he answers my question: How am I perceived in the greater American Theater narrative? The fact that I read, write and speak two different languages; the fact that my family is an immigrant family but I was born in the U.S.A.;  the fact that I’ve chosen to be a member of two theater companies (Company of Angels, Independent Shakespeare Company) that use the word “diversity” in their mission statements; the fact that I enjoy watching theater in languages I don’t speak and enjoy eating food from all cultures; To me, every single one of these traits make me a Latino, make me American and make me Global. I am Latin American Theater, I am American Theater and I am Global Theater. My third question had been answered. And that was the third sign that we artists are moving in the right direction; that we have something historic and significant happening here with Encuentro. And I’m so grateful to be part of it.

The State of Latina/o Theatre in Texas
Trevor
Boffone
Essay

In the first of a seven-part series of posts about Latina/o theatre in Texas, Trevor Boffone summarizes the current conversation, and outlines the questions the series will address.

About Productions has been staging plays since 1988 about historical characters like Joan of Arc and Antonin Artaud. Properties of Silence turned into an exciting flight into the depths of Sor Juana’s legacy.