Recommended
Devising Our Future
HowlRound Theatre Commons
Most Discussed
Designing Collaboration: In Search of a Taxonomy of Collaborative Methods
Emily McConnell
Most Watched
The Gathering from the CrossCurrents Festival
Wednesday 4 May to Saturday 7 May 2022
Upcoming
Livestreaming: International Exchange in a World Turned Upside Down
Sunday 22 May 2022
Essay by
Carlos
Morton

I approached the production of Properties of Silence with some trepidation. Most of the plays dealing with Sor Juana Inés de la Cruz, a Mexican born in 17th century New Spain who set standards for feminism long before the term or concept existed, turn out to be stale “museum pieces” full of poetic platitudes. As the lights dim we see Sor Juana (played by an intense Rose Portillo) in her nun’s habit sitting at a table and holding a plumed pen. The producers of this play, About Productions, have been staging plays since 1988 about historical characters like Joan of Arc and Antonin Artaud. They also produced a play about the film industry’s links to Latina/o culture in They Shoot Mexicans, Don’t They? and a theater for youth work, Evangeline, The Queen of Make Believe.

To my surprise the evening turned into an exciting flight into the depths of Sor Juana’s legacy. “The Tenth Muse,” as she was known, wrote an essay on women’s education two hundred years before the suffragette’s of the early 20th Century. Her poetry states in bold language the potency of the feminine in both love and religion.

The play opens with a brief soliloquy by Sor Juana, and then we meet a modern day real estate agent named Barbara (admirably played Elizabeth Rainey) talking on her cell phone about the sale of a house in Phoenix, Arizona of all places. What does Sor Juana have to do with this sprawling metropolis in the American Southwest? Sor Juana was also known as the “Phoenix of the Americas,” hence the connection. Somewhat tenuous, perhaps, but it was a part of Mexico up to the mid-19th century. We meet Barbara’s husband, Tom (Jonathan Nichols), who builds swimming pools in the desert. This same versatile actor also doubles as a monk named Miranda and acts as a foil to Sor Juana, clearly, a symbol of misogyny. 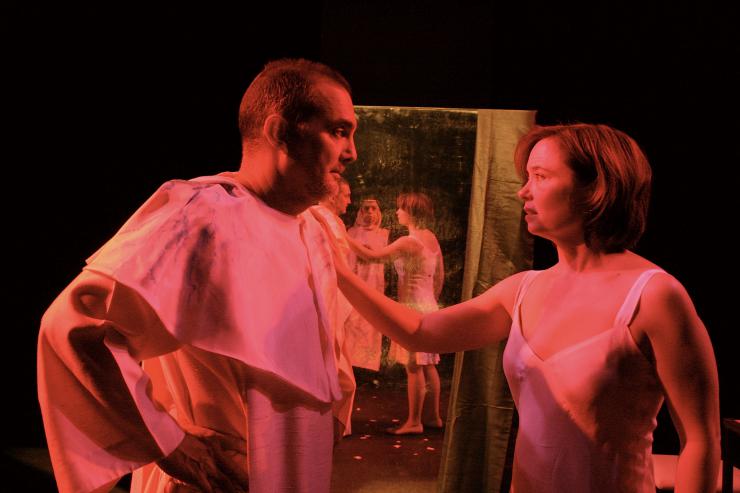 What does Sor Juana have to do with this sprawling metropolis in the American Southwest? Sor Juana was also known as the 'Phoenix of the Americas,' hence the connection.

Most readers are aware that Sor Juana’s poetry expresses a spiritual solidarity with women, a "sublime affinity" that transcends sex. That this excluded the masculine is obvious in her anti-male work, You Men, where the accused are either Don Juans or frustrated suitors "adept at wrongly faulting womankind." The pious nun got into trouble for writing a letter criticizing a member of the clergy, even though it was published without her permission. In one scene the Monk enters her cloister and starts removing books from her prodigious library. 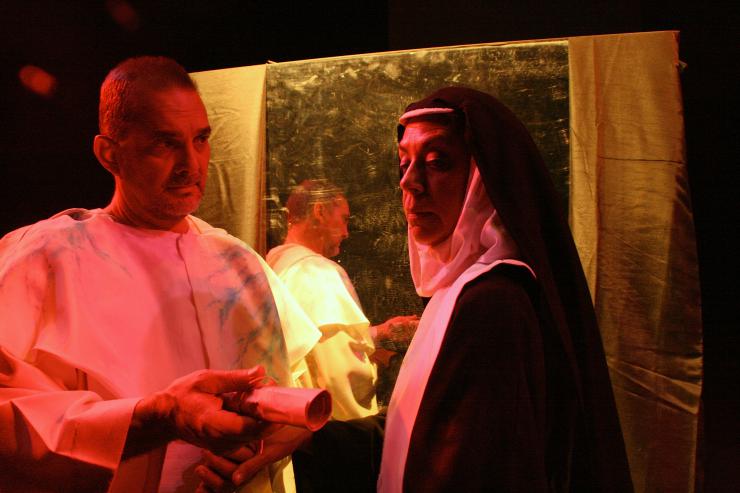 “La Respuesta” (“The Response”) is a letter she wrote in her own defense, saying, “God made me a woman. God gave me a mind. Why shouldn't I use it? Why shouldn’t I use the gifts I have been given? Sor Juana turns around the logic used by the Church to justify her oppression and subverts it into a defense for women's intellectual rights and education. This seminal work turned out to be the instrument of her destruction. Though the letter’s tone is humble, she defends women’s’ right to free speech. Her use of biblical evidence to support her call for educated women is brilliant and earned her recognition for keen rhetorical skills. “La Respuesta” also brought indignation from the Church and threats from the Inquisition. To save herself, Sor Juana was forced to stop writing and to give up her books forever.

A parallel plot is the relationship between Barbara and Tom, who is somewhat of a bully, incessantly badgering Barbara to sell commercial properties in order to make more money. In his view she is not “aggressive” enough and this causes Barbara to rethink their relationship. The play is supported in part with an original soundscape and video that appears as a black and white Golden Age of Mexican Cinema film, inspired by a poem written by Sor Juana, Primer Sueño (First Dream). There are also some marvelous stage effects including a bookcase in Sor Juana’s room that turns into a refrigerator filled with water bottles in Phoenix (after all it is a desert, and drought is a real threat). When Tom tries to take a shower, the showerhead only spews forth sand. 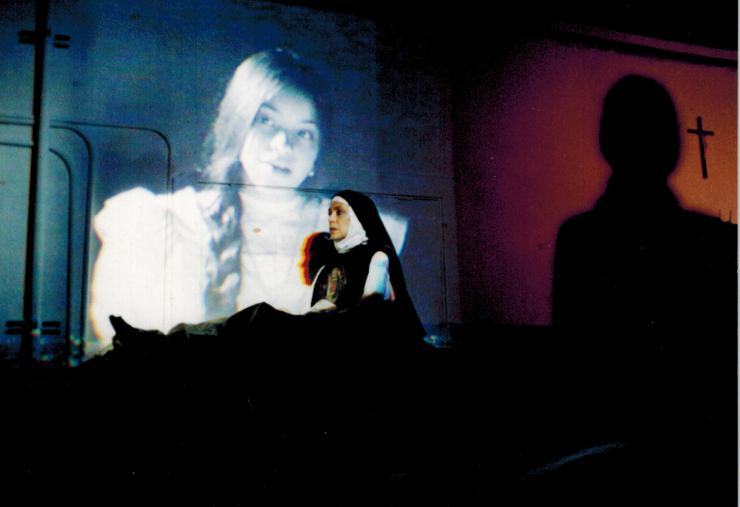 As in a dream Sor Juana magically appears in Phoenix and she and the real estate agent begin to have a “spiritual relationship.” This occurs much like the real nun had with a historical figure named Countess de Pareda, also known as Maria Luisa. In 17th Century New Spain these two women embarked on a passionate friendship that may have crossed the line of propriety for its time. Sor Juana penned titillating poetry: "That you're a woman far away is no hindrance to my love: for the soul, as you well know, distance and sex don't count." Whether Sor Juana was a lesbian by modern-day standards is not clear, and beside the point. What‘s evident is that her poetry expresses a spiritual solidarity with the feminine. That this excludes men is obvious. Barbara begins to feel estranged from Tom, telling him “I don’t know you anymore.” He tries to defend himself, but she is adamant and disappointed causing him to exclaim, “I am not your inquisitor!” Perhaps a bit of an overreach, but you get the point.

At a crucial moment, in an intimate scene between Sor Juana and Barbara, it looks like they are going to embrace and kiss, but pull back at the last moment. Contemporary playwrights like Odalys Nanín (The Countess and the Nun) have shown these two women consummating their sexual desire on stage, but not here. In Properties of Silence Barbara goes back to her husband and he, afraid he nearly lost her, tries harder to placate and understand. 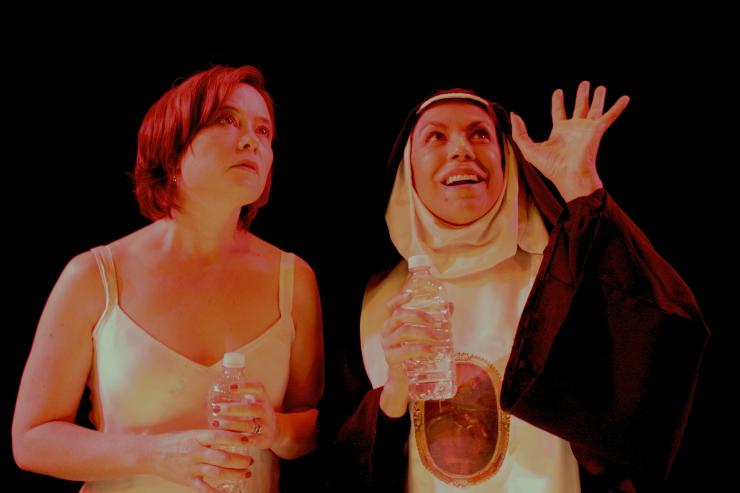 One question I had as I watched this eclectic spectacle was why the company and co-authors Theresa Chavez (who also directed), Rose Portillo, and Alan Pulner didn’t write this for a Latina/o couple in Phoenix. Would highlighting the historical connection between Sor Juana and modern day Latinas/os especially in a contentious state of affairs that is present-day Arizona resonate more? Perhaps. Even though Sor Juana had no children, are we not spiritual descendants of this archetypical Mexican feminist?

To answer the question I posed in the beginning: Is this a pertinent and important play for our time and place? Or course. Granted, this is not your typical Chicano Teatro 101. And that’s healthy and we need more experimental plays like Properties of Silence that break new ground. Was there something more to be desired? Would Sor Juana have approved? This play nicely complimented the eclectic lineup offered in the Encuentro 2014 that took place October 12 – November 10, 2014 in Los Angeles.

Festivals
Latinx Theatre
Convenings: Encuentro2014
Most Discussed
Designing Collaboration: In Search of a Taxonomy of Collaborative Methods
Emily McConnell
Most Watched
The Gathering from the CrossCurrents Festival
Wednesday 4 May to Saturday 7 May 2022
Upcoming
Livestreaming: International Exchange in a World Turned Upside Down
Sunday 22 May 2022