Recommended
Devising Our Future
HowlRound Theatre Commons
Most Discussed
Designing Collaboration: In Search of a Taxonomy of Collaborative Methods
Emily McConnell
Most Watched
The Gathering from the CrossCurrents Festival
Wednesday 4 May to Saturday 7 May 2022
Upcoming
Livestreaming: International Exchange in a World Turned Upside Down
Sunday 22 May 2022
Essay by
Holly L.
Derr

It’s a fascinating time to be a feminist in the theatre. Thanks to The Kilroys, The Count, and women like Sumru Erkut and Ineke Ceder, we’ve made incredible progress in raising awareness of the lack of equity for women in our field. Actual change has been slower than we might like, but change takes time because for many people, becoming aware of a social problem doesn’t necessarily come with the knowledge of what to do about it. Simply being “woke” isn’t enough; a newly raised consciousness requires that you also put in time and work educating yourself about ways to create change. Catherine Castellani and The League of Professional Theatre Women are curating a series asking what a feminist play is, and I’d love to build on that important conversation by also addressing how to direct a feminist production.

Feminist theatre, according to my definition of feminism, is theatre that provides an alternative not just to the male gaze but also to the normative gaze by intervening in cultural assumptions about identity, dismantling binaries, and creating equality.

First, I must offer my definition of feminist theatre. It is heavily inspired by post-structural analyses, which built off earlier feminist film theory by Laura Mulvey, who argued that the camera “constructs a specifically male viewing position by aligning or suturing the male’s gaze to that of the fictional hero, and by inviting him thereby both to identify narcissistically with that hero and to fetishize the female (turning her into an object of sexual stimulation).” Feminist theatre theory, accordingly, identified ways to disrupt the male gaze and avoid objectifying women by making the female characters subjects rather than objects: In order for the audience to see the world from their point of view, women characters have to act rather than simply be acted upon.

These feminist theatre theories were also shaped by the prevailing feminist thought of the time that there are more than two sexes of people and no one, normative way to combine sex, gendered behavior, and sexuality exists. Accordingly, feminist theatre has long sought to disrupt the male gaze by dismantling the binary of man vs. woman itself as well as the associated binaries of masculine/feminine and gay/straight, acknowledging instead that there are more than two possible identities. 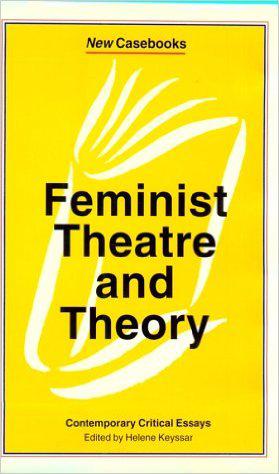 My first feminist theatre theory book, edited by Helene Keyssar, includes essays such as “Realism, Narrative, and the Feminist Playwright,” by Jeanie Forte, and “Frame Up: Feminism, Psychoanalysis, and Theatre,” by Barbara Freedman.

During the same period, Kimberlé Crenshaw and Patricia Hill Collins were postulating the intersectional theory that issues of sex, gender, and sexuality cannot ever be completely separated from issues of class, race, ethnicity, and all of the other identities that overlap with that of gender. In fact, due to the intersection of gender with other aspects of identity, equality among the genders cannot be achieved without also addressing racial, class-based, and other forms of inequality. To that end, my feminism seeks to dismantle not just sex and gender binaries but also the uber-binary of normative (male, straight, cis, white, Judeo-Christian, upper-class, abled, etc.) vs. other.

Feminist theatre, then, according to my definition of feminism, is theatre that provides an alternative not just to the male gaze but also to the normative gaze by intervening in cultural assumptions about identity, dismantling binaries, and creating equality.

I emphasize what feminist theatre does over what it is because even the most feminist play may not do the work of feminism—creating equality—if the process is authoritarian. Most theatres still operate along the patriarchal model in which a single person sits at the top of a hierarchy and controls, if not all of the decision making, then at least who gets to be involved in the decision-making. But presenting the world from a non-normative perspective requires the inclusion in decision-making of non-normative perspectives. 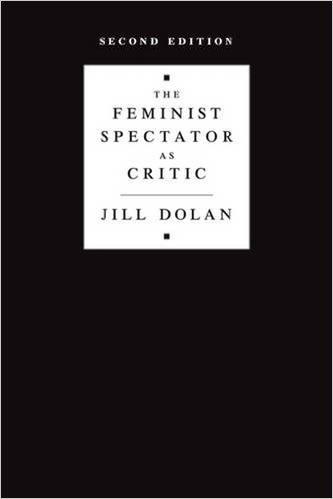 Jill Dolan’s Feminist Spectator as Critic was my Bible when I began teaching feminist theatre. Her distinctions between liberal, cultural, and materialist feminism and her strategies for reading the politics of performance have deeply informed my understanding of the difference between a subject and an object.

This is why feminist directing begins with the process of casting and selecting the rest of the artists for the production. Working with as many women as possible is obviously key, but so is creating diversity and avoiding casting that reinforces inequality. A feminist director, for example, cannot choose to do a Latinx play and then not cast Latinx actors or hire any Latinx artistic staff, as that would result in a production in which the world is presented only from the perspective of a white gaze that fetishizes, rather than represents, Latinx culture.

To be inclusive, a feminist director’s vision has to be more malleable and permeable than some artists are used to. In What’s the Story: Essays About Art, Theatre, and Storytelling, Anne Bogart talks about the difference between the director’s job and the actor’s job: The director’s job is to direct the play; the actor’s job is to direct the role. This means that just as the director must have a vision of the whole, the actor must have a vision of how her role can be played. (I would add that the designers must also direct the design.) The director’s vision, therefore, must be strong but flexible enough to encompass to the actors’ and designers’ ideas.

A vision that adapts to the ideas brought to the table by each member of the team exists in a state of “dynamic equilibrium” in which balance (equilibrium) is maintained through the ability of the director to shift (be dynamic) in relation to the constantly shifting circumstances in which she is working. Fear of destabilization can often make directors say no to the ideas of others, but a vision built on the idea of dynamic equilibrium can adapt and expand to include big ideas that come from actors and a designers without losing its center. 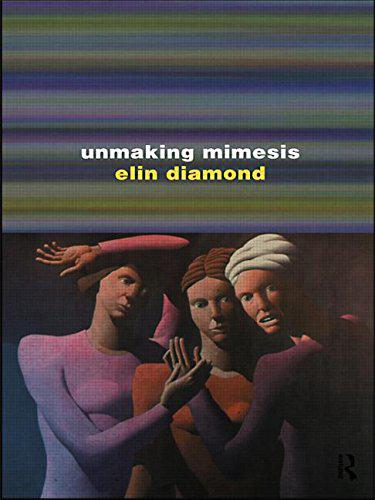 Elin Diamond appeals to my love of Brecht by using his theories to postulate a feminist theatre that makes familiar gender norms seem strange and strange ideas about gender seem familiar.

Maintaining dynamic equilibrium is difficult. In reaction to an overwhelming number of vastly different viewpoints, a director might understandably compensate by going too far in the direction of fidelity to her original idea. Or, in response to a plethora of great ideas, a director may lose sight of an original vision that would have been worth maintaining.

Dynamic equilibrium is also a challenge when not every artist responds well to having to “direct their role.” Young artists in particular might feel less inspired by the freedom to try their own ideas than terrified of the abyss that has thereby opened up in front of them. In the excitement of not only coming up with my own ideas but also being inspired by everyone else’s, I sometimes fail to notice the team member who is not excited, not coming up with her own ideas, and/or not feeling that her ideas would be accepted should she try them. An ability to hear that person despite her silence, to see her despite her fear that she is invisible, is a difficult to develop but important skill for a feminist director to have. 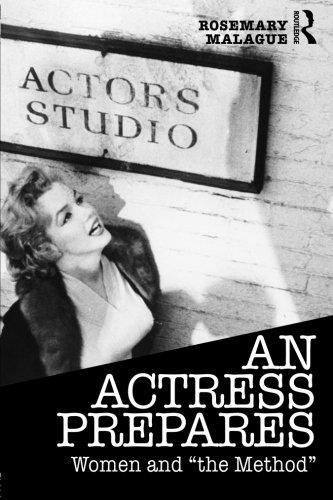 Rosemary Malague’s more recent An Actress Prepares: Women and “the Method” details the historical and contemporary ways the Method puts women in the control of dominating directors and turns them into over-sexualized hysterics.

To that end, the most useful manual for directing I have read recently is not a theatre book at all: It is Daring Greatly, by Brené Brown, recommended to me by playwright Jami Brandli. Brown’s research into shame identifies the defenses that people commonly employ when they find themselves in a vulnerable position, such as being asked to try their own artistic ideas out in front of other people, helps readers get beyond their own defenses, and teaches them to identify and empathize with other people who use them. Now that I can tell when a collaborator is having a hard time jumping into the abyss, I hope that I can be more present to her in the moment and more willing to be vulnerable myself.

Because the overall mode of the feminist director is to empower artists to make their own choices, when dealing with scenes that include violence, sex, or nudity, a feminist director has a responsibility to get consent from participants at every step of the process. The human body sometimes does not know the difference between real violence or sex and the mimesis of violence or sex, meaning that staging those moments requires particular attention to the safety, both physical and psychological, of everyone in the room. Using trained fight choreographers, mindfully choreographing sexual moments while repeatedly seeking renewed consent as the ideas evolve, and checking in with actors about how they are doing are tools directors can use to make theatre in a feminist way.

Gender
Directing
Most Discussed
Designing Collaboration: In Search of a Taxonomy of Collaborative Methods
Emily McConnell
Most Watched
The Gathering from the CrossCurrents Festival
Wednesday 4 May to Saturday 7 May 2022
Upcoming
Livestreaming: International Exchange in a World Turned Upside Down
Sunday 22 May 2022

Hey Holly, thank you so much for this! I am working on a presentation about Feminist Theatre (Origination, Purpose, Conventions, Stagecraft, Influence) If you know any good sites I could use to research the topic that would be amazing. There isn't too many educational sites out there on the genre.

Thanks, Holly. This is really clarifying and insightful. I hope you follow with more.