A Thing of Unknowable Depth

This four-part series explores the pursuit of yugen in theater.

I have been terrified to even put down the word 幽玄. I had to ask Google to write these characters for me. According to Google Translate, yugen means “subtle and profound.” Looking at the unfamiliar characters, I would have guessed “ghostly.” For the first time in decades, I looked for the Japanese dictionary that I brought with me when I left Japan alone at age sixteen. It was on my bookshelf having survived many moves. The first definition of the word translates (roughly) as “a thing of unknowable depth,” and ironically, the second definition remains unknown to me because I don’t know the key character in it. I could only make out “infinite experience.” 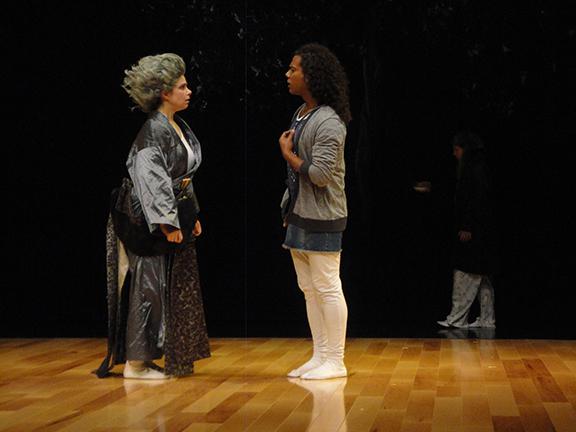 No one could have guessed that six months before this downstage-left-moment, the board of the Theatre of Yugen had communicated their intention to fire Jubilith as artistic director at the end of the season. On stage, there was nothing in her presence that signaled the hardships she had withstood to make this moment happen. 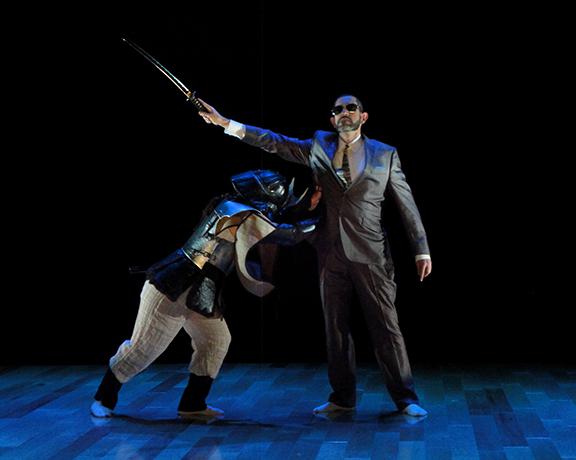 This Lingering Life is ultimately a play about the concept of karma as I understand and love it— life is not driven by an entity outside of us, but by cause and effect of our own making. And it’s not linear! It is cyclical, which refers to reincarnation in Buddhism, but I envision huge overlapping circles where stories land propelled by karma from who-knows-how-many-lives-ago. This is much more theatrical than the idea of the unconscious mind—instead of limiting life to this one round of existence, karma builds human experiences on forgotten actions and thoughts, time-traveling past, and shape-shifting present. (I apologize to Buddhist scholars for my creative interpretation. I mean no disrespect.) It’s my hope that Jubilith would look back at this juncture of her life and know that she was released into a bright future of directing and performing.

All original Noh plays are tragedies of ancient Greek magnitude, but my play is like a zany attempt at arguing with Beckett: You're on earth. There must be cure for that (In Endgame, a character says, “You are on earth. There’s no cure for that.”) Jubilith decoded nine Noh plays that I buried in This Lingering Life and released the twenty-eight nameless characters into recurring lives while creating an abode for them to live and die in. And they lived and died, lived and died, reaching for spiritual release within the roles already released from the pages, yet still trapped in theater. It was horrifying and funny. Despite my messing with the sacred canon of Noh, Jubilith’s subtle and profound approach created a true flower, as Zeami, the father of Noh Theater, might have called the production, had he reincarnated and attended Z Space one evening in June.

Jubilith is a strange and special theater artist. She had dedicated twenty years of her theatrical life to learning and training Noh Theater and its performance technique. “I haven’t done Western style acting in fifteen years!” she said about playing Woman with Tragic Hair. Watching her perform this nontraditional “narrator” of the play, I felt I could stretch myself to understand yugen. I had believed that it was always inside me, perhaps dormant, slightly impaired by a severe identity crisis I endured through high school in a tragic place called Upstate New York (coincidentally, or due to karma, near where Jubilith grew up). Yugen was in my blood, a cultural license that I wasn’t particularly in need of until now. I only began to think about it after I met Jubilith.

Under her leadership of twelve years, I see that Theatre of Yugen expanded its niche mission and began working with diverse collaborators—playwrights, poets, and opera singers. And what unexpectedly became her last project as artistic director, she brought esoteric yugen to my nonlinear play in pre-prologue, prologue, twenty-two scenes and epilogue—and made a magical production of it. The tree on the stage was not an imitation of a two-dimensional painted Noh theater tree, but an actual tree that levitated upstage behind a scrim and changed colors by lighting as if seasons passed during the two hours.

This post, which concludes the Yugen series, is late. I had not been able write down my thoughts until I read Polly Carl’s interview with Julie Crosby, who has been supportive of my work even though the piece I did at Women’s Project preceded her becoming artistic director there. I find a similarity in these two women artistic directors. Their commitment and belief in the kind of theater they chose made the thought of abandoning their respective theaters illogical— Julie in theater by women, artists and Jubilith in the art of Noh and its many possible expressions. It was not their decision; yet, Julie’s interview in HowlRound was full of grace, and Jubilith left her position graciously.

This Lingering Life was performed with a racially diverse cast crossing gender and age. Jubilith was steady, never giving up on preserving the work that so many artists had already done (the project was awarded a MAP Fund grant which made it possible for Jubilith to work with the same nine actors for two years), and keeping her promise to me, to the play, to all the designers’ visions, and to her own evolving virtuosity. She proved that yugen could never be a building, a spreadsheet, or a governing system applied to artists.

I was at the Public Theater as an artistic associate of the legendary director JoAnne Akalaitis when she was fired by the board. Some years later, she became the chair of the theater program at Bard College. I couldn’t believe that in order to follow her, I had to go back to a place called Upstate. But the option of spending my life with a great artist overrode my teenage memories. (Coincidentally, or due to karma, it’s the college Jubilith graduated from ten years before I started teaching there. I’m not kidding.) JoAnne retired from teaching two years ago. Now I see her in her East Village apartment where multigenerational, powerful, and creative women theater makers from varied backgrounds gather at the women’s salon that she hosts. where I don’t know any other director who could gather such an intelligent group of women in one room. We read plays and discuss them—just like JoAnne did in the old days with her artistic associates at the Public. It feels fantastic to land at another place in the karmic theatrical circle to continue my journey with her.

The theater that made This Lingering Life whole would no longer be lead by an extraordinary artist/woman producer. I believe that Jubilith’s departure is not only a loss for me, but for the San Francisco community and the American theater. In her bighearted farewell message on the theater’s website, she makes a thoughtful comment about her exit: “…my character, Woman with Tragic Hair, says, ‘And here we are again.’ Each night I saw this line as an invitation. Each beginning, each opening, is born out of the ending, the closing that precedes it.” It’s time for me to focus on what Erik Ehn described in his Yugen blog as “Goddamn grace.” San Francisco theater artists rock, and I hope to land on a random karmic circle with some of them again in the future. But right now, I am dreaming of a new joint expedition to discover an infinite experience, everything that we could unearth about the unknowable, yugen, with Jubilith Moore.

I bookmarked this days ago not realizing it was about Jubilith. Thank you for doing her this honor and telling the truth (albeit without details) about what happened. Jubilith was one of a handful of people who helped me form another company years ago, and when she left us for Yugen, I knew that company would be in good hands, so watching This Lingering Life was a decidedly bittersweet experience for me; though I wish the company and its remaining members well, I will not be able to bring myself to see another Yugen show for some time. May the theater community recognize Jubilith's unique gifts and open its artistic doors to her soon and often. She is a giving director, a gorgeous and precise performer, a masterful teacher, and an all-around beautiful person.

A beautiful tribute to Jubilith, who graces our ground in Pennsylvania every summer as a teacher in Bloomsburg Theatre Ensemble's Noh Training Project and as a performer in Theatre Nohgaku (dedicated to Noh as a living art form, they share Noh's beauty and power with English speaking audiences). How I wish I could have seen her in your play, Chiori Miyagawa. The picture you paint of her uplifted face, shining in the lingering light, is vivid. As is Jubilith.