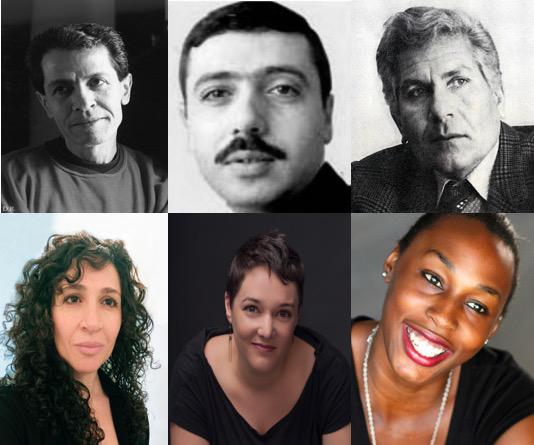 Please join us as we expand our collective knowledge of the classical canon of Arab plays. Yusuf Idris (Egypt), Issam Mahfouz (Lebanon), and Sa’dallah Wannous (Syria) are some of the Arab world’s most renowned playwrights, but are relatively unknown to the Western world. Their complex and nuanced plays address the timeless issues of power and politics in ways that deeply resonate with our own situation. This event is curated by Joy Sarah Arab (Producer) in collaboration with Marvin Carlson; dramaturgy by Salma S. Zohdi.

The Adventure of the Head of Mamlouk Jabir was completed in 1971, several months after Hafez al-Assad seized power. It was first staged in the Arab world in a production directed by the Iraqi director Jawad al-Assadi. The play is perhaps most notable for its use of a hakawati, a traditional Arabic storyteller, as a narrator in a traditional gathering place in the Arab world, a coffee house, who tells the story-within-a-story—a form derived from Eastern frame tales like 1001 Nights.

The Dictator is an absurdist classic. A minimalist mixture of Ionesco, Plautus, and Beckett, with fierce and frequently hilarious jabs at despotism in the Arab world, The Dictator was a revolutionary work when it was written in the 1960s and continues to speak to the revolutions and reversals unfolding in today’s Middle East.

Known as Yusuf Idris’s foremost absurdist work, The Flipflaps (Al Farafir) was written during a time of great change and challenge in Egypt and caused a literary uproar for two weeks in 1964 before it was banned. The Flipflaps is a two-person dialogue between a master and a slave. The slave, Flipflap, imparts Idris’s social, political, moral, and metaphysical ideas through allusions and symbols.

Yusuf Idris, born May 19, 1927, is an Egyptian playwright and novelist who broke with traditional Arabic literature by mixing colloquial dialect with conventional classical Arabic narration in the writing of realistic stories about ordinary villagers. Idris studied medicine at the University of Cairo (1945–51) and was a practicing physician in Cairo when he began to write fiction. As a committed leftist, he initially supported President Gamal Abdel Nasser’s reforms but later, in 1954, was imprisoned for opposing Nasser. Idris’ first anthology of stories, Arkhas Layali (The Cheapest Nights), appeared in 1954 and was quickly followed by several more volumes, including A-laysa kadhalik (Isn’t That So?). In the 1960s he sought to create a uniquely Egyptian dramatic form using colloquial language and elements of traditional folk drama and shadow theatre. He presented this plan in a series of three essays entitled “Towards a New Arabic Theatre,” and he tried to put it into practice in his own plays, notably Al-Lahzat al-harija (The Critical Moment), Al-Farafir (The Flipflaps), and Al-Mukhatatin (The Striped Ones).

Born in southern Lebanon in 1939, Issam Mahfouz, at the early age of twenty, quickly became involved in the movement to renovate and modernize Arabic poetry, which was spearheaded by the poets Yusuf al-Khal and Adonis. Several years later he wrote his first play, The China Tree (al-Zanzalakht), which premiered in Beirut in 1968. The China Tree, published in 1995 in the anthology Modern Arabic Drama, edited by Salma Jayyusi and Roger Allen, is the first play of a trilogy written between 1963 and 1967, which includes The Dictator (al-Dictatur), translated into English by Robert Myers and Nada Saab, and Saadoun the King (Sa’dun Malikan). The first two works were completed, but the latter was not. In 1969, the year after the premiere of The China Tree, The Dictator was produced in Beirut. The Dictator was recently revived and staged in Beirut in 2012, in a production directed by Lina Abyad, who modified the text and changed the gender of the two characters, the General and Saadoun, to female. This production was also performed in 2012 at Sharjah’s Theater Festival, where it received the award for “Best Arab Play of 2012” (the Sheikh Sultan Bin Muhammad Al-Qasim Prize). In addition to publishing four collections of poetry between 1959 and 1973, Mahfouz taught drama at the Lebanese University from 1969 to 1975, and in 1976, soon after the Lebanese Civil War began, he moved to France, where he lived until 1981. Other notable plays written after the trilogy include Carte Blanche, written in 1972, and a collection of short plays published in 1975. For the celebration of World Theater Day in 2000, he was asked to translate a play from the international repertory. He chose Striptease, a Kafkaesque one-act play by the Polish playwright Slawomir Mrozek, in which two men, an intellectual and activist, are imprisoned for unknown reasons and are eventually forced to strip. Mahfouz later adapted the play, maintaining the nucleus of Mrozek’s plot but adding elements that highlighted his own critical perspective of globalism, which had become an increasingly dominant aspect of contemporary political and economic life.

Sa’dallah Wannous, who was born in 1941 near Tartous, Syria and died in 1997, is widely considered to be one most important playwright from the Arab world of the twentieth century. He was a playwright, cultural critic, journalist, founder, and director of the High Dramatic Institute in Damascus, and dramatic theorist. He wrote over twenty plays including An Evening’s Entertainment for the Fifth of June, The Adventure of the Head of Mamlouk Jaber, The King is the King and Rituals of Signs and Transformations. This latter work was produced in 2013 in French at the Comédie Française in Paris and in English at Babel Theatre in Beirut, where it was directed by Sahar Assaf and produced by Robert Myers, Joy Sarah Arab, and AUB. The English version, translated by Nada Saab and Robert Myers with a grant from the MacArthur Foundation, appears in Four Plays From Syria: Sa’dallah Wannous, edited with translations by Marvin Carlson and Safi Mahfouz, published by CUNY’s Martin E. Segal Theater Center in 2014. The translation of The Adventure of the Head of Mamlouk Jaber used in this reading will appear in Sentence to Hope, a collection of translations of Wannous plays and other writings, to be published this year by Yale University Press’s Margellos World Republic of Letters series.

NJ Agwuna is a freelance theatre and film director, hailing from the ‘burb’s of central Maryland. Performing from a young age, NJ found herself drawn more to the directorial and technical side of theatre. In 2009 she pursued her passion for theatre, at Binghamton University, where she majored in Theatre Directing and Cinema. Some of NJ’s credits include Garbage (Director), Good Man (Director), The Duel (Director), Town Hall (Director), Truth or Lie (Director), Funeral Food (Director), Dracula (Director), Then She Fell (ASM), Roadside Attraction (SM), Amazing Spider-Man 2, Daredevil, Jessica Jones, and Punchdrunk’s Sleep No More (SM Sub). She would like to thank Joy for trusting her in the driver’s seat. She would also like to thank her family and roommate for always keeping her grounded.  www.njagwuna.com

Rania Khalil is a performance artist working in live and moving image. Her original artworks and performances have been seen in such places as The Judson Church, LaMama Galleria, Joe’s Pub, Utopia Station, HERE Center for the Arts, The Ontological-Hysteric Theater in New York,  Townhouse Gallery Cairo, Al Ma’mal Contemporary Art Foundation Jerusalem, and the 2015 Venice Biennale. Born to Egyptian parents in the US, Khalil has recently returned to New York after 9 years abroad in Egypt and Finland where she is a doctoral candidate in artistic research at the Theatre Academy/ University of Arts Helsinki. She lives and works in Brooklyn.  www.raniakhalil.co

Sara Rademacher is the Co-Founder and former Artistic Director of Elements Theatre Collective, whose mission is to bring professional quality theatre free of charge to audiences with limited access. Sara is dedicated to creating theatre to engage her community both locally and globally. She holds an MFA in Theatre Directing from Columbia University. Some favorite directing credits include The Last Five Years, Gruesome Playground Injuries, The Love Song of J. Robert Oppenheimer, Who’s Afraid of Virginia Woolf and boom. Before forming Elements, she studied theatre in South Africa, and earned her BA in Dramatic Arts at UCSB. She has worked in Casting, Assistant Directing, Dramaturgy, and other internships regional theatres including The Guthrie, Seattle Repertory, Mixed Blood, Marin Theatre, and more.  Recently, she directed Campaign at the Museum of Art and Design and is currently directing for the Greenhouse Theatre Ensemble. Sara currently works for The National Theatre Conference. She continues to serve on the Board at Elements.