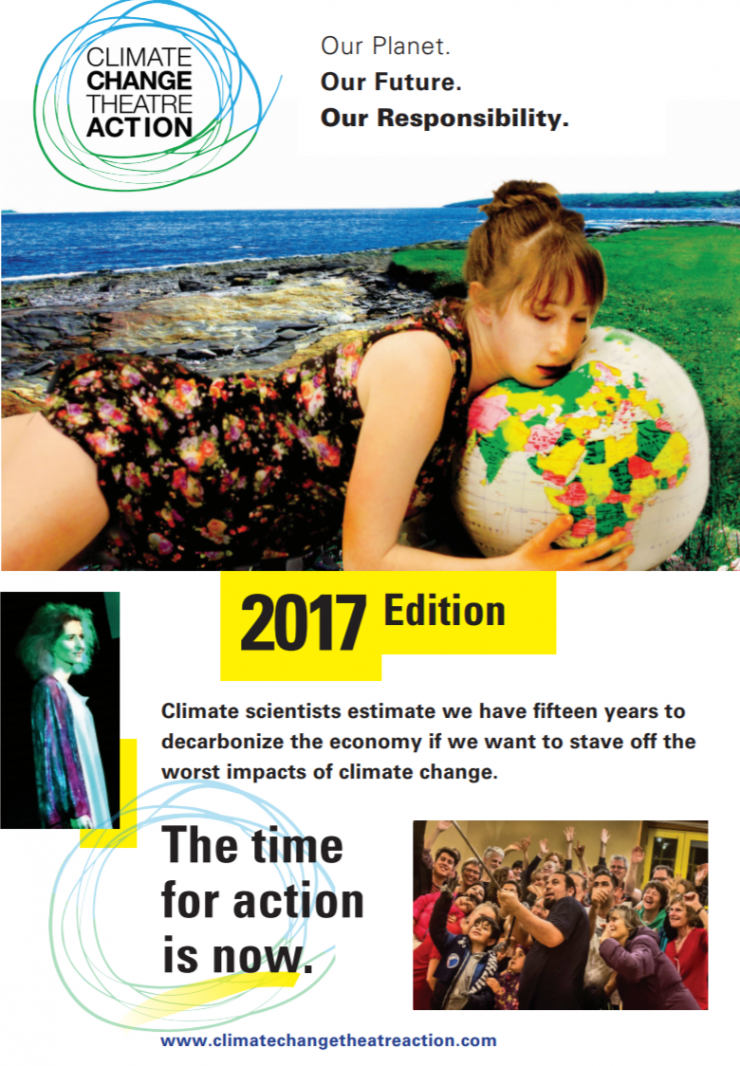 Climate Change Theatre Action was a worldwide series of readings and performances of short climate change plays presented October 1 – November 18, 2017 to coincide with the United Nations COP 23 meeting. Fifty playwrights from around the world were commissioned to write one- to five-minute plays about an aspect of climate change. These plays were then made available to producing collaborators interested in presenting an event during the project’s time window. Events can be as simple as a reading in a classroom, or as elaborate as a rehearsed presentation for a theatre audience. Collaborators were encouraged to design their event to reflect their won aesthetic and community, and to include additional material by local artists.

They come from every continent on the globe, represent over 25 cultures, are from industrialized and developing countries, urban and rural areas, and range in age from early 20s to mid 60s. Some are from low-lying island nations threatened by sea level rise, others are from countries facing severe heatwaves, floods, or droughts. Some are recent migrants, some inhabit the country their ancestors chose or were brought to, and many live on and fiercely protect the land where they were born. Together, they create an incredibly diverse and talented group with widely different perspectives.

CCTA 2017 is a collaboration between the Center for Sustainable Practice in the Arts, NoPassport Theatre Alliance, The Arctic Cycle, Theatre Without Borders, and York University, and is supported by the Compton Foundation, the Social Sciences and Humanities Research Council of Canada, and a York University Canada 150 Grant.

About HowlRound TV
HowlRound TV is a global, commons-based peer produced, open access livestreaming and video archive project stewarded by the nonprofit HowlRound. HowlRound TV is a free and shared resource for live conversations and performances relevant to the world's performing arts and cultural fields. Its mission is to break geographic isolation, promote resource sharing, and to develop our knowledge commons collectively. Participate in a community of peer organizations revolutionizing the flow of information, knowledge, and access in our field by becoming a producer and co-producing with us. Learn more by going to our participate page. For any other queries, email [email protected], or call Vijay Mathew at +1 917.686.3185 Signal/WhatsApp. View the video archive of past events.

The performance starts at 10 minutes in so please skip to 10:00 if you'd like to avoid waiting 10 mins for the audience to find their seats. :-)

Why Do Women Climate More Than Men?
Chantal
Bilodeau
Essay

Why Do Women Climate More Than Men?

Chantal Bilodeau kicks off this week’s series on Theatre in the Age of Climate Change by suggesting that women in the arts may be our planet’s best bet for survival.

Public Access Archives: The End of the Theatre Industry

Taylor Leigh Lamb and Sabine Decatur share emails, letters, social media posts, and more from the future that represent the period of profound change in the theatre industry beginning in 2021.