COP OUT—Art Speaks Out On Climate Change at Arts House 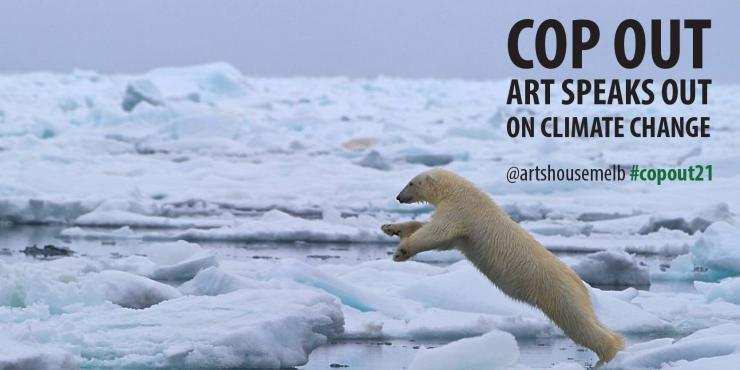 For their final Supper Club of 2015, Arts House hosts an eclectic and esteemed group of scientists, artists, academics, and activists for COP OUT—an online livestreamed event that will take place on the final day of the Paris Conference of Parties (COP21) and as part of ArtCOP21 featuring an evening of conversation, performance, responses, and provocations.

Will the politicians collaborate and deliver the agreements and set the targets the planet needs? Or will the endeavor be compromised by economic and political drivers?

In Twitter, engage with #copout21 and @artshousemelb. Online audiences will be able to ask questions that will then be answered and debated by the panel in real-time.

Our emcee for the evening is musician and activist Matt Wicking from the Centre for Sustainability, who will introduce and interview the thirty plus contributors over the three hour live streamed event—including two City of Melbourne Councilors, Cathy Oke—who will speak live from Paris—and Councilor Rohan Leppert here in Melbourne, with their litmus test impressions on the successes and challenges of COP21 and the huge role art and culture is playing in the event outside the conference.

Other guests include playwright, Stephen Sewell; atmospheric scientist (playing a carbon cop), Professor David Karoly; performer, Nicola Gunn; and former head and current researcher at the Monash Sustainability Institute, Professor Dave Griggs. All this alongside the broadcast of short films, audio works, and documentation by artists and others responding to this global challenge.

ArtCOP21 will connect hundreds of thousands of people to the climate challenge through an extensive global program of over 290 major events; art installations, plays, exhibitions, concerts, performances, talks, conferences, workshops, family events, and screenings—plus a whole range of people power gatherings and demonstrations—taking place right across the world.