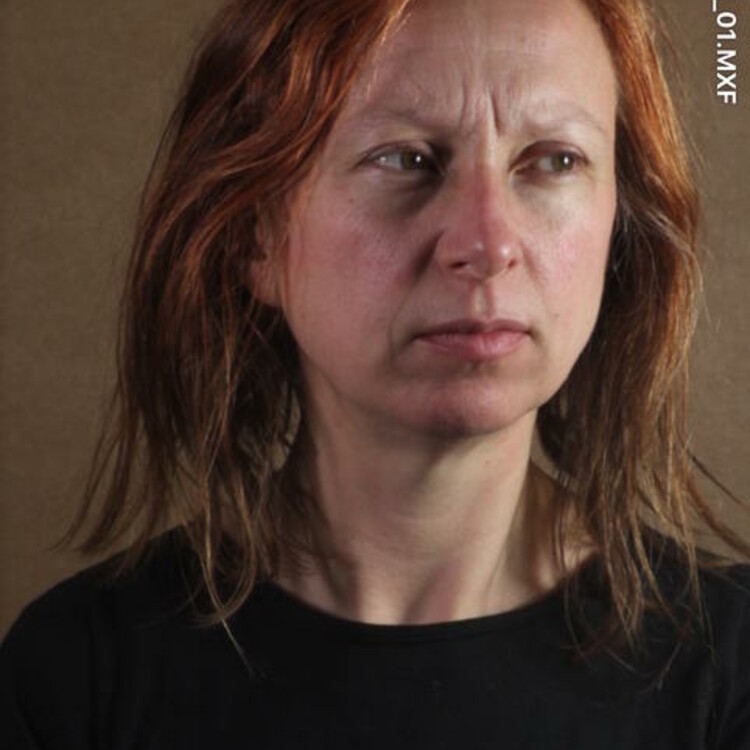 The Theatre in the Age of Climate Change series shines a light on the crucial role artists have to play in creating new and empowering narratives for our highly uncertain times. It makes visible the many connections between environmental and social justice, between global and local concerns, and between collective and personal responsibility. In this essay, UK writer Zoë Svendsen explains how she uses performance installations to invite audiences into imagining alternative and more sustainable futures. —Chantal Bilodeau

The Factory of the Future

A Collaborative Project for Imagining Otherwise

The Theatre in the Age of Climate Change series shines a light on the crucial role artists have to play in creating new and empowering narratives for our highly uncertain times. It makes visible the many connections between environmental and social justice, between global and local concerns, and between collective and personal responsibility. In this essay, UK writer Zoë Svendsen explains how she uses performance installations to invite audiences into imagining alternative and more sustainable futures. —Chantal Bilodeau

“Those who tell the stories rule the world.” With that claim, George Monbiot opens his book Out of the Wreckage, a call to arms for a world beyond neoliberalism. When it comes to stories, it matters who tells them, as well as what the stories are and where space can be found in culture for imagining otherwise.

The fight over who gets to tell what story is ongoing, but there is also another role for the arts—to flesh out what those other stories might be. When this happens, a generative role for the arts in relation to politics starts to emerge. It is not necessarily a traditional message-based role of overt acts of persuasion, but one that undertakes the speculative and provisional work of imagining, depicting how we might live within very different social and economic conditions. It is a challenging requirement: I, for one, have had all my theatre muscles tested by the demand to imagine how possibilities for a world beyond climate crisis might work. For so many of us living in cultures built on fossil fuel use, it is much easier to see losses and sacrifices than it is to see what might be gained by a transition to a world that faced up to the crisis. 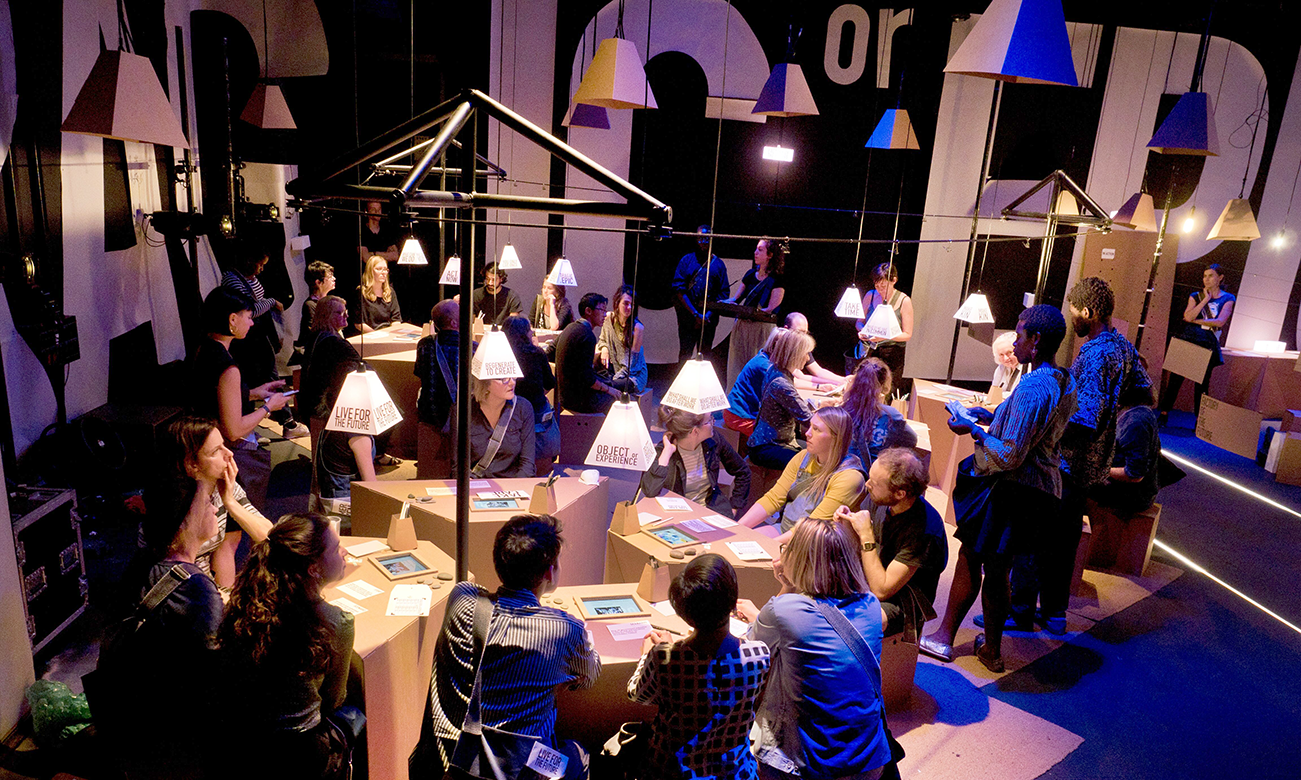 Introduction to the scenarios for WE KNOW NOT WHAT WE MAY BE at the Barbican Centre. September 2018. Photo by David Sandison.

I work with a network of theatremakers and, having made a show called World Factory that immersed audiences in the ethical conflicts embedded in consumer capitalism, we asked ourselves: What next? Supported by an artistic residency whose aim was to explore future scenarios in relation to climate change, I looked at how the economic system could be changed, through a process I call “research in public,” where research that ordinarily goes on behind closed doors becomes a conversation held in public—at relaxed events publicized on social media and in cafés or theatre foyers or anywhere informal.

In response to these conversations, my collaborators and I devised forty-nine economic and legislative changes to enable human and planetary flourishing. We then put these to audiences in the performance installation WE KNOW NOT WHAT WE MAY BE at the Barbican Centre in London over five days in September 2018. Actors improvised stories of a transformed City of London based on the scenarios that were discussed, argued over, and voted on by audiences.

The task for audience and actors alike was to imagine what it might be like to live in a “new normal” of social and environmental flourishing. The creation of the imagined stories was structured in a way that was built on collaboration—not consensus. It was networked, multi-perspectival, and took place over time. No single person (maker, expert, or audience) was present at every moment. Each generation of audience watched stories created from discussions held earlier by other audience members and worked on scenarios themselves, which would be watched by others. This principle of generational, generative thinking is embedded in the heart of the future direction of the project.

For so many of us living in cultures built on fossil fuel use, it is much easier to see losses and sacrifices than it is to see what might be gained by a transition to a world that faced up to the crisis.

In response to the Barbican installation, my performing arts company, METIS, was commissioned to create a bespoke version for the Oslo Architecture Triennale 2019, which we developed in collaboration with the Cambridge Conservation Initiative. Entitled The Factory of the Future, the artistic “output” is now a video installation, but also encompasses workshops and consultative conversations in Oslo. Added to our stories of a post-capitalist London are stories of a transformed Oslo in a post-fossil fuel culture. To source the stories, we have been working with architects, urban planners, and local citizens to imagine what Oslo might be like under economic conditions designed to enable the flourishing of both humans and the environment. The actors will then create stories of what it is like to live in the city under these transformed conditions; these stories of Oslo will then be added to the video installation that presents an alternative London.

Oslo is often already seen as a beacon of environmentally friendly, socially engaged practices. The project takes this as inspiration whilst challenging the city to imagine it is no longer able to derive its wealth from oil or the exploitation of its copious natural resources. Every scenario we imagine is based on conversations had with specialists, which means our imagined alternatives are not utopias, they have roots in reality. They are tried and tested, but never at a systemic level. This is what sets the artistic work apart from reality—the socioeconomic ideas are not necessarily new, or even wildly radical, but they currently swim against the tide of neoliberal systems and so remain outliers. 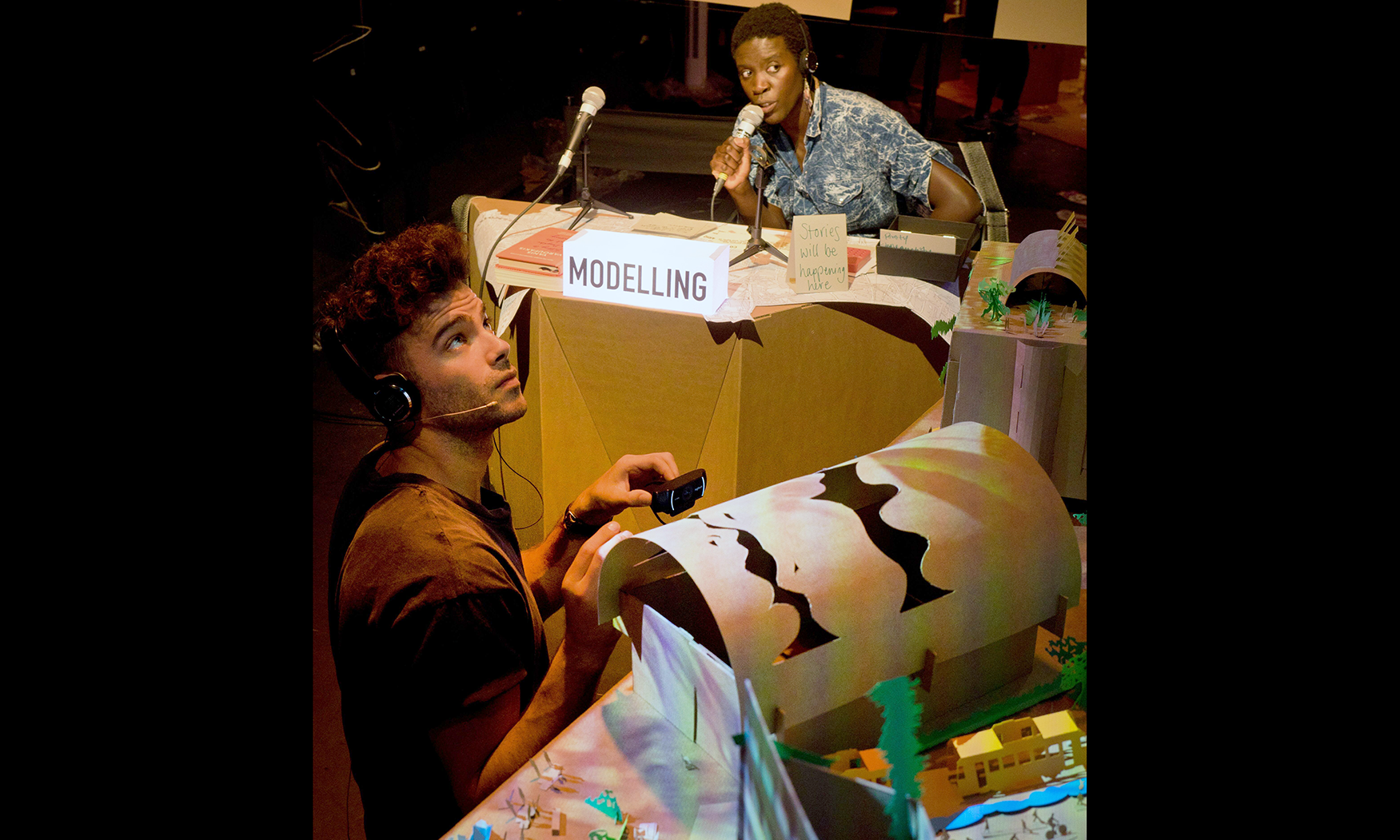 Anna-Maria Nabirye and Tom Ross-Williams imagine the future during WE KNOW NOT WHAT WE MAY BE at the Barbican Centre. September 2018. Photo by David Sandison.

What we are attempting is not the fashioning of another utopia—the scenarios we generate are multiple, overlapping, partial, and also at times contradictory. They aim at the very act of imagining rather than achieving consensus about what is to be done. It is nevertheless a challenge.

The demand for “realism” (the term hovering somewhere between its social use and its use in drama) masks our embeddedness in neoliberal myths, which take, as a given, that the only possible economic structure is that of the “free” market and that self-interest is the main driving force behind all human behavior. Much has been written about this theoretically, but this project has forced us to recognize how we are living it, to notice our own internal barriers to believing a more collaborative, less self-interested social structure is possible. Still, despite now understanding the economic myths we are caught up in and their impact on our everyday decisions, we as a group of artists have had to train ourselves not to find it so implausible that global structural change could ever actually occur. The project, however, invites us to imagine otherwise, to immerse ourselves in the potentialities of such change.

We, in high-carbon culture, are fossil-fuelled and environmentally damaging regardless of our motivation or capacity for change.

We have even come up with a term for our current situation, “high-carbon culture,” which explains the contradictions we currently live in—that we, in high-carbon culture, are fossil-fuelled and environmentally damaging regardless of our motivation or capacity for change.

It is also, however, a myth that change cannot occur quickly or decisively, as the Rapid Transition Alliance demonstrates: humans are adept at large-scale, rapid, lasting, transformational change. By imagining our way beyond such “implausibility,” we’ve started to take a deep pleasure in willfully and doggedly ignoring those despairing whispers, enjoying instead our forays into a culture of repair, recuperation, and mutual value.

The act of storytelling embedded in alternative scenarios takes on a political dimension. Unlike traditional conceptions of political art, it does not directly argue for revolution—there is already so much brilliant and necessary directly activist work being done on this front globally. Rather, it creates a space for imagining what might be gained once transformative change does become possible. In this sense it doesn’t matter too much what particular detail of this alternative culture we exercise our storytelling muscles on. It just matters that we keep doing it, that we keep on fleshing out other realities in defiance of the current obvious systemic barriers.

I am excited by the discovery that the more I stay in this space, the more I start to see this other reality emerging all over the place. The very act of imagining transforms my perception of possibility, suggesting that, as Monbiot implies, reality really might be shaped by the stories that hold the most sway in our imaginations. 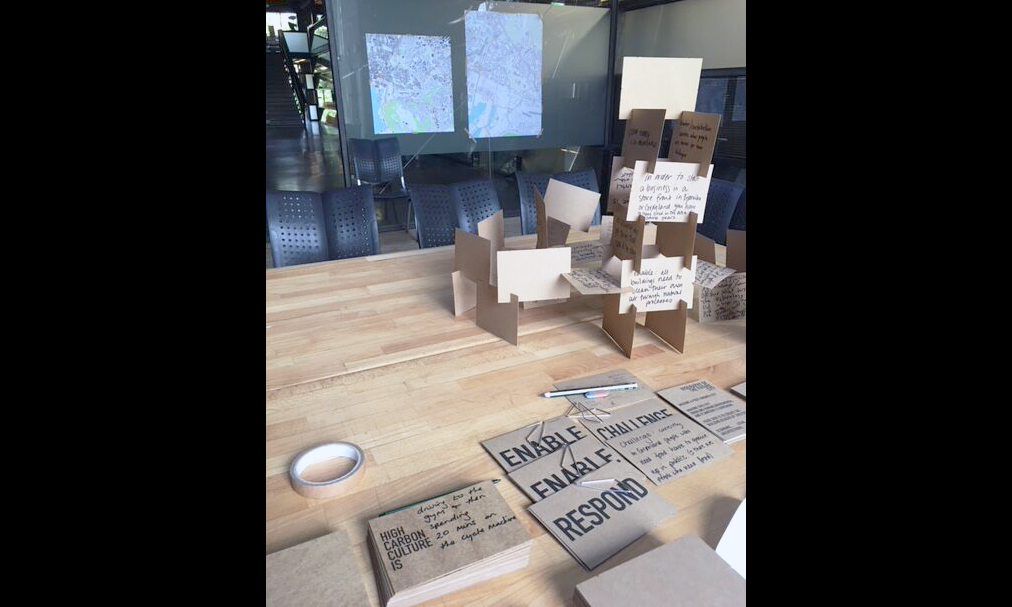 Factory of the Future in workshop. Oslo 2019.

Having experimented throughout this project with a variety of interactive performance forms, we have, ultimately, come to focus on to the simplicity of storytelling: drawing on terrain mapped by politicians, policymakers, economists, and future visionaries to imagine what it might actually be like to live in another world. This involves drilling down into everyday life, acting on writer Amitav Ghosh’s invitation set out in his seminal set of essays on culture, the climate, capitalism, and colonialism, The Great Derangement: “What we need […] is to find a way out of the individualizing imaginary in which we are trapped.” And, brilliantly, we are far from alone—there are proliferating examples of this kind of work, from Jonathan Porrit’s The World We Made, to the Paris-based Plurality University’s Future Fragments project, to Naomi Klein’s collaboratively created manifesto at the end of No is Not Enough. We hope to continue our work, to collaborate with cities and imagine them as otherwise in the face of climate crisis.

At the very least, then, this practice of imagining otherwise is a kind of bearing witness, offering a reminder in the historical record for those in a climate-crisis-ridden future of self-interested survivalism, who might look back and ask, How the hell did they let it happen? It is a testament to the fact that, right now, we have the ingenuity, the techniques, and the desire for our future to be collaborative and epic rather than isolationist and tragic.