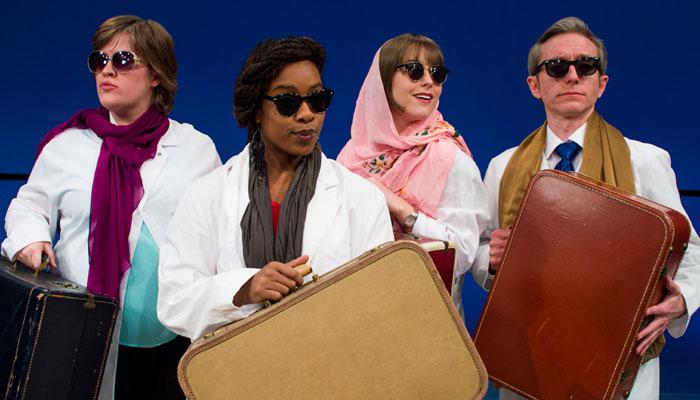 Nashville Repertory Theatre’s Ingram New Works Festival presented the latest new plays born from our Ingram New Works Project’s playwrights lab livestreamed on the global, commons-based peer produced HowlRound TV network at howlround.tv on 11, 12, 15, and 16 May. Tweet your questions/comments to @nashrep using #howlround to participate in the talkback with the playwright immediately following each reading.

The Ingram New Works Festival is a celebration of new work born and fostered in our Ingram New Works Project under the care and guidance of Nashville Rep’s Producing Artistic Director René D. Copeland and our 2014-15 Ingram New Works Fellow, Pulitzer Prize-winner Donald Margulies. The Fest presents staged readings of each new work from our lab playwrights featuring our fantastic Nashville actors. Each reading will be followed by a talkback, bringing the audience right into the conversations about these new plays!

Join the conversation! Tweet your questions/comments to @nashrep using #howlround to participate in the talkback with the playwright immediately following each reading.

We are accepting applications for our 2015-2016 Ingram New Works Project. Learn more here—

Monday 11 May at 5 p.m. PDT (Los Angeles) / 7 p.m. CDT (Chicago) / 8 p.m. EDT (New York)
Showing by Gabrielle Sinclair
Today is the gender reveal party for Tracy's baby, but when she discovers there may be something wrong with her pregnancy, this cute and fun event with a cake filled with blue or pink frosting becomes for her a ritual with the power to reveal the future, to cleanse her past, to make her a good mother, and to keep her child safe.

Tuesday 12 May at 5 p.m. PDT (Los Angeles) / 7 p.m. CDT (Chicago) / 8 p.m. EDT (New York)
Simply Bess by Bianca Sams
Simply Bess follows a young African American actress trying to make a name for herself. We see her backstage trials and tribulations on the 1950s European tour of Porgy and Bess, sponsored by the American State Department as a way to combat communist propaganda about racial problems in the United States.

Friday 15 May at 5 p.m. PDT (Los Angeles) / 7 p.m. CDT (Chicago) / 8 p.m. EDT (New York)
Air Space by Tori Keenan-Zelt
A young couple buys a $500 foreclosure in a small Rust Belt city. As they try to flip the house, they discover that the couple who built it never left and has been secretly living in the walls. A darkly surreal comedy about weird smells, lost things, family, and what we hold on to when nothing that we do is enough.

Saturday 16 May at 5 p.m. PDT (Los Angeles) / 7 p.m. CDT (Chicago) / 8 p.m. EDT (New York)
The Ice Treatment by Nate Eppler
The world’s most infamous Olympic Figure Skater reinvents herself as a screenwriter by pitching the blockbuster screenplay of her own life story. It might not be factual, but it’s all true.

About the Playwrights
Gabrielle Sinclair is a playwright and teaching artist based in Greensboro, North Carolina. Her plays have been developed or presented through the Actors Studio Playwright-Directors Workshop, The Annoyance Theater, the chashama Performance Series, the Sweat Shop at The Paradise Factory, Horse & Cart’s PlayOffs, The Metropolitan Playhouse Living Literature Festival, as a fellow with America-In-Play, and as resident playwright of Lonesome George Productions. Gabrielle is also an improviser and sketch writer, and performed with The Annoyance in Chicago, iOWest in Los Angeles, and in festivals around the country. She’s a graduate of The Second City writing program, and also studied devised theatre and Lecoq at the Celebration Barn in South Paris, Maine. Gabrielle is an associate member of the Dramatists Guild. BA—University of South Carolina. MFA Playwriting—Actors Studio Drama School. gabriellesinclair.com

Nate Eppler currently serves as Playwright-in-Residence for Nashville Repertory Theatre. His plays include Long Way Down (3Ps Productions, Steinberg/ATCA New Play Award semi-finalist 2011), Larries (Nashville Repertory Theatre 2013), and Sextape & Other Stories (Playhouse Nashville 2013). Mr. Eppler is one of the curators of The Ten Minute Playhouse, a quarterly festival of new plays by Tennessee Playwrights, and is co-founder of Playhouse Nashville, an organization devoted to producing new works for the stage and elevating the voices of playwrights in the south. Mr. Eppler is a proud member of the Dramatists Guild of America. For more information visit nateeppler.com.

I can't wait for this. What's better than kicking off summer by slapping some new plays on the butt?