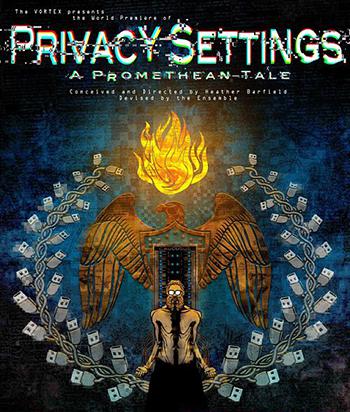 What would you do if you had to choose between privacy and security? Who holds the master key to open the back door to your private life? Hackers and lawyers, government agencies and law enforcement, data miners and marketing executives, identity thieves and credit bureaus—all are interested in who you are, what you reveal, and what you believe is secure.

Privacy Settings: A Promethean Tale is an ensemble-devised interpretation of the Ancient Greek play Prometheus Bound by Aeschylus and based loosely on the actions and punishments of contemporary whistle-blowers, advocates for digital privacy rights, and perversions of American civil liberties. Privacy Settings offers a “surveillance fun house” with opportunities for unique interactive experiences.

Conceived and directed by VORTEX Associate Artistic Director, Heather Barfield with a robust cast of agent-performers.

We live with black boxes attached to our hips as 21st-century technology and human dignity collide. Data perpetually emits our habits and desires as bits and bytes are hoarded in top-secret shelters. Surpassing the foreboding fictions of "Big Brother" and "Skynet," we are firmly planted in the era of information overdrive. In June 2013, notorious whistle-blower Edward Snowden exposed what some may have suspected all along: "They" are watching you.

About The VORTEX
We conjure and navigate the storm of imagination with urgent, unashamed art that dares to dream the world in which we want to live. This magic emanates from our cultural harbor, embraces diverse communities, breaks down barriers, and opens channels for vital exchange.

Widely-recognized as the pioneering leader in Austin’s alternative theatre scene, The VORTEX has produced over 300 productions, including more than 100 world premieres. Artistic work includes operas, musicals, plays, ritual theatre, experimental collaborative, and devised projects.  The VORTEX venue is artist-owned and operated and was the first theatre to make a home for the arts in 1994 in Austin’s historically-underserved Eastside, now a blossoming arts district. A key player in the Austin New Works Community and one of Austin’s major theatrical forces, The VORTEX has received more than 100 major local awards and hundreds of nominations for artistic excellence. The VORTEX has always engaged in gender- and color-fluid,  non-traditional casting. The VORTEX has offered its free, award-winning Summer Youth Theatre since 1991. Internationally renowned as a haven for alternative performance, The VORTEX has presented work by dozens of famous cutting-edge artists. The VORTEX owns and operates The Butterfly Bar. With a liquor license, free WiFi, a huge Yard and deck, and regular nightly hours, The VORTEX thrives as a community destination and leader in the growth of arts and economic stability in Austin.

Approaches to Devising New Work Alongside Actors with Disabilities

Adam Roberts talks about the devising process used at TILT, a performance company in Austin, Texas, that celebrates the creative work of adult actors with disabilities.