Representation and 21st Century Responsibilities in the Performing Arts

If art is a mirror to society, how much should that mirror reflect current demographics?

Houston is wielding its diversity as an international calling card. We are the most racially diverse cosmopolitan area in the country, and our current demographics reflect the future composition of most of America’s cities. If Houston’s culture—art, food, music, dance, and theatre—is encompassing of this, what is the arts community’s responsibility to reflect and own this 21st century reality?

As part of an ongoing national discussion about race and representation recently re-ignited by HGO’s recent production of Nixon in China, Asia Society Texas Center hosts a panel discussion and public conversation. The panel uses the lens of Asian and Asian American identity to surface ideas of representation, voice, and creative interpretation. The panel and conversation will discuss recent trends, organizational realities, audience reactions, and items for future action such as:

This conversation will be livestreamed via HowlRoundTV.

Pia Agrawal joined the University of Houston Cynthia Woods Mitchell Center for the Arts as Program Director in August 2014 where she ensures the success of the Center’s public programming including the Mitchell Artist Lecture, the annual CounterCurrent festival, and the Center’s artist residencies. Prior to her work at the Mitchell Center, she served as the Managing Director of the Rude Mechs (Austin, TX) and as Programming Director of FringeArts (Philadelphia, PA).

Ryan Speedo Green, bass-baritone, is making his HGO and role debut as Osmin in The Abduction of the Seraglio in April. This season he also returns to the Metropolitan Opera as Colline in the iconic Zeffirelli production of La Bohème and joins the Vienna State Opera for his third season as an ensemble member, with roles including Basilio in The Barber of Seville and Timur in Turandot, among others. In the fall of 2016, Little, Brown and Co. published Sing for Your Life by New York Times journalist Daniel Bergner; the book tells the story of Green’s personal and artistic journey from a trailer park in southeastern Virginia and from time spent in Virginia’s juvenile facility of last resort to the Metropolitan Opera stage. An alumnus of the Met’s Lindemann Young Artist Program, Green has performed a number of roles at the Met, including the Mandarin in Turandot, Rambo in the Met premiere of The Death of Klinghoffer conducted by David Robertson, the Second Knight in a new production of Parsifal that was broadcast as part of the Met’s Live in HD program, the Bonze in Madama Butterfly, and the Jailer in Tosca (also broadcast in Live in HD).

Born in Taiwan, Shih-Hui Chen has lived in the United States since 1982 and received her doctorate from Boston University. In addition to garnering a Koussevitzky Music Foundation Commission, a Guggenheim Fellowship, and an American Academy in Rome Prize, her compositions have been performed widely throughout the US and abroad, including China, Japan, England, Germany, and Italy. Chen’s compositions have brought her into contact with many orchestras including the Philadelphia Orchestra, Cleveland Orchestra, Boston Modern Orchestra Project, Utah Symphony, and Taipei Chinese Orchestra. Her chamber music has been presented by the Arditti Quartet, Network for New Music, Pittsburgh New Music Ensemble, and the Freon Ensemble in Rome, Italy. Seeking a deeper understanding of her native culture and music, Chen spent two years in Taiwan studying indigenous and Nanguan music (2010 Fulbright Senior Scholar and 2013 Taiwan Ministry of Foreign Affairs Fellowship, affiliated with the Institute of Ethnology, Academia Sinica.) Chen serves on Asia Society Texas Center’s Performing Arts & Culture Committee. She is the department chair of composition and a professor at The Shepherd School of Music, Rice University, where she also chairs the Syzygy New Music concert series.

Patrick Summers was named artistic and music director of HGO in 2011 after having served as the company’s music director since 1998. He has conducted more than 60 operas at HGO and has been responsible for many important artistic advances, including the development of the HGO Orchestra. Some highlights of his work at HGO include conducting the company’s first-ever complete cycle of Wagner’s Ring; collaborating on the world premieres of André Previn’s Brief Encounter, Christopher Theofanidis’s The Refuge, Jake Heggie’s It’s a Wonderful Life, The End of the Affair, and Three Decembers, Carlisle Floyd’s Cold Sassy Tree and Prince of Players, and Tod Machover’s Resurrection; leading the American premiere of Weinberg’s Holocaust opera The Passenger at HGO and on tour to the Lincoln Center Festival; and nurturing the careers of such artists as Christine Goerke, AilynPérez, Joyce DiDonato, Ana María Martínez, RyanMcKinny, Tamara Wilson, Albina Shagimuratova, Anthony Roth Costanzo, Norman Reinhardt, Jamie Barton, and Dimitri Pittas. Maestro Summers is principal guest conductor for San Francisco Opera (SFO), where he was honored in 2015 with that company’s highest honor, the San Francisco Opera Medal.

Steven Wu is the Festival Co-Director of the Houston Asian American Pacific Islander (HAAPI) Film Festival hosted by OCA-Greater Houston (OCA-GH). Steven first joined OCA-GH as a volunteer for the HAAPI Film Festival when he moved to Houston from Atlanta, but soon discovered love for the cause to take on a larger role and begin new initiatives for the festival (Local Shorts Competition, Student Film Competition, Filmmaker Workshops). Besides the Film Festival, Steven also co-founded and currently leads the TEA (Together Empowering All) Talks program in OCA-GH to facilitate community discussions on issues that affect the AAPI community and promote solidarity among all of our unique groups in Houston. While a Chemical Engineer by degree and traveler at heart, Steven’s true passions lie in advancing the equality of AAPI’s and minorities through the power of media and discussion.

More panelists to be announced. 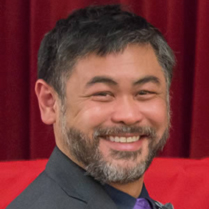 Sixto Wagan is the inaugural director for the Center for Arts & Social Engagement at the University of Houston. Prior to this role, he led DiverseWorks Artspace as Artistic Director, Co-Executive Director and Performing Arts Curator. During his tenure, he nurtured artists, communities and emerging arts organizations through commissions and place-based initiatives. Wagan is known for collaborating with performers whose works tackle prescient cultural, social, and political issues. He currently serves on the board of Dance Source Houston, The M.A.T.C.H. (Midtown Arts and Theater Complex Houston), and the Board of Trustees of Dance/USA. He served as a Hub Site for the National Dance Project, and on the boards of the National Performance Network and The MacDowell Colony. He has been recognized with two awards in Houston for Dance Presenting. Wagan has been part of the Performing Arts Japan Advisory Committee, French—US Exchange for Dance (FUSED) initiative, Dance Down Under Ambassadors, the National Performance Network’s US/Japan Connection, the Contemporary Art Centers consortium, and the Performing Americas Project; and has served on panels for a number of foundations including the Doris Duke Charitable Foundation, Joan Mitchell Foundation, ArtPlace America, USArtists, and MAP Fund; and government entities and partnerships including the National Endowment for the Arts, Texas Commission on the Arts, and the Houston Arts Alliance. Wagan has spoken at and facilitated panels on equity and diversity at national and regional convenings hosted by Americans for the Arts, Western Arts Alliance, and other national/regional organizations.

Jubilee for the Future

AAPI Theatre and the Promise of Solidarity

Sophia Skiles talks about the momentum of unprecedented acclaim and agency for Asian American Pacific Islander (AAPI) theatremakers this spring, which quickly transformed into an inverse rise of AAPI-directed bigotry and bias for the global pandemic.