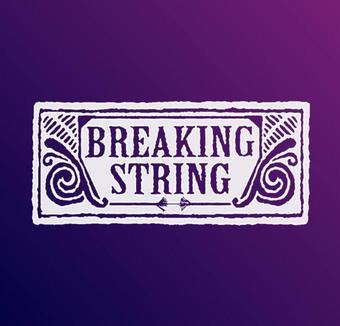 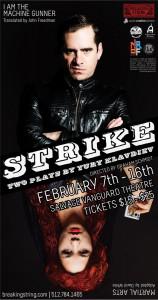 Breaking String Theater extends its work in staging the best that contemporary Russian playwriting has to offer with Strike: Two Plays by Yury Klavdiev. Presented back-to-back, I am the Machine Gunner (trans. John Freedman) and Martial Arts (adapted by David White) launch audiences into Klavdiev's world, inspired by his upbringing on the mean streets of a Russian industrial slum.

I am the Machine Gunner (translated by John Freedman)
Portrays a street tough meditating on his first gun battle, and recalling/becoming his grandfather, who fought in one of the bloodiest battles of World War II's eastern front, The Moonzund Landing Operation. Starring Joey Hood, this one-act monologue walks the line between tenderness and brutality for which Klavdiev has achieved considerable renown throughout Russia.

Martial Arts (adapted by David White)
The story of two young children on the mean streets of a post-Soviet industrial town, which is a shell and a wreck of its former self. But this is no normal story of fleeing circumstances; Klavdiev fits their struggle into Russia's rich tradition of children's fantasies, recasting dragons as drug-dealers and witches as crooked cops. Doing so, he makes accessible these almost-unbearable tales of children's suffering. Another way to think of this story is that it's as if Roald Dahl wrote Pulp Fiction.

Klavdiev's plays have already premiered in the United States and enjoyed strong critical reception. As directed by Yury Urnov, Martial Arts stunned and delighted audiences at the Center for International Theatre Development's New Russian Drama Conference in 2009, and I am the Machine Gunner, as directed by David White, had its premiere at the Baltimore Theatre Project, and toured to Chicago and San Diego, among other cities. A native of Togliatti, Russia, Klavdiev has elicited comparisons with Tarantino and Orestes, with plays that probe philosophical depths, with an almost cinematic feel.