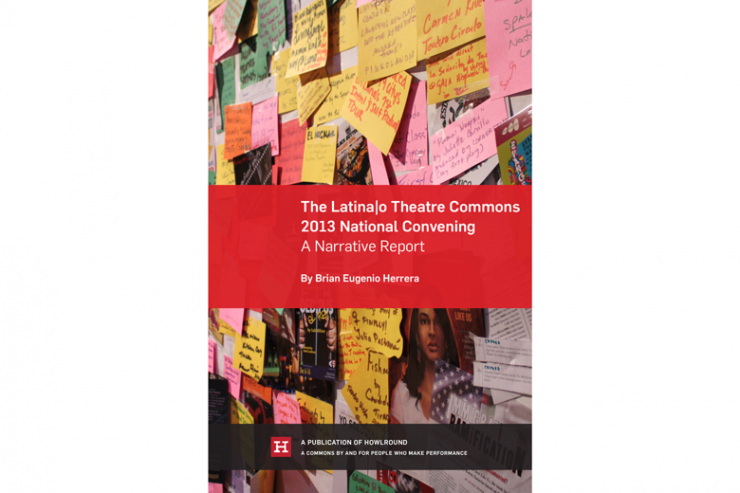 HowlRound's Jamie Gahlon spoke with scholar Brian Herrera about what he learned compiling The Latinx Theatre Commons 2013 National Convening book, and his vision for how others may find it useful.

Jamie Gahlon: Congratulations on the official publication of your book, The Latinx Theatre Commons 2013 National Convening: A Narrative Report. Tell our readers what it’s about.

Brian Eugenio Herrera: The book offers a blow-by-blow account of what happened during the three day Fall 2013 Latinx Theatre Commons (LTC) National Convening. It tries to take in the room, get a sense of the conversations happening, and capture the flow of the unplanned events that occurred. It also aims to try to aggregate the many ideas, inspirations, and instigations that bubbled forth when everybody got together.

Jamie: How did you write this book?

In many ways, I got a fuller view of the Convening through writing the book; as a participant I could only be in one of those breakout groups (and there were many over the three days), but through looking at the documentation I was really able to hone in on not only what those groups reported back to the large group, but also a sense of the intensity, the complexity, and the depth of the many breakout conversations.

Writing the book really gave me an understanding of just how much of work was done at the Convening, of how many really important conversations were activated—this event was transformative. It became really important to me that that what happened was valued; That I could create something permanent to say that we had this conversation. Sometimes I worry that there is an incredible sense of energy being built up, but then where does it go? How do we push it forward? I hope the book will serve as a reference point to what were we thinking in 2013 so we can see where we are in relationship to it today.

Jamie: Who should read this book? Who will find it useful?

Brian: I am hoping that, first off, everyone who was at the Convening reads it. However, anyone can use it as a resource to get a clearer sense of what happened. Ultimately, this book is one way into the conversation, momentum, and movement that is the LTC.

I teach in colleges, and I really approached this book as a resource for students, teachers, researchers, and for folks writing about Latina/o theatre now. I designed it to be user friendly and easy to skim. You can leaf through it and see what catches your eye and then maybe dig in. As folks look at it, they might see a pull quote, or a list of ideas, or a poem, or something that draws them in. So it’s really designed to be a useful document—every page is an opening to a conversation.

I also think it’s not only of interest to Latina/os, but really to theatremakers generally… It’s a national conversation—I think folks who are asking questions about not just diversity but also about representation might find this valuable.

I hope that folks will find ways to insist that their institutions acquire the book... because one of the biggest challenges that Latinas/os in theatre have is getting their voices entered into the record in a way that is beyond anecdotal.

Jamie: Is there anything else you would like to say about the book?

Brian:  One of the appendixes includes a list of field-wide resources for Latina/o theatremakers. I am hoping this can be a starting point for us to find more ways of sharing information about resources with one another.

I hope that folks will find ways to insist that their institutions acquire the book (for their theatres, or public libraries, or university libraries) because one of the biggest challenges that Latinas/os in theatre have is getting their voices entered into the record in a way that is beyond anecdotal.

As a scholar, writing this book was a big experiment for me. I don’t know if it works, and I am really interested to see how it moves. In many ways, what we’ve done so far in the LTC has been by the seat of our pants—through figuring it out as we go along. But I think that is its power and I’d like to consider this record as my contribution to our ongoing experiment.

***
The Latinx Theatre Commons 2013 National Convening: A Narrative Report is available in paperback for $15 at howlround.com/shop as well as on Amazon. Additionally, it is available as an ebook (for free) on howlround.com and at both the Apple iBookstore and Amazon Kindle Store (for $1.00).

Learning from and Listening to Latinx Youth at the 2019 LTC TYA Sin Fronteras Festival and Convening
Marci R.
McMahon
Essay