Every person who picks up a pen is a writer, but the one in active pursuit of transcendence through a rigorous journey of courageous on-their-feet defeats is a playwright. A playful creator imagines a world, but the tenacity of an intrepid visionary makes a director. A life on the stage would be simply pretend if not for the tangible things that make color, texture, ambiance, and space. We can all agree that theatre does not happen in the vacuum. And though it does exist and thrive without hierarchies or titles, without the games and the rules (as proven by our ancestors’ practice of ritual, ceremony, and other theatrical forms in this land since before chicken pox), the Theatre of Always will always require you and an other. We were reminded of this at the recent 2018 Latinx Theatre Commons Carnaval of New Latinx Work: a three-day festival of six new new plays at The Theatre School at DePaul University in Chicago, IL. The theme? ConeXión!

Latinx Theatre is not simply looking to identify itself within the frame of the “Anglo-sphere” as much as it is a new form of theatrical language that seeks to create the best work of art possible.

This idea of “the other” can mean more than one thing, and perhaps that’s the reason it is so present in the art of Latinx folx. As an immigrant, I realized quickly that to live and function “between cultures” was inevitably my new state of being. I realized that I had suddenly become “the other,” and in that dispossession of self as whole, I learned to see the other as part of me. In that search of connection to the other, new idioms are born. My childhood home was full of made up words like “yaqué,” meaning “ya que estás parado traeme…” or, “now that you’re up, will you get me this or that.” These shortcuts to meaning, these made up words that belong “just to us,” are a chief way to use the language of colonizers creatively to make gest, create familiarity, and, in the case of Latinx Theatre, make waves.

The idea of the other as an active participant in the realization of a whole self is part of what makes Latinx Theatre a vibrant laboratory in the constant search for common meaning, and a common language. Latinx Theatre is not simply looking to identify itself within the frame of the “Anglo-sphere” as much as it is a new form of theatrical language that seeks to create the best work of art possible. The Latinx writer is he/she/they who communicates in a creative way their own “yaques,” and, with their fellow Latinx artists and audience, propagates unique messages and experiences which are singular to us as Latinx people, and yet are still universal.

Connection between people, like the connection between text and audience, is not only ancient but powerful and, in truth—a radical act. It makes me remember the words of Marshall McLuhan, the Canadian professor, philosopher, and intellectual who said, “Of all the great hybrid unions that breed furious release of energy and change, there is none to surpass the meeting of literate and oral cultures. The giving to [wo]man an eye for an ear is probably the most radical explosion that can occur in any social structure.”

Latinx Theatre lives in that hybridity in that it gives its audiences an eye for an ear. We see what we hear, and we listen to what we see. It was for this reason that I was personally invested in seeing this year’s Carnaval festival include the many others that make up theatremaking, chiefly, those who invite semiotic language: designers. As a playwright who paints, I have always felt a tremendous emptiness witnessing my plays read out loud. Yes, I can paint the picture with words, but the nature of theatre is that it invites and questions the very conflict between word and image. I joined the 2018 LTC Carnaval Programming Committee to help ideate the shape and the ways this festival could incorporate a Design element to bring us back to these powerful truths of connection, collaboration, and theatremaking.

This idea to incorporate designers played in concert with what Lisa Portes, champion of both the 2015 and 2018 Carnavals, had wanted to add: a robust support team that could elevate and sustain the work of this year’s featured playwrights. She brought in a team of Latinx directors to work on the readings of the plays, and turned to Chris Acebo and Isaac Gomez to do the same for Designers and Dramaturgs, respectively. During the Carnaval Opening Ceremonies, she shared some staggering statistics with us, one which stuck with me: less than 4 percent of directors hired in LORT theatres at a national level in the US are Latinx. I can’t imagine what small percentage of that constitutes women, and how many productions in the country hire Latinx dramaturgs and designers at all.

A driving force behind this year’s Carnaval was to provide a peek into the vast world of existing Latinx talent. There was careful and heartfelt curation behind the selection of this year’s directors, designers, and dramaturgs. The goal was to match each of them with a playwright and a play which, based on their own artistic sensibilities, they could critically aid in elevating and furthering. In my opinion, the biggest mistake of the 2015 iteration of the festival was that, in a wish to “flood the pipeline,” the playwrights were left to fly solo in the representation of their pieces. It was as if the play was suddenly expected to be perfect on its own, ignoring completely the elemental need of collaborative support that makes a new play development process work.

We learned. And though we have to acknowledge the problems with curation—things such as privilege and favoritism and the danger therein—it’s important to keep in mind the impact that these Latinx festivals can continue to have if we are courageous enough to reshape their structure and form. We should want any event or program that champions Latinx work to have universal appeal, for our field, for society, and our community. And as they say in my country to warn of the trap of negativity and worrying about what others are doing to you instead of what they can do for all, “If you’re not drinking the water, just let it run.”

It takes courage to create. As artists we must act generously and not with greed. We must have courage to defeat comfort. In fact, it is expected of us. We must choose to learn from our artistic work as we learn from life. We should strive to learn from our mistakes as we do from our successes. We would be in peril as an artistic community if the mistakes of the past did nothing to us but inflate our ego. The illusion of success in the world of art is dangerous: it can disconnect us from our community and from those who are in most need of our work. It is important then that these festivals and convenings do not idolatrize an individual, but that they advance and better the artistic work. And in that way, I applaud the Curators with a heartfelt snap-snap. Director Lisa Portes mentioned in her Opening Ceremony remarks that a dramaturg once told her, “I love the writer, but I love the play more.” This was the northern star in what I heard from Lisa, Isaac, and Chris when it came to selecting the group of directors, dramaturgs, and designers. They all sought to bring forth people from various experiences, who would be generous in joining the writer and “meeting the work where it’s at” to collectively project the best image of the text at hand. Involving designers in the process was a surprisingly key element in elevating the work this year. I wasn’t wrong in thinking we needed to give eyes to our ears.

The Carnaval, outside of the curation and the work presented, had a strong centrifugal force: that of connection. Any society which accomplishes incredible feats leaves behind the residue of an absolute truth: they were a united community. In the world of Latinx theatre, it has become more than obvious that if divided, we will never accomplish the great changes that need to happen to make for more equitable national practices in selection, hiring, and production. Indeed, the Carnaval’s “theme” and appearing on all of our swag was the point of Conexión, or connection.

Among the celebratory buzz, however, was the acknowledgement that what we had present was just a peek into something much larger. In regards to her selection of directors, Lisa said, “Within the context of the Carnaval we sought to amplify the voices of six Latinx directors knowing that they are just the tip of the iceberg when it comes to terrific Latinx directors around the country.” This was true of the selection of plays, which underwent a rigorous selection process via committee. The festival smartly tightened its language in adhering to the fact that it exists to feature new plays, and not to promote new playwrights. In the spirit of you as the other and the other as you, this year was all about connection and collaboration over individual achievement.

With the help of designers, directors, and dramaturgs, and the response of every person who attended, the Carnaval became a play in itself, filled with laughter, tears, frozen extremities, bouts of hunger, and collective growth.

The 2018 Carnaval is just the beginning. It is only the second stone in what will be a cascade of courageous gathering, doing, and making. But the Carnaval fulfilled its mission: as Lisa wrote in her program note, it presented plays whose characters fought to “redefine the rules, reimagine what’s possible, and push past false boundaries, insisting on a larger world” and it did it with the support of others who imagined these stories alongside the authors and made them feel less alone in the process. With the help of designers, directors, and dramaturgs, and the response of every person who attended, the Carnaval became a play in itself, filled with laughter, tears, frozen extremities, bouts of hunger, and collective growth. And with this ancient form of minor magic, the one of connection, societies have not just survived but transcended. The future of Latinx artists and art making looks bright, should we take care to continue in the spirit of courage and resist every urge to cast, write, think, act, design, or do out of comfort.

It takes courage to create, and I believe it takes the same courage to curate. If we change our perspective to see curation as “gathering” rather than presenting, then we can believe that the gathering continues after each harvest, and that the act of curation is courageous in that it doesn’t stop with “the tip of the iceberg.” In the Anglo-sphere of our theatre, courage drives where comfort resides, it propels where fear pulls back, and it lifts up where austerity stifles. The art of people of color has lived and promises to continue to thrive under one absolute principle: courage. That in itself is our “yaque,” our common language, our conexión. 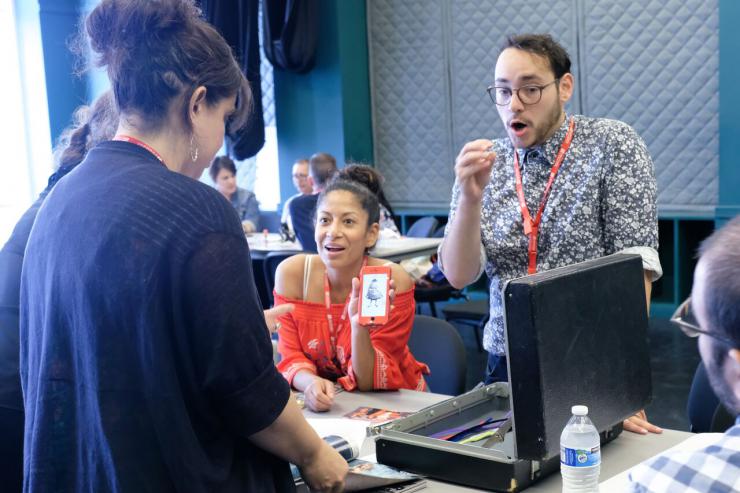 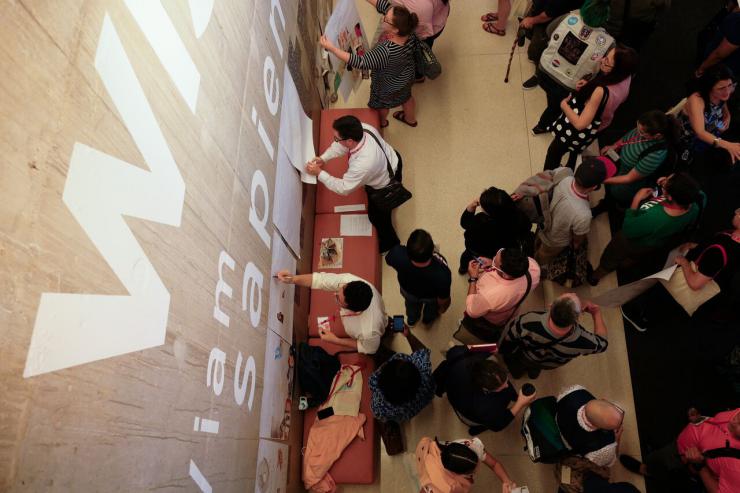 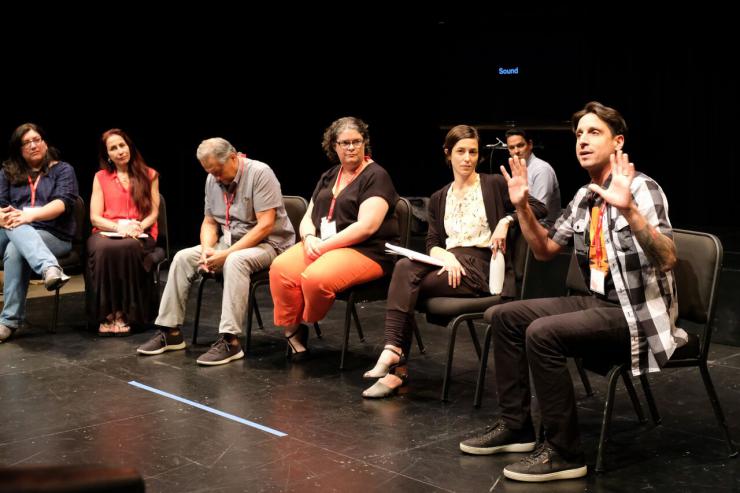 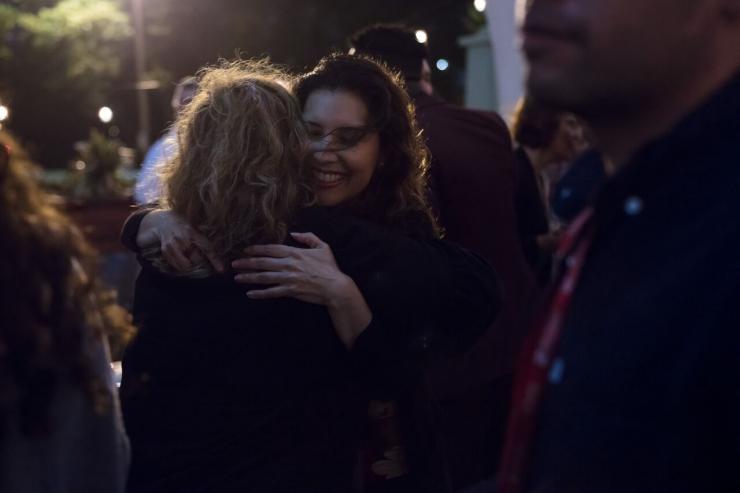 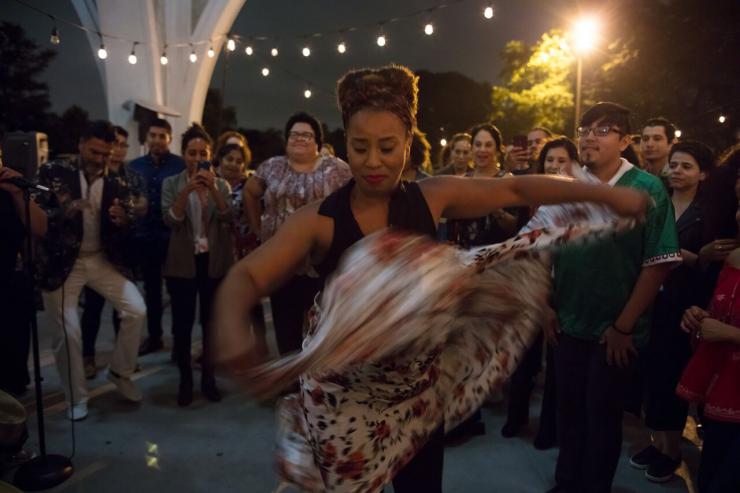