Recommended
Devising Our Future
HowlRound Theatre Commons
Most Discussed
Designing Collaboration: In Search of a Taxonomy of Collaborative Methods
Emily McConnell
Most Watched
The Gathering from the CrossCurrents Festival
Wednesday 4 May to Saturday 7 May 2022
Upcoming
Livestreaming a Conversation: #DeafWoke with John Autry II
Friday 20 May 2022
Essay by
Garret Jon
Groenveld
"The Hummingbirds" Internationalist World Tour

My play The Hummingbirds won the Internationalists Global Playwriting Contest. The award grants at least six different presentations in six different countries over the course of the next year. My goal is to attend each of them and share my experiences on HowlRound through this series. See my previous posts here. 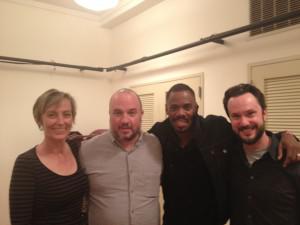 It was a nice Bay Area reunion, as I’ve known and worked with both Julia and Colman for many years. It helped that we didn’t have to get used to each other, since there’s never enough time in the seven hours of rehearsal leading up to the reading. We were comfortable enough to speak and challenge each other, and Doug fit right in.

Colman is a multiple Tony nominee, budding film star, and just about the busiest person I know. But in his early days in the Bay Area, he directed and acted in many of my early short plays as a part of PlayGround, including a memorable piece that became a part of my play Missives. I’ve always admired his drive and positive energy. Julia and I also came to know each other through PlayGround. I remember seeing her a few years before I got to work with her in a production of Edna O’Brien’s Triptych at the Magic in San Francisco. She’s now working in the Bay Area and New York, but she should be working in New York all the time. She’s done many readings for me, and I always admire her work. Julia also has a special connection with The Hummingbirds—she played the original number TWO in the first public reading in June 2011.

In a reading, as a playwright, I want the actors to make a choice (it sounds basic, but it’s harder than it sounds). Both Julia and Colman always make a strong choice—and it pushes me as a writer to see what the part can bear. We did the usual read through and text work in the morning. After seeing the show in foreign languages, it was good to dig back into the play in English with skilled actors to see if there was anything that really needed fixing. For the first time, I don’t think I wanted a word changed. The play really works.

In a reading, as a playwright, I want the actors to make a choice (it sounds basic, but it’s harder than it sounds). Both Julia and Colman always make a strong choice—and it pushes me as a writer to see what the part can bear.

The Hummingbirds has a unique structure—you can cast it with actors of any age, race, or gender to reflect an issue in the area or lend a subtle subtext through casting choice. Despite casting a white woman and an African American man as ONE and TWO, this time around, we didn't explore race or difference in race. As Doug said when we talked about it recently, "I don't really think about it any more, unless the play itself is specifically about it." However, if we were doing the play in an area where race was a hot button issue, this casting combination could explore that, and it could serve as a jumping off point for conversation.

In the afternoon we put the play up on its feet and made some other discoveries. Colman took a different tactic than I’ve seen for the last arc of TWO—TWO gave up before finding a glimmer of hope. As ONE, Julia dug into being mean at the very end—I’ve seen other people try this, but Julia was like a cat with a mouse, showing us a subconscious joy in the torture. I admired how Doug steered the whole process effortlessly.

It was a great reading, and it was over too quickly, as readings always are (unless they go badly, then they’re not over soon enough).

Afterwards when we were heading across the street to have a bite to eat, I ran into my pal and fellow playwright from San Francisco, Eugenie Chan. She was in New York to do a workshop around the corner at New Dramatists. Eugenie knew the play from our days as Writers in Residence at the Playwrights Foundation in San Francisco. It was another full circle moment.

Updates on other Cities Presentations:
Berlin, Germany. It looks like we’re going to have a presentation in Germany in German, the third week in April (the third premiere in three European countries in three weeks). A lot of translators are saying that English humor doesn’t translate well—it may not, but nevertheless we’ve found someone who is trying. The show will likely go up at the Tik Nord, which is right in the center of the Punk and Anarchist kiez, and right next to one of the most famous squatter houses in Berlin. To quote director Jake Witlen, “It's a rough neighborhood filled with people angry at the system, fighting for their freedoms, and generally living the real Berlin life. I'm really happy to be playing there.” I am too.

Bucharest, Romania. The rolling production of The Hummingbirds continues in Bucharest, with performances set so far at four different venues. Audiences have continued to react favorably and we’re moving into the potential of a sit down theater.

Zoetmeer, The Netherlands. After thinking the show was dead, this presentation seems to be back on for April. It will now be in Zoetmeer, a smaller town outside of The Hague. In English, the town’s name means Sweet Lake, but there hasn’t been an actual lake there for over four hundred years. It will be in Dutch, and as the son of a Dutch immigrant, this will be very special for me. As I understand it, the play will perform in an office-theater mixed use space. I hope the theater can handle two presentations, because I could probably sell out one full house with members of my family! 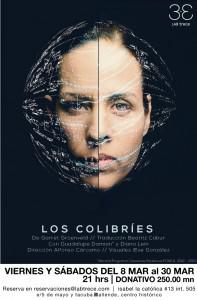 Mexico City, Mexico. After a successful reading in September, we’re bringing the same cast back for a full production by Serres Communes at Lab Treces, and it will be done by the same wonderful actors, Diana Lien and Guadalupe Damien, and will be directed by the very talented Alfonso Cárcamo. We’ll open in and run the entire month of March.

Zaragoza, Spain. We’ve lined up a strong chance of a production here. The challenge is not the will of the theater or the artists involved, but the Spanish Government’s recent tax policy changes. They have just instituted a 22% tax on theater. A lot of producers have been scared off by this crippling tax burden. Many theaters have chosen to offer free tickets, and sell carrots instead. The carrot tax is only around 7%, so patrons each buy a carrot as a means of admission!

New York
U.S. by State
Most Discussed
Designing Collaboration: In Search of a Taxonomy of Collaborative Methods
Emily McConnell
Most Watched
The Gathering from the CrossCurrents Festival
Wednesday 4 May to Saturday 7 May 2022
Upcoming
Livestreaming a Conversation: #DeafWoke with John Autry II
Friday 20 May 2022