“Miss, these cumbias are dope. They remind me of my dad.” A middle school student sitting behind me says this to her teacher as we await Su Teatro’s production of Milta Ortiz’s Más, directed by Anthony J. Garcia, at the Su Teatro Cultural and Performing Arts Center in Denver, which ran March 9-25. Latinx students from Denver middle and high schools fill the theatre to capacity for a matinee performance of Su Teatro’s Cultural Arts Education Program. This student’s appreciation and claiming of the pre-show cumbias resonate deeply with the themes of Más; they also echo the mission of Su Teatro, which has an over thirty-year legacy of bringing Chicano teatro to Denver audiences.

Ortiz’s play, heightened by Garcia’s direction, utilizes cornerstone techniques of Chicano teatro, many of which may be traced back to El Teatro Campesino, the performance collective that inspired the original founders of Su Teatro, including Garcia.

Dramaturgically structured as a docudrama, Más chronicles the teachers, students, and community members who struggled in 2011 (and continue to struggle) to keep the Mexican American Studies (M.A.S.) program alive in the Tucson Unified School District. The Arizona legislature’s passage of House Bill 2281 effectively eradicated the innovative program by banning its curriculum and books. Taken directly from interviews Ortiz conducted with community members, the play stages how those involved with M.A.S. struggled to save the program that affirms Mexican American identity through a curriculum steeped in social justice pedagogy. 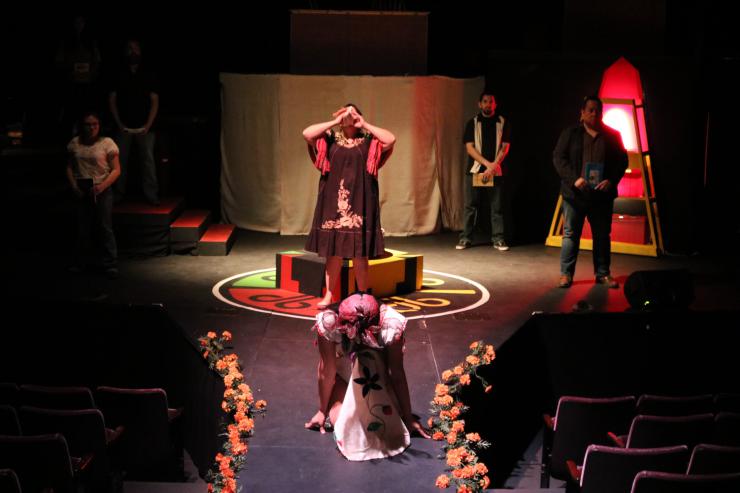 Ortiz’s play, heightened by Garcia’s direction, utilizes cornerstone techniques of Chicano teatro, many of which may be traced back to El Teatro Campesino, the performance collective that inspired the original founders of Su Teatro, including Garcia. As Garcia explained in his opening remarks for the performance, “Su Teatro cares about this story. This is the story of our community. We would have first developed it if Tucson hadn’t.” Similar to works by El Teatro Campesino and other performances produced by Su Teatro, Ortiz’s play is grounded in Chicana/o indigenous epistemology and healing. The performance featured indigenous dance, choreographed by Carlos Castañeda, signaling Mexican Americans’ indigenous roots and offering avenues for healing and ceremony; dance also organizes some dramaturgy of the play. Garcia incorporated live drumming (Angel Mendez Soto) and native flute (Jared Ranes) not only to invoke indigenous ceremony, but as Garcia explained, to underscore indigeneity in the Americas. Moreover, indigenous music and dance functions as resistance to the continued anti-immigrant narrative that positions people of Mexican descent as recent arrivals to the US. 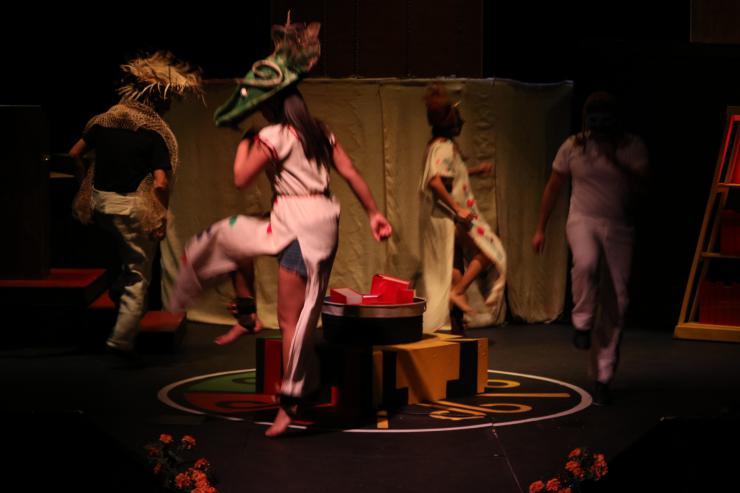 Prominently present throughout the production are the seven Latinx authored books banned by the Tucson Unified School District. In the opening, they sit on a bookshelf in the shape of a pyramid, which functions as an altar. These books are animated with light: made of red plastic, they glow. In the play’s opening, M.A.S. activists place these books in a Temescalli fire pit, aligned with the cardinal points. By the play’s end, the student characters face the audience and hold the actual banned books above their heads and invoke the many ethnic studies programs that have flourished across the nation. Throughout the play, images of the students’ political actions are projected onto screens built of Burlap sacks; many of the set design pieces have been recycled from other Su Teatro productions, adding a rasquache aesthetic—or a Chicana/o sensibility of resourcefulness—to the production. 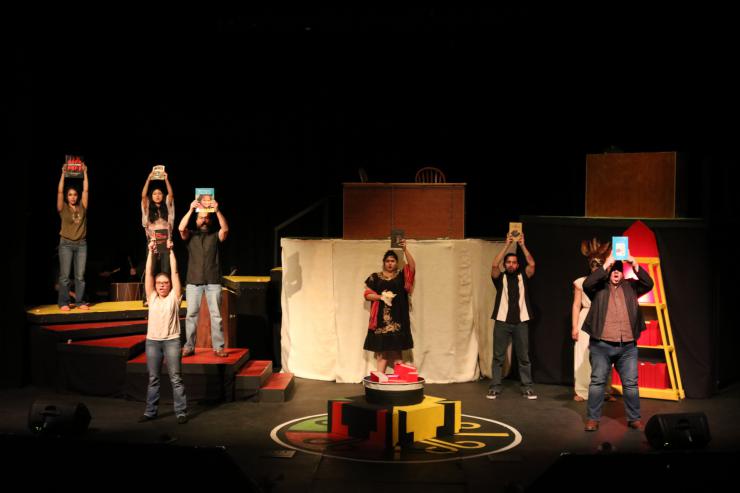 Unlike the now well-known documentary film Precious Knowledge (2011), which chronicles the M.A.S. program’s development and struggle, Ortiz’s Más amplifies the differences and divisions between the community that grew as the fight against House Bill 2281 lengthened, as well as its often-overlooked gender dynamics. The play highlights the controversial incident of gender violence perpetrated against one of the female students by one of the documentary’s filmmakers. As the M.A.S. student activist character Jen (Sierra Fernandez) remarks “the millions of dollars and resources focused on destroying a community for so many years…leads to in-fighting and deep divisions in what was once a unified community.” Or, as another character reflects, “Seven years of battling does something to people.”

Drawing from the teachings of the M.A.S. program, Ortiz shows that theatre can be a vehicle for “redemptive remembrance,” an idea gained from Paulo Freire. Voiced by the character Rudy (George Zamarippa), a co-founder of M.A.S., the idea of redemptive remembrance proposes, “we have the capacity to continually redeem our humanity through the reflection upon our actions.” 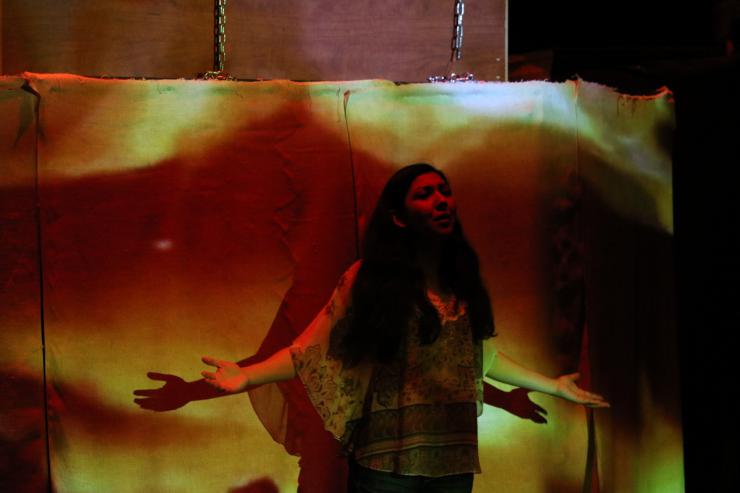 Ortiz’s docudrama grounds this focus on redemption and reflection through a Chicana feminist perspective of the M.A.S. struggle. Más does not elide the story of the young student activists’ double-pronged struggle as women: both battling to save their program and fending off misogynistic actions. Instead, the play highlights how violence confronting the M.A.S. community becomes internal when a M.A.S. student, Flor, is sexually assaulted. Garcia’s direction illuminates this moment by showing clips of the Precious Knowledge documentary stage left and allowing Flor (Iliana Barron) to stand in front of the film to tell her story of assault. Through the use of flashback cinematic techniques, Flor narrates her experience three times, closing dramatically with: “If the media gets a hold of this it’s going to ruin us.” Más thus highlights how the student-led battle is quite fragile in the face of dominant forces; women breaking ranks to identify their oppression would endanger their community’s larger political fight.

A focus on redemptive remembrance resonated strongly at Más’s premiere at Borderlands Theater in Tucson, Arizona in September 2015 (directed by Marc Pinate), where many of the students, teachers, and community members directly affected by the struggle were in attendance. Más’s performance outside of Tucson allowed the play to find interanimations with other Chicana/o activist spaces and our current political moment. To relate this story of political activism, trauma, and its impact on the health of a community for Denver, Su Teatro’s production concluded with an image of Rodolfo “Corky” Gonzales, an iconic leader of the Chicano Movement in Denver; Gonzales once explained to Garcia that all his years of fighting a system took a toll on him and others both psychologically and physically. Many of the actors in Su Teatro’s production also remarked that increased xenophobia, fear, and discrimination against Latinx communities, as well as censorship of the media, inspired their commitment and passion for this project. Thus, while far removed geographically from the political fight and fractures of those involved in the struggle in Tucson, Su Teatro’s production illustrates how Chicana/o theatre, by tying past and present struggles, enables the dynamics of our current political moment to come to the fore.

For the Latinx student excited by the music of cumbias prior to Su Teatro’s production of Más, Ortiz’s play functions as an important pedagogical text of recent history. Cumbias become the sonic signifier that communicates that theatre can be a space where her cultural identity and history are represented. As Latinx theatre practitioners continue to endeavor to represent Chicana/o history and culture, Más underscores the importance of persisting in telling these culturally affirming yet all too often elided histories and struggles.

Great coverage of an important, necessary play/performance, Marci! Having seen a reading of MAS in 2015, I enjoyed reading more about how the show has developed and how it is being used as a way to engage students in Denver. Well done!

Powerful uses of theater. Did the show or talk-backs involve the audience in some Freire-Boal way? Audience members must have been bursting with their aligned experiences.

The Sacred Theatre of Barrio Stories

Director Marc David Pinate discusses his process for Barrio Stories, reflecting on how the production is an example of sacred theatre.

Collaborating with Community in Barrio Stories

In this second installment, Milta Ortiz discusses her role as the project’s coordinator, and overviews the production process of Barrio Stories.

Lessons I Learned the Hard Way

In this installment, Scenic Designer Tara Houston shares her journey to discovering her career and offers advice on lessons that she’s learned along the way.