Are You Okay? The Best Accommodation Out There

I’ve been asked this glorious question once in my entire life while working in the theatre. It’s one of those times in your life where you remember exactly where you were and what you were doing. I was sitting in a seat at the Hollins Playwright's Lab waiting to watch a Wednesday night lab reading. My tics were pretty bad and when that happens, I take a place in the back so that sound doesn’t carry. One of the visiting professors that year sat down a few rows in front of me. He saw me in the back row, saw the state I was in, and walked back to my seat.

All I did was shake my head and say, “No, but I’ll get along fine.”

And to my surprise the professor looked at me and said, “Alright, feel better.”

And with that he provided the best type of verbal wheelchair ramp that artists and patrons with invisible disabilities could ever have. In three sentences I stumbled upon the best infrastructure change staff can implement to make the theatre way more inviting to all people.

It’s a great thing to accept that a lot of people, regardless of their disability, just aren’t okay sometimes…People had whole lives before they showed up to buy tickets; they had fears and doubts, triggers and traumas.

No one, in all my years of the theatre, had ever asked me if I was okay. I've had people asking me to stop what I was doing, I've encountered people who wondered why my tics were acting up just as the curtain rose, and I’ve had a number of people give me uncomfortable stares, but no one had ever asked me if I was okay. This is amazing because it not only tells me that the theatre is interested in my well-being but it gets over the myth that the theatre is only open to those people who are “okay”—people that only conform to an unwritten social, academic, and moral code. And it’s a great thing to accept that a lot of people, regardless of their disability, just aren’t okay sometimes. Audiences are dealing with things, both internal and external. People had whole lives before they showed up to buy tickets; they had fears and doubts, triggers and traumas. They may be uninitiated into the special code of conduct we have and come wide-eyed with amazement and wonder, not knowing that they might be breaking a precious code.

Take trigger warnings, for example. It is unrealistic to assume that when you have a play that deals with issues like rape, violence, or gender or racial injustice that this fiction onstage isn’t too close to the reality that someone has endured outside the house. We place warnings about smoke, flashing lights, and gunfire because we don’t know everyone's brain chemistry. We don’t know which audience member has epilepsy and which has PTSD, so we provide these warning in case the fiction might hit too close to home or inflict damage on people. In those cases it's only responsible to assume not everyone is going to be okay. Where can we expand this thinking to make sure we apply the philosophy to everyone?

Asking is only the first step, though—it’s important to follow up with listening to patrons’ answers and letting them know that you value their opinion. When was the last time that we talked to our community members and asked them if there was anything we could do to help? When was the last time that we saw them as a community and not ticket paying patrons? In the realm of new works this is always an ongoing struggle, and I too commit the sin of dismissing feedback from someone I deem as “radical” or has a “chip on their shoulder.” But people walk around with these brains inside their heads that we can’t see and whether that brain is disabled or not our work hits each of the brains in a different way. Theatre hits people in the emotional core and we need to listen to what's hitting them there. It's not always bad that it hit them there but it's important to take that information and apply it to what you do next. 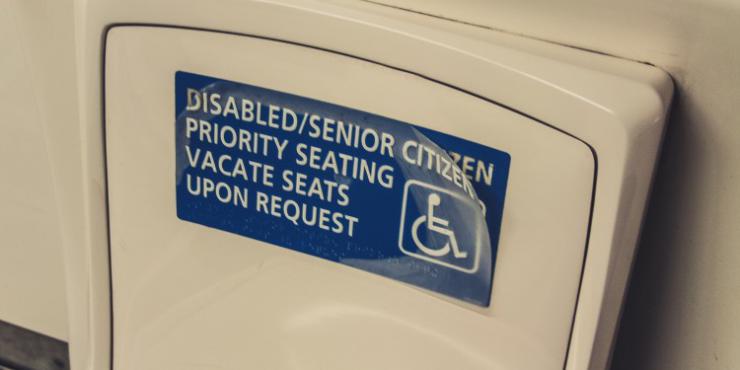 After you take the feedback, know that sometimes the best thing you can do is walk away and leave people be. In the case of my professor, he took my cue that I would be fine during the reading as long as everyone else could bear me. That didn’t mean that he did nothing. That means that he decided to not be a part of the problem. Sometimes that decision is the best that you can make. Sometimes you’ll take feedback and know that you need to plan some modifications to the structure of the building. Sometimes you’ll take feedback into planning the next season or revising company policies. However, sometimes you just have to stop adding to the problem yourself and discourage others from getting into the fray.

With three little words we can open up our hearts and minds and show the world that we care. We can make the theatre about coming together as a community again, no matter your ability, or desire, to conform to an unwritten standard. And so the question that I ask to you, the theatre world, is, “ Are you okay?”