Time, space, and support: with those, any playwright can be brilliant—at least a good bit more brilliant than without. La MaMa Umbria, a retreat in the Italian countryside, strikes a perfect balance between these elements. Outside your window, a flower box packed with geraniums, a valley dotted with olive trees. Sheep. A broad swath of sky that stretches across the valley and becomes a swirl of lavender at dusk. All you have to do, for ten days, is look at beauty and create. If you need to talk your ideas through, you have a teacher available, ready to listen and help. If you want to hear your pages read aloud, supportive comrades will oblige, then drink wine with you at night to a chorus of crickets and cicadas, the only loud nightlife around. La MaMa Umbria houses directors, playwrights, and actors for symposia and retreats in an abandoned convent, bought and renovated by La MaMa founder Ellen Stewart after she won the MacArthur Genius Grant. I was at the playwrights retreat this past August, which focused on theater for social change and community engagement.

Teaching artist Catherine Filloux led the retreat, tailoring it to the needs of those present. She allowed retreat participants to decide together how our days would unfold. The only programmed activities were talks by Cindy Cohen, director of the Program in Peacebuilding and the Arts at Brandeis University, who visited La MaMa to speak with us about theater in war zones, and Jessica Litwak, a teaching artist in La MaMa’s directors symposium who stayed after her program ended to talk with us about her work. We learned about Jessica’s involvement with The H.E.A.T. Collective, which merges theater, therapy, education, and activism. We also learned about freeDimensional, which provides emergency funding to artists in danger. Cindy and Catherine explained their work with Theatre Without Borders. From Cindy’s talk, I have no notes—I was too transfixed to write.

Other than some group writing exercises Catherine had us do to begin our week—which were remarkably generative—the ten of us on the retreat spent the vast majority of our time working on our own projects. The closest town, Spoleto, was ten minutes away by car. On our wooded hillside, we were safe from the siren song of cafés, gelaterias, and shoe shops (although we did make several trips into Spoleto as a group and thoroughly sampled its pleasures). With no demands made of us—no house chores, cooking, or anything at all, other than writing—many of us produced twenty-five pages or more of new work. We had our meals together, met as a group in the morning after breakfast to discuss the coming day, and met in the afternoons to hear the pages of anyone who wanted to share work. Every such meeting was optional. Some preferred to hole up and write. 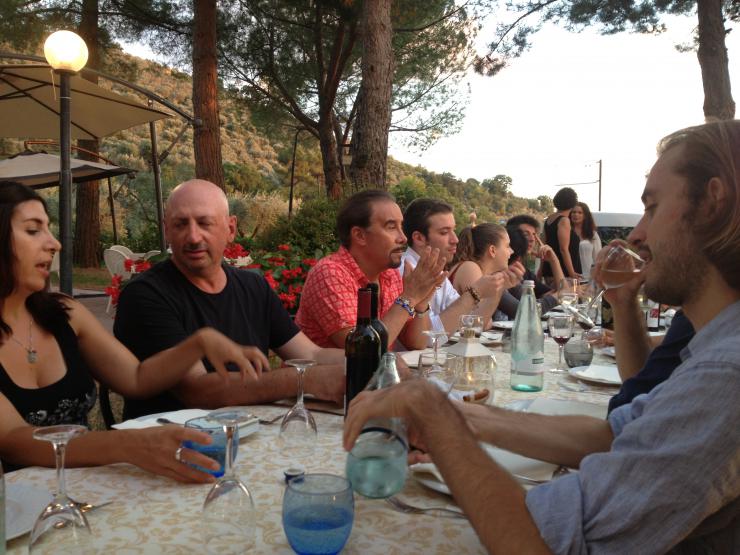 Our productivity was fueled by excellent Italian cooking, prepared by a chef with fresh ingredients from her farm up the road. The wine was good and plentiful. The coffee was strong. I have fond memories of roasted peppers, grilled eggplant, and an especially delightful pannacotta. One night, after a tour of Assisi and Deruta, we had a phenomenal dinner at a castle, hosted by the Count of Amelia. Fortunately, behind our converted convent, there were plenty of trails through the woods and olive groves and plenty of very steep hills to climb.

By the end of the retreat, my clothes were only a bit tighter. My new laptop computer, empty when I arrived, had a thirty-page draft of a play on it. I had a number of new friends. Above all, I had a warm feeling of having been cared for, respected, and nurtured. David Diamond, La MaMa Umbria’s director, and Mia Yoo, La MaMa’s artistic director, served our plates themselves at each meal, asking us what we wanted. That gesture reinforced that their role, and by extension, the role of La MaMa Umbria, was to nurture us—to give us what we needed. And they did, accommodating participants’ various needs and whims without complaint. For example, a couple of people at the retreat went for a walk and got lost, wandering for four hours through the woods and fields before finding a road and flagging down a car. The good Samaritans drove them to a hotel in Spoleto, where an English-speaking staff member called David. During their wanderings they had fantasized about lemon sorbet. David, who could conceivably have been irritated at having to pick them up, who could very well have scolded or mocked them, took them instead to a gelateria for—yes—lemon sorbet.