November 18, 2015. I walk into a theatre to see a musical. I bought my tickets in July, four months prior. Everyone I knew said, “Go. Just go!” I hadn’t heard the music, I didn’t know the premise (okay full disclosure, I had a sneaking suspicion it might have something to do with Alexander Hamilton), I sat all the way at the top, all the way against the back wall. I heard that opening riff, I saw those actors appear onstage. Immediately I got tears in my eyes. 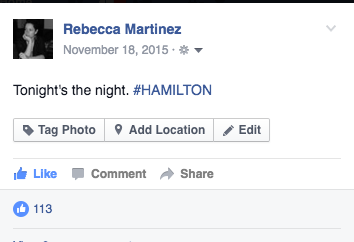 I was born in Denver. My father's family came from southern Colorado and northern New Mexico, from a time when the border between those two states was still fluid. My grandfather held a variety of jobs, including working on a sheep ranch, being a cook for cowboys, and working on the railroad. My father, one of eight children, worked with his family as migrant workers in the sugar beet fields. They were hardworking and poor; often their meals consisted of a pot of beans and almost enough flour tortillas to go around. On paydays, the family would get a special treat of white bread sandwiches, potted meat, and maybe a Pepsi. The family moved to Nebraska and finally found some financial stability working with the National Guard. My father attended college, but didn't finish. My older sister was the first person in our immediate family to get a university degree of any kind.

Growing up, my father would often tell us a story about how our family descended from Spaniards who were given land grants in what is now New Mexico, but then lost the lands once the United States took that part of the country.

Growing up, I heard the stories of our First Nations great-grandmothers, whose tribes we’ve never known because somewhere along the way the knowledge was hidden or lost.

Growing up as the only Latinx family in our small Nebraska town, we were known as (now, whisper as you say this) “the Mexicans.” Even though I was born in this country, even though we had never lived in Mexico, even though my father’s family has lived here for generations, even though my Czech and German mother was born on a farm only twelve miles away from where we lived.

Growing up, I was taught the history of the United States; the history of the first settlers from Europe (primarily the English). I memorized all those important dates like 1776. I learned about the ideas of Manifest Destiny, westward expansion, the Homestead Act, free land, and opportunity for all. I learned about the Indian wars and the Indian problem and the Bureau of Indian Affairs.

It’s complicated to live in the only country you’ve ever known, a country that tells you, generation after generation, you are not wanted.

In college I took a class on the history of religion in the United States up to 1843 specifically because it was described as including First Nations history. I was sick for the first class and when I showed up for the second, we had already moved on to the Puritans.

As an adult I came across history I had never heard before. I memorized a new date: 1848, when the Treaty of Guadalupe Hidalgo was signed ending the Mexican-American war. Residents in what is now California, New Mexico, Arizona, Nevada, Utah, Wyoming, and Colorado were given a choice: get out and move to Mexico, or stay and receive American citizenship and full civil rights. Over 90 percent chose to stay and become US citizens. My family stayed. No cruzamos la frontera, la frontera nos cruzó. We didn’t cross the border, the border crossed us.

As an adult I learned that when my grandmother was little, in the early 1900’s, she lived on a ranchito near the New Mexico border called Las Aguitas. It was a small existence, a little farming, a little ranching. One day the family was told the original land deeds from Mexico were no longer valid. This land was no longer theirs. One day the family was told to pack up and leave.

As an adult I learned the term “repatriation.” I learned that in the 1930s over one million people living in the United States were put into custody, placed on trains, and sent to Mexico. I learned that 60 percent of those deported were US citizens.

As an adult I learned that my family’s first recorded birth in New Mexico was in 1702, thirty years before George Washington was born.

November 18, 2015. I walk into a theatre to see a musical about a bunch of white, male, founding fathers I’ve never had any interest in. Theirs is a story of a country that wanted my ancestors out, of a history I’ve felt little connection with. I heard that opening riff, I saw those actors appear onstage. Immediately I got tears in my eyes. I was like, “what the hell, why am I crying?”

In the days after watching this crazy musical, something switched for me. Now when I think of George Washington, I think of him as African American. When I think of Alexander Hamilton, I think of him as Puerto Rican. I hear the stories of this country coming from the mouths of this beautiful brown, ethnically-mixed group of performers and I see myself. Seeing this musical, this version of an often-repeated history voiced by people who are often ignored by history makes me want to rise up and make my narrative known.

It’s complicated. I come from the conquerors and the conquered. My family had land taken from them that had been taken from others. Outside of the southwest, my people are unknown, my history is erased, my narrative is unknown, my culture is unheard of.

It’s complicated to live in the only country you’ve ever known, a country that tells you, generation after generation, you are not wanted. Even with Barack Obama as our president, the message still seethes from many people in this country: we don’t want you here.

Like it or not, this country, with all its flaws and complexities, is where I was born and where I have lived most of my life. My ancestor roots go back hundreds, if not thousands, of years. And because of this musical, this country, which I never truly felt a part of before, has finally started to feel like mine.

This is such a powerful testimonio and speaks to the importance of representation in the arts. Thank you for adding your voice to the conversation, Rebecca!

Poignant. Rhythmic. Water that flows long and nurtures the deep roots of majestic árboles, your family, your story. A piece of dramatic artwork that evokes such poetic history surely will also stand the test of time. We were here. We are still here and will be here for the long run. All of us, whether native or naturalized, are stake holders. We belong. Here.

beautiful beautiful. so looking forward to seeing the show. 'how lucky we are to be alive right now...'

This is beautiful! Thank you for sharing this story. The line that stood out to me was "Like it or not, this country, with all its flaws and complexities, is where I was born and where I have lived most of my life." This hit home.

Ay, Rebecca! This brought tears to my eyes. I haven't seen Hamilton, but given how connected our identities are, it's eye-opening to read a perspective from someone like me. I think i actually get what all the fuss might be about. Thank you for sharing this with us.

“A woman kept alive by the sound of her voice”

The Femicides of Juárez in Isaac Gómez’s La Ruta

Trevor Boffone examines Isaac Gómez’s new play La Ruta, which focuses on the feminicides in Mexico, and talks about the growing canon of Latinx theatre that dramatizes and theorizes on gendered violence.

Carlos Morton questions whether Hamilton should be considered a piece of Latina/o theatre.