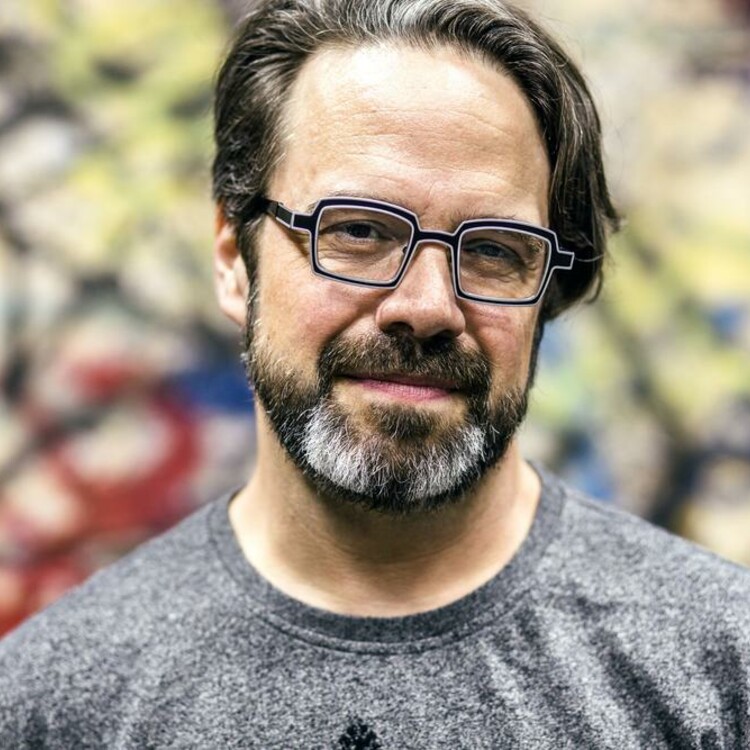 Imagine attending a theatre festival in an Eastern European country that’s about to inaugurate its first female president and finding a theatre community that is being led by women as directors, writers, and artistic directors. Imagine then that the women-led projects sweep all of the awards at the festival. Imagine now that you don’t need to use your imagination, but simply travel to the Nová Dráma/New Drama festival in Bratislava, Slovakia.

This year was my third time attending Nová Dráma on behalf of the Center for International Theatre Development (CITD), Philip Arnoult’s international collaboration initiative, and Baltimore-area Towson University, where I am a professor; I had previously attended in 2008 and 2009. As an invited guest, I was privileged to speak with several of the artists and organizers, including critic and Nová Dráma dramaturgy board member Zuzana Uličianska and Bratislava-based NUDE Theatre members Veronika Malgot, Lýdia Ondrušová, and Laura Štorcelová, whose work Love You and Take Care was featured in the festival and won the Audience Choice award. Through these conversations and the productions I saw, I got sense of how women—like Vladaslava Fekete, the festival director and director of the Theatre Institute in Bratislava, and Júlia Rázusová, the award-winning director and artistic director based in the eastern Slovak city of Prešov—are coming to define Slovak theatre in the capital and beyond. 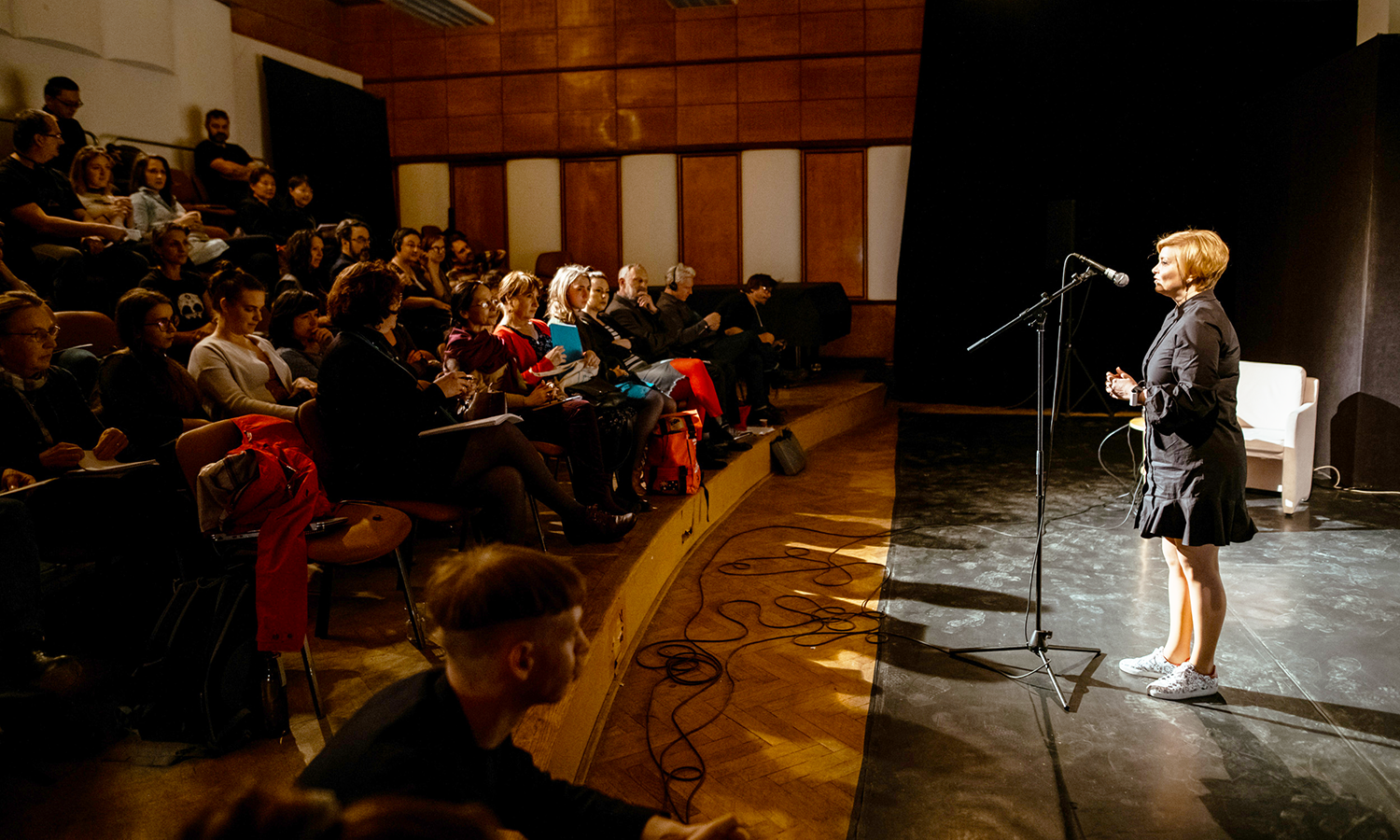 Fekete’s Vision: A Festival and A Conference

Fekete, a dramaturg and scholar, has been the festival director of Nová Dráma since 2006, one year after its founding. For the annual festival, Fekete and a dramaturgy board curate the best contemporary drama from around Slovakia, offer an international focus, and host an academic conference. Over the past fourteen years, Fekete’s forward-thinking leadership has been bringing artists, critics, and leaders from the theatre world to Slovakia—this year the events were attended by guests from twenty-three countries, and in 2020 Nová Dráma will host the International Association of Theatre Critics (IATC) Congress, bringing nearly 120 critics from around the world to the festival.

Nová Dráma 2019 featured ten cutting-edge productions from both state and independent theatres from the cities of Bratislava, Košice, Bátovce, Žilina, Prešov, and Nitra. Alongside the productions was an accompanying program that included panel discussions about the Green Drama program, which commissioned twenty-two leading Slovak playwrights (eleven of whom were women) to write plays addressing the climate crisis; a two-day conference on environmental and ecological issues in theatre, which featured scholars and artists from North America and Europe; and the annual international program, this year Focus: Greece, which continued Fekete’s practice of engaging international artists to share their work and practices. All of the events were presented in Slovak or English, or translated into English or Slovak via supertitles or live translations.

By looking at the five productions in the festival that were directed by women, we can get a good sense of how women are shaping Slovak theatre at Nová Dráma and beyond.

Fekete’s forward-thinking leadership has been bringing artists, critics, and leaders from the theatre world to Slovakia.

Love You and Take Care directed and written by NUDE Theatre

NUDE Theatre is a site-specific company whose work draws audiences to cafés and apartments around Slovakia’s capital. Their production Love You and Take Care presents four monologues about unspoken taboos of motherhood: the effects of social media on a new mother; a mother left isolated in her home surrounding by the cold, ticking seconds of post-partum depression; a provincial mother’s hopes for her adult daughter living in the city and having a child of her own; and how a friends-with-benefits situation led two people to becoming parents and partners.

Helmed by Malgot, Ondrušová, and Štorcelová, NUDE Theatre is a woman-centric collective dedicated to making work as a “three-headed dragon” rather than as an organization led by a single individual. Their work celebrates and investigates their lives as mothers and women, from societal expectation to social media. Love You and Take Care’s evocative, honest portrayal of being a mother in the twenty-first century resonated with Bratislava audiences enough to win Nová Dráma’s Audience Choice award, and it would surely resonate with mothers, and parents, around the world. And with Slovakia providing up to three years of maternity leave, perhaps this is a story that parents in the United States need to hear.

End End was devised by Petra Fornayová, founder and artistic director of Nu Dance Fest whose work straddles the lines of theatre, dance, and technology. The production was indeed a melding of dance, poetry, and projections; in it, Fornayová presents herself as a character navigating the aftermath of love.

Fornayová and her male counterpoint, Vlado Zboroň, work to find an exit strategy for their relationship among the lines of projected blueprints and mazes. The distance between them is a space that Fornayová explores with movement, countering Zboroň’s stillness with searching. What sets this work apart is that Fornayová develops her own dramaturgy and language so that, through dance, she is able to cultivate the cold, alienated feelings of futility at the end of a relationship, the end of a whole world. 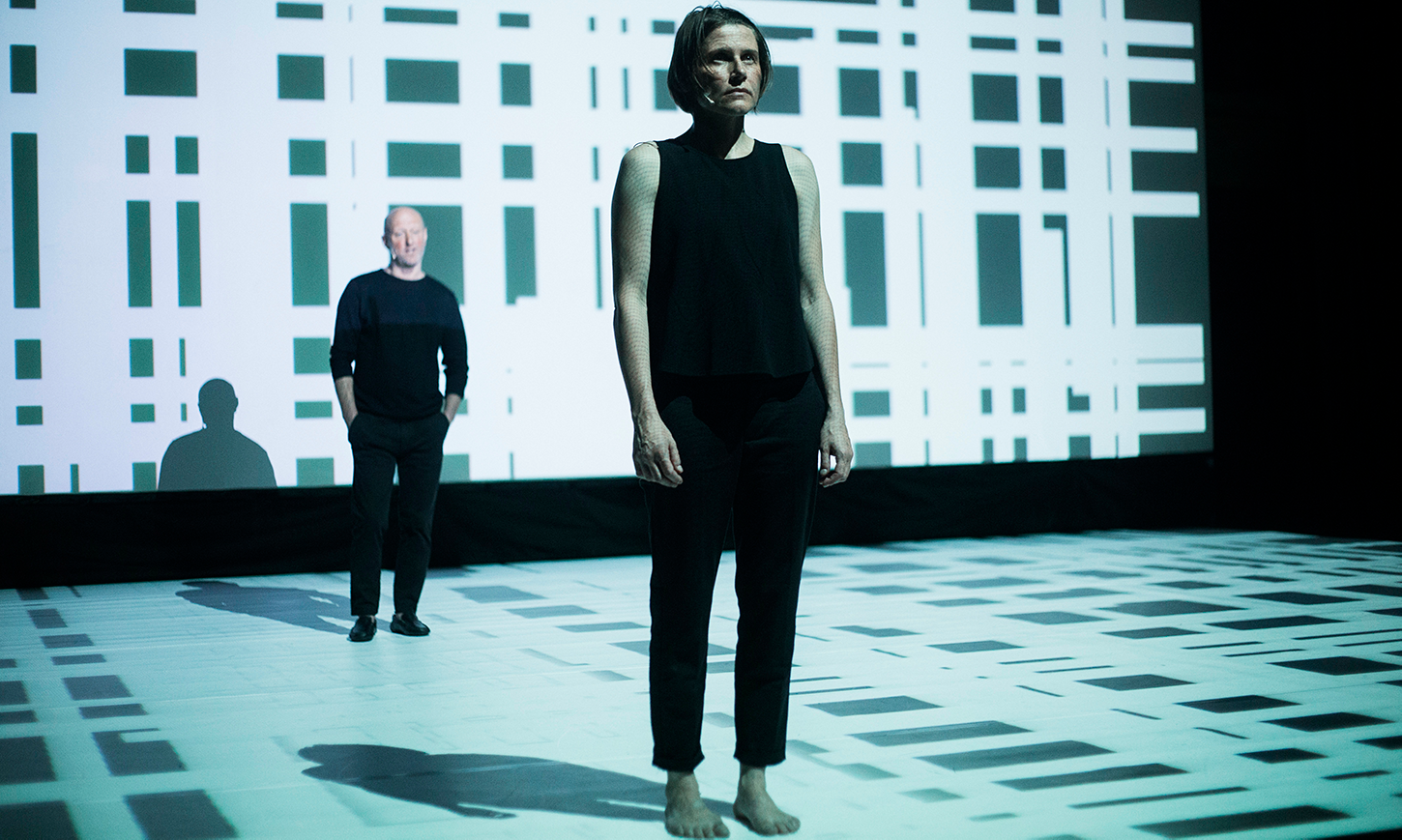 The Emperor of America directed by Iveta Ditte Jurčová

Produced by Studio 12 (Bratislava) and the Pôtoň Theatre (Bátovce), The Emperor of America was directed by Iveta Ditte Jurčová, co-founder and artistic director of the Pôtoň Theatre. Audiences were intentionally crammed into the backstage area of Studio 12; echoing refugees packed on a ship, we sat shoulder-to-shoulder in the venue, surrounding a rectangular dirt pit where the action took place.

The play is set during the Galacian migration of the 1880s and follows the story of brother-and-sister Mendel and Rifka Beck, who are swept up in the promise of a better life in America, facilitated by the fictitious, titular Emperor. When Mendel leaves for America, Rifka stays behind in the village, and we get a sense of how the women who remained stepped from a domestic role into a leadership role. As the story proceeds, the focus shifts to the tragedy of Rifka’s struggles, and the production ends with the image of her silently adrift in a glass coffin on a sea of dirt.

The audience was close enough to notice anachronisms, such as an actor wearing sneakers, connecting the migrant crisis of 150 years ago to today. To European audiences, this production must have spoken to the migrants crossing the Mediterranean, but through United States eyes it illuminated the humanity of those gathering at the southern American border, filled with need and vexed by the emperor.

Jurčová and Katarina Caková received a special jury prize for the video and production concept of The Emperor of America. Outside of Nová Dráma, the production also won a 2018 DOSKY Award for best production.

Ten years later and that landscape has changed: the women are still in the leadership positions but now they are well represented on the artistic side too.

With two productions at Nová Dráma—The Reunification of the Two Koreas and Moral Insanity—Júlia Rázusová, co-founder and artistic director of the independent Prešov National Theatre, is the focus of much conversation and attention. Rázusová is refusing to choose between being a director and being a mother, even if that means occasionally directing via video-conference. She only takes limited international commitments, her family travels with her when she is directing, and her husband takes care of their two children. As she noted in an interview with the newspaper SME Žena, “I can’t imagine directing and being without children for two months.” Rázusová remains an in-demand director, tackling pieces about relationships as well as contemporary cultural and social issues.

The Reunification of the Two Koreas is written by French playwright Joël Pommerat and produced by the State Theatre Košice. Rázusová’s physical production attacks the ambitious script and its fifty-two characters, taking the audience on an at-turns both hilarious and gut-wrenching ride. Embodied by three women and three men who face off in twenty scenes, it is an aggressive portrayal of modern love—or lack thereof. At Nová Dráma, this production took home the Student Jury award. In 2018, Rázusová took home a DOSKY Award for her staging of this production.

The striking monodrama Moral Insanity, based on a text by Umberto Eco and developed with Peter Brajerčík, was the second production directed by Rázusová and produced by her own Prešov National Theatre. The show takes on far-right perspectives in a haunting and provocative examination of racism—from the casual to the blatant. At Nová Dráma, Moral Insanity took the Grand Prix award. 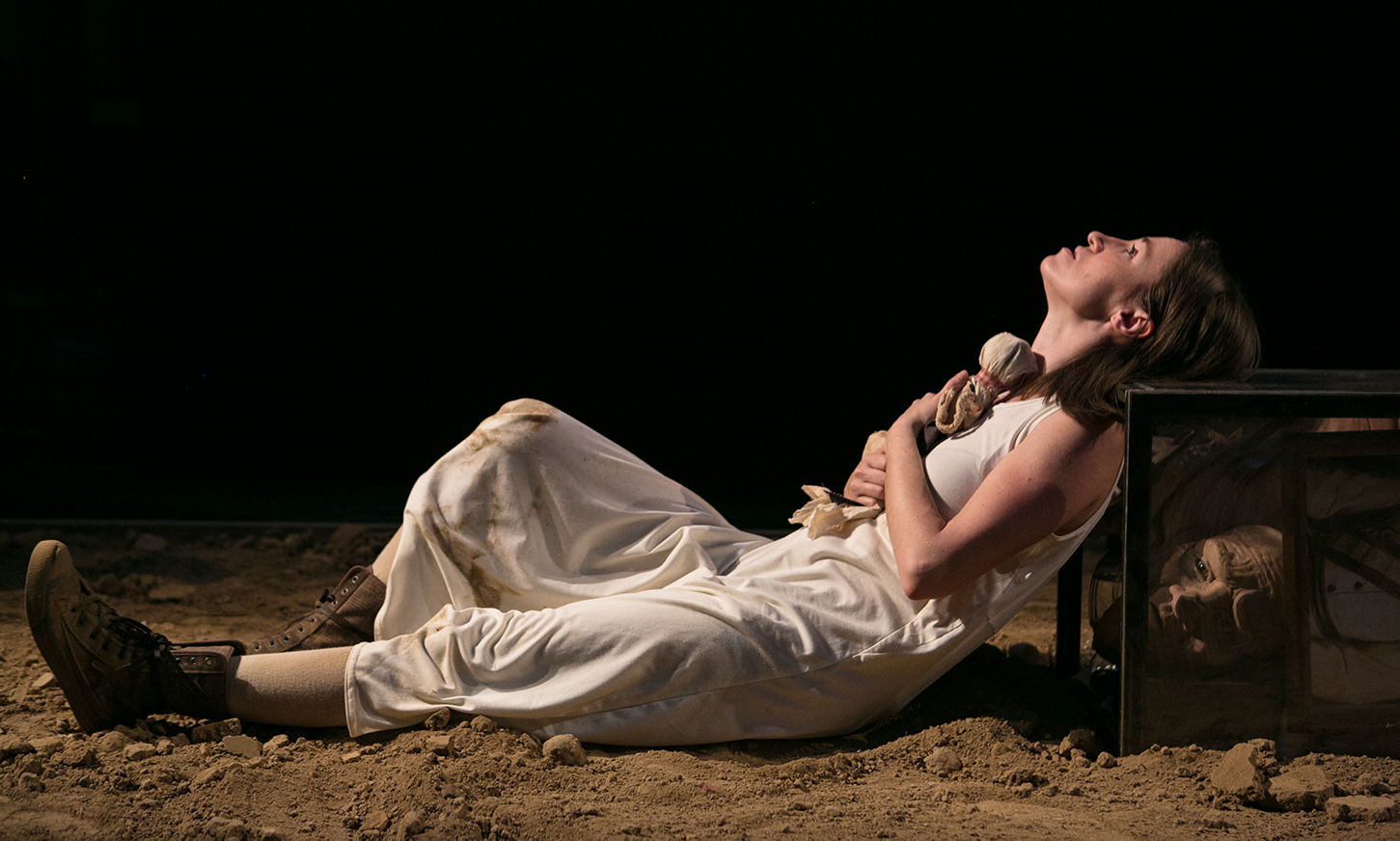 When I attended Nová Dráma a decade ago, I noted the overwhelming number of women in leadership roles—in 2008, all leaders were women, and in 2009, eleven of the fourteen positions were held by women—but the productions were lacking in parity for women as directors or authors. Ten years later and that landscape has changed: the women are still in the leadership positions but now they are well represented on the artistic side too.

While the main topics at this year’s festival were the environment, the Green Drama program, and Greece, it’s clear that women are creating some of the most compelling drama in Slovakia and the audiences and critics are there for it. It was refreshing to be at a festival where women are leaders and their work is produced and heralded, but where that is not the focus.