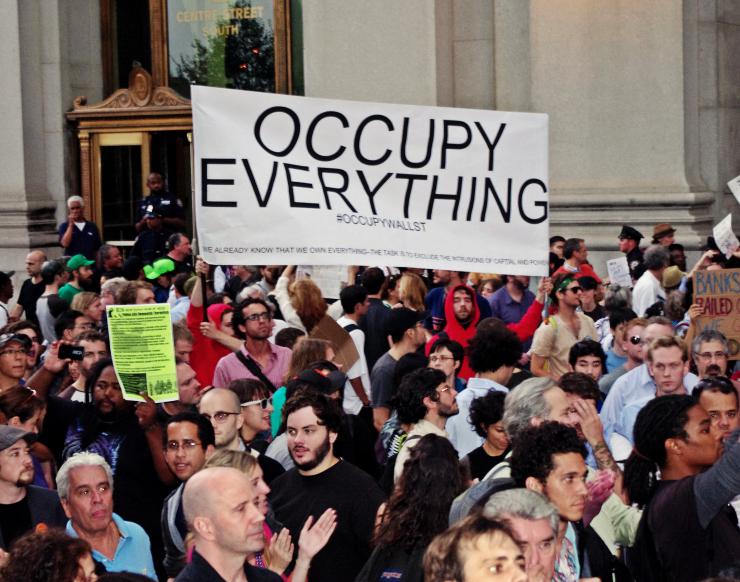 On October 15, 2011, I attend an Occupy Protest on the Streets of Albuquerque, New Mexico. We are effectively shut down by the cops, but not before I could see how many in my community stand in solidarity with the movement, how many can see through hype. Previously, I wrote plays that can be experienced on multiple levels, lightly or deeply, if you can see through advertising, conditioning, or not. I decide to commit myself to looking for opportunities to write for the 99%, for those who have removed their blinders. I decide not to care where these plays will be done, whether or not I will be paid, or if they would be good for my career, only that I can offer my work in support and solidarity with other artists who are committed to addressing the political concerns of our time. Here’s what happens.

Play One: La Frontera/The Border
Hybrid Theatre Works, “founded in late 2009 by Tracy Cameron Francis and J.J. El-Far to forge their common passions and backgrounds in theater and peace-building” puts out a call for artists to make plays examining Immigration for their Borderline Bushwick project, a site specific performance tour on the streets of Brooklyn.

I contact my long time collaborator, director Heidi Carlsen, to see if we could create a play about the impact immigration laws have on love relationships. She says yes. Hybrid says yes. I write a bi-lingual play (Spanish consultation provided by director Valli Rivera, from Puerto Rico) because my research reveals that Bushwick is the largest hub of Brooklyn’s Hispanic-American community, and most residents are from Puerto Rico, the Dominican Republic, and more recently, Mexico. Many passionate phone calls between Heidi and I land us on gender neutral story, which ultimately involves handing out passports to the audience which contain their “fate” or “su sino” (in English and Spanish), based on real immigration situations couples face. Eventually, this evolves into a love story between two women.

I decide to commit myself to looking for opportunities to write for the 99%, for those who have removed their blinders.

Performer Amanda Boekelheide ricochets off a building to begin my play, Maria Silverman crosses into the streets with her incredible cry, in English and Spanish, asking people on the streets of Bushwick how their families came to live in America. The play is then accepted in the Occupy the Empty Space Theatre Festival and performed September 8th at El Jardin del Paraiso in New York, and then at a benefit for Ingenue Theatre in support of staging new works by women. Organizers mentioned how uncanny it is that this play exactly addresses the concerns they wish to bring to their audiences. I am rather astonished that the humble, heartfelt play has been performed at three different New York venues in less than three months.

Play Two: Memorial
Erik Ehn, playwright and head of Playwriting at Brown University, puts out a call for playwrights to commemorate the 10th anniversary of the fire at the Station nightclub, which killed 100 people and injured an additional 200. Although I could immediately relate because my husband is a musician, I did not, at first think it was appropriate to write something.

Although my Portuguese grandfather immigrated through Providence, I have never set foot in the state of Rhode Island. It seemed an event for the many brilliant writers I know who went to Brown or live in Providence.  When I explain this to Erik, he completely disagrees. He says it is important to write from the perspective of distance I have (now writing from Vancouver, BC, Canada), to explore empathy, and witness from my vantage point.

I accept. I have never been more moved by the experience of writing and having a theater piece staged.

Many of those who died were of Italian or Portuguese descent, like my family. My piece became a dance between Memoria (memory) and Scordare (also known as forgetting, Olividar. Esquecer). Memoria pins memories of all those who died in the fire to her dress.

Sylvia Ann Soares, who worked in the New York Black Theatre Movement of the 60s, is 71, and of Cape Verdean descent (my family are Portuguese from the Azores) would be directing. I had never worked with a director from my cultural background before.

After the show, Sylvia wrote to me detailing that one of her friends was overcome by the play when she recognized her own friends and a cousin among the descriptions of those who had died. Sylvia further shared that “engaging others in empathy is powerful and enduring,” that “it reaches the lost, survivors and families.”.   Thanks to the Station Nation project, my ideas of community, the point of making art, of life itself, are greatly expanded.

Play Three: Change
After deciding to create a piece in response to Caridad Svich’s initial call for plays for the Gun Control Theatre Action, it took me a long time to find the entry point.

As the mother of an eight year old, I had a great deal of empathy for the Newton parents. Everyone picking up their children at elementary school, even in Canada, wore the weight of the tragedy on their faces.

I listened to my husband’s experience right after the shooting—he had just become an elementary school educator, and wondered what he would do if a shooter came to his classroom. I focused on a small moment in a teacher’s life, where she realizes that “it could happen here,” and she questions what she would do.

Recently I decided to read the play in Toronto, in order to stand in solidarity with International Gun Control Theatre Action Week. I wondered, would the Canadian audience appreciate this? While a very close colleague encourages me, another colleague admonishes, “It’s not our issue.” In Canada, we have gun control. Most profoundly object to, and are bewildered by, the situation in the U.S. Yet when I read the piece, the audience is deeply empathetic.

“Occupying” my plays has been a tremendous gift, and has made me re-consider whether or not we are actually powerless. The insight and hard work of the artists organizing these events gives us all agency. As my treasured colleague Oliver Mayer, playwright and Associate Professor at University of Southern California once wrote to me, “In these dark ages, we make our own light.” Let it shine.

A true artist. Creativity, masterful artistry, employsempathy in its re-creation. Compassion resides in that flow, as well. Acompassionate artist focused on life itself facilitates the flow of trulyhealing art. This is your way, Elaine Avila, you and like-minded artists. Thank-youfor your work---inspiring us to occupy life more!

"I decide to commit myself to looking for opportunities to write for the 99%, for those who have removed their blinders." We are like-minded in dedicating ourselves to lending our gifts and talents in service of shedding light in dark places. I hope to have a chai latte with you sometime to talk--though not at a Starbucks! Did you know, if you live in a state that allows public carrying of firearms, then Starbucks is the place to go to for your fancy-shmancy cup o' joe? That's right, they refuse to ban guns in their stores. Not exactly kid friendly, huh? So what do you say? Coffee at a local diner soon?

Thank you so much Yvette! And yes to coffee soon. :)