Essay by
Martha
Steketee
I joined the first three hours of a December 3, 2015 all-day meeting on parity in theatre, involving some two dozen women, one man, and a multitude of organizations, initiatives, and publications that work on the topic. “P” words seem to rule in this work lately—“parity” and “performance” and “patriarchy.” The day’s private meetings (one in morning and another in the afternoon) and a public livestreamed conversation fall under the action label of “Percolating Gender Parity.”

Numbers speak but sometimes we don’t stop to listen to them.

We talked about what we were doing, what we had learned, and what might be the next steps—the typical advocate worksheet tick boxes to mull through recent achievements and frustrations and to energize ourselves for the future. Call it “parity” or “equity” or simple “representation”—we all had something to say on the subject and were revved up to generate some action plans. For some, the work they discussed was out of passion (read: work without pay). For a few folks, this work constitutes their day job, their main job, their salaried position. And I was in the room to talk about data.
Data Gathering on Women in Theatre Continues Apace
Many recent national and regional US studies analyze the status of women in theatre. The familiar focus on playwrights and directors continues to find that male voices dominate seasons and positions of power. The Count published by The Dramatists Guild and the Lilly Awards in the Nov/Dec 2015 issue of The Dramatist reports analyses of 2508 productions from 1486 unique authors in 153 theatres across the United States over three seasons (2011-2012 through 2013-2014) and finds the work of women playwrights featured in less than a quarter (22 percent) of the productions studied. New findings from the ongoing Women’s Leadership Study examine various paths and obstacles to leadership positions in nonprofit theatres. National advocacy in recent years on behalf of playwrights has taken many forms, including the efforts of The Kilroys annual lists of work by women writers (46 in 2014 and 53 in 2015) recommended by playwrights, dramaturgs, and artistic directors across the country.
I co-authored the Women Count studies in 2014 and 2015, released by the League of Professional Theatre Women, that provide data on hiring parity in Off-Broadway theatres for playwrights, directors, designers, and other professionals not captured in many current research and advocacy efforts. The Women Count 2015 report analyzes employment for 13 professional roles in 455 Off- and Off-Off-Broadway productions by 22 theatre companies in five complete seasons, 2010-2011 through 2014-2015. Women playwrights range from a low of 28 percent in 2011-2012 to a high of 36 percent in 2012-2013, and are consistently much more common among “new” plays (plays with first productions in 2005 or more recent) than older plays produced by theatres tracked in the study. Rates of new plays by women range from a low of 32 percent in 2011-2012 to a high of 42 percent in 2012-2013. Directors range from a high of 40 percent women in 2014-2015 to a low of 22 percent women in 2011-2012. Lighting designs are overwhelmingly by men in many years (8 percent women lighting designer credits in 2012-2013) and costume designers dominated by women in many years (79 percent women in 2012-2013). 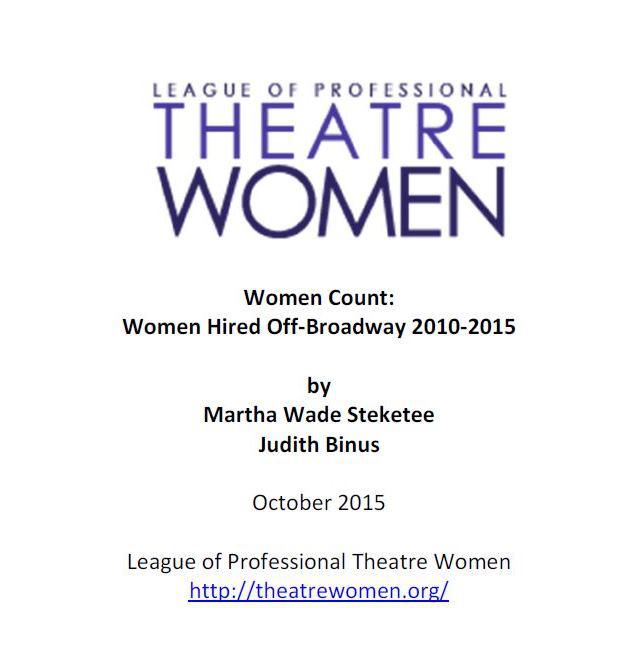 Back to the “Percolating Parity” Meeting Room
It was illustrative that the topic of data, which underpins change efforts in any field, was initially left off the agenda of the December 3 Percolating Parity meeting. The printed agenda’s initial discussion areas included unions and committees, awards and celebrations, festivals and productions, lists and networking, and advocacy—but data wasn’t listed. Several of us in the room had been invited to the session expressly to speak about our roles in ongoing data collection efforts on the status of women in theatre in areas around the country and around the world, so the topic hadn’t been forgotten in the planning. But this agenda detail illustrated how easy it is to step past the databases, the data details, the numeric frame for our sexier and into more energized conversations about bodies on stages and playwrights selected. Numbers speak but sometimes we don’t stop to listen to them.
After initial introductions in which a number of us discussed our current data initiatives, our hosts saw their oversight and asked the data folks to speak first. We touched upon the metrics, data categories, findings, challenges, and opportunities of our data work. Some of us reported that we have funding to support our initiatives while others rely on volunteered time and expertise to generate our findings. We discovered powerful energy to organize future in-person and on-line meetings to play out national data collection. Models from other data-rich, jurisdictionally-collaborative fields, such as juvenile justice, can be assessed, and interested individuals can learn from one another.
HowlRound contributors have been talking about the need for national and collaborative data collection for some time, and two particular writers in 2014 provide frames for our ongoing work in this area. Playwright Laura Shamas asked for a range of efforts—collecting data Off-Broadway and collecting data for designers and creatives other than directors and playwrights—which the Women Count study has begun to address.
Gwydion Suilebhan wrote in 2014 of the need for a single study:

[A] single, ongoing, comprehensive look at gender parity and diversity. One analysis that covers more than just TCG member theatres, more than just the nation’s largest (and most well-heeled) theatres, and more than a few cities. One data project that will allow us to say that we’ve really looked into every corner of the American theatre and seen what’s there.

Regions and cities are counting. Reporting results to local, regional, and national policy and advocacy efforts will be ongoing. And yet, data are not the end result but a starting point. As I wrote recently elsewhere: “Consistently collected data keep systems honest. On this foundation, we build creative and solid advocacy.” Shamas asks: who is keeping count? And we can now answer: we are. And we’re ready to do it collaboratively.
Email this Page
Share this Page on Facebook
Share this Page on Twitter
Print
Print this Page

I'm intrigued by your statement "Regions and cities are counting." To whom are they reporting? Is there a central point for all this information? It would be interesting to see what areas are doing well in order to ask them how they are doing it. This fall, my Dramaturgy students did a count relating to playwrights produced in our community of Charleston, South Carolina. The results can be found on my webpage - http://www.susankattwinkel.... But how does this information get circulated? How can we connect with other areas doing better than us? My students had some suggestions for how to start dealing with the issue, but we're eager to continue the conversation. Perhaps howlround could set up a site for community reporting.