The (Re)Education of Laura

I really admire parents who don't let their children consume popular culture, those who encourage their children to read, write, and birdwatch instead. I am not, however, one of those parents. We do encourage our children to read and write, of course, but the only birdwatching we do concerns the pigeons who have taken unfortunate and permanent roost in our eaves. As far as their consumption of popular culture goes, the Professor and I have historically let the children follow their bliss. If it's reasonably age appropriate and within their allotted screen time, they can watch, listen, and game whatever they want.

Which is how Frozen Radio came into our lives.

Frozen Radio is a station on Pandora, an internet radio station that lets you choose your playlist by genre. Frozen Radio plays songs from, you guessed it, Frozen, as well other musical and pop songs the Pandora programmers think a fan of Frozen might enjoy, like, apparently, Taylor Swift, Katy Perry, and Miley Cyrus. I'd argue they have their demographic off by about seven years, but what do I know? In no time at all, Laura, at age four, became a connoisseur of preteen pop.

At first it was kind of cute. The four-year-old would sing, "I can make the bad boys good for a weekend," and we'd giggle a bit and get on with our lives. I admit, I was a little abashed when Laura announced that "Party in the USA" by Miley Cyrus was her favorite song, but I figured she'd get it out of her system soon enough. Quickly, however, Frozen Radio became an obsession. First thing in the morning, Laura would beg for Frozen Radio and then cry when I turned it off, finally sick of all of the auto-tune. For the usual reasons, I let this go on for too long, for when Laura was listening to Frozen Radio, she left me alone.

I immediately banned "Frozen" Radio from our house for the rest of time. I admit, it wasn’t really the lyrical content that awakened the censor within; no child of mine is going to be an Iggy Azalea fan.

Then one morning, I walked into the study and discovered Laura doodling on a piece of construction paper, singing, "Trash the hotel, let's get drunk at the mini bar," and I immediately banned Frozen Radio from our house for the rest of time. I admit, it wasn’t really the lyrical content that awakened the censor within; no child of mine is going to be an Iggy Azalea fan.

And that’s when I began the re-education of Laura, determined to wean her from the tit of preteen pop to the cup runneth over of musical theatre. We started with Annie, which in retrospect may not have been the best choice. Sure, “Tomorrow” is great and Carole Burnett can transform “Little Girls” into more than the sum of its parts, but the soundtrack is also full of middling stuff like “I think I’m Gonna Like it Here” and that dreadful number with FDR. Laura turned up her nose at Joseph and the Amazing Technicolor Dreamcoat, which I pushed on her, because it was playing at our local high school. I have a very simple piano songbook of Rodgers and Hammerstein tunes I’ve been playing since I was twelve, and I tried to woo her with “Surrey with a Fringe on Top” at the piano. The chicks and ducks scurried, and so did my kid.

In fact, Laura rejected every beloved musical of my childhood, including Oliver, Camelot, and The Wiz. There was a time when I “Eased on Down the Road” daily and thought “If Ever I would Leave You,” was the apex of romantic swoon. Laura would have nothing to do with it. She didn’t even like “Where is love?” from Oliver, which pretty much means my four-year-old self and four-year-old daughter will forever be locked in mortal combat.

On a whim, I rented the movie version of Into the Woods for the girls to watch. No, not the beloved Bernadette Peters stage version that we all adore, the big Disney version that cut “No More” and that we all tolerate, because Emily Blunt is very winsome, and Chris Pine is surprisingly cheeky and unsurprisingly fine. Laura enjoyed it. Not as much as she loved Frozen Radio, but she quite liked the moment during “Agony” when the Princes rip open their shirts (heaven help me) and when the camera descends into the wolf’s belly to save Grandma and Little Red. In fact, she liked it enough to let me play the Broadway soundtrack in the mornings, while she drew fields of daisies at the table, often enough to learn the words.

Then one night PBS aired the NY Philharmonic concert version of Sweeney Todd with Emma Thompson and Bryn Terfel. I let the girls stay up late to watch it with me. Lizzie, at age seven, lasted half an hour, but Laura sat there entranced until eleven o’clock. Now we sing “Nothing’s going to harm you” at night before bed and instead of daisies, we draw meat pies. 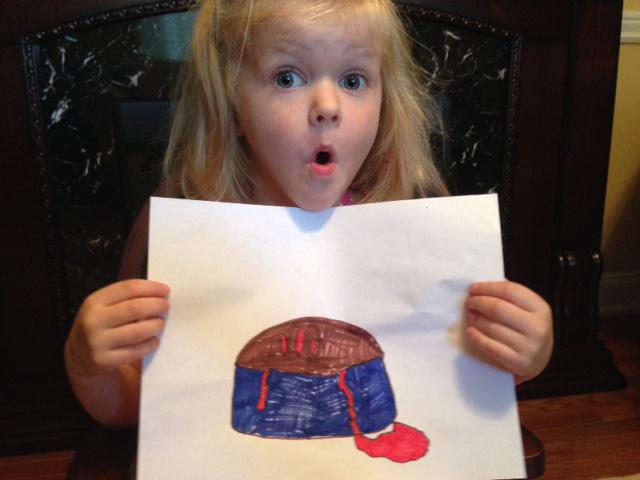 In your face, Iggy.

What musicals do your kids enjoy? Any suggestions?

Oh man. My daughter inherited my ability to hear all the lyrics (revealed when I picked her up from a pre-school rainy-day disco party and she asked me "Why DID someone leave the cake out in the rain?"). She sings her heart out to KTU in the grocery store: Taylor Swift, Megan Trainer, Katy Perry, Ariana Grande, and yes, Iggy Azalea. I let her listen. I blasted my parents with the Sex Pistols, after all. She told me once, "Take Taylor Swift's advice on clothes and how to write a pop-song, but don't ever listen to her about dating!" So it hasn't entirely rotted her brain.

"The chicks and ducks scurried, and so did my kid."

I really enjoyed this article, both because of the content and how well it is written. And, most of all, because it ended on a hopeful note! (And the lesson to not let little kids listen to most modern pop music, which I wish more parents would heed.)

The chicks and ducks scurried, and so did my kid.

I love everything about this! Who knew that Sweeney Todd would resonate so deeply with a 4-year-old?

oh man, 4 year olds LOVE gross stuff like baking people into pies. My 4 year old is on an Odyssey kick right now - I have a graphic novel version and he wants me to read the part with the cyclops. Every night for a week we read about a monster eating people for dinner. Fun!

Musical Theatre and Theatre With Music
U.S. by State
Kansas