I’ll admit that my expectations for Yekaterinburg were not high. A coworker in San Francisco, a Russian of intimidating intelligence and bone-dry humor, grew up in the city, and when I asked him whether he had any advice for me, he replied, “Sure: don’t go.” Our drive into the city from the airport did not fill me with anticipation, either—compared to St. Petersburg, Yekaterinburg looked grey, industrial, Soviet-drab. 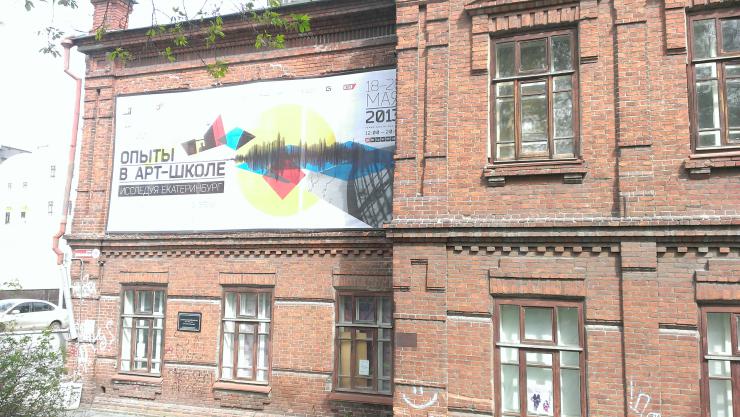 This fog of low expectations began to lift almost immediately. Natalya Druzhinina, our savvy host on this leg of our trip, walked us through the city, pointing out hints of restlessness and vitality: public sculpture, new construction, historic modernist architecture. We soon reached our destination, the National Center for Contemporary Arts, located in a ramshackle brick building that had formerly housed a school. The center impressed us with its experimentation, its process-oriented approach, and its interest in community engagement. The current exhibition resulted from a number of German artists from different disciplines working with local artists and non-artists to intensively investigate artistic practice. The resulting work on display—video, photography, sound art—was diverse and vibrant, humming with energy even when the experiments were less cogent.

I was particularly struck by the prevailing interest in Yekaterinburg as it is now, in contrast to St. Petersburg’s constant wrestling with its past. We saw this interest in a photo of a woman doing a handstand in a Yekaterinburg construction site, in a video of a site-specific contemporary dance performance in a factory (in which factory workers took part), and perhaps most vividly in the instillations of Vladimir Seleznev. In one, he constructed a detailed map of the city, constructed completely from trash he collected in its neighborhoods. In another, the interior of a large, brightly-lit cube is painted with images of landmarks around the city; the lights fade, and the walls come alive with glow-in-the-dark portraits of the figures who still haunt the city, from Boris Yeltsin (who rose to prominence as the city’s mayor in the ‘70s) to contemporary local poets and songwriters. 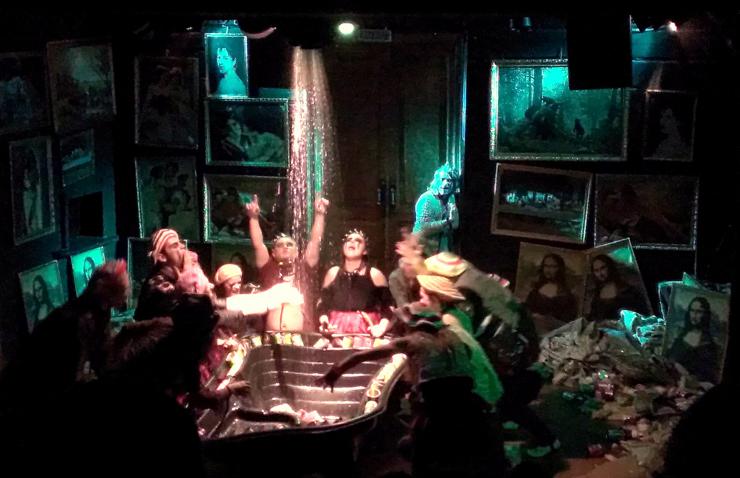 This spirit also flowed through a production of Hamlet, by Kolyada Theatre, directed by its eponymous artistic director Nikolay Kolyada. The company occupies a white wooden house that is crammed floor to ceiling with tchotchkes, photos, musical instruments, and memorabilia of past shows. The same cluttered, anarchic aesthetic spills into the theater space as well. As the performance lurches maniacally along, the small stage fills with tin cans, ratty stuffed animals, buckets of corks, and a dozen cheap reproductions of the Mona Lisa. The items are chosen for their garishness and for the noise they can generate. To those who like their theater clean and elegant, the effect can be off-putting: John Freedman, theater critic for the English-language Moscow Times, accompanied us to the performance and said that other critics in St. Petersburg and Moscow dismiss Kolyada as kitschy and lacking in taste. What they seem to miss is the vitality of his work.

Before the action of the play as written by Shakespeare even starts, the performers enact a series of ritualized evocations of the world they are creating. The performers enter, stomping rhythmically and dangling their tongues from their maniacally grinning mouths. They stand and regard the audience, faint smiles on their lips, before donning matching hexagonal knit caps and smearing their heavy eye makeup down their faces, forming eerie clownish tear-streaks. Thus transformed, they perform a stomping dance that simply but effectively charges the room with energy.

Soon, a brutish figure appears, a dog’s barbed choker collar crowning his head, and begins molesting one of the Mona Lisa reproductions. This is Claudius, the murderous usurping king. As played by Anton Makushin, Claudius is a terrifying bully, all id and pent-up violence. He leads the ensemble in bacchanalian revelries, ending up naked in a tub half-filled with water and sodden stuffed animals. He berates his entourage and punctuates his invectives by replenishing the pile of stuffed animals hiding his crotch with a wet slap. (Nudity onstage is, if not illegal, highly frowned upon in Russia; Kolyada, in masking Claudius’s nudity with wet children’s toys, manages to adhere to this rule yet create something lewder).

Meanwhile, Hamlet watches the action from upstage in an exaggerated pose of teenage disaffection. Oleg Yagodin’s young prince brings to mind the charismatic torment of Kurt Cobain. In his first soliloquy, he alternately speaks, then breaks into a hip little dance, then dismisses the audience with a wave of the hand, filled with abashed bravado. The production revolves around the poles of these two riveting performances. Kolyada’s direction—thoroughly contemporary and absolutely true to Shakespeare—better illustrates the central tensions of the play more palpably than any production I’ve seen. 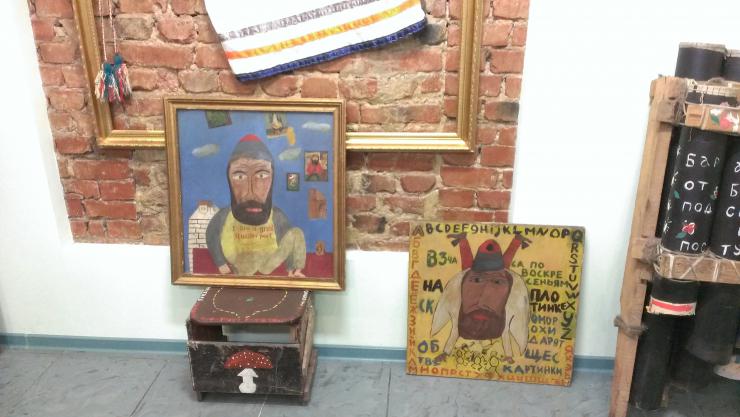 I thought of this production of Hamlet the next day when we visited the tiny B.U. Kashkin Museum of Underground Culture, housed in a former bomb shelter in the basement of the State University. B.U. Kashkin was the pseudonym of artist Evgeny Malakhin, who, for several decades, stirred up productive mischief in the art scene of Yekaterinburg. Trained as an engineer, Malakhin began making art that could be questionably labeled “outsider”, primarily because of the artist’s lack of formal training.  However, assuming the identity of “old man B.U. Kashkin” (bukashkin can mean either “little bug” or “second-hand”), Malakhin slyly thumbed his nose at such conventions while gathering a community of makers around him. He defined art as “any act of emotional communication,” and insisted on a radically anti-commercial approach to making art. The elements he used in making his work were recognizable to anyone—church iconography (leached of its religious content), the Russian language, childlike figures, folk songs. He provocatively used populist signifiers that predated the “populist” Soviet regime. His approach to making art was similarly inclusive; most of his work at the museum was in fact created by his casual assistants, who followed his instructions (or didn’t—either was fine) and illustrated his writings.

In B.U. Kashkin’s busy paintings on scraps of wood and lovingly hand-made book art, I saw a resonance with Kolyada’s Hamlet. Both artists reject accepted standards of taste and aesthetics, instead using trash and excess to conjure unlikely beauty, and both artists used recognizable contemporary tropes towards a goal of inclusivity. This vitality seems to me to weave through the culture of the city, from the municipally sanctioned street-art festival, Stenograffia, to the city’s embrace of contemporary dance (which gets short shrift in a nation obsessed with ballet).

Both artists reject accepted standards of taste and aesthetics, instead using trash and excess to conjure unlikely beauty, and both artists used recognizable contemporary tropes towards a goal of inclusivity. This vitality seems to me to weave through the culture of the city

At the B.U. Kashkin Museum, I asked the young curator, Daria Kostina, whether B.U. Kashkin inspired the city’s embrace of counter-culture, or whether he is simply part of a deeply ingrained disposition. She argued for the latter and mused briefly about the reason for this bent. She partly attributes it to Yekaterinburg’s relatively remote location in the Ural Mountains, and to the fact that until 1990 it was closed to foreigners because of its military plants and therefore had less outside influence. None of these explanations satisfy her, though. Whether it’s merely something in the water or the air, there’s little doubt that Yekaterinburg has a rich, humane culture that belies the grey sternness of its outward appearance.

I’d be remiss to not mention the production we saw of Kashtanka, at the Yekaterinburg Young Spectator Theatre, where our host, Natalya Druzhinina, serves as director of development. The adaptation of Anton Chekhov’s story for children about a lost dog and his adopted family of animal circus performers was staged simply yet effectively. The tale is funny, but deals with death, sadness, and complex emotional choices.  The production clearly appealed to the children present, yet it did not pander to them in the least; the majority of American theater for children could learn a thing or two. So unexpectedly powerful was the production that several of our group wiped away tears as they applauded.
____________________________________
All photos by Christopher White.