Our small cavalcade rolled into Omsk, in Western Siberia, on an impossibly blue and broad late-spring day. Who knew that Siberia could have such glorious weather? Our transport, the Trans-Siberian Railway, proved an apt metaphor for the city towards which it bore us: it felt small—cozy or claustrophobic depending on one’s mood—but it was an excellent means of seeing a wide swath of the country.

Our visit was organized around the Young Theaters of Russia Festival, organized by one of the city’s five municipally-sponsored theaters, the appropriately named Fifth Theater. Many in our group wondered about the name of the festival: does it refer to theater for young audiences, or to theater made by young people? In fact, the name refers to the ages of the participating theaters. Most of the companies performing in the festival have existed for fewer than thirty years.

The festival was curated by Pavel (Pasha) Shishin, who also served as our host while we were in town. A compact, energetic man, Pavel is not native to Omsk, but moved there several years ago to take the position of curator of the festival and Repertoire Director of the Fifth Theater. While he has clearly found a way to thrive in the place, his carefully diplomatic comments about the city suggested that the adjustment might have been a struggle.

Omsk, with a population of 1.5 million, is one of those strange cities that make Americans ask, “Why have I never heard of this place?” Its remoteness is at least part of the answer. Russians refer to the city as “provincial,” a term that in the US would have a condescending note. It is used condescendingly in Russia, too, but it also has a specific meaning that is hard for an American to grasp. America, with its variety of regional cultures that are as different from each other as Germany’s is from Italy’s, acknowledges and often celebrates its diffusion of cultural centers; to name one as the “cultural capital” and the others as the provinces would be to misunderstand the nature of America. However, Russia, despite its vast size, seems to consider itself more or less a monoculture whose centers are Moscow and St. Petersburg; “culture” flows outwards from those cities to the rest of the country. 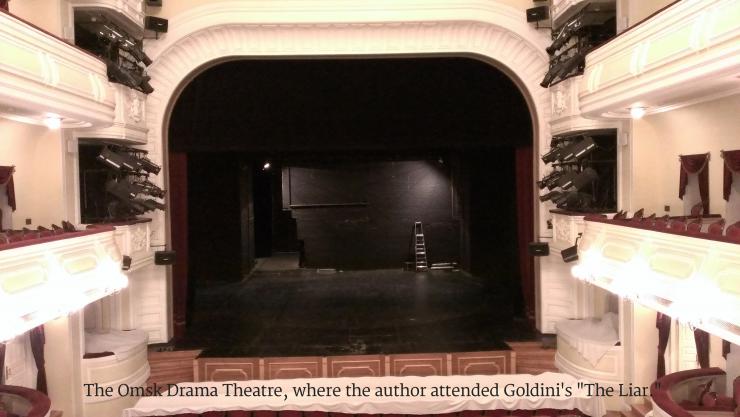 A “provincial” city like Omsk does not project artistic vanguard-ism. There is a large amount of theater activity, to be sure, with at least ten large theaters, including the Fifth Theatre, funded by either the federal or municipal government. Nonetheless, the voluminous activity does not seem to spawn a diverse range of work. If a production of Goldoni’s The Liar, which many of us attended off-festival at the Omsk Drama Theatre, is representative, the work generated at these theaters is sumptuously designed, skillfully acted, but perhaps lacking in fresh and challenging ideas.

Russia, despite its vast size, seems to consider itself more or less a monoculture whose centers are Moscow and St. Petersburg; “culture” flows outwards from those cities to the rest of the country.

When we asked Shishin whether the city has an artistic counterculture, he showed empty hands and shook his head as if to say, “Could such a thing exist here?” Was he, we wondered aloud, that counterculture? He modestly demurred, but the reactions of locals to the work he presented went far towards confirming our suspicions.

Unfortunately, observing such reactions served as our primary lens through which to try to understand the local culture. Unlike in the other cities we visited, we saw very little work from Omsk itself; festival programming, shows imported from elsewhere. But Shishin’s ambitious program, aimed to prod and challenge, provided much reaction fodder for his adopted city.

During the performance of the translation at the festival, in an imaginative staging that opted for angular monochrome to contrast the humidity of Williams’s melodrama, we saw clearly that the institution’s squeamishness reflected the city’s discomfort with homosexuality. At several moments of modestly staged carnality, murmurs rippled through the crowd and spines visibly stiffened. In one scene, the aging gay artist presses himself on a strapping, though drug-addled, fellow-resident in a New Orleans boarding house. The young man fights off the advances, hurling gay epithets while insisting that he would never have sex with a man—for less than one hundred dollars. The vocal response of many Russians in the audience was unintelligible to me, but the tone swirled mirth with repulsion. (As I write this, several days later, I have read news that, in another provincial Russian city, a man was brutally murdered for his homosexuality—the second such incident this month.)

Even more vehement was the reaction to Damned Be the Traitor of His Homeland, by the Slovenian company Slovensko Mladinsko Gledalisce. The piece, by far the most explicitly political that we have seen on our trip thus far, addresses the continuing aftermath of the violent disintegration of Yugoslavia and abrades many strong Russian theatrical taboos. At one point, the cast members face out and slowly undress, weeping as they become increasingly exposed. Their nudity incited a wave of consternation, with more to come. Direct political discussion onstage is rare here, but Damned progressed from discursive to accusatory: one segment (which is adapted for every country in which the troupe performs) features a performer angrily haranguing the audience in English, describing all the ways that country was complicit in the horrors experienced in their region. The segment is combative, even heavy-handedly so, yet after so many weeks of largely apolitical work, I saw it as bracingly brave.

At the first performance, at least half the audience walked out in a fury. For the second performance, the festival organizers invited a respected theater critic from St. Petersburg—an expert from a cultural capital—to preface the performance, contextualizing it in European traditions of political theater and beseeching the audience to listen to other points of view. The expert also invited anyone who would find nudity and strong language offensive to leave prior to curtain’s rise. Despite her preface, a handful of audience members noisily walked out mid-show.

For a few days in Omsk, I felt frustration at the insidiousness of the prevalent societal constraints, dismay at the continued repression of heterodox perspectives, and some smugness about my city’s inclusivity. Upon further reflection, however, I wondered at the potency of theater in Omsk, a city in which such outrage is still a possibility. I remembered hearing in college about the first production of Ubu Roi and marveling at a society for which theater held such relevance that a single show could provoke riots. Perhaps now I’ve seen something close. Many in Omsk may be poised to leap on any offense to their sensibilities, but they take theater’s ability to affect change seriously. I can’t imagine this reaction in San Francisco. Could it happen, though, if only theater artists were saying something seriously challenging? And would more people, especially those younger audiences that so many theaters covet, fill seats if those voices were raised?

Of course, taking those risks has consequences. Pavel Shishin fears for his job in the aftermath of such rancor. For his sake, and for Omsk’s, I hope he continues on there.

If half an audience walks out in a fury in mid-show, how I cheer the courage and spirit of the other half that stays. That's a lot of seeds of change. Thanks for your insightful reporting.