Beyond the Capitals, a project of the Center for International Theater Development, aims to create meaningful encounters between new generations of theater animators in Russia and the United States. Members of the theater communities of four American cities are currently traveling to four different Russian cities; participant Christopher W. White sends back his impressions. Find the full series here.

Our time in Moscow was so brief that we came to think of it as a coda to the trip, which became ever more apt as we found many of the themes of our trip echoed and crystallized in our interactions there. While these different themes wove themselves together, my mind began sifting through the various ideas and flashes of inspiration from the past weeks in an urge to mutate them to the service of my milieu of the San Francisco Bay Area and the particular needs of my ensemble, Mugwumpin. How, for example, could we adopt some of the exciting aspects of the Russian repertory model—the variety of work, the dialogue that different pieces can have with each other, the assortment of experiences available to the audience—without becoming weighted down under the Sisyphean logistics that require nearly every theater in Russia to employ one hundred or more people.

In Moscow, we discovered a similar impulse towards hybridization bubbling up in several corners. While the received systems and structures under which theaters operate in Russia are deeply entrenched, many theaters and directors are working to tweak, evolve, or upend those traditions. 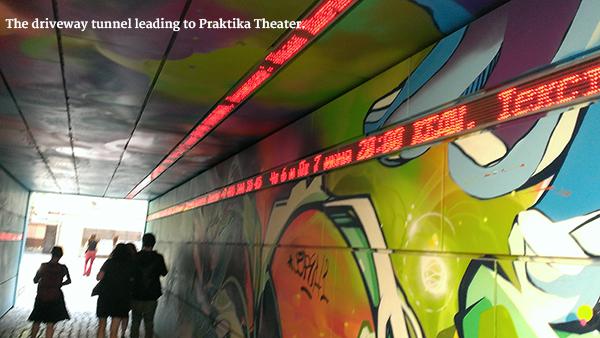 On a nondescript side street in Moscow, an eye-catching driveway tunnel invites in passersby with bright, graffiti-inspired murals and LED tickers embedded in the walls, streaming their messages inwards. At the other end of the tunnel is a cobbled courtyard typical of older Russian apartment buildings. But here a doorway thrusts diagonally out of one corner, its insistently contemporary design contrasting the ordered stone façade around it. Inside is Praktika, a very small, very successful theater that is challenging many of the accepted models of theater making in Moscow and beyond.

Praktika was founded in 2005 by Eduard Boyakov, an impresario whom many credit with making new Russian drama popular and fashionable. In this spirit, Praktika is dedicated to the practice of developing thoroughly contemporary work. To describe the atmosphere they try to engender, the smooth-pated new artistic director, Ivan Vyrypaev, repeatedly used the Russian word aktuel. His translator, a young American expat actor, stumbled on the word more than once, trying out “hip,” “of the moment,”and “current.”

To Vyrypaev, being aktuel means looking beyond the walls of his theater, both far afield at the practices of other countries and close to home at his city and its environs. He expressed the desire to develop a model that is closer to the American project-based mode (which Russians call the Broadway model), but that still maintains some elements of the repertory model. As a theater without an in-house acting ensemble, Praktika faces enormous challenges in scheduling its repertory calendar of rotating shows. The actors, some of whom are based in cities like London where theater operates on the project model, are constantly consumed by other commitments; getting all the actors together to perform a show in the repertoire has become increasingly difficult. Being able to offer a full weekend, week, or more of performances would ease this difficulty somewhat. 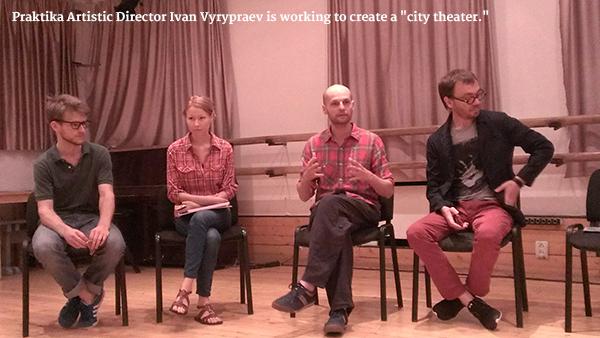 Even more pioneering is Vyrypaev’s nascent plans for what he calls a “city theater.” He envisions creating a series of satellite Praktika theaters in the further-flung reaches of Moscow. These branches would not only bring theater to people where they live; they would also present work responsive to the stories and themes that resonate with that particular neighborhood. In these and other endeavors, Praktika seeks to weave together the work they make and the day-to-day life of the city—a striking contrast to the art-fortress mentality of many major theaters we visited.

The general reticence of theaters to tackle controversial issues correlates to the primary source of funding in Russia, which is governmental.

It would be difficult for Praktika to be aktuel without addressing current political issues, and they are indeed committed to such engagement—another point that distinguishes them from many Russian theaters. The general reticence of theaters to tackle controversial issues correlates to the primary source of funding in Russia, which is governmental. Again, Praktika looks to other models abroad to circumvent these concerns: they are assembling a board of directors of wealthy oligarchs to support the theater financially, buttressing it against the whims of government largesse. While Russia has a less-developed tradition of philanthropy than many Western countries, Vyrypaev asserts that he has identified patrons who are sincerely committed to moving culture forward. He acknowledges that some of them may join the board to rub elbows with the well-known actors they work with (Vyrypaev is himself is a respected film director as well), but he is not precious about the purity of their intentions. (And certainly private funding is no failsafe against self-censorship; we only need look at the undue influence of David Koch on American public television.) 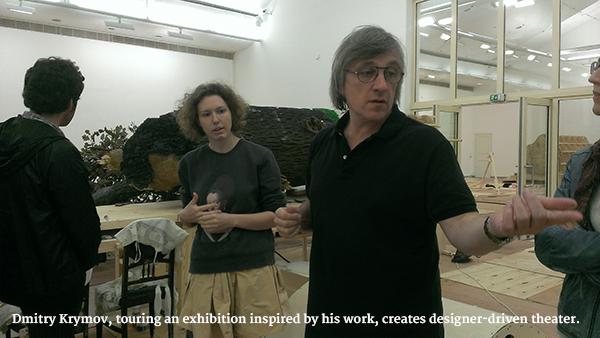 Praktika is just one example of alternative models we found in Moscow. Around the corner from Praktika is the fiercely independent Teatr.doc, operated by the charming Maxim Kurochkin. Teatr.doc is committed to presenting unflinchingly political and socially engaged work. Dmitry Volkostrelov’s POST Theatre (which splits its time between Moscow and St. Petersburg) is pushing hard against the traditional form of theater; in one piece shown in an apartment, most of the action occurs unseen in other rooms, and another consists primarily of a slideshow of seemingly unrelated photos. And then there’s Dmitry Krymov, whose eponymous lab creates work driven by the poetic visual aesthetic of his team of young designers (most of whom began collaborating with Krymov as his students at the Russian Academy of Theatre Arts). In one of our last encounters in Russia, Krymov gave us a tour of an exhibit dedicated to the Krymov Lab’s work on the eve of its opening. Rather than simply presenting photos and models from their various productions, Krymov and his team created a series of installation pieces that are meant to evoke the atmosphere and memory of each performance—a fascinating effort to bridge visual art and theater.

The innovative spirit at play in Russia thrives in spite of, or perhaps in response to, the rootedness of Russia’s theatrical traditions. Those roots are held in place at least partially by the conservatism that the publicly funded system promotes. And yet they have a robust system of public funding. I confess that our little group of Americans felt a great deal of envy over the resources available in Russia. It’s a system in which large numbers of artists, technicians, and administrators make a living wage, though frequently modest, making theater. Performers are expected to focus their energy on improving their craft, rather than on careerist hustling. And most importantly, the investment of the government in theater reflects the public’s interest in it. Certainly it’s a chicken-and-egg issue: is the public engaged with theater because the government prioritizes it, or does the government fund (and influence) theater because the public values it? Possibly the relationship is mutually sustaining. Regardless, my experience in Russia has bolstered my conviction that American governmental institutions, from the local to the national, should value and invest in culture, and that artists, while graciously accepting that investment, should resist the silencing influence with which any outside investment can infect the art. Vyrypaev, Kurochkin, Krymov, and others are blazing the trail in Moscow towards a vibrant, daring theater in dynamic relationship with the structures necessary to sustain it.