In 1990, I auditioned for an acting program in New York and the very thoughtful and pragmatic teacher informed me that I would never be cast as a lead on the American stage. I would only be considered for domestic help parts or minor support roles. His reasons were my “ethnic” looks and my accent. The accent I could be coached out of but there was little I could do about my looks. His message, as I heard it was to basically give up on a career in professional theatre in the US; his “American stage” had no room for someone like me. After crying for a few days I decided to create “a room of my own” on the American stage. Instead of giving in to his limited definitions, I embarked on creating an artistic home where my looks and accent would actually be assets—and that’s how Golden Thread Productions began.

To me, theatre is that golden thread that helps me find my way out of the labyrinth of life.

At graduate school, my work was deeply informed by the experience of being an outsider. I carried within me the history and political perspectives of the Middle East. For my master’s thesis, I chose to adapt Lysistrata to the Israeli-Palestinian conflict. It was important to me that my graduate project be staged outside of the university as a “professional production.” So I came up with a name for a theatre company and made the Middle East our focus. Golden Thread Productions is inspired by the myth of Ariadne and the Labyrinth (I was reading a lot about the Greeks!). To me, theatre is that golden thread that helps me find my way out of the labyrinth of life.

In the early years, we sporadically staged a play or two per year. We were not sure if we actually wanted to continue with the company. My graduate advisor had warned me that an ethnically defined mission would box me in forever. But most of my writing had to do with the experience of being an Iranian woman in the US, being an immigrant, being of mixed blood. I didn’t want to write or produce anything else. By 1999, we were pretty much operating as a small theatre company, with a volunteer staff, Equity waiver and fiscally-sponsored by a larger organization. That was the year we produced our first festival of short plays, what has now become the ReOrient Theatre Festival and Forum Exploring the Middle East. The impetus for the festival was to make the diversity of the Middle East more visible to American audiences, and to also create a dialogue among the various plays and the perspectives they represent. So much of the misunderstanding about the Middle East seems to stem from the very narrow view Americans have of the region and its people; that they are all Arabs, for example, or all Muslim. At the same time, Middle Easterners are frequently surprised by the characters and the content of our plays. “An Iranian woman would never behave in such ways,” they would proclaim. It seemed like Middle Easterners too have a narrow view of the Middle East. Their conviction reminded me of that teacher I had met years ago at acting school auditions in New York.

In that first year, we staged plays from Algeria to Iran and Palestine. We produced a play by Bay Area filmmaker Caveh Zahedi, known for his quirky first-person docudramas. We also hosted Emily Shehadeh performing her one-woman show, Grapes and Figs are in Season, about her experience of growing up a Quaker Palestinian! The production was a family operation: my sister and her husband helped build and paint the set; friends ran sound and lights and stage managed; colleagues from my day job volunteered as ushers and box office staff. We did receive a couple of grants (thank you, California Arts Council!) but most of our expenses were paid out of pocket. I held a full time job that paid a good salary and effectively funded Golden Thread Productions.

In 1996, the year we founded Golden Thread, the Middle East was pretty irrelevant to the average American. Some worried about the Israeli-Palestinian conflict but it was a distant battle being fought by other people. Five years later, the events of September 2001 would change this. The war had now been brought to our backyard and we felt compelled to fight back. And fight back we did, in a massive way. Hundreds of thousands of American soldiers poured into the Middle East. Iraq and Afghanistan were “liberated” and Al Qaida became the catch-all evil-doer. Iran was identified as a bigger monster than Nazi Germany and seemed destined for immediate liberation. At home, Americans of Middle Eastern background turned into enemies overnight, rounded up and questioned, and many “rendered” indefinitely.

9/11 brought national visibility to Golden Thread. I received calls from The New York Times that had never shown any interest in our work before, asking me to comment on the attacks. Even in that conversation, there was little interest in dissecting the issues. The reporter basically wanted me to confirm the opinion she had already formed and seemed very disappointed when I didn’t. The ReOrient Festival was slated to open in October 2001. Many other Middle Eastern cultural events chose to cancel. We held a meeting of artists and Board of Trustees (we had incorporated by then) and the majority elected to move forward. Two actors stepped down; one because he feared harassment; the other because she had lost someone in the towers. And so we rallied the theatre community of the Bay Area and they came in strong to support the festival. It was one of our best years. Ironically, the poster image for the festival that year was a dagger stabbing a rose. Looking back, that image symbolizes our loss of innocence that year, as a nation and as a theatre company. 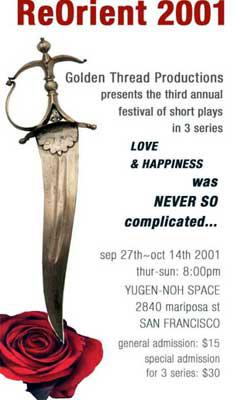 Our work became more deliberate after that; a war was being waged on us inside and outside of the US. We made theatre from and about the Middle East in the middle of the actual theatre of war in the Middle East being broadcast incessantly. Some things had not changed; our mission was still to present alternative perspectives of the Middle East. But those perspectives had now become more intransigent. The negative media campaign was being waged like an all out war against Muslims and everything that had to do with Islam and the Middle East. Having an artistic home became even more important under those circumstances. Artists who disagreed with the dominant torrent sought refuge at Golden Thread. Audiences looking for a different take on the situation flocked our theatres. In the process, we learned a few things about ourselves mainly that we know less than we think we do, and that it’s important to continue to care.

In 2001, I left my full time well-paying job and entered the ranks of struggling artists and joined those artistic directors who spend 90 percent of their time writing grants. We lived through the high tech bust in San Francisco and the depression (both economic and psychological) brought on by eight years of greed and war mongering. My deep conviction that the arts are the only way to significantly impact society kept me going. The breathtaking work of writers like Naomi Wallace, Yussef El Guindi and Betty Shamieh filled our veins with the life force that is theatre. They helped us see differently, to ask questions that were not being asked, to feel deep inside those feelings the narrative-shapers of the time did not want us to feel. Over the years, many more artists joined the company. I look around me today and feel inspired by the youthful energy and unbound creativity that I’m surrounded by. A new generation of Golden Thread artists has emerged. I may have built a foundation but they are the ones putting on the roof, which is sky-high by the way. Walls? We don’t believe in them so much.

The topics we deal with have not really changed: identity politics, displacement, and war. It may not sound like it from this ominous list but we actually do a lot of comedies too! Yussef El Guindi’s Jihad Jones and the Kalashnikov Babes is probably the best example. We continue to draw from the literature of the Middle East as well. In this year’s ReOrient Festival we are staging a classic comedy by Tawfiq Al-Hakim, the founder of modern Egyptian drama. During the two-day ReOrient Forum, we will feature Rumi X 7=Tales from the Masnavi, a dynamic and colorful adaptation of stories from Rumi’s poetry directed by Hafiz Karmali designed to both entertain and inspire. The Forum is a new addition to ReOrient. It is a two-day gathering of artists, scholars and activists to discuss topics around theatre and the Middle East. As our family of artists and colleagues engaged with intercultural exchange has grown, so has the need for dedicated space for focused exploration, for sharing resources, and building a network of support. Similarly, as we develop more partnerships, The Middle East America New Plays Initiative (MEA), for example, with Lark Play Development Center and Silk Road Rising, we are creating a new movement that requires monitoring and support. When the MEA playwrights meet in San Francisco prior to ReOrient, they will be taking the pulse of this new movement. They will strategize, set goals and prioritize the tasks ahead. The Middle East is no longer some distant land where other people deal with foreign issues. The Middle East is now here, not as a threat but as an asset. A new way of looking at who we are and how our stories help us become better human beings.

I was fortunate to see the first preview of ReOrient 2012 in San Francisco last night. What a beautiful and varied collection of plays, some deeply moving, others very funny, all provocative and entertaining.

Thank you Torange for first having the vision and then endurance to keep the vision going. We have been blessed and are thankful for our work and dedication.