Thursday 13 May 2021
Essay by
Phil
Soltanoff 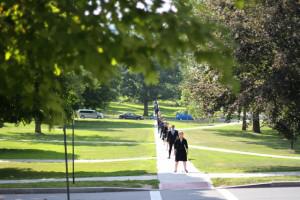 SITSTANDWALKLIEDOWN is a process of painting and drawing on space with choreographic gestures. It happens in public space so the performance is designed to collide with daily life. In this way, the event becomes a kind of tour guide—a lo-fi, non-commercial version of those red double-decker buses cruising Manhattan. This piece germinated several years ago in Kansas City, MO. I decided to deliberately break the rules at an expansive mall parking lot. I walked in a straight line from a corner of the lot to the mall shops, bypassing allotted pedestrian walkways. This innocent transgression caused a mild ruckus—drivers honked at me, security personnel flagged me down. It made me realize how much public space is claimed by commercial or legal interests and deemed off-limits. Consequently, that space is not really seen or experienced. It’s assigned a label—like “parking lot”—and then abandoned, site unseen, to its designated purpose. I want to reclaim this space, remove it from the perceptual junk pile, and play with its potential as a part of the experience of the world.

SITSTANDWALKLIEDOWN is also a community action. A large group of people work together to create an event to awaken an audience’s relationship to space. The gestures are deliberately simple— they sit, stand, walk, and lie down. Doing individual gestures like this is easy. Doing them as a group, in unison or cannon, takes work. It takes rigor and commitment, which brings the human element to the performance.

I love the potential of what’s called minimalist art. Placing a minimalist constraint in an unfamiliar location brings the unexpected to the surface. Seeing someone lie down on a lawn is very familiar. But a massive group of people all dressed in business suits, lying on a sidewalk that stretches for a quarter mile is unexpected. And if those people can move in an organized way—then the space really comes alive. That’s what I’m after. I also use objects to the same effect. I like those five-gallon blue water cooler bottles—they’re cheap, easy to find, plentiful, everyone knows them, and they’re identical. They also make a great sound. When they’re placed and moved in particular arrangements they can ignite what surrounds them.

SITSTANDWALKLIEDOWN is a kind of movable feast. The concept of the piece remains the same, but its location and the people who perform it change. The questions become—what qualities does a particular space possess that make it unique? What are the space’s dominant themes (architecturally), and how does it shape how people use it and look at it?

I first saw Willy Dorn’s work in Austin, Texas, and it inspired me a great deal. I liked his use of tableaux and its implicit critique of economic interests. I considered ways to advance his conversation with space. Rather than building still tableaux that the audience moved to, I built kinetic phrases that responded to the space. I’ve staged SITSTANDWALKLIEDOWN three times. Each time I’ve worked with a large and different group of people for a minimum of four weeks, responding to the particular qualities of the space.

SITSTANDWALKLIEDOWN is a kind of movable feast. The concept of the piece remains the same, but its location and the people who perform it change. The questions become—what qualities does a particular space possess that make it unique? What are the space’s dominant themes (architecturally), and how does it shape how people use it and look at it?

Each location reveals its qualities through us working in it. Take, for instance, a path. I discovered that a path didn’t mean much until attention was called to being off the path. The moment of arrival on the path became significant. I discovered this on Governors Island and used my learning at Williamstown. Each incarnation of SITSTANDWALKLIEDOWN expands its vocabulary. In fact, what makes the choreography most interesting is not the moves themselves, but what the moves point at. The ritual of performing the piece mixes with the rituals of everyday life—lots of carefully placed blue water bottles next to a woman pushing a baby carriage, a Hasidic man trying to fly a kite, or a couple driving a car—become the featured performers of SITSTANDWALKLIEDOWN. Spaces also provoke interest in adjacent spaces. While I was working at Williamstown, I discovered a bridge over a creek. In the piece’s next incarnation, I want the audience to stand on the bridge looking down at the water and have performers float out from under the bridge.

Making SITSTANDWALKLIEDOWN is about art. The political purpose is implicit. It’s meant to awaken the participant’s experience of the space they’re already in. It’s challenging. Our perspectives need to be cleared of clutter and memory so we can see what’s in front of us. Doing this is much more difficult than it sounds and has occupied my interest for many years.