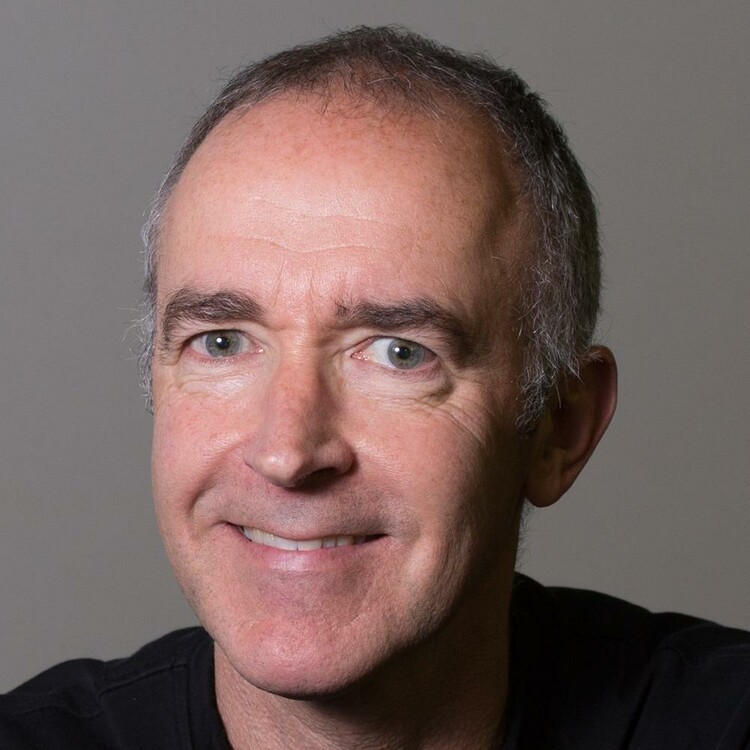 Earlier this year, Chicago company Theatre Y mounted its third production of the one-woman play Juliet by Hungarian-Romanian playwright András Visky. While all three stagings have featured Melissa Lorraine in the title role of a mother interned in a prison camp with her seven children, the productions’ approaches have varied considerably. Drawing on Visky’s concept of “barrack dramaturgy”—which “was born out of the need to make imprisonment a common experience”—the most recent Juliet provided a striking audience experience by configuring and filling the small black-box space in an unusual way, including by having three babies on stage.

Theatre Y was founded in 2006, and Juliet (translated into English by David Robert Evans) was the first play the company produced. Lorraine—co-founder and now artistic director—reprised the title role in a new production in 2010, and both productions toured internationally to places including Romania, Italy, Serbia, and Palestine, as well as across the United States. For the new production in 2020, Theatre Y sought an approach that would align with the company’s current mission to “create radically hospitable spaces for communion through critical and intimate participation.” 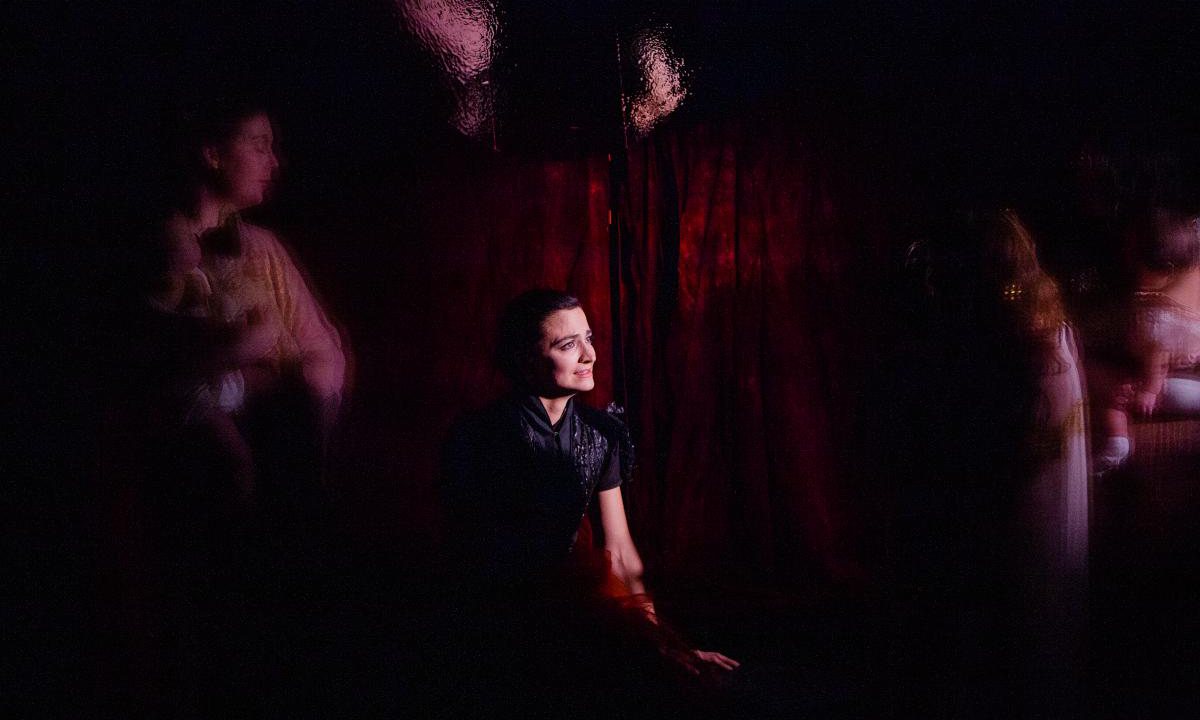 Juliet is based on the unimaginably harsh experience Visky’s mother Júlia went through in communist Romania. In 1958, Júlia’s husband Ferenc, a pastor in the Hungarian Reformed Church whose practice of Christianity was deemed unacceptable by the regime, was arrested and sentenced to twenty-two years in prison. Júlia continued his work until she was deported with her seven children to the inhospitable plains of southern Romania—an area called the Bărăgan, where the communist government sent thousands of political prisoners into forced domicile, a brutal form of imprisonment through extreme deprivation. Júlia kept herself and her children alive until an amnesty in 1964 enabled them to be reunited with Ferenc. Visky himself was the youngest, only one year old when Júlia and her children were deported.

Visky wrote Júlia in Hungarian and it premiered in Budapest in 2002. Intended for a single female performer and subtitled A Dialogue about Love, the script consists primarily of Juliet talking about death as well as love, mostly with God though also with her husband. As Visky writes in a note, “The description of this work as a ‘dialogue’ is meant to be taken literally.... The addressed or addressing other has to be there.” To God, Juliet directs questions such as “Why did you give me so many children?” and, longing for her husband, she puts it to God that “You must have invented love, too / Human beings would never think up / anything as crazy as love.” The play also tells a story through Juliet’s speeches: having collapsed while the prisoners were made to assemble standing outdoors, she is taken to the morgue, but her children steal and revive her.

Some details of their experience are conveyed by Visky’s text: for instance, their barrack had walls but no roof or furniture, and they had to subsist on a diet of little more than alfalfa and water. But the substance of the play lies in Juliet’s questioning and berating of God, into which she incorporates sections of Romeo and Juliet, juxtaposing that play’s treatment of love and death with her own predicament. The other main recurring point of reference is the Book of Job: like the Biblical figure, Juliet longs to understand the meaning of her suffering, even as she insists to God “I’m not Job, you understand?”

The most recent Juliet provided a striking audience experience by configuring and filling the small black-box space in an unusual way, including by having three babies on stage.

Chris Markle—Theatre Y’s co-founding artistic director, who died in 2008—directed the company’s first production of Juliet. Responding to input from Visky himself, Markle and Lorraine strove to avoid making the piece too tragic; as Lorraine says, “I quickly learned that lifesaving humor develops quickly under extreme oppression.” This staging placed Juliet, costumed in a simple brown dress, in a cube of diaphanous white cotton. The balance between hard and soft seems to have resonated with many who saw this production; in touring all over the world, Lorraine discovered that “it somehow meant something to a lost boy of Sudan, a Zambian presidential candidate, a Palestinian farmer who spoke no English and had never before seen a play.”

For the second production, director Karin Coonrod located Juliet in a much darker space featuring a circular steel platform, with her absent husband’s coat suspended from the ceiling. That staging also incorporated much more movement, with Lorraine using her body to create arresting images. She describes it now as “a physical battle,” “a very solitary whole body prayer.” Where Markle’s production had aimed to bring out the humor, Coonrod’s accentuated the darkness. Recalling how she experienced this Juliet, Lorraine says: “The challenge was to grab God by the shirt collar and find a sharper tool than self-pity.”

A New Approach for the 2020 Production

For the newest production, ten years later, director Kevin V. Smith chose to make Juliet less isolated and to bring the spectators into the performance. He says he “wanted the audience to feel immersed inside of the space, as if they’re inside a womb.” When the audience entered the black-box theatre, they found two levels of benches around an oval-shaped playing space painted red, and on a velvet floor in the middle were three young women wearing white, each holding a baby in diapers. Rather than appearing disconcerted by the newcomers, the infants took an interest in them, and when the babies did get restless, their mothers soothed them.

The chorus exited when the play started, leaving the space to Lorraine, but soon they returned, and for most of the show the women and their babies sat together on chairs on raised platforms behind the audience. Sometimes they responded, quietly, to particular lines in Juliet’s monologue. What they said was mostly indiscernible to the spectators (in fact, one of the mothers spoke in Romanian), but their expression of empathy with Juliet was clear, and the production’s juxtaposition of healthy, glowing motherhood with the play’s account of a mother struggling just to keep her children alive was moving.

Including babies in a theatre production brings with it the danger that the infants will distract the audience from the rest of the show, and adorable cherubs could easily blunt a performance’s cutting edge. Smith’s Juliet wisely chose to have the audience spend several minutes watching only the babies and their mothers before Lorraine began to speak Visky’s text; this reduced the infants’ capacity to pull focus from Juliet, since we had already gotten to know their faces and behavior.

While Smith’s addition of the mothers and infants served effectively to counterpoint the story told by Juliet, he also made this choice as a feminist gesture. He’s been struck by how isolated mothers of young children can feel: they are often not welcome in public spaces, particularly when their babies cry, and they become excluded especially from intellectual and artistic discourse. Many people told Smith he was crazy to pursue his idea, yet he was determined to create an inclusive rehearsal and performance process. He succeeded: the four babies (including twins who took turns to go on stage) did become part of the team—Smith says they “created their own blocking”—and he’s confident he “opened people’s minds in terms of what’s possible on stage.”

The production’s juxtaposition of healthy, glowing motherhood with the play’s account of a mother struggling just to keep her children alive was moving.

Another interesting design choice of this newest production of Juliet was that it featured Spanish supertitles projected onto a small screen above the back wall, where Lorraine is positioned at the top of the show and where the final scene involving her and the chorus takes place. That choice was made in recognition of the large proportion of Chicago’s population for whom Spanish is a first language (around 15 percent); few, if any, English-language theatres in Chicago provide supertitles in Spanish, but Theatre Y now plans to do so as a matter of course.

Smith also added another layer to the role of language comprehension in this production by ending the show with a song in Spanish—a setting by Michael Nyman of a poem by the sixteenth-century mystic St. John of the Cross. Smith discovered that the song “Le di a la caza alcance” happened to echo the journey of Juliet in the play; “San Juan de la Cruz wrote it for us already,” he says. But he also wanted to turn the tables on the many audience members who speak English and had no need of the Spanish supertitles. Now they were the ones who needed to read the supertitles, in order to understand the song. 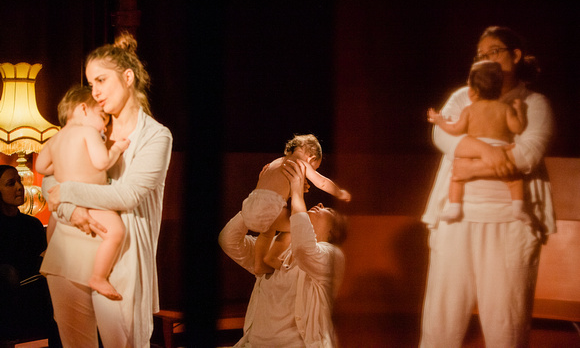 Supertitles in Spanish aim to make Theatre Y’s work accessible to as many people as possible, as does the company’s embrace of the “free theatre movement”; for Juliet and the four preceding productions, Theatre Y has not charged admission. Instead, the company encourages those who attend to become members who make monthly donations (they currently have around two hundred members). Forming a community with its audience is a key goal for Theatre Y, and one it pursues in various different ways. For instance, their most recent production prior to the reimagined Juliet was The Camino Project: a traveling outdoor performance that led attendees on a five-mile walk lasting six hours and ending in a celebratory, communal meal.

Throughout the fifteen years Theatre Y has striven to create community-focused theatre, Visky has played a significant role. The company has staged several of his plays, often with his direct involvement, and he also serves as a key source of inspiration. The connections between his ideas and Theatre Y’s approach were particularly clear with the 2020 staging of Juliet. Visky has written that his notion of barrack dramaturgy “sets the highest value on the community and the togetherness of people gathered in a theatre space.” The womb-like configuration of the space for this production was in keeping with his principles: it served “the intimate proximity of the audience and the actors, offering them the possibility of forming a single group.”

Theatres quite often remount well-received earlier productions, but usually they retain much of the original staging. It’s less common for a company to twice revisit a script they already successfully produced. Smith’s production of Visky’s Juliet adopted a very different approach from the starker earlier ones, in effect providing the lone central character with the collective company of both a chorus of mothers and infants and an audience clustered closely around Juliet. That approach generated an unusual and meaningful form of community: the pleasure the spectators could not resist taking in the spectacle of the babies mingled with the empathy they felt for the ordeal suffered by Visky’s mother. And by offering free admission and Spanish supertitles, Theatre Y endeavored to make that experience—the kind of experience only possible in live theatre, as we’re all aware of more than ever in April 2020—available to all Chicagoans.