I am a secret devotee of science fiction. I have never been a full-fledged aficionado, but certain books and movies within the genre have always attracted me. A friend and I were obsessed with the first Matrix movie in high school, leading to a blundering investigation of the Watchowski siblings’ inspirations for the film. Simulacra and Simulation by Jean Baudrillard was over my head, but I found myself entranced by William Gibson’s seminal book Neuromancer, in which he coined the term “cyberspace” and essentially prophesied the world wide web. I was similarly taken with Shane Carruth’s 2004 mumblecore mind bender Primer, which documents two Texas office workers, who through a techy side business, stumble upon time travel. Primer gives zero ground to sensationalism, CGI, or any other hallmarks of modern day blockbuster sci-fi. 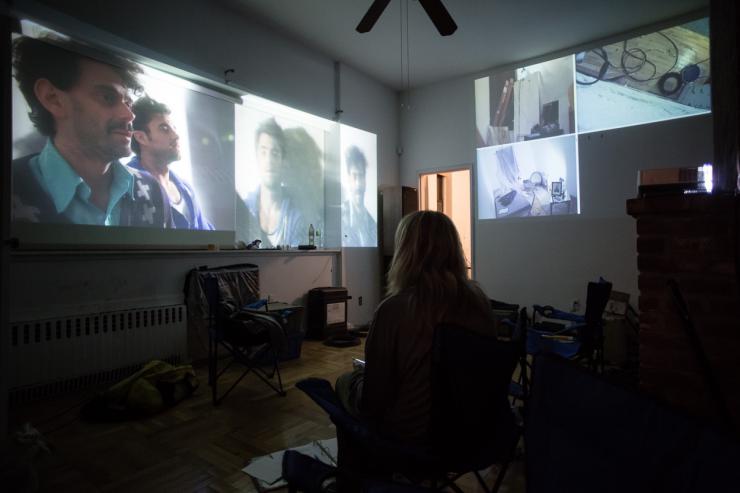 In keeping with my half hearted science fiction hobby, I never saw Andrei Tarkovsky’s celebrated 1972 film Solaris, based on the 1961 novel by Stanislaw Lem. I did, however, catch the 2002 remake, starring George Clooney and directed by Steven Soderbergh, which took its place on my personal roster of compelling science fiction. The newer version sticks close to the original plot and stays true to the original’s investigations of the nature of love, human bewilderment when faced with the Other, and the pliability of reality. Like Neuromancer and Primer, Solaris focuses on philosophical ideas and human stories; any otherworldliness of the surrounding environment or circumstances is always at the service of those ideas and stories.

S. is an attempt to recreate Solaris live—a potentially dangerous undertaking. The site of the show is a converted apartment… Projected images from live feed cameras cover two full walls, documenting real-time action in the closed rooms around us.

Romanian-born director Doris Mirescu founded the theatre company Dangerous Ground in 2001, and their new show, S., is a retelling of the 1972 Solaris. Solaris is only the latest film to get the company’s treatment; others have included Rainer Werner Fassbinder’s The Third Generation (1979), John Cassavette’s Husbands (1970), Andrzej Zulawski’s That Most Important Thing: Love (1975) and Jean Eustache’s The Mother and the Whore (1973). Dangerous Ground, according to the website, “creates multimedia theatre. With each production it seeks to discover the nomadic region where bodies, images, sounds, and words collide, and where the theatrical space is the limit of utmost danger.”

S. is an attempt to recreate Solaris live—a potentially dangerous undertaking. The site of the show is a converted apartment; at least there is no further information online that indicates that it is a dedicated theatre space. Upon exiting a narrow staircase, I was directed to take a folding chair and seat myself with the audience, jumbled up in a small room. Projected images from live feed cameras cover two full walls, documenting real-time action in the closed rooms around us. 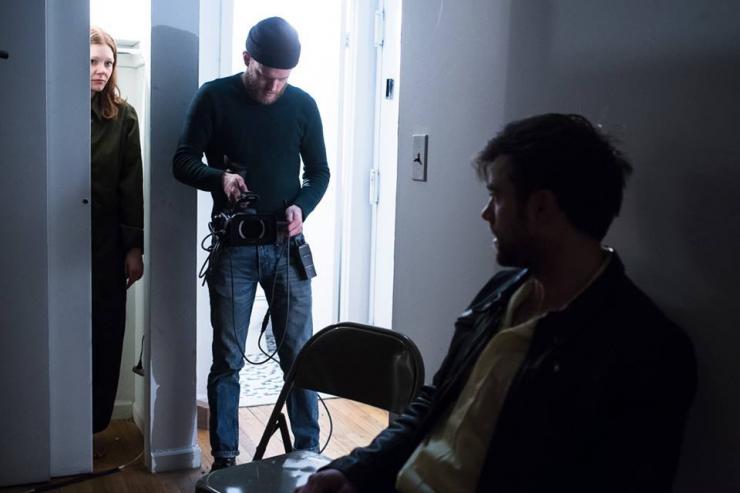 The story of S. begins on Earth. On the largest wall of our “theatre,” psychologist Kris Kelvin (Patrick Ball) prepares to blast off to the mysterious ocean planet Solaris. The two-camera scene involves multiple characters, as well as a movie-within-a-movie that is watched by the actors (and audience). The dizzying effect of having multiple moving images projected side by side was tempered by moments of specific framing by one or both cameras on an object or the characters’ faces.

In the program, Mirescu writes, ‘the use of technology allows space and time to become malleable.’ S. has a dreamlike, otherworldly quality from the get-go, which drew me in…

The specificity of actor/camera operator choreography was compelling when its intentionality came through so clearly, and while the rest of the piece must also have been tightly planned, some of the precision seemed to break down as the mission itself met catastrophe. However, there was so much to see at any given moment—the second wall of the space was used to show four static camera images of the space station orbiting Solaris—it’s possible that attempts at directing my attention were just missed.

With two moving camera operators in close quarters, shooting the same scene from different angles, it makes sense for one or another of them to be seen onscreen at times; it even, to me, fits perfectly into the larger ideas grounding the piece: How do we see ourselves? How do we see the ones we love? When the camera operators were visible in S. they were in street clothes, which made me wonder if they were meant to just blend in, or even if they weren’t supposed to be visible at all. My favorite moviemaking moment in the piece was when Javier Antonio Gonzalez, who played the character of Berton in the first earthbound scene of the show, reappeared toward the end, still in his costume, holding a boom microphone. The cameo was jarring in a good way, and provided a much-needed moment of levity. 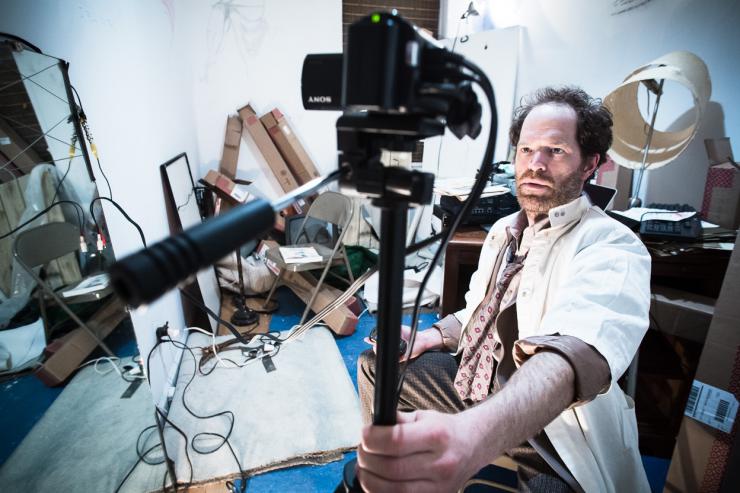 In the program, Mirescu writes, “the use of technology allows space and time to become malleable.” S. has a dreamlike, otherworldly quality from the get-go, which drew me in, though ultimately I was so ensconced in the piece’s general unearthliness that it was hard to track Kelvin’s transition from logical problem solver to victim of Solaris’s trickery. Shortly after his arrival on the space station, Kelvin begins to realize things have gone off the rails—he encounters the jumpy Snaut (David Skeist), the evasive Sartorius (Michael Barringer), and learns that their third colleague and Kelvin’s personal friend, Gibarian (Jon Froehlich), has committed suicide. Soon, Kelvin comes face-to-face with the problem: the planet Solaris has invaded the memories of the crew and manifested “guests,” flesh and blood apparitions of loved ones. Throughout S., Kelvin struggles with his feelings for Hari (Catherine Brookman), his dead ex-wife who has materialized onboard. She is of course not really the woman he knew, merely an amalgamation of his memories, and yet ultimately Kelvin—though he knows better—sacrifices everything for that happy illusion. 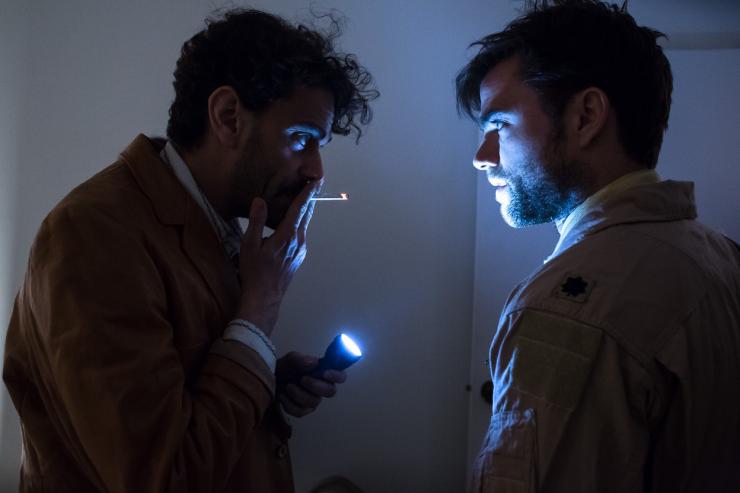 Mirescu, with Rose Seccareccia and Roxie Kratt, also handled the set, costumes, and art direction of S. The majority of the piece takes place in rooms that are appropriately cluttered, as if no one’s bothered to tidy up the space station for a while.

Speaking to the New York Times in 2010 about Dangerous Ground’s production entitled John Cassavettes’ Husbands, which was featured in the Under the Radar Festival that year, Mirescu stated, “What I’m trying to do is reveal the film process so that what’s usually hidden from us—the editing, the cables, the mess—is incorporated in the staging.” If S. is anything to go by, Mirescu is still investigating that same idea—and it’s an exciting one—though in such a melee of “bodies, images, sounds, and words” it can be difficult to parse what is intentional. Unlike Andrei Tarkovsky, who was exacting about what he would allow his audience to see, Mirescu throws us into an artistic deep end. It’s exhausting, but you can’t help but dive in to see what’s below.

***
All photos by Mario Zanaria.

Thanks for the great article! One of the things that struck me while reading this is that Orange Theatre in Phoenix created a performance too on Solaris, with a similar aesthetic. They presented at this year's Stage the Future conference. I think it's very intriguing that there's such a reaction to a source material that manifests similarly (though with apparent differences as well). Really fascinating.

The Complications of Sex

Carey Purcell engages the complications of sex in The Sex Myth, presented at HERE Arts Center in New York City.

Dramatizing the Divide Between Law Enforcement and Community

Jonathan Mandell writes about Theater of War’s production of Antigone in Ferguson in Brownsville, Brooklyn.

Revising and Feminizing the Fairy Tale in Anastasia

A fairy tale for our modern age? A consideration of Anastasia by Amanda Prahl.