On the Thought of Taking Action

When I was asked to write this blog, I did not estimate how difficult it would be to respond to gun control and how it connects to the artistic community. Gun Control Theatre Action. Swirling around my brain, these four words seem at times, vague and overwhelming. Gun Control Theatre Action. Where to begin? I was there, I participated. Armed with the playwrights' thoughts, I guided two casts of actors, both in Washington, D.C. and New York City. Yet, language can be impermeable, mysterious. At once, words join together to form a maze, which can sometimes seem an impassable obstacle. I think it would be of great assistance to break the phrase down. 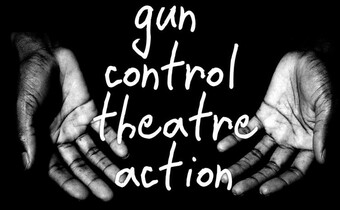 Let's start with gun. A gun can act as an instrument, a mechanism, and ideologically as a symbol or a message. The noun gun can also combine itself within a phrase as idiom—to “gun it”, to tell someone they have “big guns.” I've told someone they've had “big guns” before, so that seems recognizable. I don't believe I've ever associated the phrase “big guns” with the actual image of a large caliber rifle, or any type of gun for that matter, until I saw two Colt 45s — not to be confused with Billy Dee Williams—tattooed on a man's biceps. What is a gun if it doesn't carry out its intended business, just a symbol? Symbols can often be more potent than their material. Cotton and paper burn quickly.

Control is psychological and physical. Memories of control, as in “she's lost control again,” and how Ian Curtis “took control” of his final moments. Control is punk—to take control of a personal manifest for freedom, radical identity, radical self, to be nihilist. Control is a joystick. A joystick can be a trigger. It is the joystick that operates the games Metal Gear Rising, Tomb Raider, or Grand Theft Auto. I gave up that type of control when I traded playing Zelda for time spent outside. Control can be erotic, sexual. Control can be making art. The controls of our existence—scientific or spiritual. Who is controlling what? Control can be of time. It digs, it claws into the minutes of passing time, or perhaps the control of oneself to relinquish it and let things be just as they are.

Theater, the shape-shifter. The materializing art. My deeply embedded understanding does not first arrive at the idea of theater as the staging area for military warfare or the theater that plays itself out on political platforms. This notion of theater seems closely related to the issue of gun control. War is often waged on stage itself, or sometimes more so in the process of getting to the stage.

Lastly, there is action. This word is powerful on paper and more so from within. The action involved with getting up in the morning. The action of putting that cigarette to my mouth when I know I shouldn't. Action can be manifest. Its results can be more potent than the act itself. How many muscles does it involve to type a sentence on a laptop? Does it involve a like amount of muscles to pick up a coffee mug? Action can be language. It took brain muscle to write a complicated fellowship application the other day.. Action connects thought to doing. The act of remembering.

I grew up with guns. The guns lived like antiques on display at a museum, cramped behind a glass armoire. Something about their architecture, their gunmetal veneer and position made them inaccessible, a force to be reckoned with. I was told they were not to be touched or played with. A foil lived among them. Within the stack of six was a BB gun. One day, I shot the BB gun. It felt adequate. It blew out the tire of a neighbor's bike. Having shot both a handgun and shotgun later during the filming of a movie, my memory of the impact of the BB gun became tarnished. Action carries results. On one summer afternoon when I was quite young, my father pulled a gun out of the cabinet, which was not the BB gun. He said a raccoon was tearing up the garden out back and that he would put an end to it. At once, the guns in antiquity seemed to take on immediate presence. Killing this animal, this living thing. It felt wrong. He went on to explain that the animal had rabies. At the time, I knew rabies was something awful, something horrible. He believed he was trying to protect us.

How do we take action on the issue of gun control? Where do we begin as artists, as academics, as civilians to surmount such a complicated task?

Gun Control Theatre Action is a manifesto, made potent as a text by the word “action.”  How do we take action on the issue of gun control? Where do we begin as artists, as academics, as civilians to surmount such a complicated task? Consider reflection as an action. In our hectic daily lives, pausing for a moment to reflect can be substantial. On January 26, theater companies force/collision and Theatre J gathered at Georgetown University to read thirteen reflections on gun contro issuesl with a team of ten actors for an audience. On that same day, Molly Smith and her partner Suzanne Blue Star Boy witnessed thousands in attendance for their organized March on Washington for Gun Control. Reflecting needs no resources. The action of showing up in within each of us. Whether we show up to a play reading, a rally, to write a blog, or simply show up for ourselves by taking a moment to pause, we have taken action.

I love this, John: "The action of showing up is within each of us. Whether we show up to a play reading, a rally, to write a blog, or simply show up for ourselves by taking a moment to pause, we have taken action." I hope we can get the House of Representatives to "show up" for HR 1565 when they get back from vacation after Labor Day!