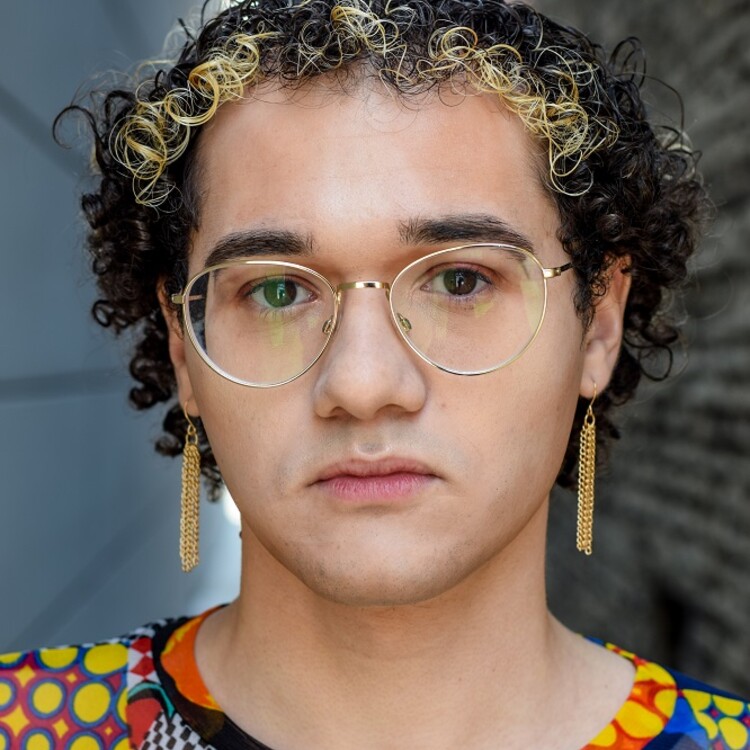 When I saw Will Wilhelm’s HowlRound piece about trans inclusivity in theatre casting, I had two simultaneous responses: pride for my comrade getting a platform to share their views, and sadness that trans theatremakers still have to plead with cis gatekeepers for jobs in theatre. We have been having conversations about inclusive casting with each other and anyone else who will listen for the half-decade I’ve been a part of the trans community, and they certainly started long before.

It makes sense why this is what we talk about. Trans theatremakers are here because we want to work in theatre, and we can only work in theatre if theatres will hire us, and the cis artistic leaders will only hire us if they can be persuaded out of their biases. But theatres and their leadership must do a lot more to challenge cisnormativity and transphobia than simply put us onstage. 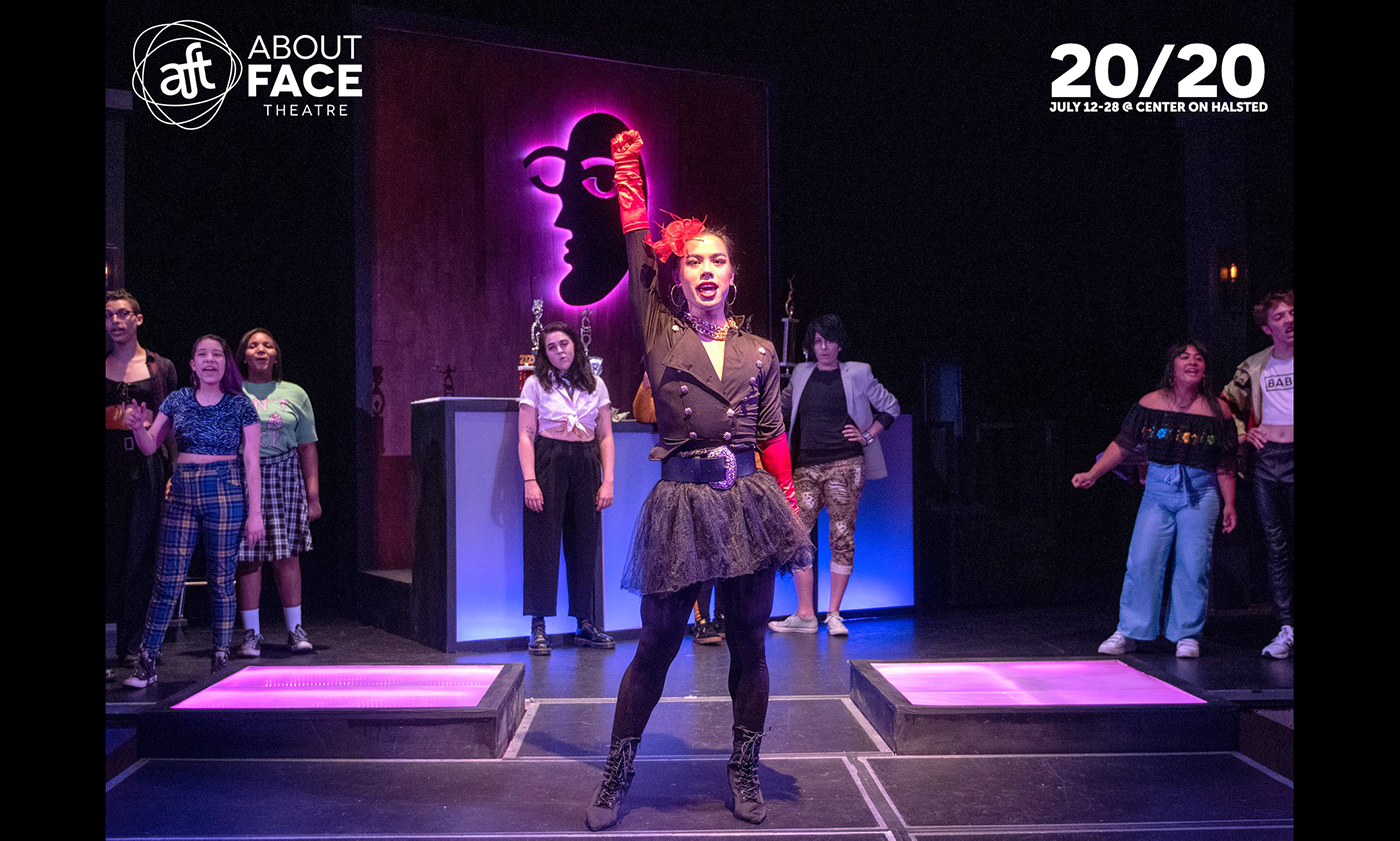 20/20. Created by the About Face Youth Theatre Ensemble. Directed by Megan Carney and Donny Acosta

The rallying cry for casting marginalized actors is that “representation matters.” Conventional wisdom says that if the average cis person is able to empathize with trans characters in a story they will be more sympathetic to the trans people they meet in real life. Additionally, the argument is often made that, for trans people—especially children—seeing ourselves represented in art helps us self-actualize. This is true to a certain extent. The cis person who sees trans characters onstage or onscreen may indeed stop considering the trans people he or she sees in real life as a rarity. And one of the ways marginalized people gain the courage to advocate for themselves is certainly through the knowledge that they aren’t alone in their struggle. But the challenges trans people face are material. They go well beyond personal or interpersonal attitudes. Trans people face housing and job discrimination that makes us more susceptible to cycles of poverty. We run higher risks of physical violence in public and in intimate relationships. And my “we” here is far from accurate because these are problems that disproportionately affect trans people of color, those without accepting families, and those without generational wealth—while I, as a white person from a liberal, well-off family, have the protections of my privilege. The best argument for casting more trans actors is that it gives trans people jobs—and ideally well-paying ones. But to truly make the content of theatre trans friendly, theatre companies have to go a lot farther.

The best argument for casting more trans actors is that it gives trans people jobs—and ideally well-paying ones.

It goes without saying that theatre companies should be hiring trans people at all levels of their organization, not just trans actors. But the hiring of trans artists and staff must be the beginning of a pro-trans theatre, not the end goal. Support for trans rights and challenges to the gender binary should extend into the work theatres make. If the only thing theatres are trying to say when they cast trans actors is, “trans people, they’re just like you!” it does a disservice to decades of trans thought, activism, and lived experience. Our experience of gender is, by definition, different than a cis person’s. And, because we live in a transphobic world, the material conditions we have lived through are different too. Modern drama has always been about the way individuals are shaped by social structures, and trans theatremakers can shed light on the way everyone’s lives are shaped by the cisnormative gender binary we live in.

Above all, trans theatremakers can bring a wide range of complex perspectives on gender to the art we make. All of us, in the very act of deciding to move past our assigned genders, have thought critically about the way gender impacts us, and all of us have asked different questions and come to different conclusions about what being trans means to us. This can be seen outside of the theatre field in the commentary on trans writer Andrea Long Chu’s work by other trans people. Chu’s contrarian, often nihilistic view of gender has received criticism within the community for being too extreme, misrepresenting the trans experience, and being limited by her scope as a white trans woman pursuing a PhD at an elite university. The impressive thing about these critiques isn’t any absolute right or wrong perspective, but the sophistication with which all these trans people talk about gender when given free rein to do so. I want to see that same sophistication in trans theatre. Our perspectives on gender are diverse, complex, and different from what cis people have to offer. Beyond just scoring a theatre company some diversity points, we can expand the scope of the art being made.

Creating theatre that truly challenges cisnormativity and transphobia won’t be as one-size-fits-all as putting more trans people on the payroll.

Now comes the hard part. Creating theatre that truly challenges cisnormativity and transphobia won’t be as one-size-fits-all as putting more trans people on the payroll. Sometimes it will mean giving a roomful of trans theatremakers carte blanche to make whatever production they want. Sometimes it will mean letting trans company members in a majority-cis rehearsal room poke holes in the interpretation of gender that the playwright or director is offering. Sometimes it will mean one trans theatre artist challenging the perspectives of another trans theatre artist’s work. Sometimes it will even mean a rehearsal room of cis people holding themselves accountable for how their production perpetuates the gender binary. Equality and justice don’t come from laying out strict rules for everyone to follow. They come from thinking critically about the material conditions of the world, why and how they operate, and what can be done to make them better.

This can be done by bringing more complex issues to the stage, as Taylor Mac’s Hir does in its exploration of masculinities between transmasc and cis male siblings. It can be done through escapism, by showing an audience new ways to do gender, as in the queer fairytale musical Head Over Heels. Trans artists can—and do—write new works that complicate the gender binary. Trans artists can complicate the binary in existing works as well. The fact that trans actors, directors, playwrights, and designers bring new interpretations of gender into the theatre is never a bad thing, and our perspectives should be celebrated and honored throughout the rehearsal process, not disregarded as superficial to the rest of the story. I don’t need to see how a trans actor can play Hamlet just as well as a cis actor, I need to see the way a trans actor’s Hamlet brings something to the character that a cis actor wouldn’t be able to offer.

Theatre isn’t just about which artists are in the room but about the work they’re making. If trans inclusion only goes so far as hiring actors, we’ll end up with a lot of half-baked portrayals of trans people onstage. We need to be given the creative freedom to explore gender in the text, staging, and design just as much as in the audition. Our diverse experiences need to be welcomed for their complexity, not judged as the “right” or “wrong” portrayal. I ask theatre’s decision-makers to listen to us and see us as artists and collaborators in a collaborative art form, not just consultants on whether a particular play is doing trans stuff right. Yes, help us make a living by hiring us, but also help us shape the world. There’s a lot more to gender than just being seen, and we want our art to do more than just put us on display.

Glad to know of this company's work and their awesome Outreach.&nbsp;

Glad to know of this company's work and their awesome Outreach.