Reflections from a Reluctant Californian

I was born and raised in Washington, DC, where I spent much of fifth grade on my state project: a mixed media scrapbook illustrating the economic, industrial, agricultural, cultural, and geographical aspects of a mythical state on the Pacific coast with crazy tall trees, mountains, deserts, navel oranges, and oil derricks. In 1973, my California was a cardboard and tempera painted bas-relief map pasted next to an autographed photo of Governor Ronald Reagan.

In 2001, my son and I headed west. Leo was about to start school and I had accepted a faculty position at the University of Redlands, seventy miles east of Los Angeles. Landing in that mythical state of my scrapbook, we were equidistant from ocean, mountains, desert, and at the edge of LA’s smog belt. Leo had an orange tree outside his bedroom window! My new California residence also meant reconnecting with theatre companies I had started to work with from afar. As I got to know my new “small town” home through neighbors and university colleagues, my work with Cornerstone Theater Company expanded my community to include Watts and other pieces of Los Angeles where we, as a company, were guests in residence.

Then in 2004, The Cornerstone Institute Summer Residency was conceived as an immersive four-week program wherein people would come from all over to learn about making plays the way we do, and to join us in doing so. That summer, Leo and I visited the first Institute in Lost Hills. Driving the I-5 North through the Grapevine, carrying ingredients for a Greek supper, I prepared a meal to share with the company and we stayed to watch the play. That summer’s ambitious project was a success and as the annual adventure continued, my son and I were lucky enough to be a part of it—between the two of us filling the roles of costume designer, set designer, company cook, electrician, fight choreographer, and light board operator among others.

When I set out to participate in my first Cornerstone Institute, I expected to learn about the play and about our students, to make some art, and to take my son on an adventure with me. Ten years later, there’s so much more that I’ve learned.

August 2014, I am in the gymnasium of the Sunset School in Weedpatch, CA, with California: The Tempest, a play that bridges all of the institute communities. This, Arvin, is the first stop of the tour, and there is a lot to do! As I finalize paint and prop notes alongside community members, Institute graduates and fellow Cornerstone artists, I am struck by the way that the representations of Californians embodied in this play resonate within me. California: The Tempest adapts Shakespeare’s play to our time and our place, and uses the stories of the communities in which we have worked to ask what it means to be a Californian. It is Prospero’s California. It is the California of ten summer residencies. And on this blazing hot day, it is my California. 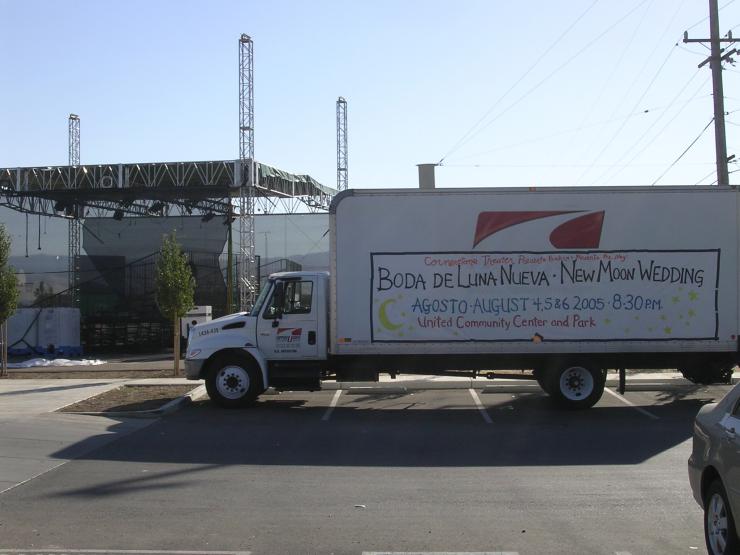 In 2005, for our second summer institute we were in residence in Grayson and Westley, where our play was an adaptation of Lorca’s Blood Wedding: Boda de Luna Nueva. My son was nine years old, and was cast as part of the ensemble, joining local children in the play’s musical moments. An avid reader, he was delighted that our accommodations were in the library of the Grayson Elementary School in Westley, where Cornerstone had its home base: living /dining quarters, rehearsal room, and costume/props shop. I designed the costumes for the play. The costume shop was in Room 6, between classrooms used to house our institute students, and right off the courtyard where our portable outdoor showers were set up. 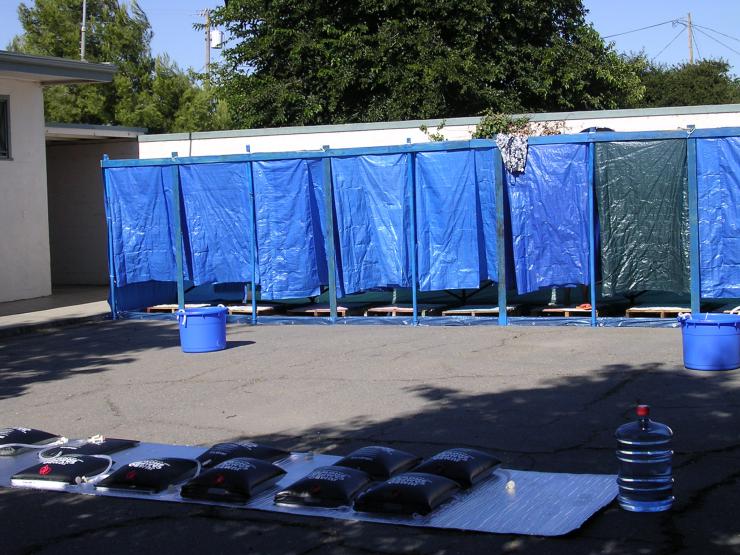 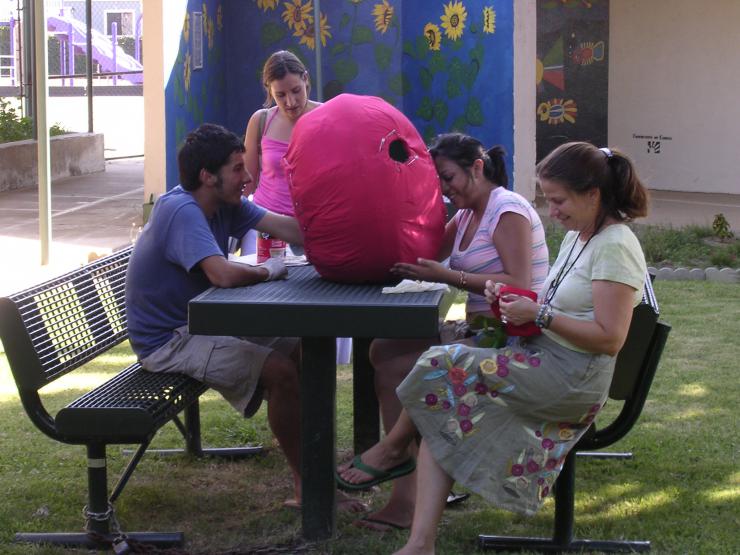 Over these ten summers, I have often found myself in unusual circumstances: in the heat of the Central Valley, as I was in Grayson, sitting at a picnic table sewing tomato costumes; in misty Eureka, building scenery from historic architectural elements salvaged from the grounds of the Blue Ox Mill Works for Jason in Eureka; in dusty East Salinas where the Vineyard Church lot near the rodeo parking grounds was home to our crafting of crow masks for Plumas Negras. Designing ambitious projects in remote locations in a compressed timeframe, where I am both designer and crafts-person, has been challenging, fulfilling, and informs the way that I approach my design work in every context. My California is one where we seek out the yes-sayers wherever we go. Yes, we can do that play here. Yes, we can find the people who will fill it with life and joy. Yes, we can find a way to create meaningful plays with high production values that celebrate the artistry of our lifelong practice with first-timers and community members by our side.

Boda de Luna Nueva was performed on the basketball courts across the street from the United Community Center, just a few hundred yards from the 1-Stop, near the edge of a field bordering Howard Road. The bleachers were set up so that the audience had a view of the trees and the road beyond the scenery on the courts. In our adaptation, Lorca’s character of Death is personified as La Clandestina who appeared pushing her loaded cart through the darkness looking for a place to cook a batch of methamphetamine. She was followed later by the moon, La Luna, who approached through the same darkness across that field at the edge of the road. There’s not a lot of electrical power out on the basketball court, and it gets very dark. While La Clandestina was top-lit by a lantern rigged to her cart, our idea for La Luna was that she would approach through the dark night wearing her source of power, illuminated from within. We devised a way to incorporate light into her costume: both to illuminate her and to cast beams ahead of her. The Grayson I know is one where MaryEllen, the pastor’s wife, cleans the church in the morning and arrives for a fitting that afternoon, where she is game to strap on battery packs and lighted gloves that we built in our makeshift workspace at Grayson Elementary School. The Westley and Grayson I know have dark, dark fields across which the moon approaches the stage, speaking out against the roadway in the background to a packed “house” of local audience members stacked onto bleachers, hearing an old play that resonates with their lives now.

October 2014, the third stop of the tour, we are back on those same basketball courts across from the no longer brand new community center, and traffic still slows down to pass between the courts and the center, especially when there is a theatre company in town, setting up our rig. It’s pretty flat around here, and you can see the trusses, bleachers, and equipment from quite a ways off. There’s a new (community designed and built!) sign at the turnoff, but the 1- Stop is very much the same. 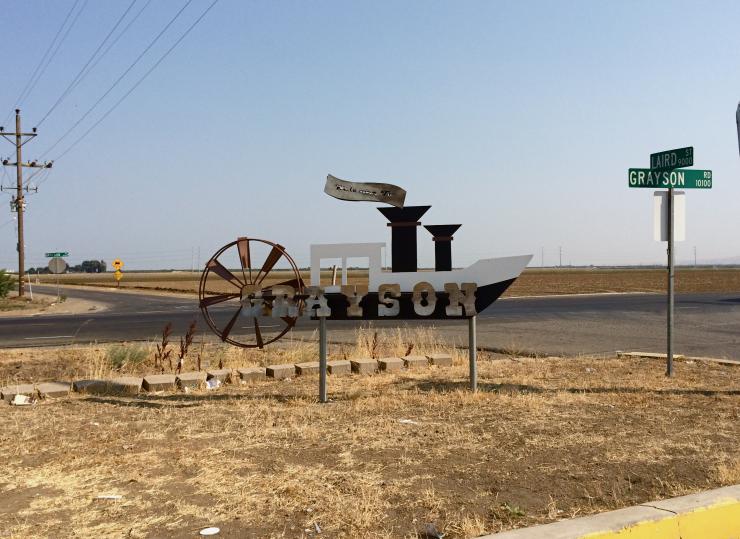 Arvin, Lost Hills, Grayson: this is the California that we often drive through on our way to someplace…else. Exiting the freeway just past the Patterson truck stop and driving east on Howard Road brings me to a place shaped in my memory by the experience of working here to make a play. When I set out to participate in my first Cornerstone Institute, I expected to learn about the play and about our students, to make some art, and to take my son on an adventure with me. Ten years later, there’s so much more that I’ve learned—about agriculture, people, and place. About encountering a place through the shared work of making a play with its people who will, perhaps, see their home and imagine their future in a new way. About challenge, stamina, friendship, resourcefulness, and joy. These experiences have not only built the California that I know, but the California that I am. Sharing thoughts during our company circle before the first performance of California: the Tempest, I realized quite suddenly that despite my east-coaster identity, I am indeed a Californian, and that The Tempest is my California.

You describe the Institute so wonderfully. It is such a special experience and you have brought it to life. Looking forward to reading about the next stop for The Tempest.

Loved reading this, Nephalie! I was born in Hanford, Ca and spent the first few years of my life in Corcoran. I can see all those places you mentioned in my minds eye and its great to know that Cornerstone is getting out there. Amazing! And inspiring.

Such a compelling story. I am so intrigued by this way of making theater.

The Future Is in Culture
Ash
Marinaccio
Iman
Aoun
Essay

The Future Is in Culture

A Conversation with Iman Aoun

To end the season, this episode will have Marina and Nabra sitting down to tea to talk about highlights from this season and what is to come in the future.