Recommended
Devising Our Future
HowlRound Theatre Commons
Most Discussed
Naming the Trope: A Deep Dive into the Harmful Uses of Disability Stereotypes in the American Theatre
Ben Raanan
Most Watched
A Conversation About the Making of Addressless
Tuesday 11 January 2022
Upcoming
Livestreaming a Convening: The Ellen Van Volkenburg Puppetry Symposium
Saturday 22 and Saturday 29 January 2022
Essay by
Ian
Chandler

What Cardistry Has to Say About Theatre

It’s something entirely different. It’s drawn comparisons to casino dealing and juggling, but calling it “card juggling” would undermine its aesthetics. It’s a new type of performance that’s dominating a corner of the world.

The term is a portmanteau of “card” and “artistry.” Those who practice it are called cardists, and they artistically manipulate playing cards. It’s not card magic or gambling; rather, it’s composed of fluid movements and eye-popping displays. Though it emerged from card magic, it’s taken on a life of its own and generated a substantial following.

One of the most interesting aspects of cardistry is its medium. It’s rarely performed live. Instead, cardists make videos. They share their performances on YouTube, and the audience is most often composed of other cardists. Most videos follow the same format: rap or EDM in the background with the camera fixed on the cardist’s hands and torso. Usually, there are video cuts between moves, giving it a segmented feel. These videos are the main distribution method for cardistry performances. The audience is invisible, and there is little connection between the two sides of the screen. 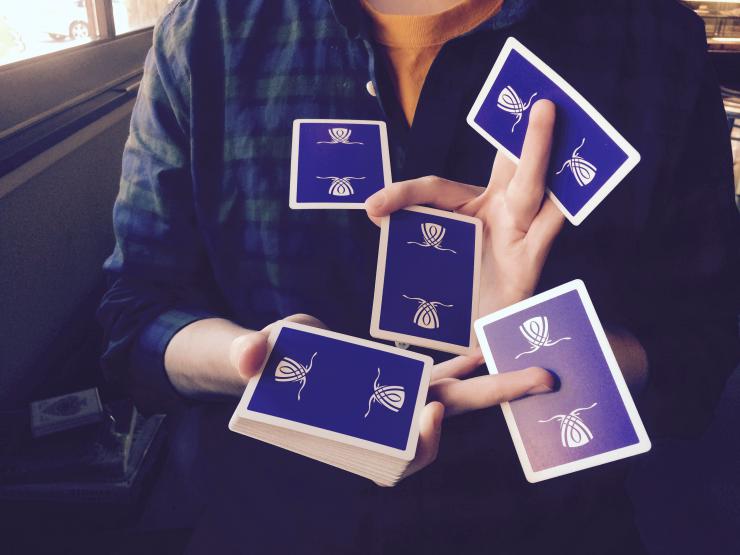 Of course, this is greatly at odds with the way theatre has been produced for centuries. Although performers are used to not seeing the audience, the spectators are still there. It is this direct, human-to-human paradigm that has given theatre its identity. But if cardistry is a sign of the times, then it seems live performances are going extinct. However, theatre need not give up the ghost. It simply needs to consider the quintessential present-day format: the video.

Cardistry, with its broken-up video format, is perfect for the twenty-first century. Cardistry is meant to be fragmented. If card magic is narrative, then cardistry is poetry. It evokes a certain feeling within a short timeframe and doesn’t demand extended attention—it expects a short attention span from the viewer. The videos are a way of providing instant gratification, a fleeting moment of commitment, and nothing more.

Cardistry’s format has helped it achieve a wide appeal and “shareability.” Through bite-sized videos on social media, cardists bounce ideas off of and learn from one another. The majority of cardistry takes place on a screen and not in real life. When cardists do hang out in real life, they usually film the encounter. Everything comes back to the video, the immaterial performance for an unseen audience.

It is this direct, human-to-human paradigm that has given theatre its identity. But if cardistry is a sign of the times, then it seems live performances are going extinct. However, theatre need not give up the ghost. It simply needs to consider the quintessential present-day format: the video.

As Marshall McLuhan said, “The medium is the message.” Theatre’s medium—live performance—is increasingly archaic. For one, it’s tangible: playgoers walk into a brick-and-mortar theatre to watch other human beings. It requires effort and time, which most Americans don’t have, whether by choice or circumstance. Furthermore, it requires viewers to trace a cohesive narrative with multiple characters and plot points. All of these factors create a message that’s unappealing to the public eye. Why trudge to some building to watch a performance when you can view it online? Of course, theatre isn’t dead, but its medium is being questioned by the world at large.

Back in 2009, Guardian blogger Matt Trueman noted the growing implementation of media within live theatre. Six years later, theatre has even more inundation to deal with. Digital is the new physical, hard copies are going extinct, and it won’t be long before everything moves to the Cloud. Reality is being embedded instead of enacted. Theatre provides a real, physical experience; a different view of the human condition. But with every new iPhone that’s released, this type of experience falls by the wayside.

As scary as it may be, the computer (or phone) screen is the new fourth wall. Cardists are performing for an audience they may never see or know. In some ways, the performers become objects. In cardistry, the performer’s hands are the most important, not the face. These conditions make cardistry ideal for sharing via video—the medium of our day. Performances of any sort are steadily migrating to video, and theatre is no exception. Its future might live behind the screen as well.

Though it may seem frightening, this sea change might not be so damning. Theatre is a presentation of dramatic art to the masses, and art is an ever-changing entity. Dario Fo said that “a theatre, a literature, an artistic expression that does not speak for its own time has no relevance.” Cardistry, with its terse videos and social media appeal, is an art—a theatre of its own, if you will—that was born into a digital world. It flourishes in the online space, allowing cardists from opposite poles of the globe to connect and share ideas.

Theatre does not have to see an end in the relentless waves of media. Instead of drowning, theatre can ride the waves and float on to a contemporary audience. It can use the form as a tool to portray humanity in a different way. After all, theatre illuminates what it means to be made of flesh and blood, and that’s something people need to be reminded of. The entire world is visceral; the digital realm is a faint shadow of reality. Theatre has the opportunity to show people what they’re missing by using a medium that they’re comfortable with. Theatre shouldn’t succumb to media, but there’s no denying that embracing the power of today’s technology could carry theatre’s message further than ever before.

Aesthetics
Most Discussed
Naming the Trope: A Deep Dive into the Harmful Uses of Disability Stereotypes in the American Theatre
Ben Raanan
Most Watched
A Conversation About the Making of Addressless
Tuesday 11 January 2022
Upcoming
Livestreaming a Convening: The Ellen Van Volkenburg Puppetry Symposium
Saturday 22 and Saturday 29 January 2022

Super-interesting article, and I can't wait to get online and see some cardistry. I would, however, like to add to your thoughts here and suggest that the rise of immersive and site-specific theater is an example of theater speaking to its time. As analog and inconvenient and sometimes less than comfortable as these forms are, they are growing in popularity at an exponential rate. Why? I believe that it is because, as (as you point out) live, non-screen entertainment and experience diminishes with each iPhone model, hunger for real-time human connection to physical experience grows. So although the traditional experience of narrative 4th-wall theater may be less popular to audiences as they can get their narrative fill through Netflix, YouTube, etc, deeply live, subjective experiences are ever more sought after. (Look at travel research-- travelers are looking for experiences, not perfect views they can take video pictures in front of, as in the old days.)

So I would say theater is indeed evolving for its time. One way is a leaning into technology, which you suggest and which is an incredibly exciting development to track and be pert of. But another is a leaning into theater's deepest roots as a vehicle for live human connection and analog experience of our physical world, however uncomfortable or inconvenient these things may be to a modern audience. We crave them, and as they're less a part of our daily experience, we will only crave them more. Theater, especially work that celebrates liveness and audience experience and not just narrative or story, is an ideal form to satisfy this hunger. I'm excited to see what new innovations occur and really glad to be working in the field.