Wobbling on the Political Lines (in six inch heels)

Does a feminist activist theater performance automatically imply a left-leaning, patriarchy-smashing, liberal, “bra-burning” political event? What happens when teenage girls and adult women collaborate and discover that their political beliefs about feminism today teeter precariously on a squiggly line? In response to the HowlRound thread investigating the if and how artists of different political beliefs make and experience theater, I present a case study of a troupe of women who entered a theater process seemingly sharing ideals and political values under a banner of “feminism.” I share the creation process of BodyVOX!, a feminist-activist production written and performed by nine teenage girls, and co-directed by Fordham professor Aimee Cox and myself in New York in May 2013. We discovered through our process that a unified, feminist call to action might be as challenging (and painful) as running a marathon in six-inch heels. 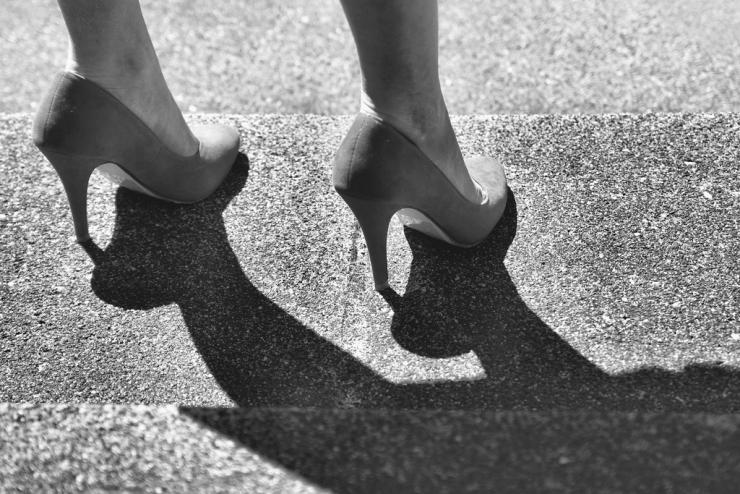 BodyVOX! was created through a collaboration between SPARK Movement, an intergenerational, girl-fueled, feminist activist movement; viBe Theater Experience, a girls’ performing arts education organization; and Fordham University’s African/African American Studies and Theater departments. The writer-performers were recruited through local schools and were selected from an audition and interview.

As executive director of SPARK, I launch and support girls’ activism projects related to SPARK’s mission to end the sexualization of girls. This “nonpartisan” issue has allowed SPARK to engage with some unlikely bedfellows. For example, we oppose “sexy” children’s Halloween costumes, seven-year-old lingerie models, and “girls’ toys” that focus on princess training. However, we do support healthy and positive sexuality and encourage frank talk about girls’ sexuality, desire and pleasure. Not surprisingly, many conservative activist groups such as Concerned Women of America join us in our actions to remove “sexy SpongeBob” costumes from store shelves, though their homophobic and anti-abortion advocacy leaves us shaking our heads and fists. Sharing selected issues with political foes is not unique in the activist world, but what happens when theater collaborators find ourselves on opposite sides of the fuzzy political line that separates us?

We began our process responding to two statements: “I feel sexy when…” and “I feel sexualized when…” The entire text and choreography for the production erupted from the examples shared by the girls. They danced, ranted, celebrated, joked, vamped, whined, analyzed and shared stories of street harassment, duckface poses for Snapchat, Facebook “likes,” sexting, and dance club booty shaking. We stitched together a performance illuminating the complicated ways girls navigate the desire, pleasure, attention, and shame that their bodies communicate in their lives and relationships.

After graduating I realized I missed having unlimited access to the resources I had found through my university’s library. Immediately I thought, I could remedy this by subscribing to everything.

Complicated politics erupted when some girls stated their pleasure and delight in the verbal validation (aka: catcalls) they receive when they feel they look “hot.” Others proclaimed that unwanted, un-asked-for compliments were harassment, invaded their personal space, and led to fears about walking in public spaces. One girl’s “feeling sexy” was another girl’s “feeling sexualized.” Simply stated, conservative politics articulate a need to “protect” girls, ban pornography, censor advertisements, and boycott certain companies. Liberal and libertarian politics of choice and government devolvement allow for girls to express themselves any way they desire, without policing or shame. The latter beliefs led eighteen-year-old Emma to celebrate her personal sense of fashion freedom and to critique the notion that a girl who dresses in sexually provocative clothing should be treated disdainfully and called a “slut,” a negative, misogynist, sex-shaming word. Emma wrote and performed this ode to her high heels:

With my wedges, stilettos, pumps and platforms, I embrace the raw power which is mine… My heels do not cripple me. They do not reduce me to weakness… They are not an invitation—they do not speak for me. With them, there is six more inches of me present in the world.

After three weeks of intensive rehearsals, the day before the first performance, we did our first full run through with costumes and music. Nine girls in their black leggings and fitted red shirts breezed both confidently and awkwardly around the stage marking all the right poses with hips and chests thrust out and bodies wiggling and jiggling. In our feminist, activist performance meant to address the issue of sexualization, I noticed that we had in fact perpetuated the very concepts we were seeking to challenge and critique—that girls’ bodies are meant to be gazed upon, stared at, and objectified. On a bare stage, in costumes that hugged every curve, we seemed to invite and demand that the girls’ bodies be the center of every moment. I was horrified. I questioned whether the performance space could aptly serve as a valid site for critique of the sexualization of girls. Although the girls were unfazed.

In our feminist, activist performance meant to address the issue of sexualization, I noticed that we had in fact perpetuated the very concepts we were seeking to challenge and critique—that girls’ bodies are meant to be gazed upon, stared at, and objectified.

My personal politics differ from the message some of the girls wished to communicate about self-sexualizing and “owning” your sexuality. I feel that hypersexualized fashion is sometimes not so much a “choice” of the wearer, but one of few options (dictated by patriarchy) in a limited buffet of options of “acceptable” female beauty. As an adult collaborating with teenagers, I feel my beliefs, grounded in my own experiences and my consciousness of a sexist media, give me authority to edit and suggest changes to the girls’ costumes and text to “tone down” the sexualizing content. In the end, we discussed these issues together and collaboratively decided on a middle ground of presenting the uncensored content. We decided to break the action mid-play and engage with the audience in a conversation about our process, confusion, and decision-making. Instead of adhering to one political lane, our show offered a rainbow of options, demanding the audience think critically about the choices they make in their own lives, and the consequences of these choices.

Fascinating read. I'm sharing this blog with the "Yeah, I Said Feminist" Facebook group where we have had similar conversations about the line between empowerment and exploitation.

Thank you so much. I'm troubled by this paradox in my mid-40s--question my whole "pro-porn feminist" stance from my 20s. I'm not sure there's a right answer; just that what I was comfortable with then I am not comfortable with now. Really great to read about working this idea out in the context of collaborative theater--not just directors and participant girls, but actors and audience.

"Princess training." Love this. Terrific post and congrats on the wonderful work you're doing!

Thank you for sharing details of this amazing work. It sounds like this project did a lot to crack open the complicated dynamics of the "post-feminist" era. I am particularly struck by "One girl’s “feeling sexy” was another girl’s “feeling sexualized.” I would love to connect off-line and learn more about your work.

thanks, christine! email me at dana@SPARKsummit.com

No Borders’ Feast: A Reckoning at the Royal Court/On the Square
verity
healey
Nastazja
Domaradzka
Essay

No Borders’ Feast: A Reckoning at the Royal Court/On the Square

verity healey speaks with Polish theatremaker Nastazja Domaradzka about No Borders, an arts program she created in collaboration with the Royal Court Theatre in London that prioritizes migrant artists’ experiences and voices.

The Anti-War Play to End All War Plays: The Last Days of Mankind, 1922 to 2022
Joel
Schechter
Essay

Theatremaker Joel Schechter explains the importance of Karl Kraus’s The Last Days of Mankind and why he believes its anti-war message is still relevant today.