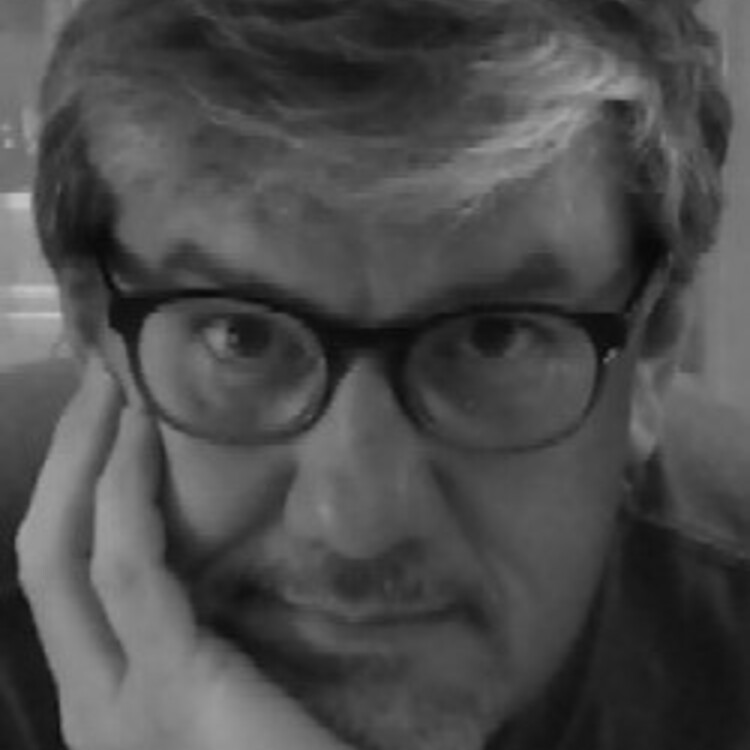 Alienated, alone and in the majority

On the face of it, “other white men” isn’t a topic you’d necessarily expect an innovative young director and devised theater practitioner like Paula Jo Maske to devote an extensive amount of time to. Even with shifts in cultural consciousness and artistic practice over recent decades, few subjects, if any, remain more ubiquitous (or less interesting) in academe, in popular culture, or on stage.

But having encountered John, the feverish sole character in Vogue Men’s Fashions whose stunning late July premiere capped a ten-month endeavor called the Other White Man project by Urban Garden Performing Arts, it makes different—and better—sense than might be anticipated.

For as it turns, Maske, the artistic director of this devised theater collective, has decidedly placed the emphasis on that first word in her project’s title. In looking for—and finding—an Other within that dominant social group and selecting three artists from that number as collaborators, Maske hardly makes a myth of the monolith in this hour-long work. But as she and her cohorts interrogate the alienation and disaffection present even in the heart of patriarchy (and Southern patriarchy, at that) they discover that its presumed borders are anything but continuous.

The process and its outcome mark something of a departure for the ten-year-old company which moved to Raleigh, North Carolina three years ago. Its structure—one writer, one actor, one designer, one director—reflects an effort to strip a collaborative structure, in Maske’s words, “down to the bone.” Its overtly theatrical result, in this multi-media performance, marks a return of sorts for a group whose explorations have taken it far from that art form’s conventions.

Up to now, Urban Garden has placed primary emphasis on bringing together artistic groups that usually don’t interact in order to achieve what Maske terms “integration of the arts, in, for and with communities.” When they do bring artists from other mediums together, they collaborate with them as equals, not subordinates to a preconceived theatrical concept.

Urban Garden’s first regional project, Spectrum Spectre, was a movement and design installation with regional fashion designer/fiber artist Gabrielle Duggan. A subsequent collaboration with choreographer Heather Cannaday created enactments of the art-folk songs of Indianapolis-based Liz Janes—as Janes performed them, live. The songwriter termed the result a concert that was “like a one-act play.”

As they considered those topics, Maske found the strangest thing within this dominant demographic group: men who felt fundamentally disenfranchised and estranged by the social structure they were a part of.

Since then, the group has cross-wired roots music devotees (in Mark Twain’s Joan of Arc), foodies (in the “performance baking” of The Bread Show) and world-class video game designers from the region’s Research Triangle Park (in The Game(ing) Show) in a series of works that, while having performative elements, have been anything but traditionally theatrical. “Artists are often undervalued outside of their own circles,” Maske notes. “It’s really exciting to find ways to introduce audiences to artists outside of the circles they typically look to. How often does the audience for Bevel Summers (a locally-based Americana band) necessarily see the choreography of (regional dancemaker) Nicola Bullock? And how often would either of their audiences see the work at Antfarm (a Raleigh visual art collective)?”

After exploring unorthodox paradigms in collaboration, production and performance to cross-pollinate disparate regional artistic communities and audiences, devising a relatively conventional work for stage might have seemed a bit mundane. But, after completing a feminist durational installation piece, “Fertile Crescent,” with Duggan in mid-2012, Maske felt a little mischievous.

“It was almost a joke, to myself, at the start,” she admits. As she thought of new collaborators Richard Butner, a genre fiction writer; Jon Haas, a video and environment designer who has collaborated with Burning Coal Theatre and Leah Wilks Dance; and actor John Jimerson, Maske asked herself what they had in common.

“Of course you could ignore it, and that would be sort of a contemporary thing to do—‘no one is gendered.’ Or you could go straight at it, instead.”

Maske opted for the latter. The group focused on the trio’s experiences growing up as white men in the South during the last thirty to forty years: What were they taught about being a man in that problematic culture? What have they learned differently, since?

As they considered those topics, Maske found the strangest thing within this dominant demographic group: men who felt fundamentally disenfranchised and estranged by the social structure they were a part of.

“The Other is never seen as a white man,” Butner, who served as the project’s playwright, notes in a post-show interview. Still, he and his colleagues assert that, for themselves and a number of men like them, otherness remains a core feature of their identity. “It’s an interesting feeling, being isolated in a majority,” says designer Haas. “It goes down the line, through all the things I consider my identity, from my socioeconomics to all the things that I find valuable that the people around me don’t. That’s not to say that in my entire life I’ve never felt that I’ve fit in. But I have often felt, through school and in interactions with my peers, an otherness, a sense of being alone.”

“You struggle with where your voice comes in—or if it can,” Haas says. “It can be easy to feel powerless, and not understood.”

“You’re torn between ideas of masculinity we’re now seeing as clearly problematic and on the way out,” adds Butner, “but you find you’re still being judged by those standards. And that’s happening as you’re trying to be more aware of standing and privilege, and trying to create a more liberated world.”

“There’s a tension,” he concludes. “And a confusion.”

Those two terms definitely apply to the character of John in this augmented solo performance. In actor John Jimerson’s performance, he’s an unquiet man whose memories and ghosts have pursued him like furies in full flight to this venue: an intimate, upstairs room in the back of what was once a clothing store in the center of Raleigh’s downtown district.

(Other ghosts could easily be said to occupy this space as well: It also was the last known address for Raleigh Ensemble Players, the region’s oldest alternative theater company, which defaulted on debts totaling $250,000 and closed without warning in May 2012, after a thirty-year run.)

John briskly strides in and single-mindedly sets up a digital video camera and tripod. Upon noticing us, he seems taken aback for a moment—before giving us a grin far too friendly for total strangers. It’s eerie as he cautiously, wordlessly, approaches an audience member, slowly waving his right hand back and forth in front of her face, as if testing the woman’s object permanence. For a moment he marvels, silently, at the ends of her hair, before stepping back to address us all.

“So you know why I’m here,” he continues. “I’ve been here a lot over the years. But today I’m going to fix it.”

“Literally, fix. As in, ‘to assume a solid and unified form.’ Because I’ve been feeling very disunified.”

And with those words, a thirty-something jigsaw man tries to put the pieces of a life back together. Gradually it becomes clear that, as his witnesses in the audience, John believes us to be long-banished subpersonalities, reuniting here in a manifestation of a form of multiple personality disorder. (It’s a pointed metaphor that so many of those individuals so long estranged are members of other ethnic and gender groups.)

The video camera mediates this desperate attempt at reunion. “You’re never more real than when you’re on camera,” John reassures us, as he attempts to document the reality of our presence, and a series of vivid and painful memories suddenly projected, in Haas’ atmospheric, imaginative interactive video design, against the rear wall of the studio. When a flashback of a small girl in a playground derails his discourse and forces him to his knees, he first cowers, and then brandishes the camera at the projection in a manner suggesting a crucifix directed at a vampire.

At times he cradles the camera as tenderly as a child, amidst confessions about his past that are sometimes manic, sometimes nerveless. At other points he seems on the verge of crawling into it, in a desperate attempt to reach the enigmatic person he’s confessing to.

But as those memories and visions from his earlier life contradict the versions of events he’s telling us, we wonder if John is hellbent on some shattered ritual of reintegration—or frantically rewriting them instead, swapping their messier details for anodynes more in line with the dominant culture?

The character invokes—literally at times, given Haas’ visuals—memories of a stern grandfather, who doesn’t recognize when a small child is freaking out at a movie. Later, John watches the same man chase down a car of teenaged boys after their driver swerves to hit a turtle in the road. Later still, our character experiences disgust with his grandpa’s easy racism. And after that, John’s speechless when his grandfather hands him a historically problematic, military family heirloom with the charge, “Do your duty. Do you get me, son?”

All of these appear to have something to do with being a man, in this world, and in this time.

But, significantly, Vogue Men’s Fashions asks—without ever answering—exactly what a conscientious, dutiful son owes a broken map of expectations, folkways, beliefs and prejudices that have led him to the blind alley where we find him here.

“As we questioned where gender identity comes from, what it means, and the places it has been challenged, the shape of the whole of the piece made more and more sense,” Maske observes. “We weren’t trying along the way—you get to the point where you stop thinking about the big themes; you get very specific in terms of story and location. But then you look back. They’re so foundational, so subconscious. They’re there.”

It’s telling that, after some pseudo-scientific speculation on alternative universes, John’s character becomes obsessed with one by the work’s end. It’s the one where everything in his life actually worked out—or worked as he now imagines it might have.

In that world, the map above leads to the church where he marries his high school sweetheart (instead of meeting her and her husband, as he once did, by chance in a local bar, after well over a decade had passed). It leads to a house in the suburbs, and a hospital where that imaginary creature (whom he’s previously described to us as “a really interesting person, for a while at least”) gives birth to their daughter.

The map leads him anywhere in his fevered discourse except here, and now: alone in a backroom, armed with only a video camera, cornered by his ghosts.

Their number, as it turns, includes us.