All or Nothing | HowlRound Theatre Commons Skip to main content

The Life of an Improbable Ensemble

A few years ago at the Theatre Communications Group (TCG) Conference, I kept finding myself in the same conversation.

Them: (looking at my nametag) What’s Strange Attractor?

Me: It’s a devising company I run. We create original shows in Providence, Rhode Island, Philadelphia, and Juneau, Alaska.

Them: Wow. That’s a cool model!

At first I was pretty impressed with myself. This fledgling company I was dedicating my life to was getting props at the national theater conference. Eventually, however, the praise wore thin. I realized that I wasn’t describing our work or our process—I was describing the geographic facts of our company. It’s not really a model. We didn’t seek it out or create it intentionally, and if any of us would just throw in the towel and move closer to each other, it sure would make things easier. Strange Attractor makes work in those three cities because we stumbled into ensemble-hood.

In 2009, Roblin Davis, who lives in Juneau, invited Aram Aghazarian in Philadelphia and Jed Hancock-Brainerd and me in Providence to be in a production of Eurydice he was directing at Perseverance Theatre. While there, Perseverance offered us studio space to create something. Having studied together at LISPA, we were excited by the opportunity and casual about the outcome. We didn’t need a director or a playwright. We were actor-creators who invented images and characters, refined them over time, and then sculpted them into a play.

We decided to work with the theme of never-ending war and torture, spending our days watching Errol Morris documentaries while reading up on the latest bombings and attacks, and our evenings creating scenes of soldiers and terrorists in both literal and fantastical ways. Though we didn’t always agree, we respected each other’s choices. We loved the piece we made, which ended up being a wickedly funny, quick-change show, further cementing our mutual admiration, as our research could have easily lead us down a much more earnest path. We also loved being in Alaska.

When the artistic director of Perseverance offered us the opportunity to use their studio space again for a new project, we immediately proposed creating a play based on Ibsen’s Brand, which has often been called “unperformable,” and made plans to return. When Jed and I got home, we were offered space at the now-defunct Perishable Theatre in Providence to continue  working on it. We created a schedule to build one show in two cities: three weeks in Providence with a phase one work-in-progress showing; four weeks in Juneau with a phase two work-in-progress showing; three more weeks in Providence with a two-week run of the show. 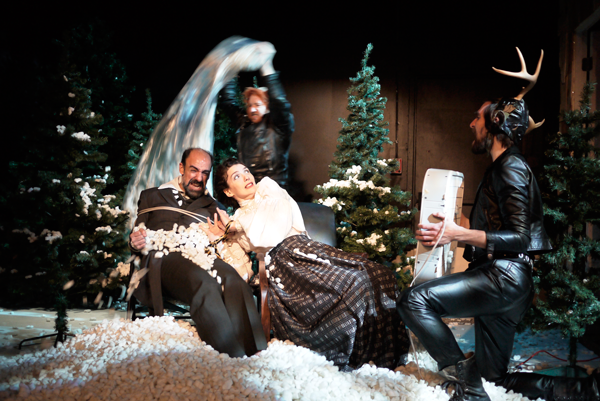 In this, Strange Attractor’s first major process, we put our commitment to the test, and through that difficult process, we became an ensemble. We still worked without a director, but unlike our first casual process, now we cared about the outcome. We’d fundraised for airline tickets and stipends and gotten our communities excited about our company. Suddenly it wasn’t enough to make something—we wanted it to be good. Our jumping off point was also bigger and more unwieldy. Ibsen’s beast-of-a-play was full of themes, but as a group, we couldn’t agree on which we would follow. Because no one held the vision of the show, it kept slipping away. One day it would feel like we found a path to follow and then inevitably one of us would come in the next day full of doubts. Its reputation for being “unperformable” was the only thing all of us liked the whole time—but trying to make something “unperformable” isn’t actually that practical or inspiring. However, because we’d already made the schedule and bought the tickets, we all kept showing up to rehearsal and made the piece. We lived by Brand’s credo, a battle cry for creation and our desire to work together: “All or nothing!” By sticking to this crazy plan, we proved that we could take that leap of faith needed to join in partnership. By spending so much time in each other’s communities we became family. I may not like every choice Aram, Roblin, or Jed make and they may not be my best friends, but there is no one I trust more in the studio. Their differences push me to make art I could never make alone.

The nature of our ensemble isn’t prescriptive, it’s specific. Nowadays we usually work with a director and a stage manager, but there are still some projects where we don’t. When Jed and I make things together in Providence without Aram or Roblin, it’s still Strange Attractor, as it is when we work with guest artists. When we work with the full company, we never follow the same pattern. We consider the material, the last time we worked in each community, and the opportunities present in each city; we imagine who we’ll be getting feedback from—because it’s different depending on where we are—and what kinds of activities will fuel our time outside of rehearsal. Our show about museum security guards was intentionally developed with more time in Philadelphia and our show about New England-old-money-Christmas is being developed only in Providence. Because we aren’t making work in one community, community has become another choice that informs the devising process. Each show demands its own development.

Over the past nearly five years of Strange Attractor’s existence, I’ve thought a lot about how we make work. As the de facto producer, I am often applying for grants and being asked to sum up who we are. I’ve gotten good at making it look like this ambitious experiment is a model we invented. The truth is, we are still figuring how to be a company. We are not incorporated, we have no set roles, we don’t always meet regularly. But we are undoubtedly an ensemble. We four anarchic artists with differing tastes and points of view come together time and again across the country to invent new universes because we are the people who drive each other crazy in all the right ways. 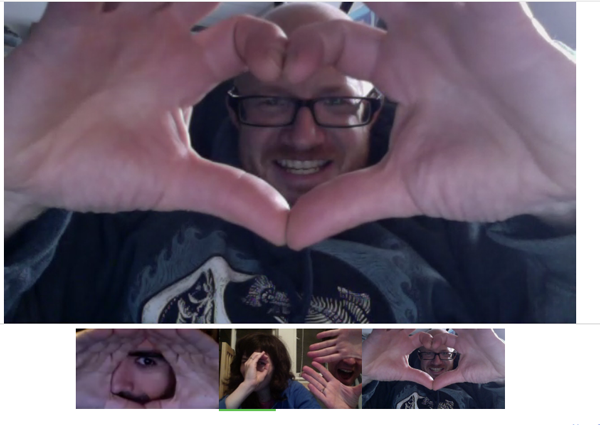 Rebecca—Thank you for a new description of "ensemble." I am currently working with a fabulous group of people at the Commonweal Theatre who "drive each other crazy in all the right ways."

I also applaud you for the courage in tackling Ibsen's BRAND and for taking on the "All or Nothing" creed as motivation. I had the privilege of playing that title character earlier this season at the Commonweal and it quickly became a career-defining production and performance for me. Prior to that production, I too may have called it impossible to stage. After the fact, I certainly do not have that impression.

Thanks for writing and best of fortune for the future.

Hey thanks for the comments! I love that you played the lead in Brand and would have loved to have seen the production. It is a beast -- and I suppose becomes more or less of one based on which translation you use? One of the big things we also learned during that process is that some ensembles are suited to making plays based on plays that are already written, but for us it was really difficult. Since then we've stuck with themes or scenarios we dream up and are staying away from already-made work. It's a funny thing to discover -- some of my favorite companies make work based on work, but for us it just lead to a world of confusion. . . Though when I reflect back on A Terrific Fire now, three years later, it was pretty neat. Like everything else, maybe there will come a time for us to try it again.

I'll check out Commonweal and see you around!

With Raymond Bobgan and Omar Kurdi

MENA artists continue to work hard to create representation in large theatrical arenas by pushing for their work to be produced on contemporary stages. However, since some major theatres only allot 1 or 2 slots a year for plays by BIPOC artists, and MENA artists have frequently been ignored. They have found other ways to create thriving artistic spaces for actors, directors, and playwrights alike. Masrah Cleveland Al Arabi has created a space for MENA artists to thrive. This artist-led organizational infrastructure serves as an example of how change can be made within existing theatrical structures. Today we are joined by Raymond Bobgan and Omar Kurdi.