A Prescription for My Stomachache

This week on HowlRound, we are exploring Native voices on the American stage. I have deemed this week: "Instead of Redface" (#InsteadOfRedface)—as our voices collectively question why redface is more prevalent on the American stage than our own authentic Native voices. For thousands of years, as Native storytellers, we have used more than words to tell our stories. Christopher K. Morgan's new work, Pohaku, incorporates Hawaiian chant, hula, contemporary dance, theatre, and storytelling to explore compelling universal themes in the story of Hawaii’s native people, including land loss and fractured identity. —Mary Kathryn Nagle

I’ve had an ache in my ‘ōpū (stomach) for as long as I can remember. Growing up in Southern California—where my parents settled after being stationed there while in the Marines—I didn’t realize that this ache had to do with Hawai’i, where my parents are originally from. I wasn’t born in Hawai’i, yet I had the good fortune to grow up with it all around me. My family would travel to the islands to visit grandparents and extended family, who would in turn come visit us on “the mainland." Hawaiian music played in our home, allowing me to envision the places in these songs...Waikiki, Kealakekua Bay, Makiki, the Ko'olau mountains. My parents grew up in a time when the Native culture was being suppressed, so neither one speaks Hawaiian fluently, but the language still rang through our home. They would tell me to do things in Hawaiian: go 'au'au (bathe), come kaukau (eat), or time for moe (sleep). I remember laughing when my older sisters taught me the Hawaiian word for having sleep in my eyes (maka piapia), and telling me not to be ni'ele (nosy) if I was getting too involved in their business. The islands where my parents came from influenced our meals; I spent a good part of my childhood learning to like the sour tasting poi served at family gatherings—of course I love it now.

It wasn’t until I was an adult, until I had lived a bit of my life and traveled a fair part of the world, that I could name that ache in my belly. I didn't want to imagine places I heard about in the Hawaiian music; I wanted to be there. I didn't want to speak just a few Hawaiian words; I wanted to hold conversations in Hawaiian. And I definitely didn't want to bathe in a bathtub in our Orange County home; I wanted to 'au'au in the warm, shallow waters of the Pacific Ocean just outside my Aunty’s house on Moloka'i. The ache in my belly was for the place that my people come from; I ached to be in Hawai’i.

Connection to ancestral land runs deep, it is in one's blood. And even when one’s tie to that place is severed, the connection remains. An acquaintance of mine who is a member of the Cherokee Nation told me she doesn't feel at home in Oklahoma where she grew up and where her family still lives, a sentiment I understand all too well. But when she first visited the hills of Georgia where her people had originally come from, she felt at home. I feel the same way about Hawai’i. The path of my life has unfolded in a way that does not yet have me living there, but every time I fly into Hawai’i, the song At Home in the Islands by the Cazimero Brothers plays in my head. And every time I leave Hawai'i, a bitter taste fills my mouth, that comes from the longstanding ache in my 'ōpū.

The ache also comes from the clash of cultures I feel within me as a Hapa-Haole. I remember watching my skin turn brown in the California summer sun as a kid playing outside all day, and comparing it to the sunblock protected skin of my friends. I wondered what it would be like to be white. At times I wanted to be white, and I was part white! My father’s Irish/Scottish surname, Morgan, was as “white” as I could hope for. But somehow, despite having both identities within me, a feeling of disconnection and otherness was always present. Even as the melting pot of our world deepens, to this day people are surprised when I tell them the “United Nations” gathering that lives in my blood stream. I am a little less than half Hawaiian, part Japanese, part Chinese, part German, part Irish. So many different ethnicities! How does one reconcile all these different parts? And how do I reconcile that one part of my identity is in some ways responsible for the subjugation of another part of my identity?

It wasn’t until I was an adult, until I had lived a bit of my life and traveled a fair part of the world, that I could name that ache in my belly. I didn't want to imagine places I heard about in the Hawaiian music; I wanted to be there. I didn't want to speak just a few Hawaiian words; I wanted to hold conversations in Hawaiian.

These questions and that ache inform who I am now, and the work I make as a choreographer. Artists often create from ache. My ache is like that of many other Native artists: an ache of loss, otherness, displacement, distance, and separation. The results of colonialism are in my blood, blood that has been politicized and come to mean more than just who I am, but also, what I am (or in my case am not) entitled to. Within this ache are themes that we can all (Native or not, artist or not), identify with. 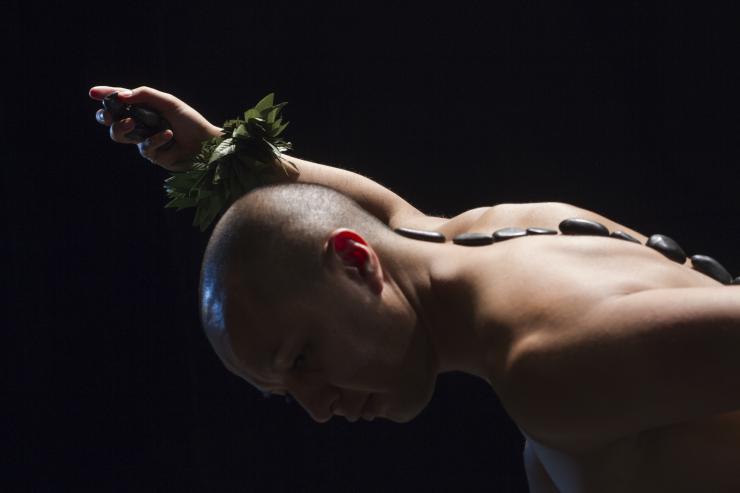 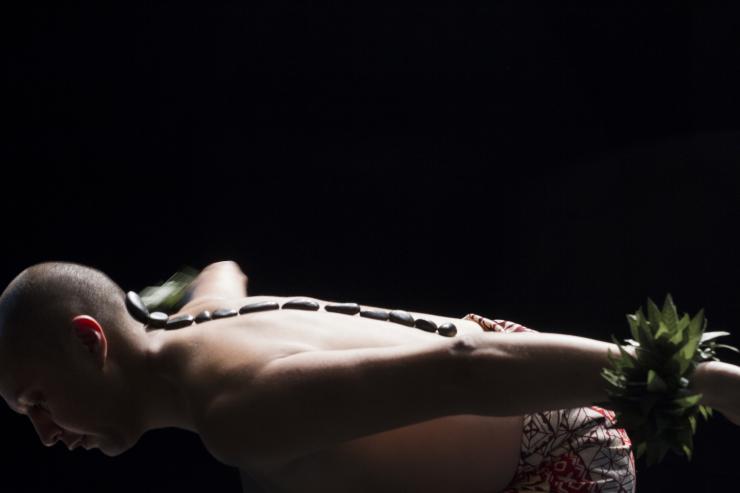 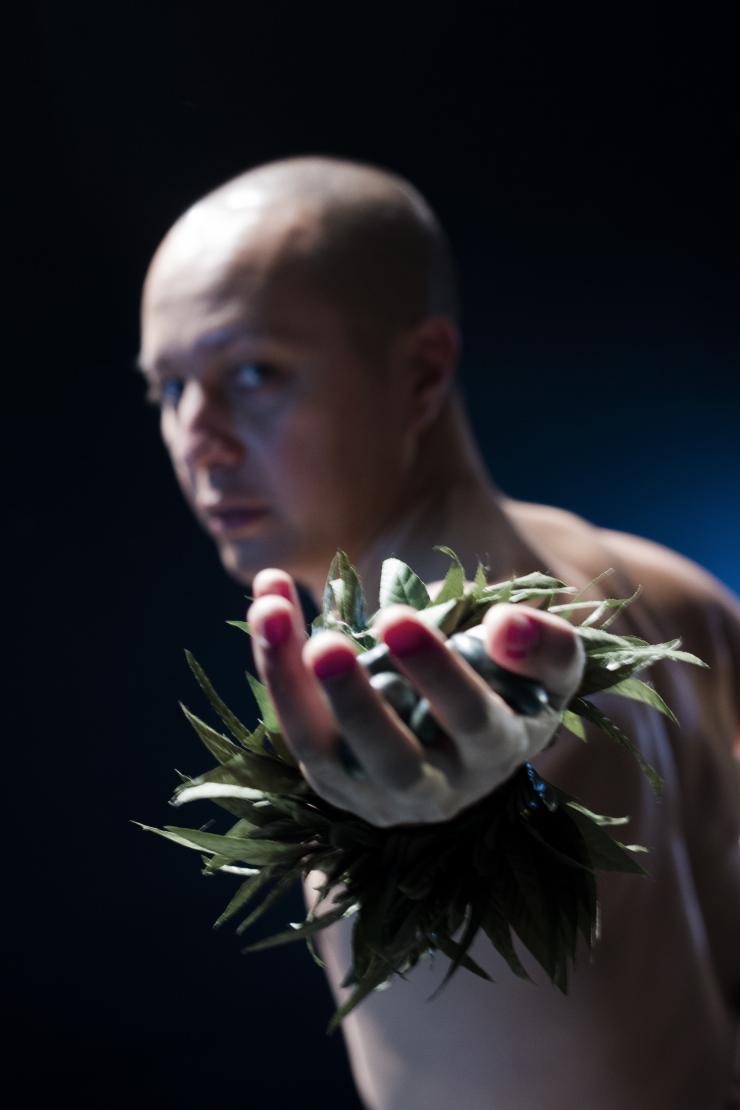 I’m in the process of a creating a new piece. Pohaku is the first dance piece I have made that will integrate traditional hula and chant with modern dance and storytelling. Hula is also in my blood, and how I first began to dance as a child. Modern and contemporary dance is where I found myself as an artist, and the field in which I’ve spent the last twenty years. Yet as much as both of these two forms reside within me, the creation of this work is asking me to integrate what can feel like clashing cultures. This integration effort mirrors my hapa self, and reflects struggles our society faces today. The creative process has brought up question after question for me. How do we integrate our cultural differences, while honoring their origins? When systemic racism and injustice continue, how can we achieve equality and balance? Do Native values fit in the modern world? Can these values actually teach us about living in this world? Perhaps there is much to learn from these values, and these struggles. Mary Kathryn’s words resonate, “It means you have to tell your story.” And in a richly diverse community such as the United States, sharing the lesser-known stories that reflect so much of our collective struggles is a critical part of a dialogue we must all engage in. We all know ache. Can our art be part of the process of soothing it?

Photos of Christopher K. Morgan in Pohaku by Sareen Hairabedian.

What Our New Plays Really Look Like
Marshall
Botvinick
Essay

Marshall Botvinick shares the results of the research he undertook about new plays premiering across the United States in the 2019–20 season: who is being produced, what characters are appearing on stage, and what forms and themes are common.