Site-specific Theatre and the Politics of Public and Private Space

Approaching an unaddressed house at 10:00pm on a foggy Seattle night, I felt the same flailing thrill of stepping off a curb that I’d felt six months earlier at a community garden in Brooklyn. It’s a sense of griplessness I get in social situations with unfamiliar rules, but it’s unusual for me to feel it going to the theatre—a space in which, as Richard Schechner notes in Environmental Theater, the rules of behavior are usually well regulated and strict.

To be precise, in neither of these cases was I going to a theatre. In August 2014, I was headed to the Garden of Hope, where Nora Sørena Casey’s Absolutely Somewhere was performed as part of Communal Spaces: A Garden Play Festival. The project, conceived and produced by Lillian Meredith, is in its fourth year and included eight plays in four community gardens in Brooklyn and Bed-Stuy. And in January 2015, I attended Four Story House, a project conceived and directed by Antoinette Bianco, produced by Erin Bednarz, featuring plays by Maddie Downes, Spike Friedman, John Leith, and Antoinette Bianco, and set in a private home. 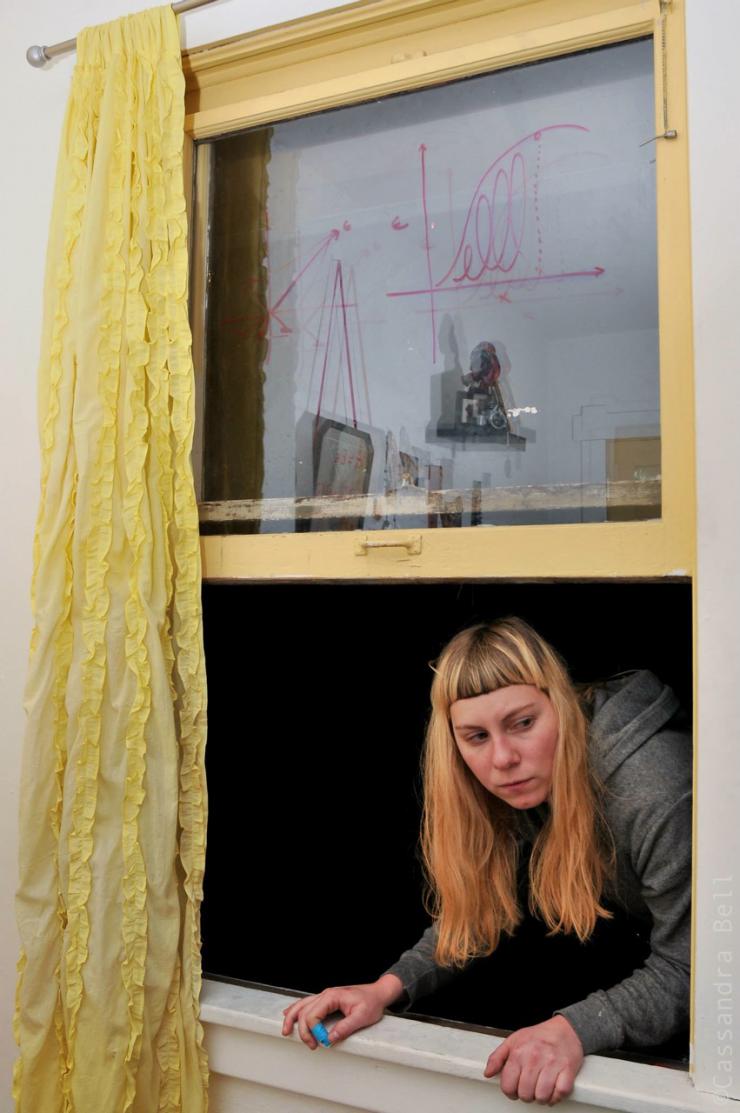 The decorum of what Schechner terms “orthodox theatre-going” is rooted partly in the defining significance that it assigns to the proscenium arch separating performers and spectators. This arch, which so sternly delineates the roles of watcher and watched, provides a measure of anonymity to audiences and enforces the stage as the sole arena of action.

It’s useful to note that the proscenium is of relatively recent advent. Eighteenth-century theatres were customarily raucous, with audience members climbing onto stages, interrupting speeches, and fondling the actors. Scholar Elizabeth Maddock Dillon associates this riotous, participatory theatre with two phenomena in England: the rise of democracy and the privatization of lands formerly held in trust for public usage. As capitalist enclosures sprang up, evicting un-propertied people from traditional spaces of assembly, theatres represented an alternative space of unconstrained social congregation—and politics a new stage on which to achieve representational force.

However, as theatres began to shift in the eighteenth and nineteenth centuries from models of aristocratic patronage to supporting themselves through ticket sales, middle class notions of propriety began to enforce more passive and orderly audience behavior. The proscenium arch rose up between performers and spectators, enclosing the space of the theatre just as fences had enclosed public land a century earlier.

By the middle of the twentieth century, however, artists and activists began, on many fronts, to reclaim both the theatre and the streets as public spaces. Richard Schechner argues that the American prototype for site-specific performances in found spaces was “the protest march or demonstration.” Discussing the aesthetics of the civil rights era, Schechner observes,

The sit-ins explored small indoor spaces; the freedom rides had claimed the interior of buses…the ultimate gesture was the march of thousands in the streets and across miles of highway. The land was proclaimed open…[Streets became] public arenas, testing grounds, theatres over which morality plays were acted out.

“The land was proclaimed open”—and the theatre followed, in part through an interrogation of the proscenium arch and its attendant protocol. By insisting on an “environmental” approach to theatre, in which the theatre space itself is an “active player in complex systems of transformation,” avant-garde theatre artists of the 1960s and 1970s partially revived the open and interactive theatrical dynamic of the eighteenth century.

The disorientation I felt arriving at Absolutely Somewhere and Four Story House had to do with not knowing the rules, but also with the communal, complex, and multivalent dynamics of the pieces. The unpredictability of the interactions among performers, spectators, and the environment—like the unpredictability of a protest or occupation—led to a different kind of disorientation. I didn’t know where the walls were, particularly the fourth.

Both projects were characterized, furthermore, by a signal crossing of the boundary between public and private. In Four Story House, Bianco and her roommates invited us into their private home. And though invited, being strangers, we retained a trace of the trespasser. Conversely, for Communal Spaces, we gathered in a community garden in broad daylight while outside the garden gate neighborhood kids perched on their skateboards and peered through the bars, watching us watching. We, the audience, were in public. Our anonymity was trespassed. 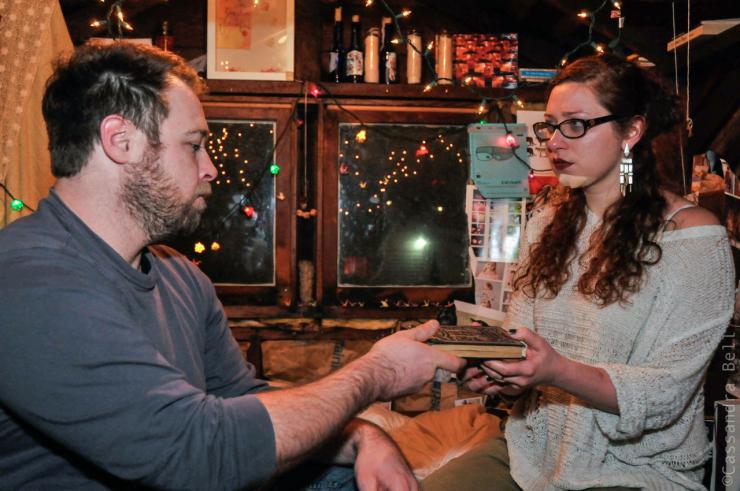 Both projects enabled the formation of real and immediate communities of artists and audience members. Both also explored broader issues of community and the politics of public and private space. Bianco writes that she “wanted to create a space where both the characters and the audience were forced to deal with our ideas of privacy and the different spaces we create and walls we put up for ourselves.” This exploration of isolation and intimacy was enriched by the setting’s accentuation of the latent voyeurism in theatregoing.

Whereas the formality and scripted nature of most orthodox theatre allows me to forget or ignore the ambiguous line between spectator and voyeur, Four Story House’s intimacy—in the sense of proximity, given the close quarters; exclusivity, given the limited audience; and sexuality, given that all four plays probed facets of erotic attachment—most decidedly did not. I was aware of myself watching. And I liked it—though I was also uncomfortably reminded of my own relationship with technology. For I too invite a guest into my home (or car) when I’m lost, alone, or interested in engaging a broader community—Google. I do so knowing intimacy’s price: that I am observed and recorded. In this way, Four Story House gestures toward a new kind of enclosure—the capitalist appropriation of our mental spaces.

Whereas Four Story House invited its audience into a private (four story) house, Communal Spaces invited its audiences into communal spaces—i.e., public spaces nestled in and pertaining to particular communities even before the addition of “the communities that came to see” the performances. In doing so, the project dramatized the tensions inherent in art’s participation in the process of gentrification.

Sitting in a garden on a Saturday afternoon, observed with a measure of skepticism by the neighborhood kids who might normally have been playing in the neighborhood garden, I was suddenly conscious of the class dynamics of theatregoing. I was conscious—as I rarely have been in an orthodox theatre space—of the way in which the powerful communities that theatre can create among artists and audiences are not all-inclusive. They rather belong to the people who are present—not to those who for whatever reason cannot be.

This realization, this complex feeling of attachment, rootedness, fascination, and guilt, was precipitated in part by Nora Sørena Casey’s lovely play, gracefully directed by Will Dagger. Absolutely Somewhere used the garden’s narrowness and mirrored benches evocatively rather than literally, allowing the setting to shift from a subway train car to a home office to an entry hall to, at last, a garden. It was this evocativeness that allowed me to come to terms with my self-consciousness and to celebrate the aliveness of both the performance and the environment in which it was set; to savor the discomfiting potential of the public arena, and to value the community garden for what it might be rather than was: a free space and common ground.

Photo 3: From Four Story House: Carol Thompson in Montreal by John Leith; Alex Matthews and Kaillee Coleman inUntitled 1 by Antoinette Bianco; Andre Nelson and Alex Highsmith in Quarantine by Spike Friedman; and Skylar Tatro in Theory of Elasticity (Or, Brainfreeze) by Maddie Downes

After the Avant-Garde
Most Discussed
Everything Everywhere: Perspectives from “Third-Culture” Theatremakers in the Sinophone Community
Livian Yeh
Most Watched
Puppets in the Green Mountains 2022
Saturday 10 September - Sunday 18 September 2022
Upcoming
Livestreaming a Conversation: Animating Democracy Session One
Wednesday 28 September 2022
Newest First

Great piece! I am particularly interested in the last bit, where you describe the neighborhood kids watching the people watching the performance. Is this a problem? Have those who are interested in site-specific or roving performances (I'm one of them: http://howlround.com/toward... ) traded one exclusive theater space for another? Are pieces like this performance a kind of gentrification or invasive cultural tourism? How could the performance you saw have better welcomed or included those neighborhood kids? Or is that not possible or not the point?

This topic interests me. I'm an "emerging" playwright. I've written a play, OCTOBER, that is site-specific, interactive, and takes place, as written now, partly in a library, partly outdoors, in a public park. As the question has been posed, what are the legal ramifications of creating theater in a non-theater environment? And, how does an individual, like me, who is not working with a theater, handle this issue?

As the owner and manager of a small theater, toying with the idea of doing it in other kinds of spaces, this question comes up for me - how do you handle liability issues? If an audience member or performer or techie gets hurt in a performance in someone's home or in a public space, who gets sued? You, the producer? The owners of the home? I have never had anyone hurt at one of my shows, but those things happen. What are the legal ramifications of doing theater in untraditional spaces?

Good question. I wrote a play for The Foundry Theatre in 2008, called Open House, which was performed in 24 NYC apartments. The Foundry had a simple liability agreement with hosts, and we only performed in homes that seemed safe. And then the producer found a temporary policy, akin to what you'd get if you rented a theater space. Totally surmountable!

Excellent. I'm giving up my theater space this summer (rent is too high) and love the idea of doing site-specific work that involves the community. This is a favorite daydream of mine right now.

this is an archive and download for our show - some decent info about producing in homes: openhouseremix dot org.

I am at the starting stages of building a site-specific theatre group/company. This comment and this article have been incredibly helpful.

In the first episode of PUHA (Performative Unity in the Hungarian Arts) podcast, co-hosts Zsófi and Bíborka, along with their guests, search for the meaning of the notion of “public space.” Through the experiences and experiments of interdisciplinary sound artist Dávid Somló; choreographer Flóra Eszter Sarlós; dancer and choreographer Gyula Cserepes; and theatremaker and performer Sarah Günther, this episode will take you on a tour of spaces, from Budapest to Denmark to London and more!