A Can of Iced Tea & a Bag of Skittles, or a White Disco Suit Against Handguns | HowlRound Theatre Commons Skip to main content

A Can of Iced Tea & a Bag of Skittles, or a White Disco Suit Against Handguns 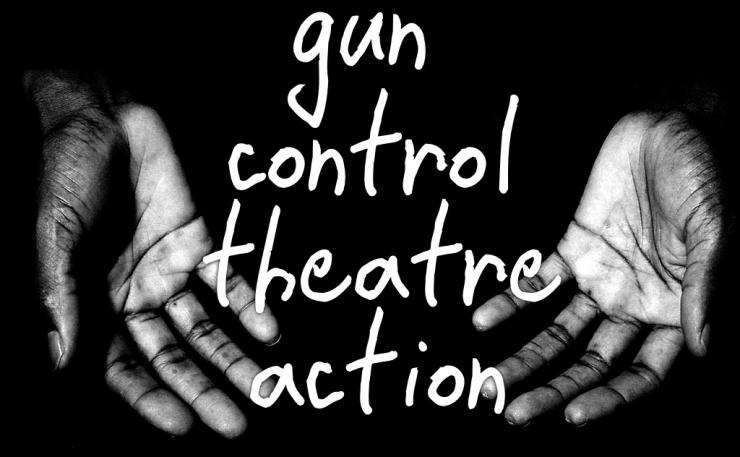 I had offered to host Caridad Svich’s Gun Control Theatre Action in New York City after the project—which coincided with the March on Washington for Gun Control—had successfully concluded in Washington, D.C. I think the general public was fairly optimistic about Congress passing a gun control bill then. On April 17, in the middle of planning for the April 29 event at New Dramatists, Congress voted down the bill. I don’t think it was ever our collective intention to convert nonbelievers of gun control or to influence policy making. For me, the event was an opportunity to express our shared concern, shared among both the artists and the audiences. Nineteen plays were read by eleven actors, directed by John Moletress. The evening was affirming despite the unbelievably bad news we had received ten days prior.

On July 14, I woke up to the news that George Zimmerman was found “not guilty” of Trayvon Martin’s murder. Zimmerman can travel to your state with his gun in the future—like tomorrow—if you live in the states of AL, AR. AK, CO, DE, GA, ID, NH, NM, NC, SD, TN, UT, VT, VA, WA, WV, or WY.  He is allowed to keep the gun he used to kill Trayvon, and there is nothing that prevents him from using it against another African American teenager with a suspicious can of iced tea and a dangerous bag of Skittles purchased at a 7-Eleven. In his home state, Florida, he needs no permit to purchase more handguns, or shotguns, or rifles, and he already has a carrying permit. If he was a convicted felon, he may or may not have difficulty acquiring more weapons tomorrow, but we all know that he isn’t. Convicted. We can debate Zimmerman’s ethnicity until we are blue in the face, but it would not make a difference in the hierarchy of color that influenced his murder trial. If he were Asian, I would have believed the same.

When the “not guilty” verdict for Zimmerman was announced, my heart sank. It brought back a painful old memory. Nearly twenty years ago, on May 23, 1993, a “not guilty” verdict for manslaughter was declared for Rodney Peairs who blasted away a sixteen-year-old exchange student from Japan with his .44-caliber Magnum revolver at point blank. The previous year on October 17, Yoshiro Hattori, dressed up as John Travolta in Saturday Night Fever to go to a Halloween party, was dropped off at the wrong address in Baton Rouge.  Peairs found this youth in a white three-piece suit fatally threatening and defended himself and his family. By the time this tragedy occurred, more than fifteen years had passed since I had come here as an exchange student, and I considered the U.S. my home. This verdict broke my heart.

I don’t know if there is any impact we can make as theater artists to prevent tragedies like his in the future. In fact, I am doubtful that theater can “change the world” as we often like to say. Still, we all have to do something.

After Zimmerman was acquitted, I looked up Yoshiro’s case. I didn’t remember his name, but it was easy to find. I was shocked to realize that I had forgotten that a white boy—another sixteen-year-old—was also there in Peairs’s front yard. The article in The Advocate states that the two boys were leaving when Peairs opened the door and shouted “Freeze.” Yoshiro danced toward the gun pointed at him. This must have seemed an unreasonable behavior to nearly everyone who paid attention to this particular news back then. It gave the jury just enough room to ask, “Why did he do this if he didn’t have any malicious intention?”

If you spent the first fifteen years of your life in Japan—like Yoshiro and I did— it is beyond your sixteen-year-old imagination that someone would pull a trigger and shoot you for knocking on a wrong door. You would not have even seen a real gun once in your life. Ordinary citizens do not own guns and shoot each other there. But if you spent those formative years in a place where no effective gun control laws existed, you would be wiser. Hence, the wise jury was able to rewrite Yoshiro’s last teen dance and his dialogue, “We’re here for the party!” as a menacing act against the thirty-one-year-old white man. The jury used Louisiana’s “shoot the burglar” law to acquit Peairs. Peairs did not shoot the white boy who was with Yoshiro. The case would have been much more complicated if he had.

But the acquittal of Yoshiro’s killer happened twenty years ago. Why am I not more surprised by the “not guilty” verdict for Trayvon Martin’s killer today? Actually, I know why. I’ve lived decades as an American in the land where 13% of the population is African American yet they make up 37% of the prison population, and where the lawmakers cower before a small group of gun worshippers instead of doing the job we elected them to do—such as fixing the justice system and regulating gun sales. I’ve gotten used to hearing about random shootings, mass killings, and homicides of family members using the guns that are available in their houses. I no longer possess the innocence of a sixteen-year-old, dancing toward a man whose Halloween costume is a gun-toting murderer.

Even so, my heart aches for Trayvon Martin’s lost future. I don’t know if there is any impact we can make as theater artists to prevent tragedies like his in the future. In fact, I am doubtful that theater can “change the world” as we often like to say. Still, we all have to do something. I admire Caridad Svich for the enormous work she has done in starting the Gun Control Theatre Action movement and having brought together a group of dedicated theater artists who continue to try to keep the issue alive using theater, despite the unbelievably bad news we received on July 14.

THANK YOU FOR NOT BEING AFRAID TO TALK ABOUT RACE AND GUN VIOLENCE. YOU HAVE HONORED YOSHIRO BY REMEMBERING HIM AND BY ALLOWING US TO KNOW OF HIM AND HIS STORY. I AM CHANGED TODAY BECAUSE OF IT.

Thank you for sharing your truth.

silence is consent. each one of us must do something and yes i do believe that people can 'change the world' through the mediums in which they work.