A Case for Casting Teens

About a year ago I started working at Mixed Blood as the NNPN (National New Play Network) Producer-in-Residence. While there, I've been privy to and part of ongoing conversations about what it means to produce theatre by, for, and with various communities.

I believe there is an important national dialogue happening about what it is to be loyal and authentic in casting, one that Mixed Blood takes great care to participate in; for example, Mixed Blood recently launched a Disability Visibility initiative to further the conversation.

Before coming to Mixed Blood, I spent three years as an eighth grade English and Drama teacher. You can imagine my terror when I found out that Teach for America had assigned me to teach middle school. However, I was pleasantly surprised—my students often exceeded my expectations and made me aware of how easy it is to underestimate young peoples’ potential, maturity, and talent.

During these years teaching, I also attended, assisted, and directed at theatres for adult audiences. Given the juxtaposition of my experiences, I became increasingly aware of how uncommon it is for theatres, other than those specifically aimed at children, to actually cast teens in teenage roles.

Of course, there are many obvious reasons why: Equity houses need to meet quotas, many teens are involved in their high school drama programs, they're often unavailable to rehearse during the day, dealing with their parents poses a potential nightmare, working actors need opportunities for employment, and well, they're teens.

So, I tried an experiment. I decided to independently produce Lauren Gunderson's I and You and cast two teens in what I believe to be the first professional production featuring two real-life sixteen-year-olds in this eighty-minute two hander.

We found time to rehearse in the late afternoons and evenings. I provided them with their scripts well in advance, and communicated with their gracious parents regularly. The experience, it turns out, was overwhelmingly positive.

We found time to rehearse in the late afternoons and evenings. I provided them with their scripts well in advance, and communicated with their gracious parents regularly. The experience, it turns out, was overwhelmingly positive.

And so I write a case to producers and directors to consider casting teens, when feasible, in age appropriate roles. In keeping with the teenage theme, you'll find the takeaways organized in a Buzzfeed-like Top 5 listicle:

1) They will bring authenticity to the roles in ways you're unable to dream.

Their daily, lived experiences provide instant relatability and context. And even an actor with the best physical training would be hard pressed to beat the natural gangliness of their bodies.

2) It's an untapped pool of legitimate talent.

Some teens may be seasoned performers from shows at the local children's theatres, while others may surprise you with their natural talent. More than forty young actors enthusiastically responded to the call I put out for I and You; the majority of these young performers’ natural instincts and stage presence blew me away. 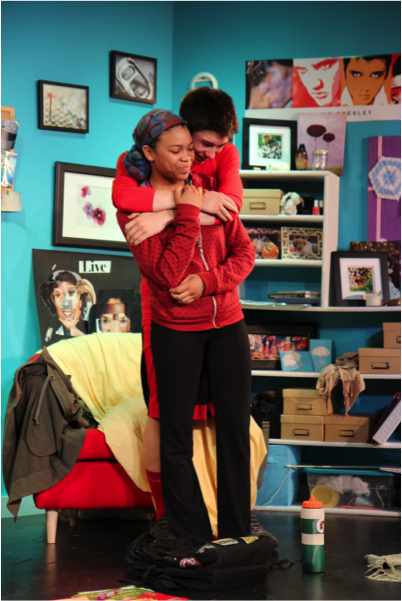 3) It serves as an effective means of audience outreach—cast one teen and their entire group of friends will attend.

While you may need to remind them to leave the signs and balloons at the door, you are guaranteed an enthusiastic, dedicated audience comprised of proud friends and family that will also likely spread the word on behalf of the production. By exposing the young friends to theatre, you're also building a new generation of theatregoers.

4) It allows us to invest in a new generation of professional actors.

Since they were treated as such (we followed the AEA rulebook and compensated them equitably for their work), they behaved professionally. The young actors were eager, rose to the occasion, and were quick to learn. Both performers have emerged from the experience wanting to pursue theatre as their careers beyond graduation.

5) It provides the opportunity to become a mentor.

We all have had mentors in the field. Being able to serve as one for another young artist is a powerful experience.

My reflections are based on a small sample size and, of course, Theatres for Young Audiences are already aware of the myriad benefits of incorporating teens. Yet, as someone who primarily works in theatre for older audiences, I have now been converted to seek out teenage actors when feasible and when the casting calls for it.