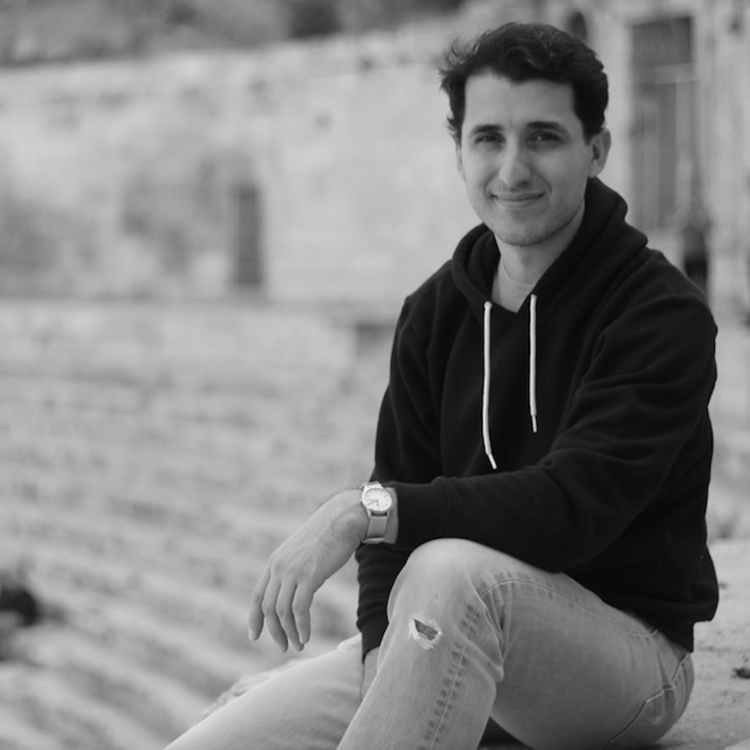 The Charmed Life of Rezo Gabriadze

Every great world capital has its national theatre, the thing that’s first listed on the “culture” section of a tourist’s guidebook. London has the National; Paris the Comédie-Française. In New York, for better and for worse, it’s the Broadway–industrial complex. But look to your Lonely Planet guidebook for Tbilisi, Georgia—a cultural capital on the rise—and the first entry, and indeed the most popular tourist destination, is not a gigantic institution with a multi-theatre facility or even a purveyor of glitz and spectacle. The hardest ticket to get in Tbilisi is for a marionette show at the Gabriadze. And the ticket price? About ten dollars.

The existence of the Rezo Gabriadze Theatre stretches the imagination of this jaded New York thespian. The preeminent arts institution of the country is a custom-built seventy-seat theatre with wooden risers that produces original marionette shows in repertory, written and designed by one man, who also designed the building itself.

The man is Rezo Gabriadze, who has led an enviable, vibrant life that greatly influenced the culture of the post-Soviet bloc. Born in the small Georgian city of Kutaisi, he became a successful screenwriter in Soviet cinema; one of his more influential films was 1986’s Kin-Dza-Dza, the “Star Wars of the USSR,” but with more of a debt owed to Ionesco than Flash Gordon. However, in 1981, at the age of forty-five, Gabriadze made the snap decision to stop splitting time between Moscow and Tbilisi and to start a marionette theatre in his home country. He had never touched a marionette in his life, but thought the medium would be the best way to explore the limits of his imagination while also evading censors.

In what has become an incredible second act, he has succeeded wildly. The theatre has grown from a basement operation into an institution with an attached café/restaurant. The shows have toured the world, most recently making it to the United States in 2015 to perform in the Lincoln Center Festival to rave reviews. Rezo himself has received international acclaim, including being named a Commander in the French Ordre des Arts et des Lettres.

A visit to the theatre is the best way to discover Gabriadze. The building is hard to miss: after cutting through the alleyways of Old Tbilisi, the path opens up to a courtyard dominated by a four-story-tall clocktower. The tower looks like it came out of a book illustrated by a tag-team of Paul O. Zelinsky and Dr. Seuss: twisted and off-kilter, and covered in a mosaic of tiles. Passersby lucky enough to come at the top of the hour receive an indication of what lies inside, as a marionette angel emerges from the clock face to ring in the hour. Close inspection of the entire building reveals more fine, considered details like irregular masonry and zig-zagging chimneys. Walk past the bustling café and a sign at the base of the clocktower marked “TICKETS” points to a basement window, low enough that you have to bend down to your knees to look inside.

To get in the theatre, audience members enter through a basement stair under the clocktower, pass a simply appointed lobby, and go up another staircase. The space is shockingly small, closer to a downtown black-box than its international reputation suggests. It’s all wood, painted a soft azure. To pack in audiences, the house staff supplements the house seating with wooden folding chairs in the aisles. Despite the simplicity, the same whimsical sensibility displayed in the facade remains: a giant wooden cell phone with an axe stuck in it hangs above the front row, admonishing the audience to silence theirs.

Once the lights go down, focus is brought to the stage itself, small and bare and pitch-dark. It is surprisingly deep and precision-lit; puppeteers appear and disappear out of the inky black upstage to make their entrances. At the start of Ramona, a more recent work, a train snakes its way out of the darkness, small so as to appear miles away, winding its way around a mountain of canvas and string.

The hardest ticket to get in Tbilisi is for a marionette show at the Gabriadze. And the ticket price? About ten dollars.

Marionette is an otherworldly form. Light transforms into a miasma that breathes life into the wooden things swimming through it. The strings and sticks and the performers behind them don’t ruin the effect but enhance it. Marionettes, like us, look small and weak, moved by the hands of destiny and swept inexorably toward their fates.

Rezo’s work leans into this world of symbols and shape-shifting. His scripts still contain a cultivated use of metaphor to hide any direct references to the powers-at-be, but it’s pretty easy to see the social criticisms within the allegory. Ramona follows the long-distance romance of two train engines: a freight engine carrying cargo across the Trans-Siberian Railroad and the eponymous shunter engine forced to shuttle train cars about the Tbilisi railway station. The chief villain is the train station manager, a specter of Soviet-era bureaucracy, who supervises Ramona and will not let her leave the station. However, when a circus train breaks down, Ramona rebels, leaving to help move the circus out of the city. The circus managers, seeing an opportunity from Ramona’s generosity, ask her to join them as a trapeze artist. Ramona’s career as an engine/acrobat leads to a predictably tragic demise, which subverts the message one would expect; while we would like a tale to tell us that true love and good intentions can not be held in by the oppressive state, the reality is that acting against what is expected of us carries its own risks, sometimes catastrophic.

Beyond the script, one of the chief pleasures of the performance is seeing Rezo’s imagination at play. His work is rustic in aesthetic, poetic in sensibility, and innovative in design. A pig and a hen argue about local politics. The station manager, outsize in the tiny cart he rides about, wields a hammer like a weapon, beating the stage to drive his point home. When Ramona thinks of her distant lover, he appears and calls out to her as if from the end of a long tunnel, portrayed as fog light beaming from the dark upstage. Perhaps the most indulgent element—but also the most pleasurable—is a parade of circus acts. It doesn’t move the plot forward at all, but we are treated to one brilliant marionette after another: trapeze artists, dancing horses, tigers, ballerinas—all completely different and ingeniously designed. It’s impossible not to delight at the creativity.

Leaving the theatre, my mind was boggled by what I had just experienced: a gorgeous, world-class production in an intimate setting that didn’t cost me my shirt. I’m embarrassed to admit to running numbers in my head, trying to get an idea of where the money comes from. The answer, of course, is government subsidy. The theatre, like most in the post-Soviet space, is state-owned and run by the Ministry of Culture. (Even more mind-bogglingly, there was no charitable-giving tax write-off in the Georgian tax code until 2011. This made funding very difficult for organizations without already established cultural and political clout.)

However, you won’t find much criticism from Georgians about the expense. In fact, it’s hard to find anyone with a bad word for Gabriadze, in Georgia or internationally. Whenever you hear the theatre’s name, it’s usually enhanced with “national treasure.” While I’m not sure how often Georgians are attending performances at the Gabriadze (anecdotally, the audiences on the nights I attended were primarily Russian-speaking tourists), when you consider the bustle of foot traffic, street vendors, and sidewalk cafes immediately surrounding the theatre after a sold-out performance, you can’t deny that it is a vital nerve center in the Tbilisi economy.

Is there an artist in the United States with a singular voice and held in such esteem that they could run a theatre company to support the total execution of their vision?

At the age of eight-two, Rezo is no young man. His son, Levan, has taken over as artistic director and producer, while also maintaining a career as a film director, but there is no succession plan; no work by any other artist is put up at the Gabriadze. The theatre doesn’t even have an apprentice program, as it would be a distraction from Rezo’s singular focus on his own creations. While there are plenty of companies built on replicating the works of deceased artists, it is disheartening to see the shortsightedness of this lack of knowledge transfer.

Is there an artist in the United States with a singular voice and held in such esteem that they could run a theatre company to support the total execution of their vision? In our ecosystem, that seems all but impossible for a variety of reasons, chiefly the lack of state support. The sheer administrative costs needed to run a theatre company in the United States, along with the struggle of supporting oneself as an artist, probably precludes someone from running a company and maintaining a vital artistic practice.

The exception that ultimately proved the rule was likely Young Jean Lee’s Theater Company in New York. Lee’s uncompromising vision was enhanced and reinforced by the fact that she took full administrative control over the production of her work. However, once Lee made a big enough name for herself, she didn’t seek to rent a building; she dissolved the company. This has undoubtedly paid off, as this past summer Lee became the first female Asian-American playwright to have a play open on Broadway. (That being said, if someone wanted her to run the National Theatre of the United States, I would be a season subscriber every year.)

In some ways, the Gabriadze’s total commitment to an expression of an artist’s sole vision is reminiscent of a very different American artist and his gesamtkunstwerk facility/experience: Walt Disney. You can say many things about Disney World, but you can’t say that every choice hasn’t been considered. The same goes for the Gabriadze. The performances are written and directed by Rezo. The marionettes are designed by Rezo. The stage was personally designed by Rezo. Every tile in the clocktower was hand-painted by Rezo. The tables in the café are painted with caricatures by Rezo. Every part of the experience at Gabriadze is mediated by the singular mind of one artist.

The Gabriadze presents a business model for a theatre that’s extremely rare in the United States: family-run and state-supported; custom-designed but affordable and intimate; quirky yet widely celebrated. All of these attributes seem to contradict, but the person at the center—a brilliant artist at home in his contradictions and willing to live in them—brings it all together. If you are lucky, when you go, you’ll see him at his café with a pad and crayons, lost in his work in a room of his own design, drawing and dreaming up his next story.

And while you’re there, get the doughnuts. They are an aesthetic experience unto themselves.