Cripping the Crip—Is It Time to Reclaim Richard III?

Discussions of representation on our screens, theatres, and opera stages have taken center stage recently, particularly in arguments about lack of diversity in casting regarding cultural heritage, race, and gender identification. In the UK cross-gender casting has become mainstream with Phyllida Lloyd’s celebrated trilogy of Shakespeare plays set in a women’s prison, Maxine Peake’s 2015 Hamlet at the Manchester Royal Exchange, and Glenda Jackson winning Best Actress in last year’s Evening Standard Theatre Awards for her “magnificent” King Lear at London’s Old Vic. So far so good. Yet in the midst of all this welcome talk about diversity and parity, there is an area still overlooked: neuro-diversity and atypical embodiment—and the actors who portray characters with disabilities.

In 2002, Graeae Theatre Company commissioned me to write peeling, a metatheatrical satire on our industry’s relationship to disability, for one Deaf and two disabled female actors. At a point in the play when discussing the Academy Awards, one of the characters rolls her eyes at nondisabled actors being wreathed in awards for impersonating someone like her, a woman with atypical embodiment, and says, “Cripping-up is the twenty-first century’s answer to blacking up.” The added sting is that she and her two companions are professional actors, but are never invited to audition like “real actors, for real plays.” Instead, they are part of the chorus, the “right-on ticks on an equal opportunities monitoring form,” left to languish in the shadows, stuck at the back of the stage behind the scenery when they are “off,” since the backstage dressing rooms are inaccessible.

[I]n the midst of all this welcome talk about diversity and parity, there is an area still overlooked: neuro-diversity and atypical embodiment—and the actors who portray characters with disabilities.

Sixteen years since peeling premiered, little seems to have changed.

The political and cultural strengths of casting disabled performers and utilizing the aesthetics of access have finally started to infiltrate the UK’s theatre scene, with initiatives like Ramps on the Moon, a collaborative network of six National Portfolio Organisations theatres embedding accessibility and inclusivity in the heart of their process and productions.

Further good news came in 2017 when Northern Broadside cast disabled icon Mat Fraser in their production of Richard III. This delighted me, not simply for the important decision to cast an actor with atypical embodiment in a leading role that is usually “cripped up,” but because as someone who has worked with Mat on various projects, I know that his talents have been mournfully underused. Here, finally, was an opportunity for him to reveal his considerable performance skills and take his place amongst the pantheon of celebrated (nondisabled) actors who have played Richard in the past. As Fraser’s performance was met with critical acclaim, I returned to the original text. The more I reflected on Shakespeare’s play and “his” Richard, the more I was struck by questions about physical difference and representation—questions which would not go away.

In “The Necessity of Diverse Voices in Theatre Regarding Disability and Difference,” I wrote about the necessity for diverse “voices” and bodies on our stages, and how, for millennia, disability has been used in the Western theatrical canon as a metaphor for the human condition. All too often physical difference represents considerably more than the sum of body parts, and never has it been more evident than with the epitome of evil—wickedness personified in the character of Richard III.

The more I reflected on Shakespeare’s play and 'his' Richard, the more I was struck by questions about physical difference and representation—questions which would not go away.

As Shakespeare’s villain schemes and murders his way to power, he represents perhaps the original “evil genius.” In act 1, scene 1 Shakespeare lays out clearly the cause and logic of Richard’s sociopathic behavior:

I that am rudely stamped…
Deformed, unfinished, sent before my time
Into this breathing world scarce half made up,
And that so lamely and unfashionable
That dogs bark at me as I halt by them…

He is “not shaped for sportive tricks/ Nor made to court an amorous looking-glass…” and so is deprived of “love’s majesty.”

And therefore, since I cannot prove a lover…
I am determined to prove a villain…

In contemporary drama, this thwarted, bitter, “twisted body, twisted mind” trope serves as a shortcut to character and narrative. According to theatre practitioner and disability performance scholar Victoria Anne Lewis in her essay The Dramaturgy of Disability, the stereotype of physical difference denoting evil is now so ingrained in the public imagination, that screenwriting manuals suggest rookie writers give their villains a limp or amputated limb as a way to instantly signify their dangerousness. Shakespeare’s efforts, of course, cannot and should not be aligned with such “hack” approaches, but nevertheless his “hideous… deformed, hobbling, hunchbacked cripple” (description from Thomas Ostermier’s production of Richard III) is murderous and depraved as a direct consequence of his physical impairment.

In 2016, speaking with The Guardian newspaper about his interpretation in the Schaubuhne/Barbican production, director Thomas Ostemier stressed the necessity of nondisabled actor Lars Eidinger amplifying Richard’s physical difference with a visibly fake hump, neck and teeth braces, a pronounced limp and an oversized shoe: “For Richard, his disability is part of his suffering, his destiny…” Cassidy Dawn Graves in HowlRound recently addressed Thomas Ostermeier’s production of Richard III and questioned this portrayal.

A similar tack was taken by Anthony Sher in his book The Year of the King, which documents his process of creating and performing Richard III for the RSC at Stratford in 1984. Conferring with his personal psychologist, Sher concluded Richard’s “wickedness” was an act of revenge directly linked to the lack of his mother’s love and the pain, self-loathing, and lack of a “sense of self” such withholding of affection creates.

This notion of disability or physical difference being embroiled in suffering is ubiquitous in our theatrical canon, and points, to a major misunderstanding. Although it occurs in a huge number of plays, seldom have the writers been disabled themselves, or written from that perspective, which might explain why theatrical depictions of disability differs so significantly from lived experience. Of course, there may be those who do feel they “suffer from” a particular condition, but the majority of people who identify culturally or politically as disabled don’t necessarily perceive themselves as “suffering” or being the victim of some kind of tragic misfortune. However, this equation of “suffering equals revenge” ignites dramatic deadwood, and has been widely used as a kind of psychological “truth.”

Which brings me back to the tragedy of Richard III and my concerns.

Mat Fraser’s casting as Richard III last year was a significant milestone in the struggle for parity and representation in our UK theatres. Yet, given how monstrous Shakespeare’s Richard is, and how far he deviates from historical accounts of the real monarch—is having a disabled actor play a distorted disabled part “enough”? It may create more diversity on stage, but what has been termed “authentic casting” does not challenge problematic underlying assumptions and negative associations of difference in the script.

It is of course absurd to expect Shakespeare to have a twenty-first century sensibility, and I am wary of political correctness, but engaging with Richard III has raised an important challenge for me: Given how I would never wish to bowdlerize classic texts, nor criticize them for failing to have current cultural and political perspectives, how might I as a theatremaker dialogue with these issues and Shakespeare’s magnificently malignant Richard III?

Is it time to reclaim Richard—and to recrip the crip?

richard iii redux OR Sara Beer is/not Richard III is a collaboration with disabled actor and activist Sara Beer and Phillip Zarrilli, director of The Llanarth Group. Our co-created performance is based on the following premise:

Richard III: Bogeyman. Villain. Evil incarnate. Or is he? What if he is she? What if the “bottled spider” is portrayed by someone funny, female, feminist, and with the same form of scoliosis? How might the story change, the body change, the acting change, and the character change when explored by a disabled actress with deadly comic timing? And how would previous nondisabled Richards measure up?

Richard III redux is not a performance of Shakespeare’s play. Rather, it is a roughing up, remixing, and revisitation of the problematic set of assumptions and premises on which Shakespeare (falsely) (mis)shaped his Richard as a “poisonous bunch-back’ed toad,” “deform’d, unfinish’d…villain.”

Our approach has involved historical research into the “real” Richard III, discovering a popular, reforming monarch, who was ferocious in battle, who led thousands of willing soldiers into conflict during the long War(s) of the Roses. Following the discovery of his skeleton in a car park in Leicester in 2013, we know he was indeed disabled, with a form of scoliosis, but he did not have the withered arm, limp, club foot and other physical deformities which have been layered onto his fictive body since the Elizabethan era.

History, we are told, is written by the victors—and it seems like the record of Richard III, the last of the Plantagenets, was besmirched by the commentators and documenters of the new Tudor royal house once Henry VII claimed the throne after the battle of Bosworth, where Richard was killed. Intriguingly, there is compelling evidence that Shakespeare’s creation of the monstrous Richard can be viewed as character assassination and Tudor propaganda, to please powerful patrons.

This demonizing fiction has been further magnified in contemporary “star vehicle” turns in which actors like Kevin Spacey, Anthony Sher, Al Pacino, and Lars Eidinger have distorted Richard’s body to make him even more repugnant. Their interpretations of the role, plus their colorful and often ingenious use of prosthetics have also come under the lens as we deconstruct this “othering.” 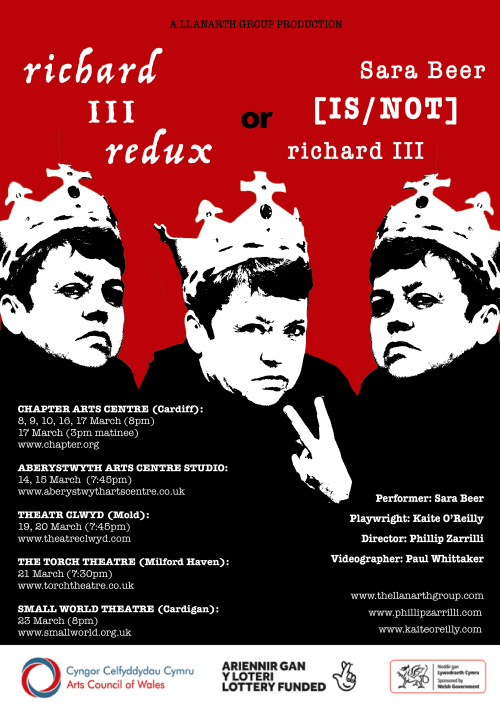 The performance is a one-woman show, a mosaic with several alternative lenses, voices, and roles through which Sara Beer’s richard iii is remixed. As a company all identifying as disabled, we are working from a disability perspective, but true to crip culture, the tone is joyously irreverent as we interweave stories about acting, difference, and a maligned historical figure through an unreliable narrator.

I… one of those from the margins,
the shadows,
come here now to stand before you
and reclaim what is mine-own:
this crooked shape,
this self-same body
that has been taken
from me and mine.

It is a reclaiming. There is also something immensely powerful about a small woman, gilded in chainmail, standing proud and crooked, saying these lines.

I love this idea of re-claiming. And it can be done in many forms! I've seen productions of Richard the III where his closest advisors were Deaf and used sign language, and heard of another where all of the roles EXCEPT Richard were played by actors with disabilities. In 2018, my mantra is slowing becoming, "If you're going to tell a familiar story, tell it in an unforgettable way."

PS-- I love Peeling! Thank you for sharing that play with the world.

That's perhaps the mantra we all should try and follow - "if you're going to tell a familiar story, tell it in an unforgettable way" - it was certainly what I tried to do with The Trojan Women in 'peeling' - so thank you so much for that compliment.

I am all for reclaiming the neurodivergence of Richard III.

Great! Thank you for that affirmation!