Recommended
Devising Our Future
HowlRound Theatre Commons
Most Discussed
Naming the Trope: A Deep Dive into the Harmful Uses of Disability Stereotypes in the American Theatre
Ben Raanan
Most Watched
A Conversation About the Making of Addressless
Tuesday 11 January 2022
Upcoming
Livestreaming a Convening: The Ellen Van Volkenburg Puppetry Symposium
Saturday 22 and Saturday 29 January 2022
Essay by
Elyzabeth
Gregory Wilder
Parenting & Playwriting

Playwright Elyzabeth Gregory Wilder returns to the Alabama Shakespeare Festival’s Southern Writers’ Project with a new play and a new kid. Follow Elyzabeth in the final installment of this three part series (find part one here, and part two here) as she tries to balance rewrites and rehearsals with the challenges of being a working mom on the road.

I’m feeling pretty good about myself as a parent right now, because The Short Person now screams out Shakespeare! every time we enter the theater and pulls me toward the giant Shakespeare statue that stands guard in the lobby. It is always punctuated with an exclamation point, much like Oliver! and Oklahoma!.  It might be her best baby trick yet.

I still feel like a horrible parent every time I leave her at daycare, even though Miss Jackie and Miss Sherrie assure me that she’s fine within minutes of my departure. I know it’s true because when I go to pick her up every afternoon she doesn’t want to leave. If she’s that happy there, then I feel confident that she is receiving great care. That makes it all a little bit easier.

We have fallen into a nice routine. I drop her off at 8am, then head to the theater where I work on my script before rehearsal starts at 9am. A 9am rehearsal seems like cruel and unusual punishment for most theater people, who are nocturnal by nature. But since my director, Hana Sharif and I both have toddlers we have already done laundry, built a Lego castle and are wondering what’s for morning snack by 9am. 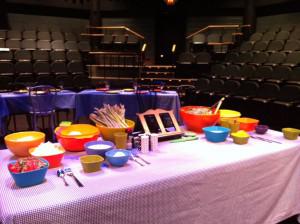 Rehearsals have been going well. We came into the week with a script that was in pretty good shape, so most of our focus has been on the logistics of the piece. Because I cook on stage it feels like one big magic trick. In an attempt to expand the piece to a larger audience (it’s written for an intimate audience of twelve) we have been playing with various scenarios. One of the things that I love about being at the Southern Writers’ Project is that they would much rather me take a risk and fail, then to not take the risk at all. Each time we run through the show we learn something and I start to feel more and more confident.

When rehearsals are over in the afternoons I pick up The Short Person and we go back to the theater, where we spend the afternoon running around the gardens and feeding the ducks. She chases them, quacking enthusiastically as if she were greeting a long lost friend. Then it is home for dinner, a bath and books.

Hopefully, she’ll say that her mom took risks and followed her bliss and was a badass. Then maybe, just maybe, she’ll have the courage to do the same.

Despite having the Nice Methodists care for her during the week, I still needed a babysitter for Friday afternoon while I was doing my show, and for the rest of the weekend. With the help of the theater I was able to find someone who had worked for them before, but on Thursday was told that she had to cancel. Plan B quickly fell into place, although I’m still going to miss a couple of the readings this weekend. I hate that I won’t be there to support the other playwrights.

So on Friday I picked the Short Person up from daycare and brought her back to the theater, where our sitter was waiting. She was kind enough to meet us the night before so that I didn’t feel like I was handing off the Short Person to a complete stranger. With a bag of hotdog buns and the promise of a trip to feed the ducks she quickly transitioned: no tears and only a minimal amount of mommy guilt. 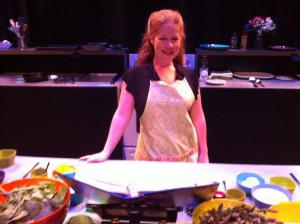 The show started and when the audience laughed for the first time I was able to breathe again. The new material, which we weren’t able to really test until we had an audience, worked. The audience was engaged and participated. Twelve guests sat on stage with me and ate the meal I prepared. And I didn’t burn the food or myself.

When I walked off stage our production assistant said that I had a special guest waiting for me in the greenroom. When I walked in there was The Short Person. She had watched my show on the monitor.

I’ve been really fortunate to support myself as a writer for the past ten years. Being able to say that now means even more to me than it ever did before, because I want my daughter to grow up knowing that you can do something that you love. After a year at home feeling a little overwhelmed by life, I realized that I wasn’t the woman who I wanted my daughter to know. I want to be the kind of woman who I want her to grow up to be. One day I’ll tell her the story of this adventure, and hopefully she’ll look back and say that her mom had an idea and she followed it through and it brought a lot of amazing people into her life. Hopefully, she’ll say that her mom took risks and followed her bliss and was a badass. Then maybe, just maybe, she’ll have the courage to do the same.

Alabama
U.S. by State
Most Discussed
Naming the Trope: A Deep Dive into the Harmful Uses of Disability Stereotypes in the American Theatre
Ben Raanan
Most Watched
A Conversation About the Making of Addressless
Tuesday 11 January 2022
Upcoming
Livestreaming a Convening: The Ellen Van Volkenburg Puppetry Symposium
Saturday 22 and Saturday 29 January 2022

Elyzabeth- Thank you, thank you for sharing your experience. I am actress about to have my first child and I am overwhelmed, excited....all of the feelings I'm sure you had. These installments of your time with the Southern Writers' Project have been comforting and inspiring. You are a badass and your daughter is all the better for it!