Over the past month at the Alabama Shakespeare Festival (ASF), in the state capital, twenty-four students from Montgomery Public Schools were on the theatre’s mainstage. They were memorializing lives lost from American-born terrorism in Christina Ham’s Four Little Girls: Birmingham 1963. Both this piece and Ham’s sister play Nina Simone: Four Women, which ran in rep, were about the terrorist bombing at a church that killed four children who were black: Addie Mae Collins, Cynthia D. Morris Wesley, Carole Robertson, and Denise McNair. The terrorists were grown, white men.

There is a wide-eyed awakening happening at the regional theatre rooted in the space that saw the rise of the confederacy and the civil rights movement. Initiated with a comprehensive tour last summer interrogating the state of the South and a twenty-two play commission of a new regional canon, ASF is aiming to give artists and audiences control of their story. 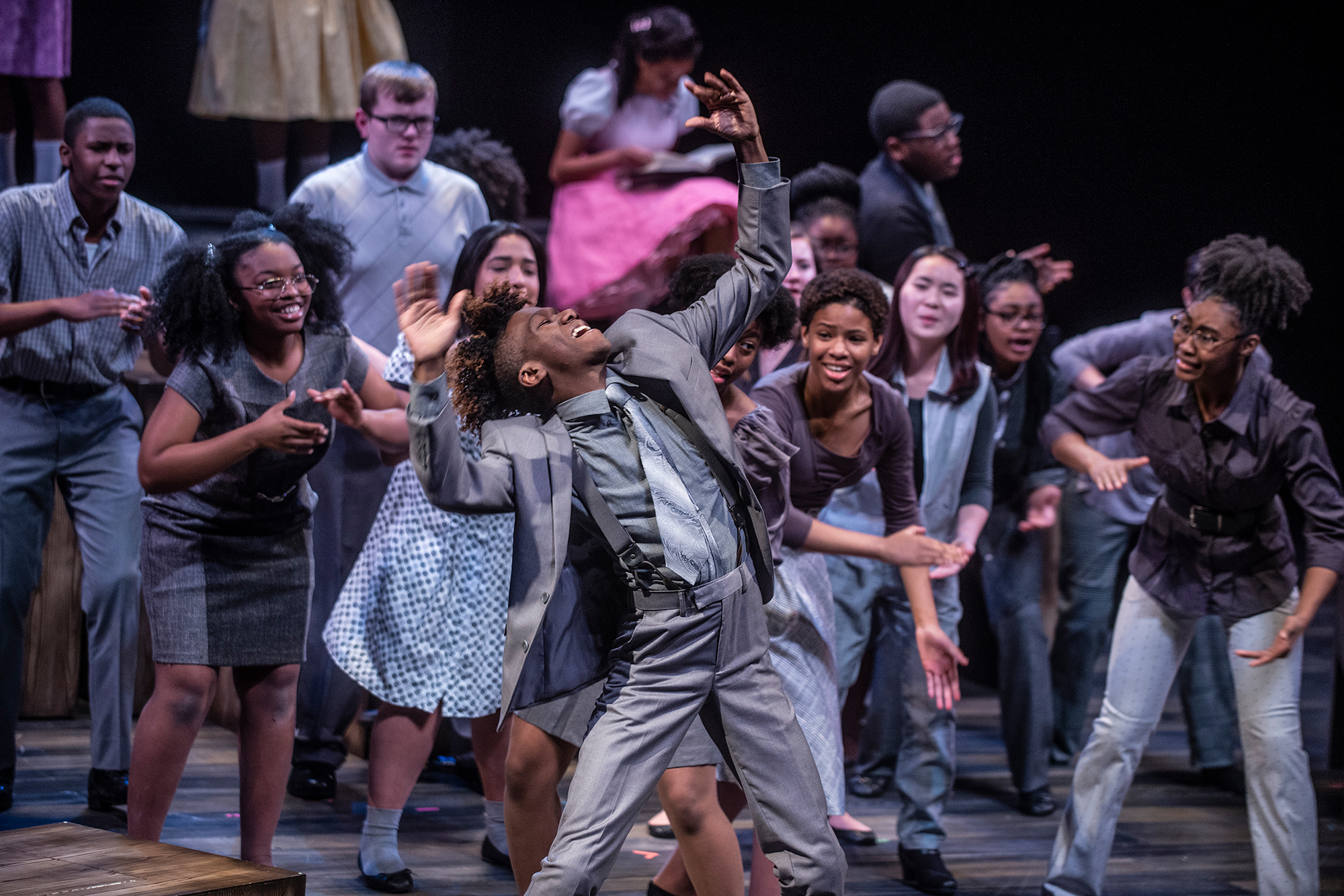 February invites a time to celebrate and consider the history of African Americans. It also attracts an interrogation of our American narrative, and a critique of educated America’s complacency with regional complexity and the romanticization of trauma.

“I wish Black History Month wasn’t relegated to a month,” said Rick Dildine, artistic director of ASF. “That’s something I’m personally interested in—that we don’t compartmentalize moments. Black history is American history; they run alongside each other. They are interwoven.”

At the heart of Four Little Girls, which focuses on the next generation of Alabamians telling the story of their ancestor’s past to the state elders themselves, is a critique of America’s immature, assumptive approach to understanding Alabama where, in the nation’s imagination, tragedy outweighs triumph, problems overwhelm potential, and cheap-and-loud stories of white noise have more currency than humble-and-rich stories of black courage and brilliance.

Reflecting on the play, Lisa McNair, the sister of one of the little girls, said: “My education had been denied of the goodness and strength of my people,” then added: “This is American history.”

Ham, whose mother was a member of the 16th Street Baptist Church—the site of the bombing—wrote the play with the aim to humanize Alabama’s civil rights history, “reminding people of [the victims’] names since they’re only referred to as the ‘four little girls,’” she said.

There is a tendency to demean Alabama’s presence in transatlantic history. Our Americana instincts tell us that Boston is where the against-all-odds American revolutions happen, not Montgomery. It’s a convenient simplification of regional identities, reckless in its erasure of African American figures. Considering the brave contributions of civil rights footsoldiers, “all of us are black history,” said Alabama’s Democratic Congresswoman Terri Sewell in a public conversation reflecting about the play.

There is a wide-eyed awakening happening at the regional theatre rooted in the space that saw the rise of the confederacy and the civil rights movement.

“I think theatre is local,” said Dildine. “Once an audience feels like they’ve learned the rules, that’s the moment you change them.” According to him, the rules Alabama Shakespeare Festival had set up over its forty-year history were those of majority male and majority white stories, produced by artists who did not live in the state and who had no connection to the land, the people, and the culture. “That’s been the given,” he says. Now in his second season, Dildine has set out to revolutionize that institutional legacy through intentional, humbled listening.

To envision the lifeforces of Cynthia, Addie Mae, Carole, and Denise for Four Little Girls, the Alabama Shakespeare Festival exclusively enlisted the young people of Montgomery Public Schools—a school district where 78 percent of who are African American, 9 percent who are white, and 4 percent who are Hispanic—to animate the history. This was a bold move for a theatre redefining its relevance and a school system in crisis. (Since 2017, Montgomery Public Schools have been going through a turbulent state takeover.) 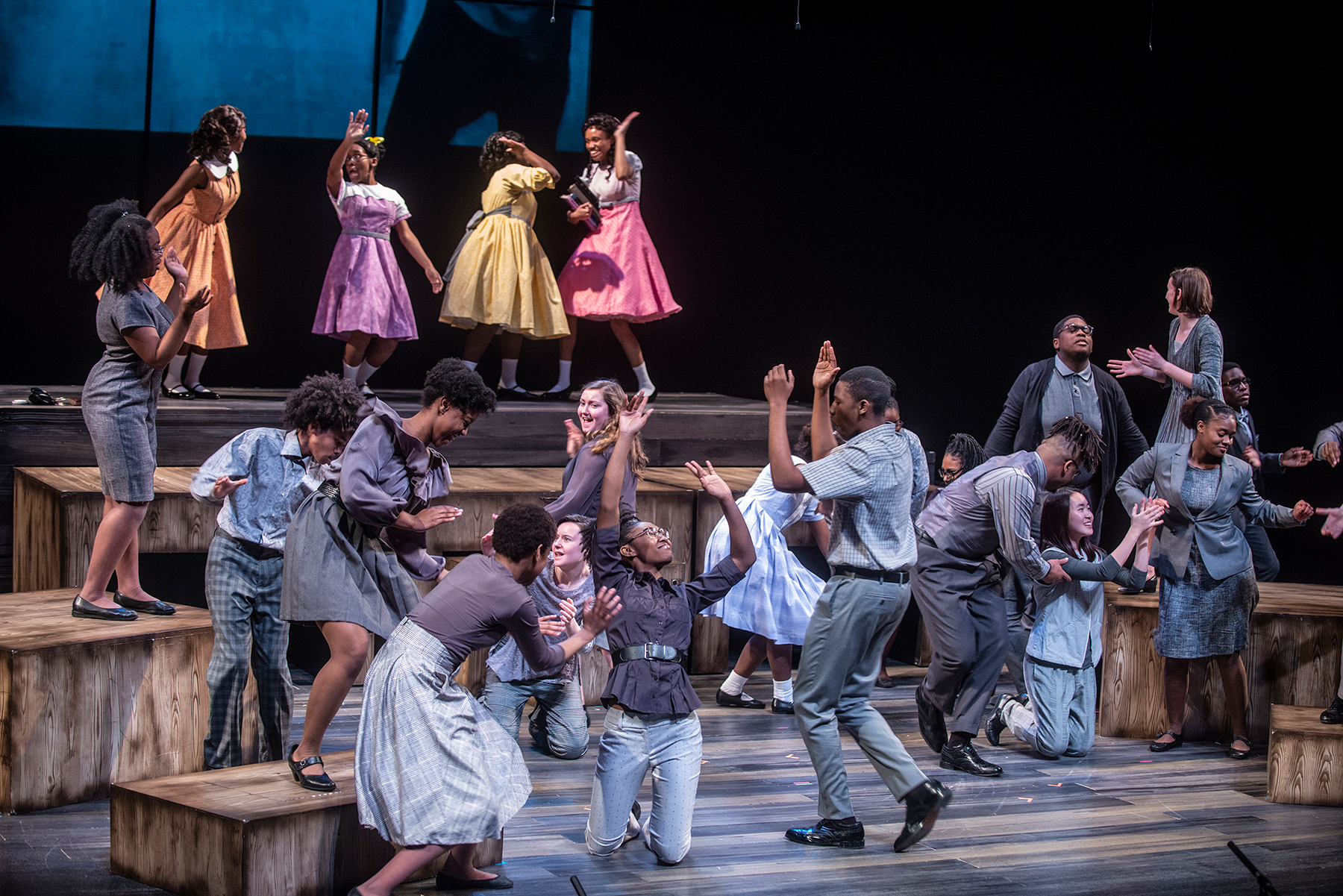 Four Little Girls dances and sings in the tension between the universal whimsy of childhood and the specific trauma of terrorism in the American South—a trauma that has reemerged in the hostile era of “make America great again.” The young people of Montgomery remind audiences that America was never great for children of color in the gerrymandered state that voted for Donald Trump’s nationalist campaign by 62.1 percent in 2016.

Theatre for Young Audiences on the Mainstage

This production of Four Little Girls aimed to democratize the mainstage for the people of the community. ASF’s campus is a red-brick castle, fortified with hills and lagoons from the poverty that surrounds it. Giving the stage to young people is a reallocation of power as a way to embolden the community with dignity rather than oppress, intimidate, or exclude them. Offering youth the opportunity to create theatre—and, especially, theatre for young audiences (TYA)—is a way to engage non-traditional audiences and artists in the theatregoing experience; TYA supports young voices, affirms the dignity of the child experience through public space-making, and tells stories for a multigenerational audience in a vernacular that can be easily interpreted.

The optics and intentions of ASF’s programming help counter that. Seeing twenty-four students on the mainstage—the majority of them people of color—is a testament to a new direction, for the company but also the American regional theatre.

Seeing twenty-four students on the mainstage—the majority of them people of color—is a testament to a new direction, for the company but also the American regional theatre.

The Best Way to Educate People is Through Young People

“I treated this production just like a professional production,” said Four Little Girls director Tangela Large. “We did have ‘classes’ before the actual rehearsal process, but my main objective as far as the classes were to create a safe space where the MPS students could bond.” 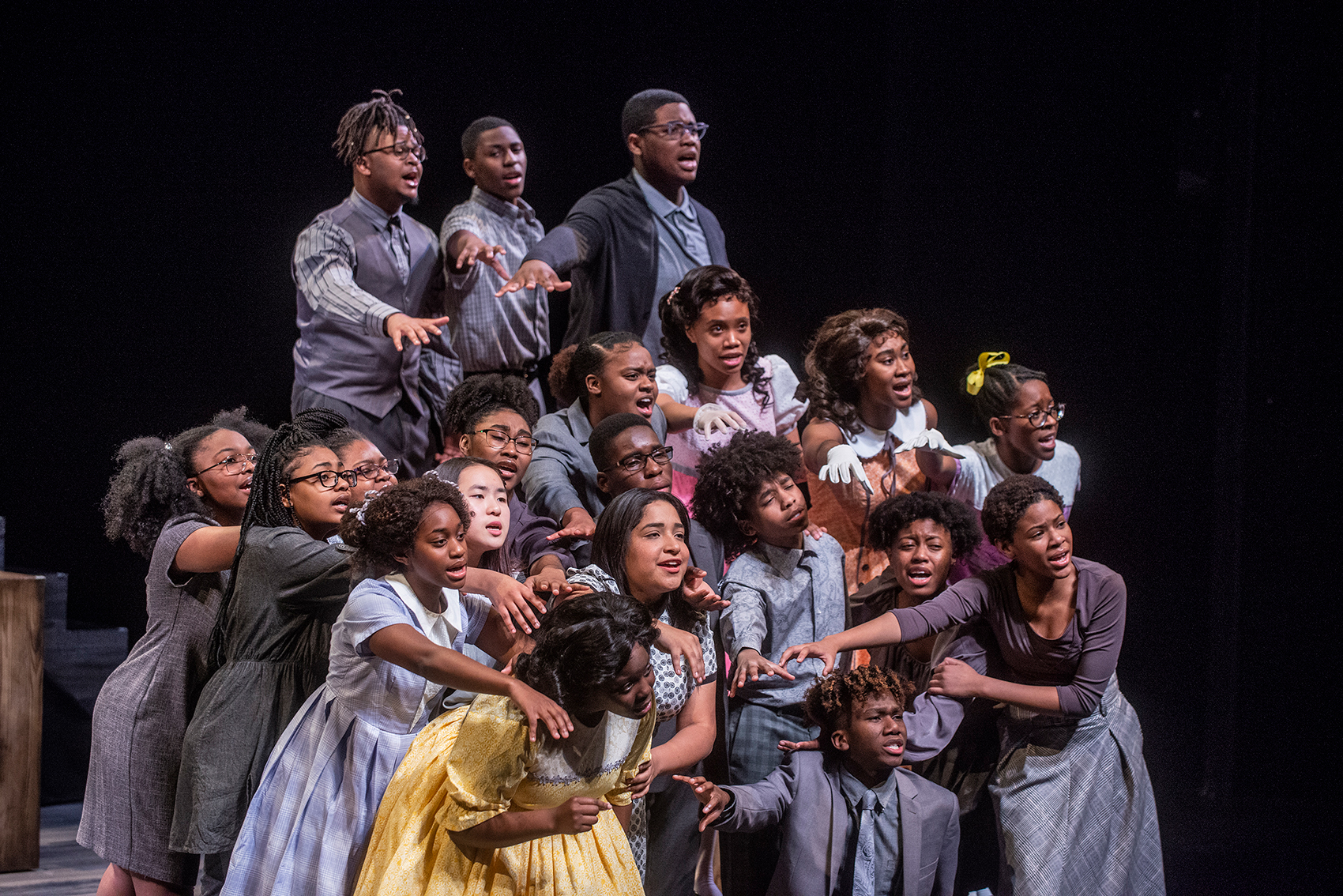 Bonding and trust were necessary for an ensemble charged with unpacking and enlivening the story with profound dignity, pain, strength, terror, hate, and faith. Their audience would not only be their classmates—students bussed in from around Alabama—but also older patrons who lived through the civil rights era in the state.

“The only pressure I felt was to make sure that when the elders (white and black folks who were reared in the civil rights movement) saw this production, they would feel a sense of accountability and joy in connection to the storytelling,” said Large.

In a conversation panel about the power of telling the stories of young women on stage, elder Doris Crenshaw, an activist icon, said: “Young people answer to young people. All of the movements of the world are steered by the women and youth.”

Four Little Girls is a movement to engage young people in the dignity and courage of their history. This movement shines through particularly in the performances of Trinity Ross and Charles Hunter—two student-actors who both attend Booker T. Washington Magnet. Ross and Hunter are mesmerizing on stage and engaged community ambassadors off stage. “The best way to educate people is through young people,” said Ross.

"Sometimes as Alabamians, we don’t want to accept our painful history,” said Sewell. “The reality is if we don’t tell our stories, others will. As Alabamians, we embrace the good and the bad of our history—and elevate the fact that we still have miles to go before we sleep."

A Movement of Conversations and Healing

If ASF is attempting to spark a movement of racial reconciliation that emphasizes promise, not trauma, it’s not just happening in the theatre. In a partnership with downtown community center Kress on Dexter, ASF has coordinated community post-play reflection conversations led by social worker and Auburn professor Shakita Jones (“I’m a social worker with a microphone and a platform,” Jones says).

With free coffee and biscuits, the theatre keeps the conversation in downtown community space at Kress—outside of ASF’s distanced (and privileged) walls. “The truth is that Montgomery remains the heart of the confederacy—rooted in a lot of past trauma that needs awareness and attention,” said Large. “If we as a national collective are never willing to sit in our truths, then how can we ever heal?”

Alabama is not the only fractured place in America, though it is often scapegoated as such. But Alabama Shakespeare Festival is taking steps to model the healing power of theatre in a deeply wounded America.