This series on Audience Engagement explores the diverse relationships between theater and community through personal narratives and innovative methods of practice from a select group of artists and practitioners. We invite you to join the conversation and look forward to your thoughts! —Amrita Ramanan

In June 2008, I resigned my position as a Shift Supervisor for the Chicago Rape Crisis Hotline in the Women Services Department at the YWCA of Metropolitan Chicago to move to Cincinnati, Ohio and work as a Field Organizer for the 2008 Obama For America Presidential Campaign. I still remember the shock of the phone call and how scared I was to leave a job that I loved (one that I had held for five years) to move to a city I had never been to, to organize people I knew nothing about. My father is a politician in Chicago and I grew up working on my dad’s campaigns. As a young teenager, I knocked on doors, stuffed envelopes and attended press conferences with “Citizens for Prince,” a grassroots organization that my father had created, based on outreach to various churches on the Southeast Side of Chicago.

Stories are what ultimately drew me to then-candidate Obama’s first presidential campaign. Although I agreed with most of candidate Obama’s policies, platforms and speeches, I also felt a certain kinship with Obama because he was a community organizer on the South Side of Chicago like myself, and we frequented the same church. My best friend’s mother taught at the school his children attended, and I almost went to the same school that Michelle Obama attended growing up. I felt like I knew his story in an intimate way. Even before I received my official training manual, I also had a hunch that stories and storytelling would play a pivotal role in his campaign strategy. Sharing your story is an essential tool for any community organizer. And—this is my jam—when the performative turns political.

Community Organizing is a lot like street theater. The inherent tension between actors and audiences during a performance is a lot like the tension between an organizer and a potential supporter during a voter registration drive. Like method trained actors interpreting characters, organizers offer up personal and emotionally honest stories for participating in a campaign, and the person or group they are addressing feels more connected to their experiences and vision. Empathy—the ability to see yourself in the eyes of someone different than you—becomes a powerful and persuasive tool in both spaces. 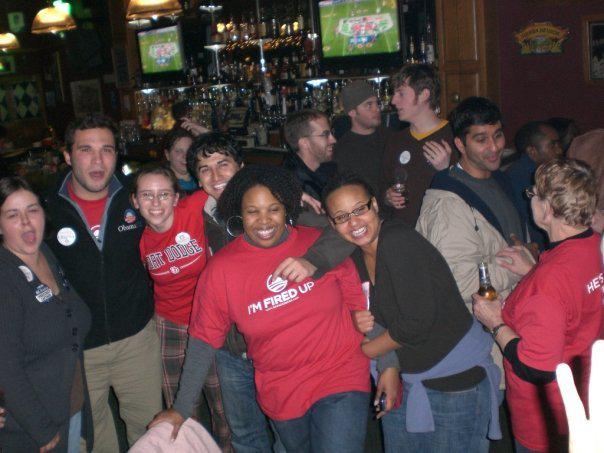 My favorite memories of the campaign, on which I volunteered for a year and a half, was in Iowa—where I was an Assistant Precinct captain in Fort Dodge. My experience in Iowa also revolutionized my thinking about diversity. We were Yale Law Students on sabbatical, wealthy twenty-somethings from Southern California, and community organizers from the inner cities, like myself. We were black and white, old and young, rich and poor, but united around a common purpose, and our differences only made us stronger. Our unprecedented victory in Iowa taught me about the power of hard earned unity. I now believe that as administrators and artists in non-profit American theaters, we must train ourselves to be allies—not just in our theaters with our co-workers and fellow artists, but also as allies to our audiences in our local communities, in our nation, and in our world. 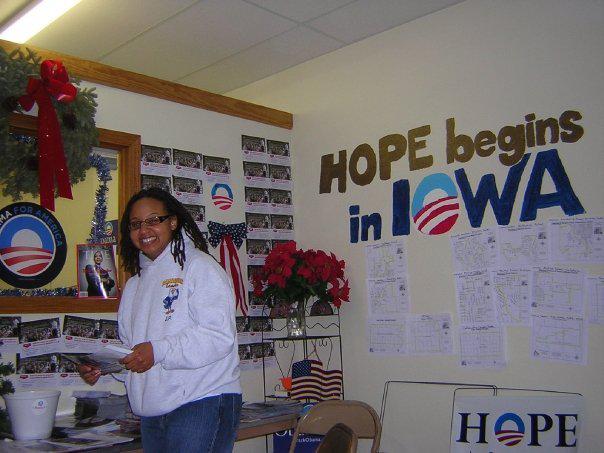 From the moment I walked through the doors of Woolly, as the newly hired Connectivity Director, I was excited. I found the collaborative way of knowing and working that is characteristic of Woolly’s culture challenging to adapt to at first. But a young, enthusiastic staff and a vision for all the possibilities for audience engagement that existed in the corners and crevices of our shiny new building inspired me.

Woolly’s innovative Connectivity Department was developed and established four years ago in order to activate the civic dialogue that lies at the heart of Woolly’s mission statement. It is my job to anchor Woolly in the community as a place to explore ideas relevant to our lives, thus providing pathways for civic engagement. Our goal is that our patrons will be affected not only aesthetically by our plays, but that they will also be inspired by the civic challenges presented, and that this work will nudge new theater closer to the center of Washington’s civic and political life.

I have also coordinated a shift in focus for the department’s goals—from the internal to the external. Our current thinking creates linkages between art and creativity, analysis and dialogue, and activism and civic engagement. But from my first show as Connectivity Director, I learned the hard way that the DC communities’ voice must be incorporated into my plans early on.

I now believe that as administrators and artists in non-profit American theaters, we must train ourselves to be allies—not just in our theaters with our co-workers and fellow artists, but also as allies to our audiences in our local communities, in our nation, and in our world.

Last fall we produced Kris Diaz’s critically acclaimed Hip Hop play, The Elaborate Entrance of Chad Deity. The play explores the challenges of American multiculturalism through the lens of WWE-style professional wrestling. For our brand new House Lights Up series, I reached out to a non-profit organization called Hustle, Muscle, and Mat Club that provided low-cost wrestling clinics to young aspiring athletes. We organized low-cost wrestling clinics for our audiences in our rehearsal hall during the run of the show in an effort to cultivate new, youth audiences. We laid out the mats, posted the event on our website, and secured the necessary liability insurance—but no one came (almost literally). This failure in execution was heartbreaking for me, but it taught me that it is not enough to have a great program and good intentions, and that I had to do the hard work of incorporating the voice of our local community in our strategy for House Lights Up to be a successful program.

My favorite example of this hard lesson learned is our recent partnership with the Brookings Institution on a post-show discussion and book signing House Lights Up event in association with our recent production of Detroit by Lisa D’Amour. My intentionality with this event was driven by the thematic content of the show, which aligned with a new book called Confronting Suburban Poverty, and an advocacy initiative spearheaded by the book’s authors Elizabeth Kneebone and Alan Berube. We stuffed toolkits in our playbills so our audience members could learn more about this prevalent issue, and leave the theater with clear and specific action steps they can take to alleviate local poverty. At Woolly, we call this self-directed citizenship.

Although still in its infancy, this strategy seems to be working. The Connectivity section in our Playbills is a page offered to community members who have had deep experiences at Woolly as participants in Connectivity programming. We consult with community leaders and stakeholders before launching Connectivity new programs and initiatives to gain consensus, and we have worked to diversify our core volunteer group—The Claque— both demographically and psychographically. It’s exciting and I’m honored to play a role in its early successes.

Woolly Connectivity seeks to establish itself as a model for the field for engaging internal and external communities in an authentic and allied way. The non-profit theater world is uniquely poised to engage in cross-cultural collaboration and to facilitate understanding among diverse constituencies through creative art-making, love, and laugher. Our exchanges and interactions have the unbridled potential to positively affect both individuals and our society at large.

For our industry to move forward, it is not enough to produce excellent work and to tee up provocative conversations with post-show discussions. We must also make a case for relevance in a two-way exchange with our audiences by tapping into our local zeitgeists and asking community members questions about their personal and professional interests, dreams, fears, and hopes for the future. This is not only how the American theater will survive, but this is also how we, as artistic leaders, will ultimately do the hard work that is needed to change the world.

Amrita
Ramanan
Thoughts from the curator

What ingenuity! What creativity! This puts theater in a vital role where it surpasses entertainment and becomes engagement. Let's hope this becomes a model for theater companies nation-wide.

Quite a strong case for arts programming that is sincerely rooted in community. I wonder though if the prevailing theater programming models (with seasons planned months and years in advance) is nimble enough to sustain the relations it can build with niche shows and programming. For example, I finished this essay wondering if the boxing lessons project had been more successful, would those youth have good reason to come back for the next show or another show down the line?

This represents the avant-garde of audience to company interaction. The connections that Prince draws between her experiences on the Obama campaign trail and her work for Wooly are fascinating and revealing. I wish we had this type on connectivity in the Chicago area.

A really smart take on how we can actually do what we're always talking about doing in the arts.

"Our current thinking creates linkages between art and creativity, analysis and dialogue, and activism and civic engagement." Without doubt, this is the present and the future of American Theatre. We're in a time of great upheaval and turmoil, and many of our playwrights are handing us the mirror but too many of us keep swatting it away, for various reasons. Taking theatre to the people and engaging their voices in the artistic process is the only way that theatre practitioners are going to survive in our distracted, over-stimulated society.

Collaborations, yes! Engaging audiences, yes! Taking risks, Yes! Failing, trying again, and again, and again, yes! Learning and listening, yes! But, I always ask, what about when it's over, when the play is over, the conversation is finished, the workshop is done, what then? "Self-directed citizenship", that's it. You remind me that if we are interested in community and we are enforcing it from our mission, that it doesn't necessarily end, when the play closes, when there is no more talk and the workshop is over. The dialogue continues by our community. Thank you.

I really appreciate learning about where your passion for engagement and connecting with audiences lies, and that it is deeply embedded in your desire to activate civic dialogue. I also dig hearing about the challenges, where it hasn't had the effect you hoped for, as well as the successes. My experience of the connectivity work at Woolly (full disclosure: I'm a company member) has been that the inquiry is genuine and about much more than just getting asses in the seats (though that too!), and that the various strategies employed really are having a positive impact on the audience's experience of the work, in terms of contextualization, yes, but also of expanding the parameters of engagement after the experience in the theater. it seems to me that deep, critical thinking and dialogue has always been at the heart of the process of choosing and making plays at Woolly, and these efforts, at their best, really open up that thinking to and ignite that dialogue amongst audience members in an exciting way.