Burning Down the House at Theatre Unbound 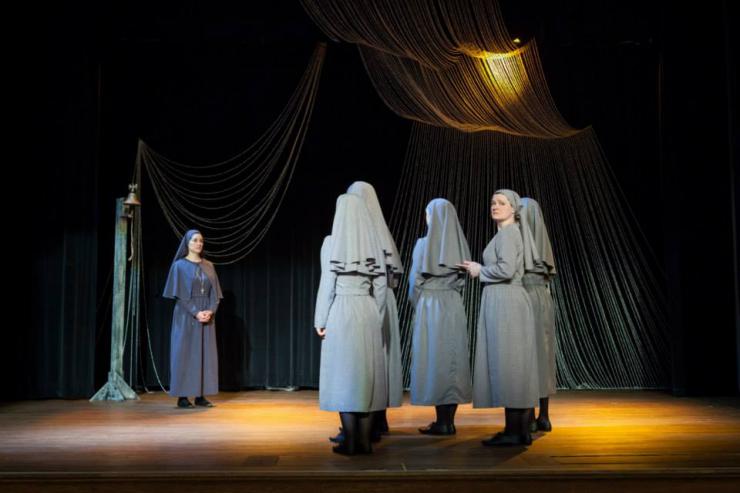 As a theater-maker in the Twin Cities, I’ve attended many conversations and organized gatherings about the generation of new work and the best practices on how to produce new work. Maybe it’s because theater makers are tired of seeing and being in Romeo and Juliet. Maybe it’s because The Playwright’s Center brings a barrage of writing talent here and sometimes the writers stay in the Twin Cities and produce shows at places such as the Workhaus Collective. Maybe this is a national conversation as theaters are looking more and more to the production of new plays to invigorate the art form. Whatever the reason, I find myself drawn to “new” productions so Theatre Unbound’s Silkworms (a nun play) caught my eye. It’s a new devised play about an old nun story.

Director Isabel Nelson was approached by Theatre Unbound after several company members saw Red Resurrected at the Minnesota Fringe Festival in 2011 which was devised by Nelson and the company members of Transatlantic Love Affair (TLA). “Several of us texted each other and said, ‘When are we going to work with her?’” said Anne Bertram who is executive director of Theatre Unbound, a founding artistic associate of the company, and collaborating playwright for Silkworms.

Unbound’s mission is to deliver thought-provoking theater conceived and created by women and Nelson’s Red Resurrected was a beautiful and creative re-imagining of Red Riding Hood. It told the story of a parentless girl drawn to the danger of the woods where she encounters wolves (both metaphorical and actual) and finds herself while lost. The main character was strong and her story was fresh and inspiring. Naturally, Unbound would want to foster Nelson as an up and coming woman artist, but I initially wondered about Bertram’s collaboration in the creation Silkworms as a playwright.

After reading this HowlRound article, where Michael Rau and William Davis write, “Often theaters agree to take one ‘risky’ choice in programming a new work and then make fifty safe choices to frame that choice," I found myself thinking that Unbound was trying to play it safe by partnering a new artist like Nelson with Bertram, a theater veteran; in Nelson’s previous works she was both director and playwright. After attending some rehearsals to gain insight into Nelson’s devising process and interviewing both Nelson and Bertram to better understand the collaboration between Nelson and Unbound, I don’t believe that’s what is happening here at all.

When Nelson was initially approached, she told Unbound that she would be happy to direct a Shakespeare or contemporary piece, but it was clear that Unbound was interested in her devising work. Bertram as well as three other of Unbound’s company’s members (actors Delta Rae Giordano and Laura Wiebers and stage manager Lyndsey Harter) have joined Nelson in the creation of this new work and are using this opportunity to gain insight into Nelson’s process. Nelson is gaining the experience of directing for an artistic company she isn’t spearheading as well as the experience of devising work with a new troupe of actors.

Nelson graduated from Macalester College in 2004 and then trained at the London International School of Performing Arts where she learned the style that has been the trademark of her work. Nelson’s aesthetic has charmed Fringe audiences for the past four years and can best be described as physical-based theater where seven actors create an environment with their bodies; all props are mimed, all sound effects are vocal, and all stories are original. Nelson comes up with the germ of an idea, she creates tableaus of major moments with the ensemble, and then they spend weeks generating potential scenes to tell the story. Nelson will ask the actors to break into groups and give the actors x many minutes to tell story y. The actors then talk through how the scene will go, improvise, and at the end of the time limit share it with the room. All the while Nelson sculpts the scenes. During the showings, she'll ask the room, "What did you notice?" as well as provide her own insights on what she saw. She excels at creating a “yes, and” environment. No idea is attacked and the best ones might be lifted to the final show if they serve the story which Nelson read in Craig Monson's book Nuns Behaving Badly: Tales of Music, Magic, Art, and Arson in the Convents of Italy. Nelson loosely adapted the true story from Monson’s book by creating fictional characters and expanding the narrative.

Nelson comes up with the germ of an idea, she creates tableaus of major moments with the ensemble, and then they spend weeks generating potential scenes to tell the story.

The story follows a group of Dominican nuns in seventeenth-century Italy who burned down their convent after word comes from a new monsignor that they must close "the grate" which acts as a window to the outside world. The nuns use the grate to talk to their family and give/receive gifts. They even pass a baby through it! Angered by the decision, the nuns either by accident or protest burn a batch of cocoons to hinder silk production that will affect the monsignor's balance sheet and stick him where it hurts. Meanwhile, the nuns are no longer able to accept goods from the grate and the higher ups, potentially angered by the lack of productivity, begin decreasing their rations. The nuns begin to starve and the prioress becomes ill. As the desperation increases the nuns hatch a plot to burn down the convent in order to escape and begin trying to convince the most faithful that this is the only option for survival.

After I saw Silkworms, Bertram asked me if there were any surprises after observing rehearsals and there were two. During rehearsals, I saw the actors and Isabel discuss each character with such depth and insight I thought the piece was going to be extremely character driven. However, during the final show that changed. Maybe it's because six of the actors were dressed in a nearly identical nun costume, but the show seemed to be more forcefully about a collective of people.

The other surprise involved what turned out to be a minor plot point. There used to be a class system in seventeenth-century nunneries. If an upper-class lady became a nun, they were considered ladies in the convent and the lower-class nuns often acted as their servants. When I spoke with Bertram, about why this story was important today she explained how in the play the nuns began to work together across class lines and how that message is still important today. I learned about the class system in rehearsals, but I'm not sure that the class tensions translated to the final production. Other than the lower class nuns wearing slightly darker outfits and calling one of the upper-class nuns "lady," the implications of class tension and subsequent class breakdown weren’t as visible as I had anticipated.

Silkworms had some beautiful moments that are characteristic of Nelson's style. The moments when the nuns spin silk on imaginary machines resembles dance movements and the fire at the end of the play was stunning. Each nun lit an invisible match at the downstage edge of the stage and, as the fire grew the lights turned red, the actors exhaled short breaths and walked backwards. Theresa (Laura Weibers), the last nun to accept the plan was the last to walk out of the fire and for a moment it felt like she was going to stay in the convent while it burnt to the ground. It's in this final moment, where the meaning of the piece hits the hardest. Theresa had nowhere else to go and perishing in a fire seemed just as good an option as a life outside the convent. The last thing the nun in the audience told me was, "I'm struck with the differences between nuns of that era and the nuns of today. So many of them really had no choice."

We been reading a lot of controversial and sometimes confrontational discussions lately on this site.

We been reading a lot of controversial and sometimes confrontational discussions lately on this site. Yes, it is a welcome respite for this exploration on process of creating work with varied artists of differing aesthetics and processes. We seldom get to be a visitor to the inside and final presentation of pieces. Looking through Chris Garza's critical gaze (albeit from only two rehearsals) it is a reminder of the process that we are engaged with - still making meaningful performance experiences. I anticipate that other active makers as well as critical writers would be willing to share about their presence in process.

Thanks for this great in-depth look at a play, a theater, and a director. I long for the vibrancy of Twin Cities theaters that I experienced in college, but we're working on it here in Baltimore...just gotta keep setting the bar higher and higher, and have audiences keep showing up...