Recommended
Devising Our Future
HowlRound Theatre Commons
Most Discussed
Designing Collaboration: In Search of a Taxonomy of Collaborative Methods
Emily McConnell
Most Watched
The Gathering from the CrossCurrents Festival
Wednesday 4 May to Saturday 7 May 2022
Upcoming
Livestreaming a Conversation: #DeafWoke with John Autry II
Friday 20 May 2022
Essay by
Keith Josef
Adkins
Nathan
James
Nathan
Yungerberg
Hands Up Series by Keith Josef Adkins

Testaments From The Policed

The death of Trayvon Martin in 2013 and the trial that followed exhausted me, both emotionally and spiritually—perhaps even creatively. As a theater artist, I am dedicated to bringing complexity and authenticity to all characters I create, particularly black and brown ones. So it was very difficult to watch a televised legal discourse on whether or not a young black man deserved to be shot to death simply for being young, black, and fighting back. It was a reminder for many that black men, regardless of age or class, incite criminal suspicion and can often be murdered because of it. Thankfully, the incident inspired me to create Facing Our Truth, “our” being the operative word; our country, our history, and our collective responsibility to reverse the crimes of privilege against black and brown people. Facing Our Truth was a series of ten-minute plays inspired by the death of Trayvon Martin, and it continues to incite valuable dialogue about race, privilege, and profiling throughout the country. In truth, I thought more dialogue wouldn’t be needed for a quite a while. However, the police shooting of Michael Brown in Ferguson was something much more eye-opening—and it happened only a month after the world watched Staten Island police officers put 350-pound Eric Garner in a murderous chokehold. We as a society listened to Eric Garner plea “I can’t breathe,” yet no one was able to help. He had no voice worth noting.

I left a business meeting in Harlem last week to join the hundreds of #blacklivesmatter protesters in Times Square. We marched from 43rd and Broadway to the United Nations, chanting, “What does democracy look like? This is what democracy looks like?” We were cheered on by taxi drivers and even heckled by tipsy socialites. We were also followed by dozens of NYPD officers, fully capable of silencing our voices. And that’s what missing in all of this healthy social turbulence. The unheard voices of Trayvon Martin, Eric Garner, Michael Brown, John Crawford, Amadou Diallo, and thousands of others.

It’s the silencing that inspired me to commission six African American male playwrights to bring voice to the black male through monologues. I call it HANDS UP: 6 Playwrights, 6 Testaments. I want this new collection of ten-minute monologues to give voice to silenced black men, to break open the institutional image of the suspicious black man, and provide stories of complexity, vulnerability—simple humanity. These six playwrights—Nathan James, Nathan Yungerberg, Idris Goodwin, Glenn Gordon, Eric Holmes, and Dennis Allen II—held back no punches or tears. They took great honor and courage in sharing stories about the well-being of the black male. They put to words what many protestors have been chanting in the streets.  They’ve given voice to the silenced. I want to share the voices of six black male playwrights who have a lot to say about this country and the silenced men.

And so for the next few days, I will be sharing excerpts from each of the plays they wrote. 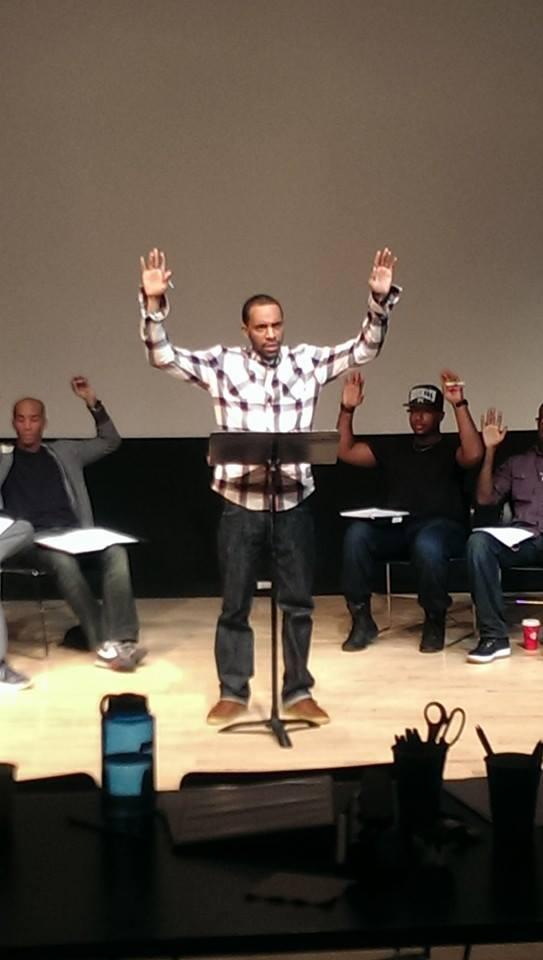 Nathan James’s Superiority Fantasy
I was driving one night in Pittsburgh. Pulled up to a stop sign behind a rustic red chevy that was literally going 15 miles an hour, on a 20 mile an hour street. I stayed patient for two blocks. The shit got annoying so I went around him. After that, began to speed up getting really close to my bumper. So I sped up to get away from him. He began to speed up again, pulling up close to my bumper. Being very much aware of what neighborhood I was in, I decided to punch it and get the hell out of there. He started to speed up again, getting close to my bumper. My mind started to wander. This guy could be anybody. Maybe it was the bloods from Garfield looking for a random person to do a drive by on. After this four block chase, I pulled up to an intersection and was surrounded by police squad cars. I had been followed by undercover cops (who never flashed their lights or put on a siren). The guy in the chevy got out of his car, yanked my car door open as he and another cop pulled me from my vehicle to the ground. All of the other cops had their guns drawn on me. As he pulled me out of my car, I heard him repeatedly say “Where the fuck were you going so fast. Get your black ass on the fucking ground.” They slammed me on the ground, one of the officers put his foot on the back of my neck. Another officer put a gun to the back of my head and said “Move one inch and I’ll blow your fucking head off.” They began to search my car. I informed them that I wasn’t a criminal. I said, “I’m an actor and a teacher.” One of the officers said “Bullshit!” I told them it was true, and if they looked one block down the street there would be a billboard with my picture on it advertising my one man show. I tried to convince them that I was “one of the good ones.” They radioed to a squad car to check it out. The squad car radioed back and confirmed it. They helped me off the ground as the undercover officer said “Sorry about that buddy.” He informed me that a car that resembled mine had been stolen, and my car fit the description. It was pretty odd because at the time I was driving a 2003 Dodge Neon. Who the fuck in their right mind risks getting caught by stealing a dodge neon. As he gave me my license back, he left me with what he thought was sound advice, “Stay out of trouble.”

Nathan Yungerberg’s Hole In My Identity
I was adopted by white parents and raised in an all white, middle-class community, and outside of my never-ending identity crisis, my early life experience as a black American was extremely safe, extremely protected, and extremely dismissed. When I was as a kid, maybe eight, which was around the time that my racial differences were really starting to fuck with my head, I would try so hard to articulate my feelings to my mom and dad, but they just didn't have the experience or understanding to support me. There was this incident at school, where a kid was reading from a history book about Africa and he mispronounced the River Niger, you know how that ended, and all the kids turned towards me and snickered and my spirit just melted all over the floor. I went home that day crying and my parents responded with, “oh they didn’t mean to hurt you,” “when I was a kid, I had goofy hair and the kids made fun of me too.” And my all time favorite “Color. Doesn't. Matter.” I’m forty-three years old and I’ve never been stopped and frisked, I’ve never been accosted by the police, profiling has not been part of my experience. I’ve been imagining lately how I would even react if I ever was stopped and frisked. What would that feel like as a forty-three-year-old black man who was raised with middle-class white privilege. How the hell would that end up? I’ve been having a lot of conversations about this lately, questioning black friends about their experiences with racial profiling. I even called my parents and asked them if I ever brought up any incidents, but their memory banks came up empty too. The more I read and watched what was going on in Ferguson, and in the rest of the country, I started to feel disconnected from my race because of my inability to relate to the experiences of other black men, and it kinda made me feel like a fraud. I remember a few years ago, in Brooklyn, someone gave my partner a copy of The Little Black Book. It was a survival guide for black males in the US. He said some lady gave it to him because there were important things in it for him to know. He left it on the bookshelf, and one afternoon, I picked it up, wondering what words of wisdom were waiting inside. What I found were critical rules for the black man; what to do when confronted by the police. I put it away, because I felt like it had nothing to do with me. And that disturbed me, it really did. I was speaking with my therapist about all of this and she was shocked, not about my feelings necessarily, but about the critical pieces missing from my past. As a black woman who had raised five black boys, she was worried about me, because as she observed, I’d been dodging the bullets of societal targeting all my life, and she was concerned that I wasn't prepared, that my parents had not prepared me. The image of dodging these bullets all my life really stuck in my mind.

Political Theatre
Most Discussed
Designing Collaboration: In Search of a Taxonomy of Collaborative Methods
Emily McConnell
Most Watched
The Gathering from the CrossCurrents Festival
Wednesday 4 May to Saturday 7 May 2022
Upcoming
Livestreaming a Conversation: #DeafWoke with John Autry II
Friday 20 May 2022

I saw the show in Seattle this past Monday. It was the most powerful night of theater I've participated in a long time. By the end, all of the hairs on my body were standing on end, and I was weeping.

Thank you Keith for your vision.

These testimonies are just a few of the discussions that need to take place so that others can begin to recognize and understand that African Americans are not delusional. The s___ is real out here.